Interview With Couture Designer Yiqing Yin, New To Vacheron Constantin ‘One Of Not Many’ Campaign 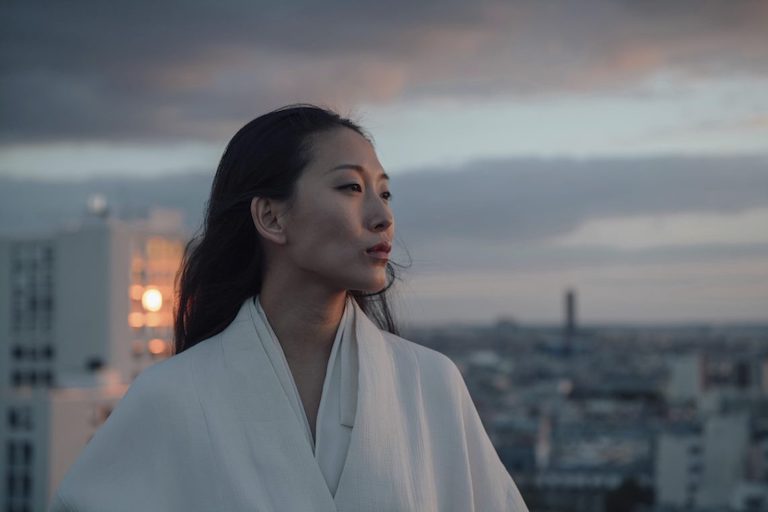 Earlier this year,  Vacheron Constantin announced that Chinese-born haute couture designer Yiqing Yin joined the brand’s fairly recently launched “One of Not Many” marketing campaign. Not an official brand ambassador for Vacheron Constantin, Yin will be the face behind the brand’s new women’s Egerie collection. Recently, I had the opportunity to interview her about her design sense and direction.

The 35-year-old Yin was born in Beijing, fled the city as a child (an interesting story) and traveled the world before creating her own couture vision that reflects global influences. Now living in Paris, Yin has received multiple awards for her elegant creations, has held multiple Haute Couture runway shows, was selected by Vogue as a “designer to watch,” and so much more. Recently, I had the opportunity to interview Yin about her design style and her take on time and how it plays a role in our lives. 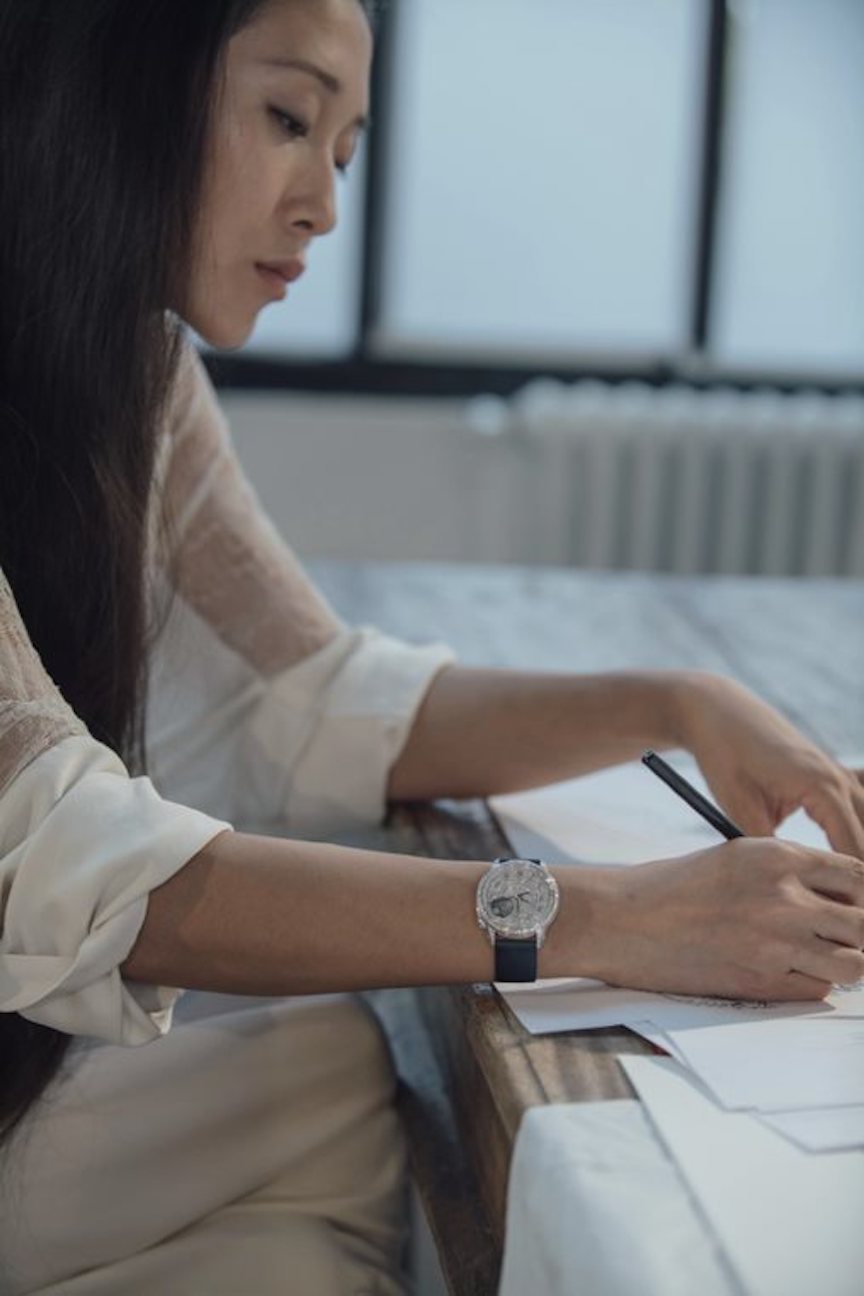 The eloquent Yin admits she was very different from others since her childhood. “I could never compromise, I always had a very stubborn view and a sense of justice. This can be a painful path as a child, but today it is an endless source of motivation,” says Yin.

It might just be that stubborn streak that helped Yin as a small 4-year-old child when she was forced to flee Beijing alone – shepherded by caretaker after caretaker on her journey to unite with her parents in Paris.  That was in 1989 just after the Tiananmen Square protests. “I had to flee China in the hull of a boat and then another boat and then flights. I was handed down from people to people that I didn’t know until I finally reached Charles de Gaulle airport where my parents were waiting for me. It was one moment that lasted many days. It was the longest moment of my life. Each new caretaker would tell me my parents were waiting at the end of that leg, but they weren’t  until the very end, so I didn’t know how long it would last and if I would ever see them. I was really terrified at the time, and it was a total loss of points of reference, of control over anything,” describes Yin.

According to Yin, those days became cathartic in shaping her creative identity. “I had come to define myself in between many places and at the edge of cultures and customs … It is through the loss of landmarks and knowledge that you truly reinvent yourself. Today, I want to be freer in my life and the way I work. The pinnacle is about freedom and learning again how to inhabit fully the present moment in order to give sense and meaning to everything you do. … It is an exercise to go back to that childlike quality we had of being able to marvel at the simplest things in life.”

Yin admits that, as it is for everyone today, the current COVID-19 pandemic has played a role in her thinking.  “I have always been very into control, into forecasting the future. But the Covid virus has made me reflect on the uncertainties and has made me re-negotiate my priorities. When you realize you really don’t need a lot to be happy, you can really make room for the things in life that are important. Then you can really be free because you have made a choice.” 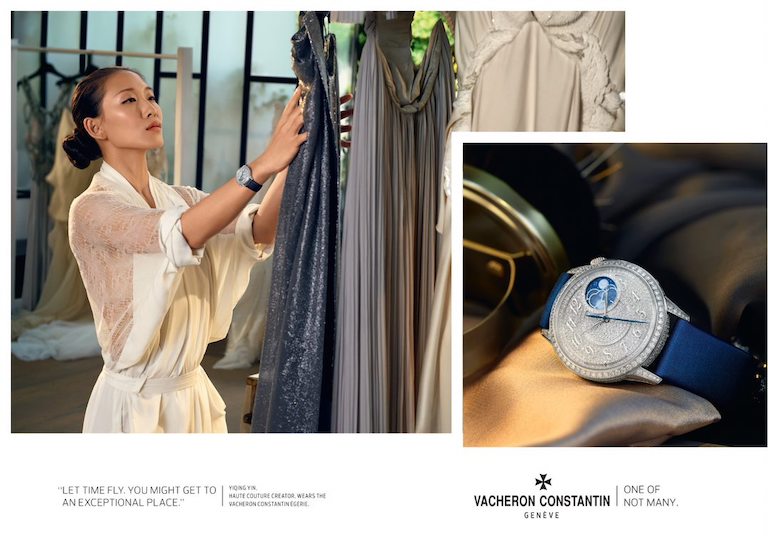 Yiqing Yin in the Vacheron Constantin One of Not Many advertising campaign.

Soft spoken but incredibly powerful in her delivery, Yin says she has also been rethinking time and what it means to her.  “It is everything. It’s the one true thing that really matters and is the most valuable thing we have to invest. Time is life, time is choice, time is freedom and it is the one true equal condition to all human beings. How you decide to invest it will decide who you are and will define your happiness,” says Yin, admitting that she has always had a love/hate relationship with time. “Time is like a tricky double-faced joker, on the one side leading the way to endless possibilities and on the other side reminding us of everything that will never be. Time is a constant negotiation. A truly determined individual is someone who has successfully negotiated the meaning of time and space in order not to lose time”

Yin describes her design style as fluid and very feminine. “I have a very artistic and sculptural approach to design, a very instinctive one. I am far away from trends and codes; I am more of sensorial wanderer. My shades and textiles, the way the fabric moves, is inspired by nature, its elements and its mysteries,” says Yin. “I have a very sculptural approach and design on a mannequin in three dimensions so it is really a crossroads between research, art and action.”

After living in Paris for about a decade, Yin and her family moved to Australia. She says her many travels made for an enjoyable childhood and the places she saw and things she experienced helped to shape her relationship to clothing.  “Clothes are very personal. Clothes represent your identity, … they give you a voice when you cannot speak the language. So very early on, I had the instinct that by returning to my clothes I found myself again… Clothes are the first habitat or architecture for the body and the spirit.”

According to Yin, her biggest challenge in business was finding the time to not only build a company and have a rational mindset, but also to have the state of being required to create. “I need to wander off and get lost in time and space, to lose control of reality to wander in new directions and possibilities,” says Yin, who admits she tries to step outside of her comfort zone all the time and take risks in her life and her creative direction.  “I like to create a memorable poetic shock, to bring out a unique emotion for people. For me, design is about having something unique and raising uncommon journeys and challenges in order to shape an exceptional identity, one that is different. It is about thinking outside the box in a relentless pursuit of freedom and intellectual independence. There is a liberty in forgetting what I know in order to find a new vocabulary.”

This is the first time Yin has partnered with a watch company as the face of a watch, but she is enthusiastic about the relationship. “A watch is not something we need because we have a phone or other device to remind us what time it is,” says Yin, who admits her favorite Vacheron Constantin Egerie watch is the automatic moon-phase version. “A watch is more of a symbolic approach to time. … A good watch can really make an outfit complete, it adds an element of aesthetics to our wardrobe and brings definition, character and elegance to what you are wearing, even if it is only jeans and a tee-shirt. A watch should be an authentic extension of our attitude and personality.”

Yin admits that, like many artists, she has made mistakes. “I would say the biggest challenge is to keep my head in the clouds but my feet firmly on the ground.”

So, with her feet strongly on the ground, what advice would she give to young designers?  She draws on her own past experiences and mistakes for that answer.

“Don’t try to take into consideration everybody’s wish. You can’t do that. Listen to your generation, be their voice and their witness  and be at the service of their wishes. Be truthful, genuine and inclusive  – because being a designer is really to be at the service of people and  we can’t forget that,” says Yin. “Rules and codes are here to be hijacked and challenged, and when you have a dream, just do it. Don’t over think it or you might lose the sharpness and strength of it.”

(This article written by Roberta Naas first appeared on her Perfect Timing column on Forbes.com)