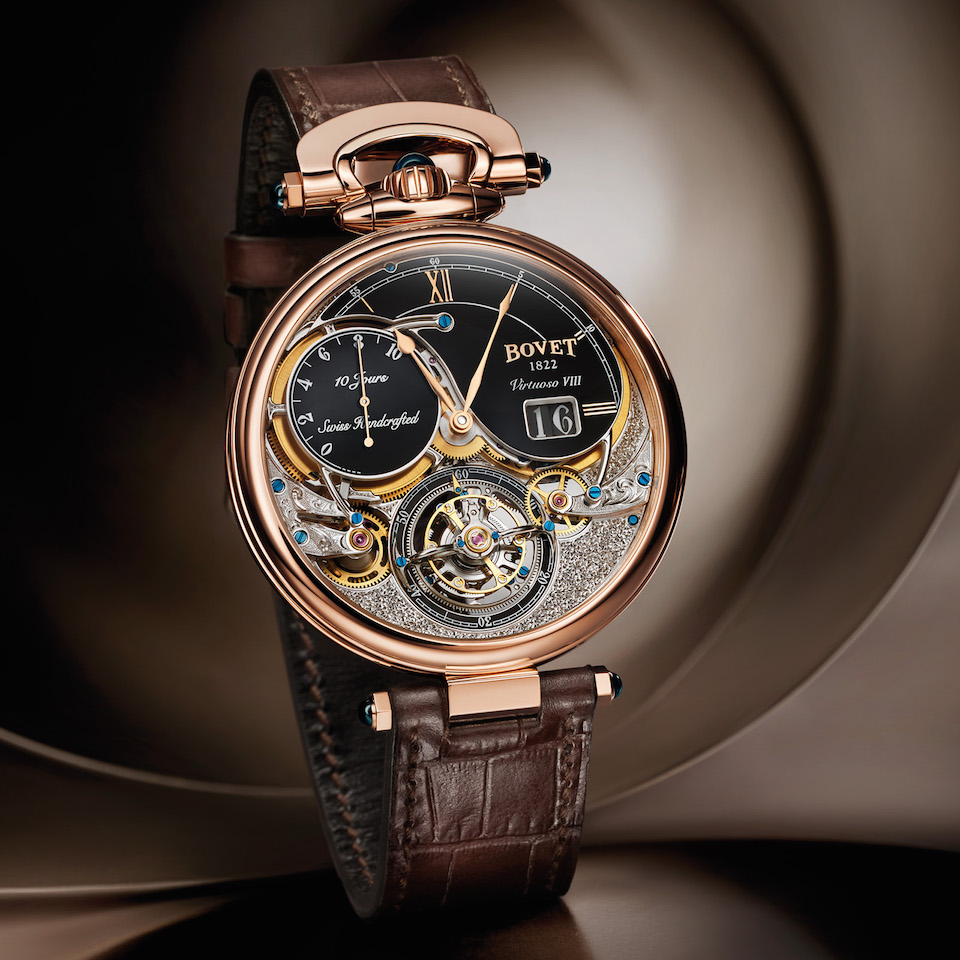 This year marks a big one for Bovet 1822. Celebrating its roots, that date back 195 years, Bovet 1822  unveils the Virtuoso VIII — a Big Date 10-Day Flying Tourbillon that deftly blends fine watchmaking heritage with  a contemporary spirit and holding three patents. While this company was started in 1822 by the Bovet brothers,  owner Pascal Raffy bought the brand and brought it back to life in full glory in 2001 and has never swayed in his determination to restore the traditional arts and elevate the chronometric precision of watchmaking.

Part of the Fleurier Grandes Complications collection — and the eighth in a series of watches that have,over the years, stolen hour hearts with their grandeur —  the Virtuoso VIIII will be produced in a very limited series — with just 78 movements being made.  Exactly 39 of these movements  will be housed in an 18-karat white gold case and 39 in an 18-karat rose gold case. A platinum case may be available via special order. Each watch is offered with a  dial choice of aventurine, or black or ivory lacquer.

This Fleurier case, however, is no ordinary case. The Virtuoso VIII features an inclined case and crystal similar to the innovative case of the Récital 18 Shooting Star® that was shown in 2016 and that of this year’s Récital 20 Astérium®. This case and crystal design leaves much room for innovation in terms of caliber architecture,  decoration and display of functions.

What’s Inside the Bovet Virtuoso VIII 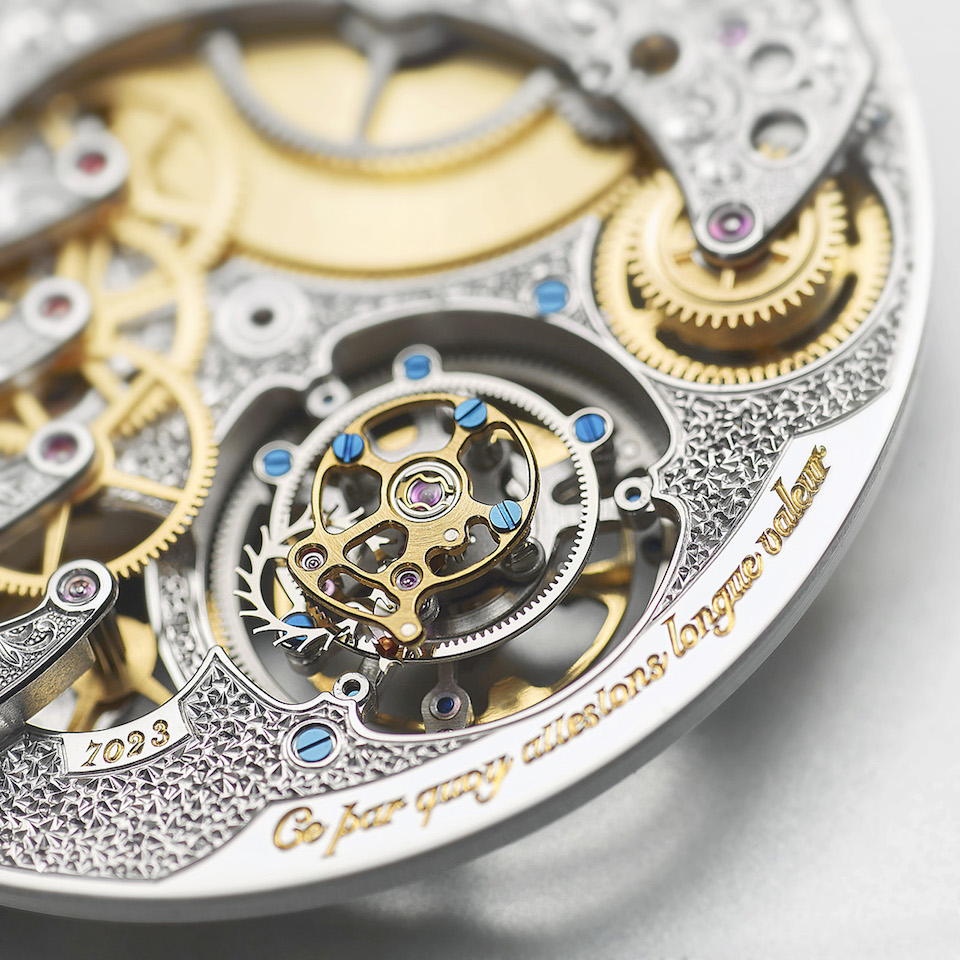 The innovation demonstrated in this watch goes far beyond the 44mm case and crystal architecture. The movement features a number of significant milestones and houses three of the patents that were originally pioneered by the Braveheart® Tourbillon: Spherical winding; Double face tourbillon; Tridimensional toothing with multiple gearing.

The energy of the hand-wound 17BM03-GD caliber, which offers 10 days of power reserve and beats at 18,000 vibrations per hour, is equipped with  a single barrel. The flying tourbillon’s groundbreaking structure offers top-notch chronometric performance. This patented double face flying tourbillon features a fixed point in the center of its axis that offers  balance and reduces friction.  As previously mentioned, the seconds indication is also on the tourbillon. 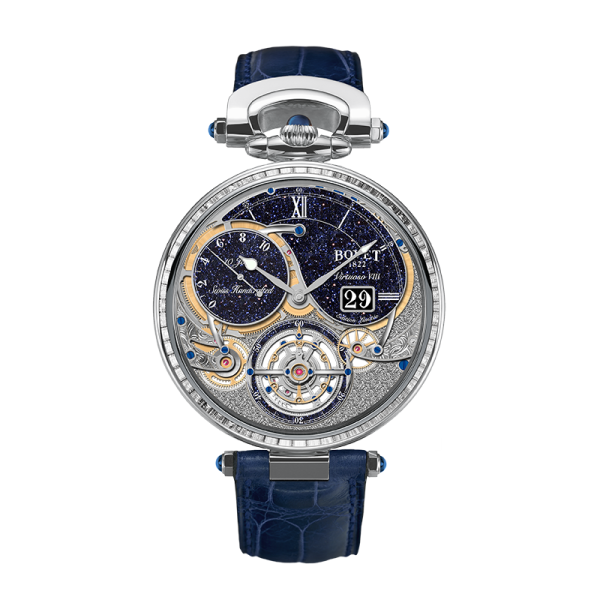 One of the dial choices for the Bovet Virtuoso VIII is aventurine.

To further improve the performance of this tourbillon, a new regulating organ has been developed and the pace of the new caliber is set by a variable inertia balance wheel. Six collets in the balance wheel allow for ultra-precise setting. The balance-spring has been specifically calculated for this caliber and is fixed to the tourbillon bridge by a double-ended mobile balance-spring stud support.

Finally, it should be noted that accomplishing a 10-day power reserve using just one barrel would ordinarily require extensive winding, however that is not the case since the barrel is coupled with a spherical differential. AS mentioned earlier, the application of this ingenious mechanism and of the tridimensional toothing with multiple gearing of one of its pinions hold two patents. 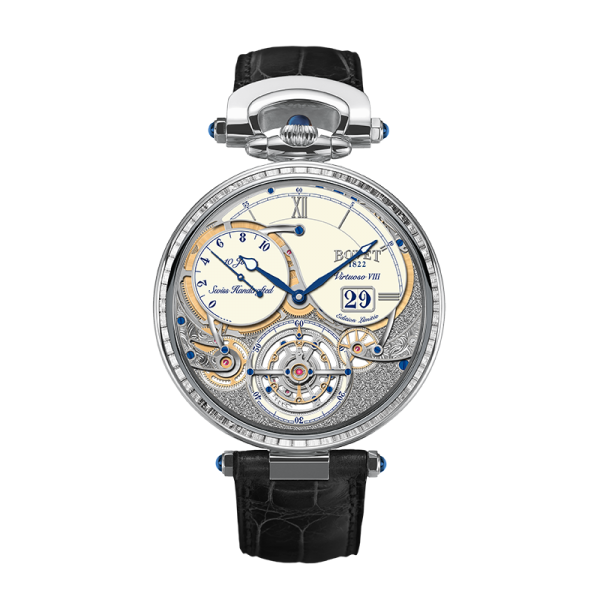 Bovet Virtuoso VIII is offered in 39 pieces in rose gold and 39 in white gold, platinum on request.

Moving beyond chronometry and precision, Pascal Raffy of Bovet, The design of the movement is akin to 19th century watches, with a full plate and bridges that are hollowed out  and magnificently scroll worked. In fact, the entire design and decoration of the caliber of the Virtuoso VIII are the ultimate blend of historic decorative arts and modern majesty.  The steel is chamfered and polished. The disk plates are sunk and chamfered. The bridges are decorated with the emblematic Fleurisanne engraving and the two sides of the plate are  chiseled with an extremely delicate pattern by the Manufacture’s engravers. The bridge of the tourbillon carriage is crafted in titanium for lighter weight and to eliminate any possible magnetic charge. These two elegant arms are rounded-off and highly polished.

The dials of the watch are equally as beautiful. Each watch featuers two dials on the upper portion of the watch that allow for viewing of the stunning movement on the bottom portion of the watch.  The first dial — an irregular shape at 12:00 and stretching to 3:00 —  indicates the big date, hours and minutes. The Big Date was designed in such a way that its mechanism occupies the smallest possible surface area on the dial, while still displaying as big a date as possible. The second dial at 10:00 showcases the power reserve. 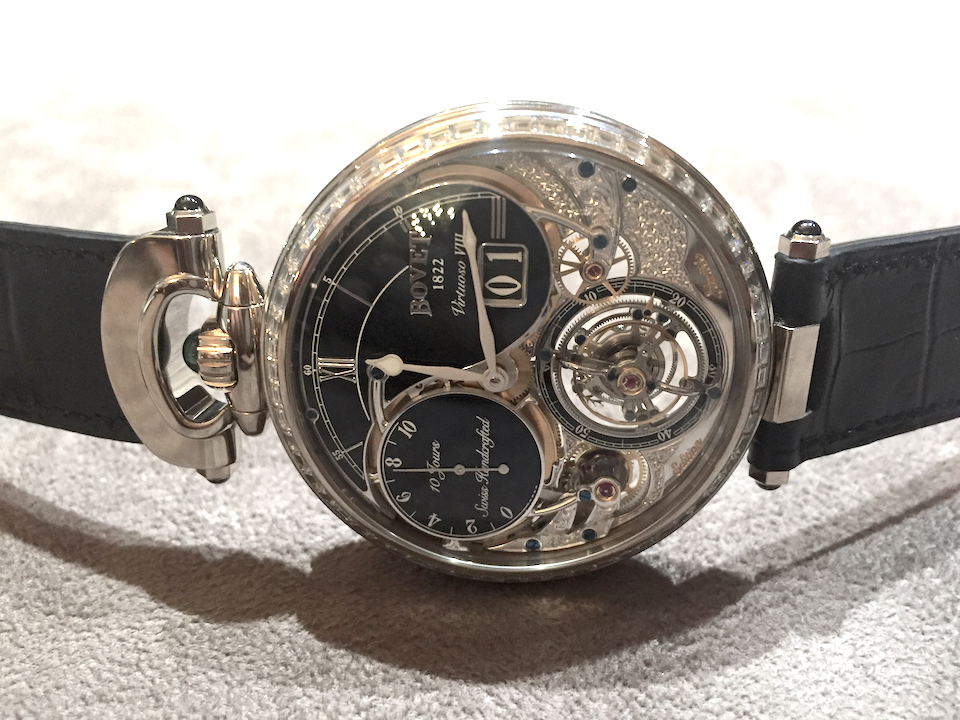 Each component of the Bovet Virtuoso VIII is meticulously hand finished.