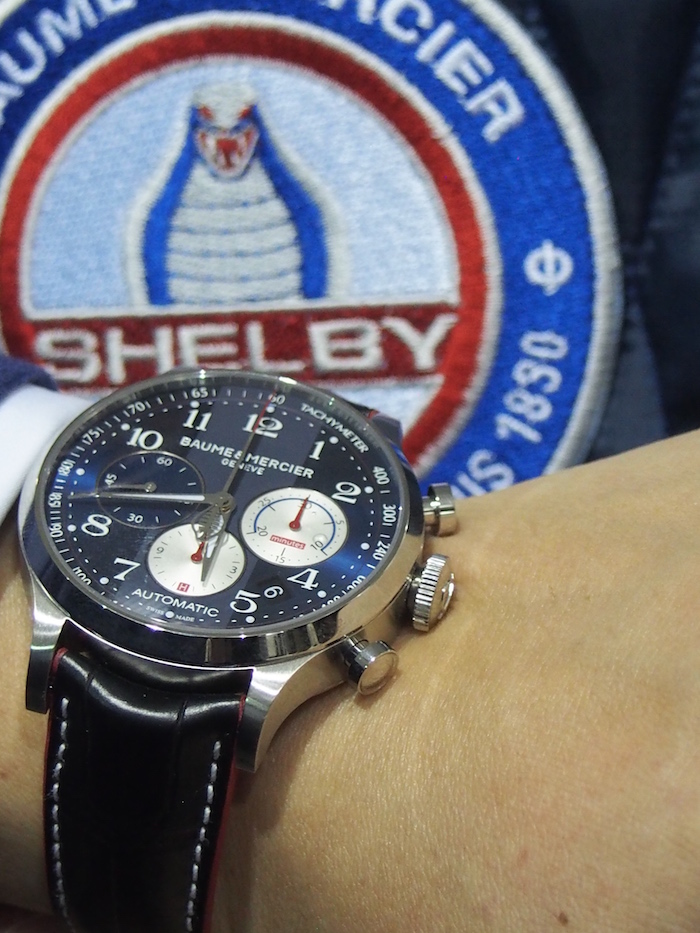 Now that the timepieces are out on the market, I am fully free to write about one of the most exciting and exhilarating watch trips — a trip with Baume &Mercier to celebrate the 50th anniversary of the legendary win of the Shelby Cobra (with a massive 427 cubic inch Ford V8 at its heart) over the famed Ferrari at the 1965 FIA Championship.

For many, this might not sound like the trip of a lifetime, but for me — having lived, breathed and, yes, driven a few great muscle cars on the race tracks in my teenage years – it was an incredible opportunity to get behind the scenes with Shelby Cobra, to visit the Las Vegas Shelby American Manufacture and the Spring Mountain Race Track, when it was all about the 50th anniversary of the Cobra victory.

You see, the story of Carroll Shelby – and what he and his team accomplished — is easily one of the most inspiring in American racecar history. These passionate men had a dream, pursued that dream and brought it to reality over the course of several years and several great losses– making a true mark in history. 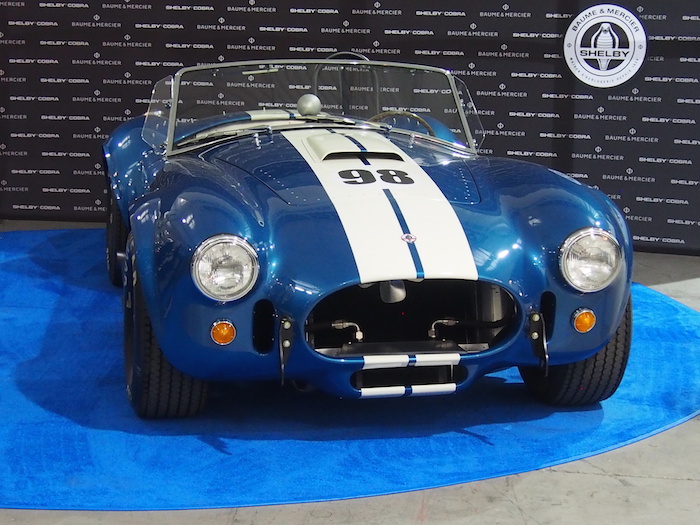 I can’t wait to bring you more news about the events of that trip, and about the legendary men I got to meet and talk to – men who were responsible for bringing the American muscle car to world renown. But for now, I want to set the stage as to why I was there. It was to get the first sneak preview of the watch that hits the pure heart of American racing lore: the new Baume & Mercier Capeland Shelby Cobra. The watches – which are in stores now – celebrate that famous race 50 years ago.

“Baume & Mercier has always been about celebrating life’s special moments,” said Alain Zimmermann, CEO of the brand, while standing with several of the living legends who made that success happen. “We are proud to be a part of this special occasion and to bring the venom of the car to the watch.” 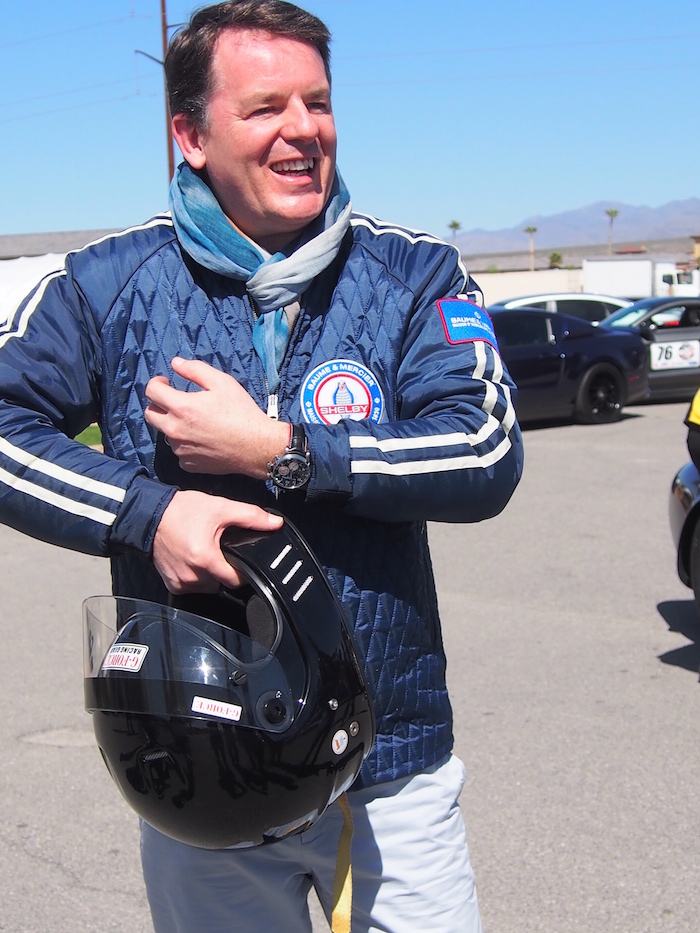 The new Baume & Mercer Capeland Shelby Cobra 2015 Limited Edition watches not only pay homage to the 50th anniversary of the victory a the FIA International Championship of GT Manufacturers, but also embrace the sleek lines and bold beauty inherent in the power-house car. To create the new line, for which Baume & Mercier worked closely with Shelby American, the brand turned to its beloved Capeland case, which was also inspired by a vintage piece (a 1948 mono-pusher chronograph in the Baume & Mercier museum).

The round, sophisticated 44mm case is the perfect vehicle for the mechanics.  From there, the rest of the laps involved in bringing the watch to fruition involved  pure attention to detail and precision – much like the cars themselves. Two limited-edition models are being offered: a stainless steel chronograph, and an 18-karat rose gold flyback chronograph –each of which deftly embodies the spirit of the Cobra. 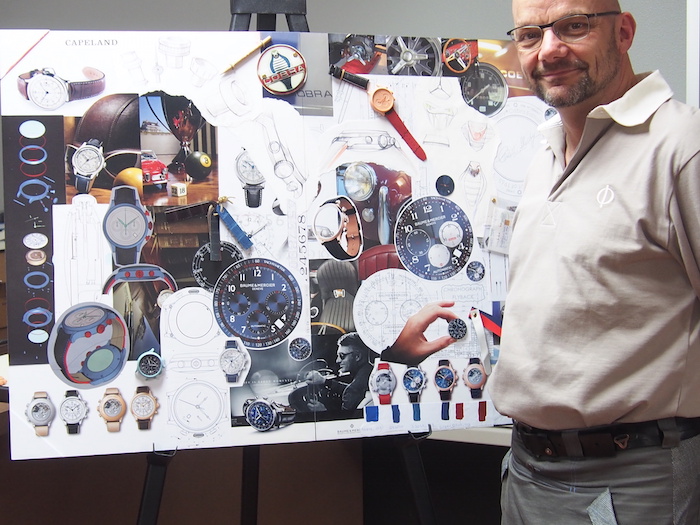 The stainless steel chronograph, with a polished and satin-finished case features specially crafted hands inspired by the Cobra steering wheel, and an incredibly eye-catching Cobra logo at the end of the red-tipped seconds hand.

The dial is created in rich Shelby Guardsman Blue racing color with SuperLuminova blue emission for a soft glow. The dial also features barely visible double racing stripes through it. The chronograph subdials are designed to recall the 427 Cobra’s dashboard and are silver with red hands. Even the tachymeter scale on the outer rim of the dial is in bold red. The numerals are stylized and typical of the era. The automatic watch is powered by a Swiss-made self-winding 25 jewel LaJoux-Perret 8120 movement, and the entire body is finished with a matching blue alligator strap that is lined with bold racing red. Just 1965 pieces will be made of this watch to honor the great win, and each will retail for $4,450. 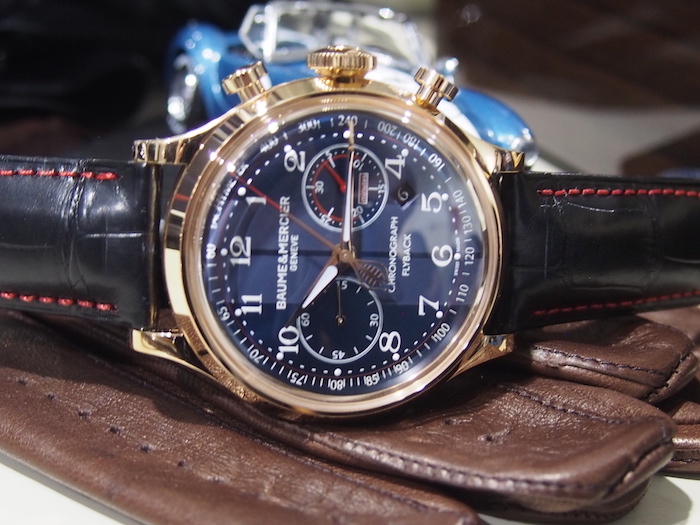 The 18-karat rose gold version of the Capeland Shelby Cobra is created in 98 pieces (in honor of the car’s number).

The 18-karat 5N rose gold flyback chronograph version – fitted with a Swiss-made self-winding Dubois-Depraz movement—is created in a limited edition of just 98 pieces (in honor of the winning car’s number). It features a transparent sapphire caseback engraved with a personal signature of Carroll Shelby. One of the super cool reasons to run out and buy this $19,950 version (in addition to the fact that it is just so beautiful): purchasers of this model will receive a complimentary driving experience at the Spring Mountain Race Track in Las Vegas.

“In every life, there are rare moments that define who we truly are, and what we have set out to accomplish,” writes  Zimmermann on the book jacket of the recently published book, Shelby Cobra: 50 Years. “They are timeless in every regard, destined to live on forever as witness to the triumph of human will and spirit.”

Indeed, the legendary Carroll Shelby — a young visionary driven by the desire to build the best — changed the course of auto racing history and succeeded in a moment that was destined to live on forever.

For a bit of background on the massive accomplishment celebrated herein by Baume & Mercier, we bring you an excerpt from an article we posted on Forbes.com. 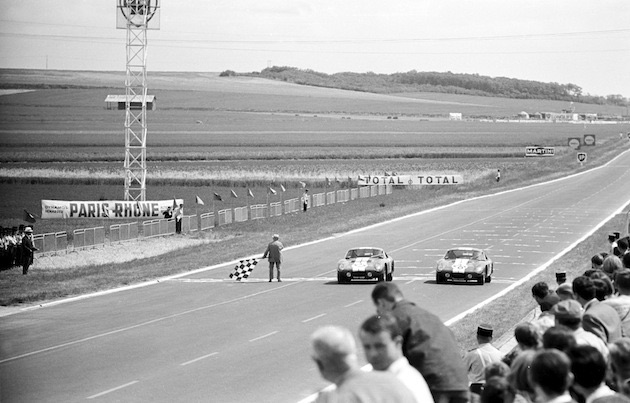 Carroll Shelby — a racecar driver with a bad heart – was forced to stop driving for health reasons, but never lost his incredible passion for the sport. To this day he is the only man credited with achieving fame as a racer driver (with16 US and international speed records to his name in 1954 alone), a team manager and a car manufacturer. In fact, once he stopped racing, he started building the American dream — the legendary Shelby Cobra.

The Shelby Cobra, and the derivative aerodynamic Daytona Coupe Concept were several years in the making – with a host of races, crashes and developments along the way. Finally, after winning a host of titles in American racing from 1963, on, Shelby convinced Ford Motor Company to jump on board (Shelby eventually took over the entire Ford GT program) to fund the project for the big FIA Championships. In 1965, the Shelby Cobra made history when the cars raced on the European circuit – overtaking the heretofore-unbeatable Ferrari. The Shelby Cobra had started as a small block 260c.i. V8, which was eventually swapped for a monstrous 7.0L 427c.i. V8 that the team shoehorned into the tiny British-born AC body. The little rocket could reach a top speed of more than 185 MPH. 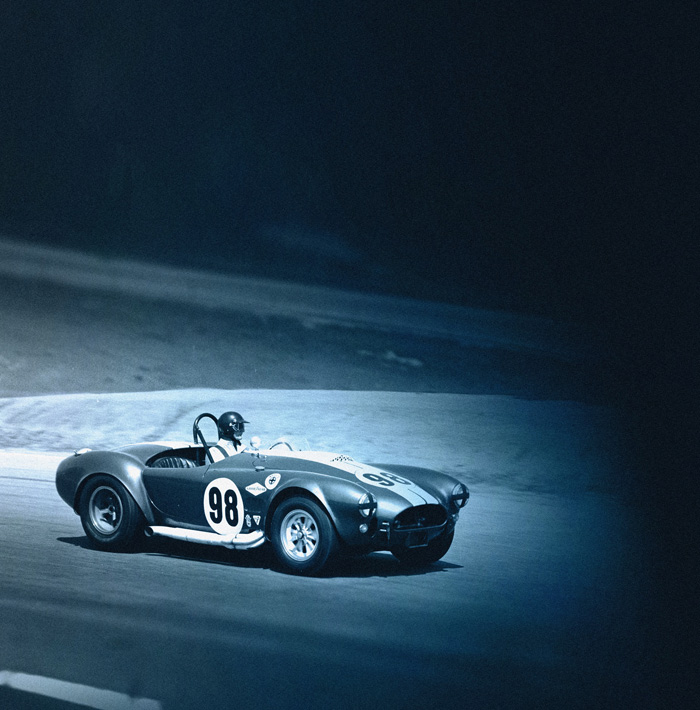 In fact, what the team of American racers and builders discovered after putting this higher horsepower engine into the car, was that their car was so fast that it was fully capable of beating the Ferrari. So, to win the record speeds, in the 1965 FIA International Championship (GT Manufacturers) race in Enna, Sicily, the team slowed the engine to conserve on fuel. When the other cars had to make a pit stop for gas, the Shelby Daytona continued ahead – breaking the record and making history.

The multi-year journey from beginning to build and achieving top status all seems well planned, but the long story of how this win came to be, and how the incredible Shelby Cobra cars evolved, is one of trial and error, of hope and passion, of determination and quest for excellence. The men behind this American racecar, this American win, have all become legends in time. Their achievements – credited to Shelby as the innovator – changed the American racecar landscape forever. 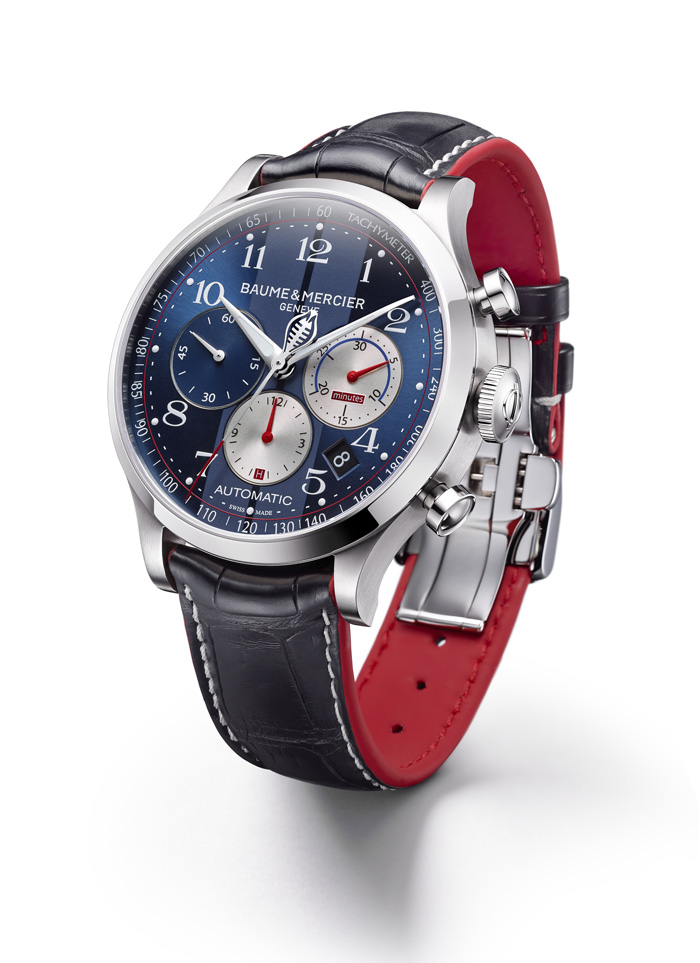 Stay tuned for more about the team – the drivers, the creators and designers.