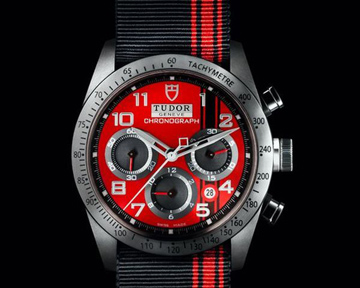 We heralded the coming of this sister brand to Rolex since March. Well now, the eagerly anticipated, Tudor is here. Last night the launch event for Tudor was held in New York at the ultra-modern, Frank Gehry-designed IAC Building in Chelsea.  The evening witnessed a gathering of who’s who in the watch world—from collectors to retailers, watches writers and VIP friends of the brand, along with some amazing timepieces and strong announcements.

In fact, while Tudor has been associated with motorcycles for a few years (read below), last night the brand announced its partnership with The International Motor Sports Association.  For the next five years, Tudor will be the entitlement partner of what will now be known as the Tudor United SportsCar Championship. This extend the relationship with motorsports that started in 1959 with Rolex. 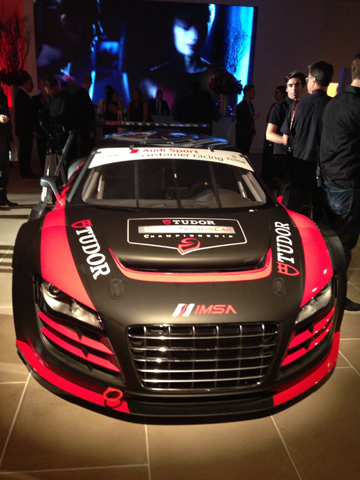 According to Tudor Brand Manager Russell Kelly,  “This new partnership between TUDOR and IMSA allows us to elevate our commitment to sports car racing. This is the perfect alignment between partners dedicated to performance and precision.”

In terms of product, tonight’s launch witnessed the release of the much-anticipated Tudor Fastrider Black Shield, as well as the Tudor Heritage Chrono Blue (which heralds sailing), the Heritage Black Bay (based on the 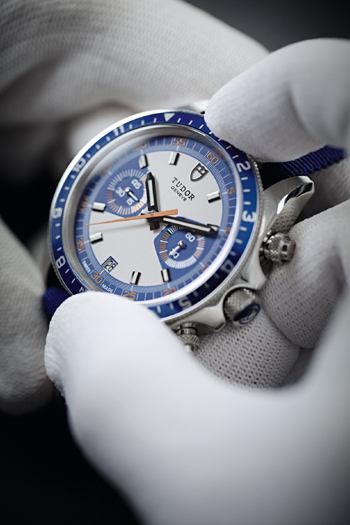 brand’s success in Greenland on the wrist of Royal Navy sailors since 1954), and the Tudor Pelagos (which plunges 500 meters deep thanks to its helium escape vale and titanium middle case).

The Fastrider Black Shield, though, is the hottest piece – as it celebrates another of Tudor’s key involvements: motorcycle sports. The brand is known around the world for its global relationship with Italian luxury motorcycle manufacturer, Ducati. In June 2011, Tudor became the Timing Partner of Ducati, reinforcing the watchmaker’s modern sporting positioning.  The commemorative watch collection Fast Rider was launched in 2011 to honor the partnership. The line consists of mechanical chronographs inspired by the design of the bikes and dedicated to measuring high-speed racing. 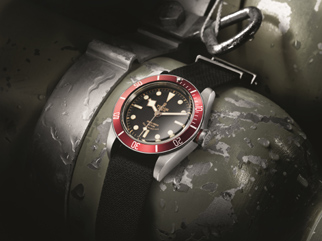 Tudor Fastrider watches are available with a leather strap, steel bracelet, or black fabric strap with three, contrasting, racing stripes, which have now become one of TUDOR’s distinctive stylistic features. The sporting spirit of these chronographs is underlined by the pushers that feature two black PVD-coated cylinders, reminiscent of engine cylinders, and by the tachymeter scale engraved on the bezel. The newest Fastrider uses Ducati red in the vertical stripes of the strap and on the dial, in pleasing contrast to the black of the fabric and totalizers. To accompany this launch, Tudor, in collaboration with Ducati, has customized a one-of-a-kind Diavel Carbon motorcycle with a matte black finish and signature red details. The entire Tudor line retails for between $2,500 and $5,000.