It’s not too far off: November 8th is when the 17th meeting of the Grand Prix d’ Horlogerie de Genève, GPHG, will take place. For those unaware, the GPHG is the organization and annual watchmaking award ceremony where different watches are recognized for various feats of horological wizardry. Think Academy Awards but for watches. Six watches across twelve categories have been preselected to compete for top honors.  Here we bring you a look at the six top Sports watches.

Before we delve in to this first in a series of top watches pre-selected for the GPHGH, we want to bring a few things to your attention. The final six watches pre-selected by a jury, and from which the finals will be announced on November 8, is not a comprehensive look at the entire watch industry in any category. Many top watch brands opt not to submit their timepieces for consideration. Still, this is one of the largest – if not the largest – watch awards presented annually. Also, over the course of the next several months leading up to the GPHG, we here at A Timely Perspective will present a deeper dive into the majority of the categories and offer our expert impressions on who may be the finalists. 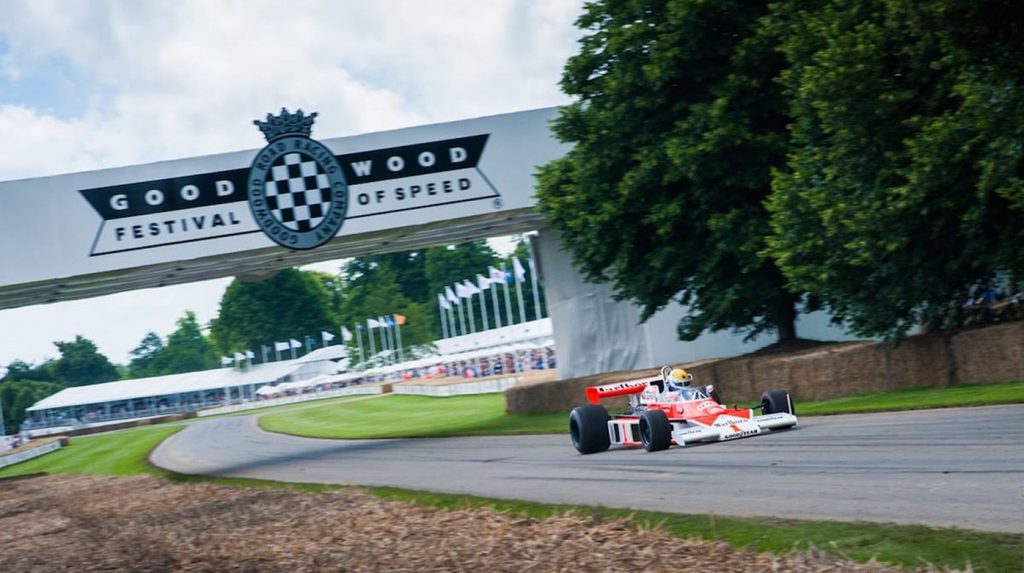 Top Sports Watches of 2017 to be judged at GPHG

GPHG defines sports watches as pieces linked to sports whose functions, materials and/or design are suited to physical activities. For this year’s entries there is great variety from a price standpoint, with the affordable Tudor Pelagos LHD retailing at $4,400, as well as the Hublot Techframe Ferrari Tourbillon, which retails north of $100,000. Each watch in the category has a story to tell and some offer  usefulness under water, in the skies, on land and on the water. 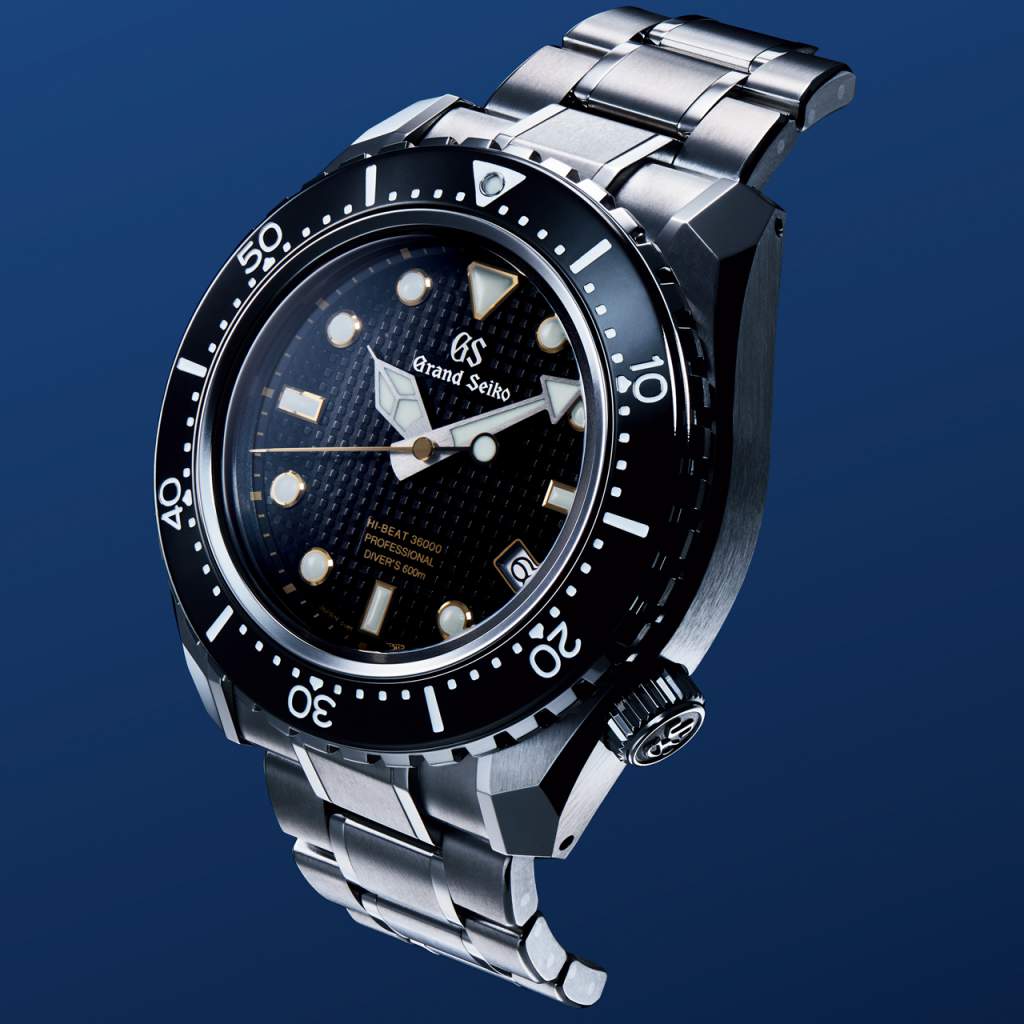 The Grand Seiko Hi-Beat 36000 Professional 600m Diver’s is truly the professional’s professional divers watch. Water resistant to 600m, the antimagnetic piece comes in a highly durable titanium case and bracelet. Meant for situational diving, the watch features valve-free helium resistance and the ruggedness does not sacrifice accuracy: it is precise to -3 to +5 seconds per day. The dial of the watch is highly legible, with custard lumes, large hour and minute hands and off-center date indicator at the 4 o’clock position. Retail: 10’990 CHF. 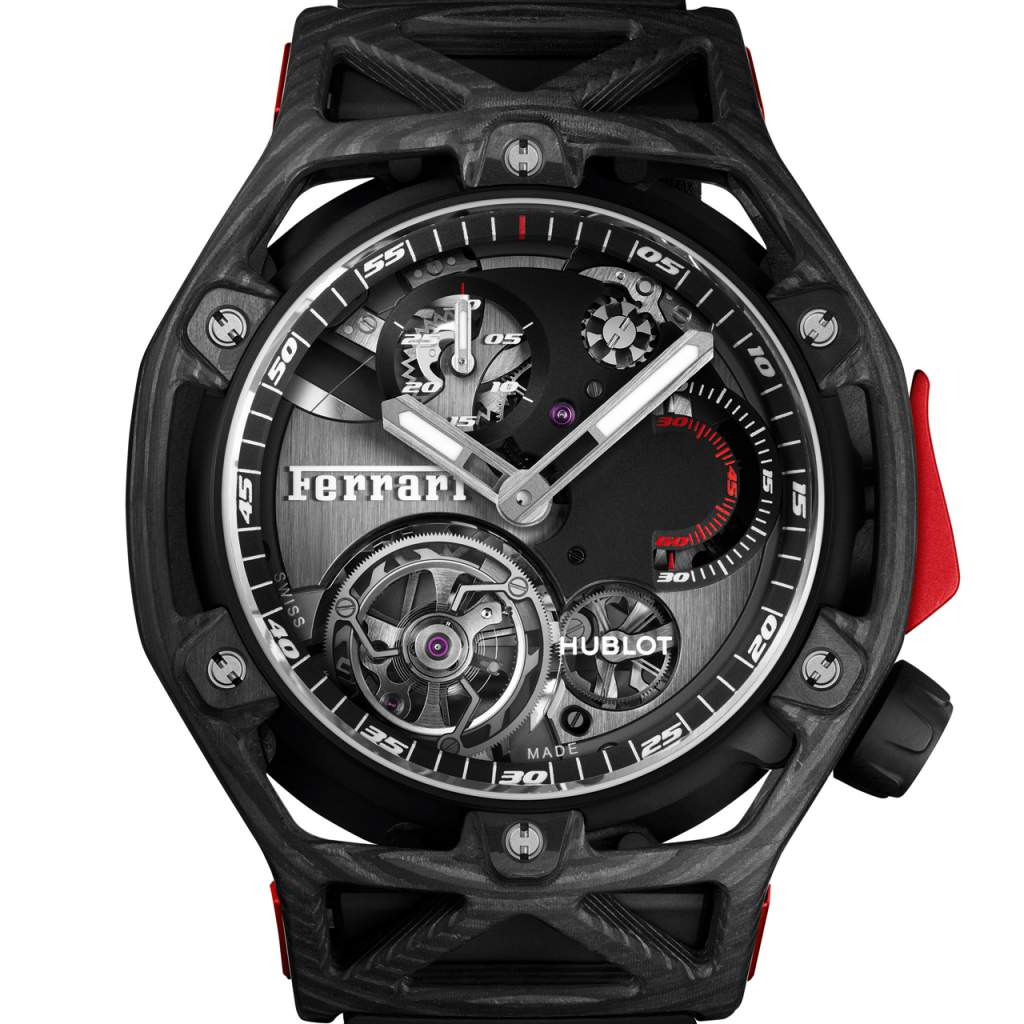 The all-new creation is a celebration of Ferrari’s 70th anniversary and, as the title states, the watch features tourbillon and chronograph complications. Hublot has crafted three iterations of the anniversary piece: King Gold, Peek Carbon, and Titanium — with only 70 of each will be produced. The collaborative watch offers a Ferrari-inspired design. The black structure on the dial holds the components of the chronograph counter. The red pusher is placed in an ergonomic location so that the complication can be triggered by the driver even while traveling at high speeds. Finally, the prancing horse logo emblematic of Ferrari has been placed at the crown in the 4 o’clock position – to help reduce the size of the watch. The manual winding HUB6311, comprised of 253 parts and packed with a robust five days of power reserve, powers the watch. The Tourbillon offers the look and impression of a flying Tourbillon and stability of a tourbillon with two points. Retail: 120’370 CHF. 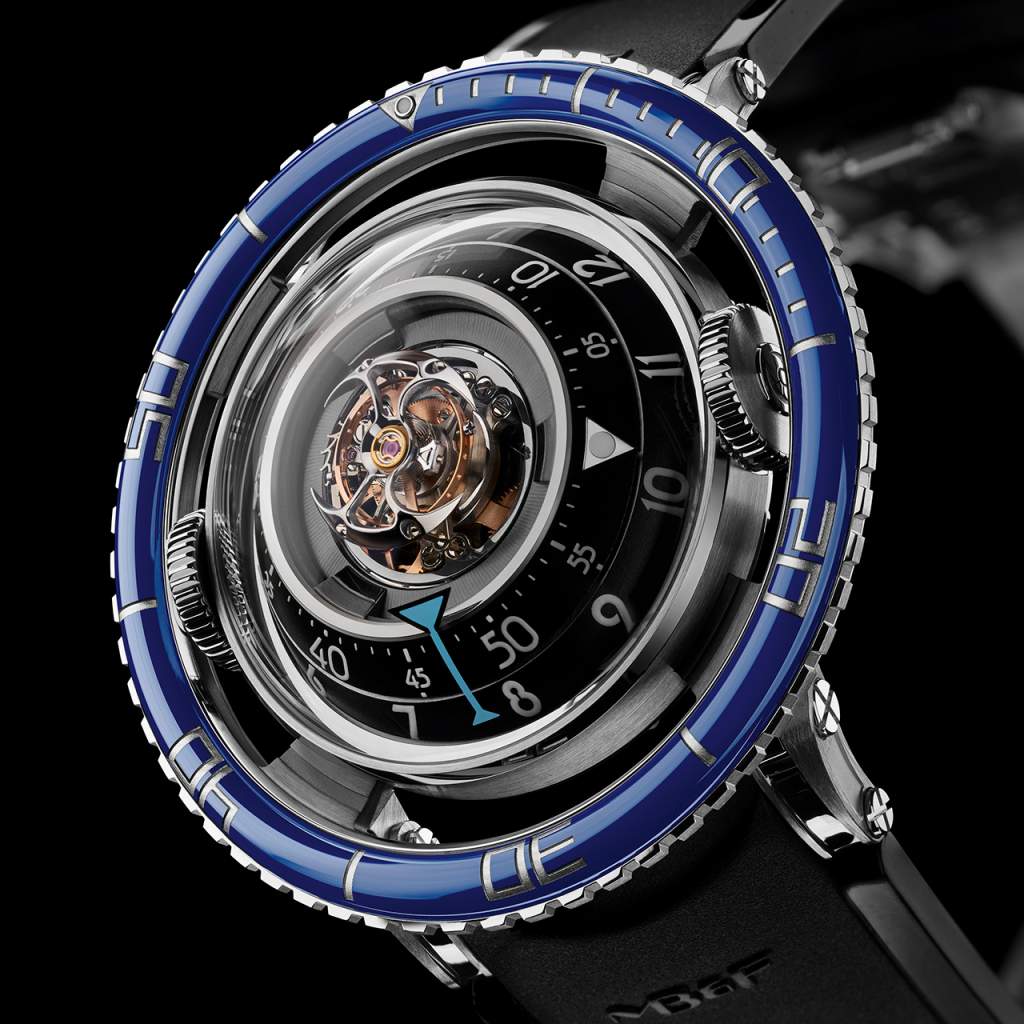 For the MB&F Horological Machine No. 7 Aquapod, the manufacture was inspired by the jellyfish. The inspiration is dramatically apparent when the piece is viewed side on. The domed crystal and band of the watch immediately trigger images of the gelatinous aquatic animal. The theme is consistent throughout the creation and inner workings of the piece. The symmetry of the jellyfish is mirrored in the proportions of the watch. The winding rotor of the piece features tentacle like design. Additionally, the rings of neurons that comprise the brain of the jellyfish serve as the design inspiration for the rings that display the hours and minutes. The marine animal mimicry is even extended to the flying tourbillon that regulates the power generated by the motor. In keeping with the aquatic theme, MB&F has included a rotating unidirectional bezel that is not attached to the case, but instead floats apart, similar to a buoy. Finally, what would a jellyfish inspired timepiece be without capturing the bioluminescence for which they are known? The Aquapod hasbeen given a good amount of Super LumiNova treatment. The hours and minutes, as well as the inside of the movement, provides light to the tourbillon and winding rotor. Retail: 98’000 CHF. 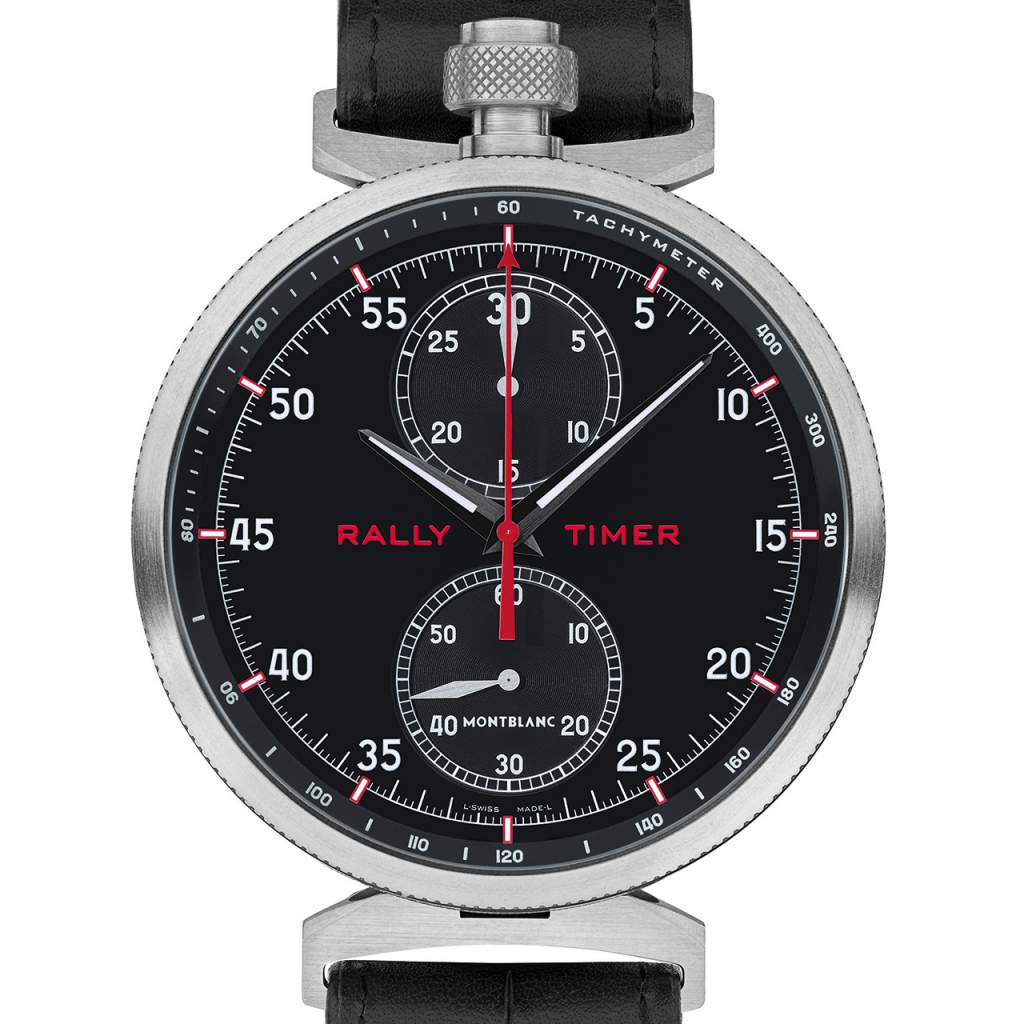 The TimeWalker Chronograph Rally Timer we covered extensively here at ATimelyPerspective several times because of its craftsmanship and caliber. The Rally Timer is a vintage inspired piece that has its roots in vintage racing. The piece can serve as a wristwatch with a monopusher chronograph or as a pocket watch. The case back is inspired by the grill of a car and the hands and markers are highly legible to be read easily while driving at high speeds.  In keeping with the racing aesthetic, the 30-minute chronograph moves along a tachymeter dial to help time laps. The 50mm case of this stunning watch is convertible from wrist, to pocket watch and dashboard watch. Retail: 33’240 CHF. 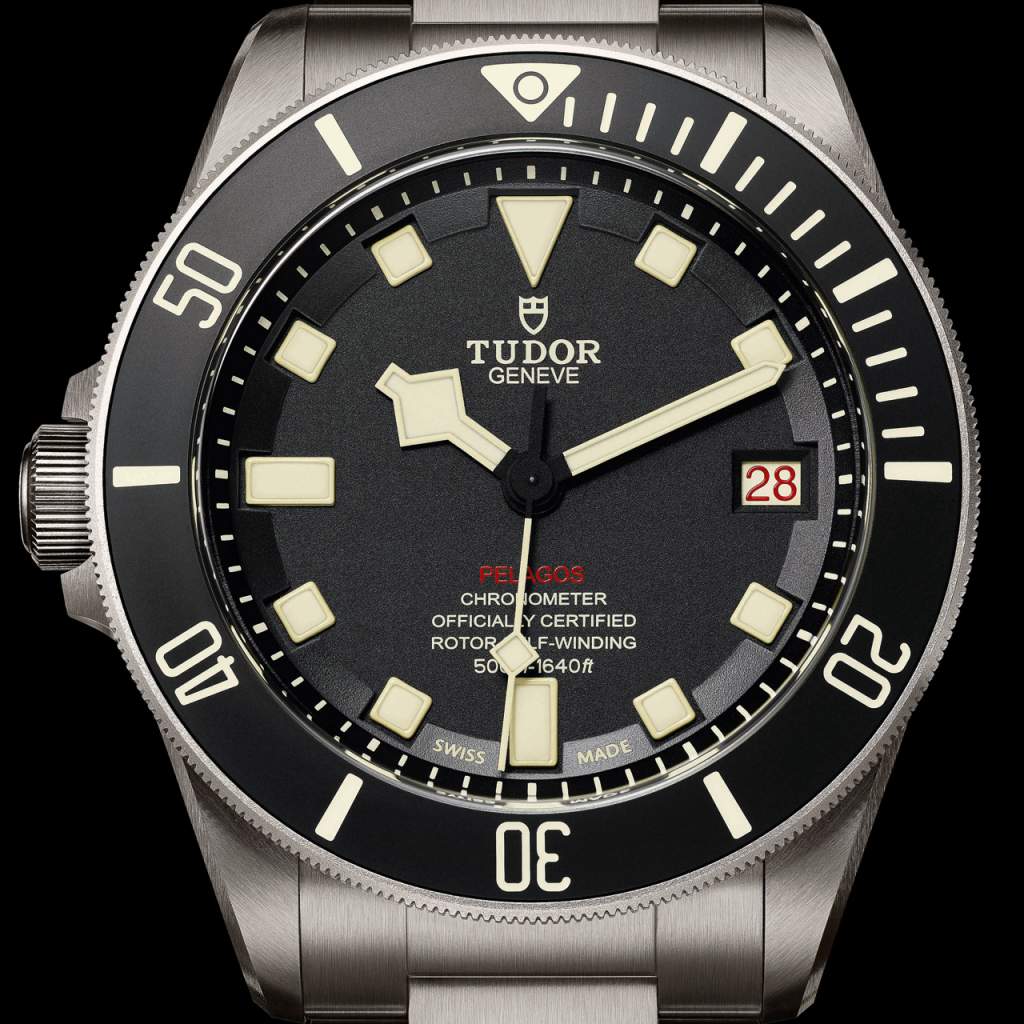 The Tudor Pelagos is the lefties’ dream come true. The winding stem is on the opposite side of the watch allowing it to be worn on the right wrist the same way as righty would wear a watch on their left wrist. The creation is a nod to the past when Tudor created these types of pieces for the French navy in the 70s. The ergonomic design served true functionality purposes and allowed left handed military dive specialist to more efficiently do their jobs. The vintage inspiration is also apparent in the custard lumes, hands and bezel markers. The case is done in titanium and the watch also boasts anti magnetic properties. The Pelagos is water resistant to 500m but has been tested to 125% of its depth rating and can go deeper if need be. Additionally, the deep dive watch also features a helium escape valve. Retail: 3’889 CHF 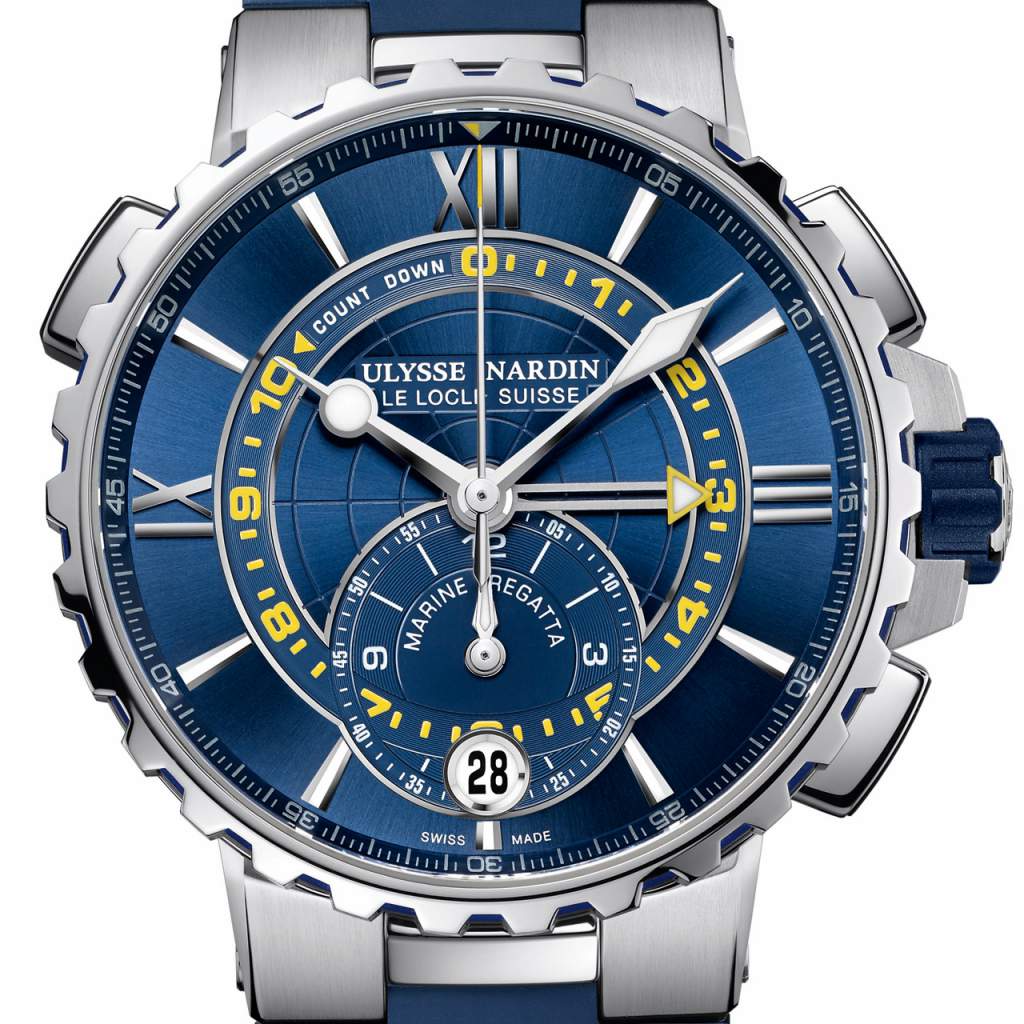 In partnership with Swedish Artemis Racing team for the America’s Cup earlier this year, Ulysse Nardin has created a unidirectional regatta timer. The Ulysse Nardin Marine Regatta  is meant to be both elegant visually and durable enough to withstand the rigors of America’s Cup. The chronograph is meant countdown the time before racers cross the starting line. For the ‘Fleet Race’ which is marked by buoys, starts with five, seven or ten minute countdown. At the end, the yachts begin their race. The goal of each crew is to get as close as possible to the starting line prior to the start of the race. What makes this watch so revolutionary is that it can be set from 1 to 10 minutes for the crucial countdown to the start of the race, but also is equipped with an innovative bi-directional seconds hand that immediately following the conclusion of the countdown automatically starts moving in a clockwise direction and begins timing the race. The water resistant piece measures 44mm and is water resistant to 100m. Retail:  15’900 CHF

Gordon Henderson: This is an interesting category. As I mentioned earlier, a sport watch is designed around durability and rugged endurance. Outside of the Pelagos, the price points of the pieces would prohibit me from wanting to bring any of them into extreme environments. Nevertheless, my vote for the category: I like value and finding the most bang for my dollar. My vote is for the Tudor Pelagos. The value is unquestionable and the buyer is provided with a bevy of quality features such as an in-house movement, titanium case, bracelet with micro adjustments, helium escape valve, antimagnetic properties and vintage aesthetics. I think the watch caters to a group of people often neglected, left-handed watch wearers, and really delivers a solid product and interesting story.

Roberta Naas: While I like Gordon’s assessment, my vote is not for the Tudor at all. Also, while I love the Montblanc for its  vintage styling and convertible watch status, I think I have to go with the Ulysse Nardin Marine Regatta watch because this piece — while destined to be coveted by only the sailing world — offers a truly unique and highly functional regatta countdown function that then automatically begins timing the race. This defines the sport watch category: functional, high-tech, rugged.