Timothy John’s collaboration with Montegrappa for the Tulip for Team Fox writing instruments is all about raising awareness and funds to fight Parkinson’s Disease.

It’s a new year. Today, January 1, 2020, we break from the first two decades of the 21st century and start anew — a third decade. We are making history. Never before has there been a January 1, 2020, and never again will there be. To start the new year off right, I thought it was important to capture a very special spirit … the spirit of charity, of helping, of never giving up.  Life can deal us lemons, but it is how we use those lemons that defines us. Australian artist and designer Timothy John, who has been dealt a big heap of lemons, has taken a stance in the face of adversity, transformed the bad into good, and is on a crusade that is all about raising awareness of, and finding a cure for, Parkinson’s disease.

Timothy John, artist and designer, was diagnose with Parkinson’s Disease in 2017.

John, who has collaborated on projects in the luxury industry, including creating designs for writing instruments and wine labels, was diagnosed with Parkinson’s Disease in 2017, and is very forthcoming about the debilitating disease.  A simple look at his facebook or instagram pages reveals how he struggles daily with the tremors and how he regularly tries to get one hand to emulate the other. Creating his incredible paintings — once so simple — now takes so much time. In a recent post he even talks about how the extreme heat increases the tremors and the brain fog, making for frustrating studio work, “dropping brushes, spilling paint, spacial confusion, exhaustion.” But then he goes on to acknowledge that “Sometimes it is ok to go with the flow and just ride it out.” The photo he posts, by the way, with this text is absolutely beautiful — something only a true artist could produce.

As a New Year’s Resolution, John vowed to “raise as much money and awareness as I can for Parkinson’s disease Research, through the Michael J Fox Organization.” In fact, in 2019, John collaborated with Italian writing instrument company Montegrappa to release the Tulip for Team Fox pen, with portions of the proceeds from every purchase going to fund the Michael J. Fox Foundation and its efforts to find a cure for the insidious disease. John has created designs for Montegrappa in the past, but this one is perhaps closest to his heart. He previously designed a four-seasons collection and a White Heron fountain pen for Montegrappa. He then approached the brand with his idea for a pen to benefit Parkinson’s research. 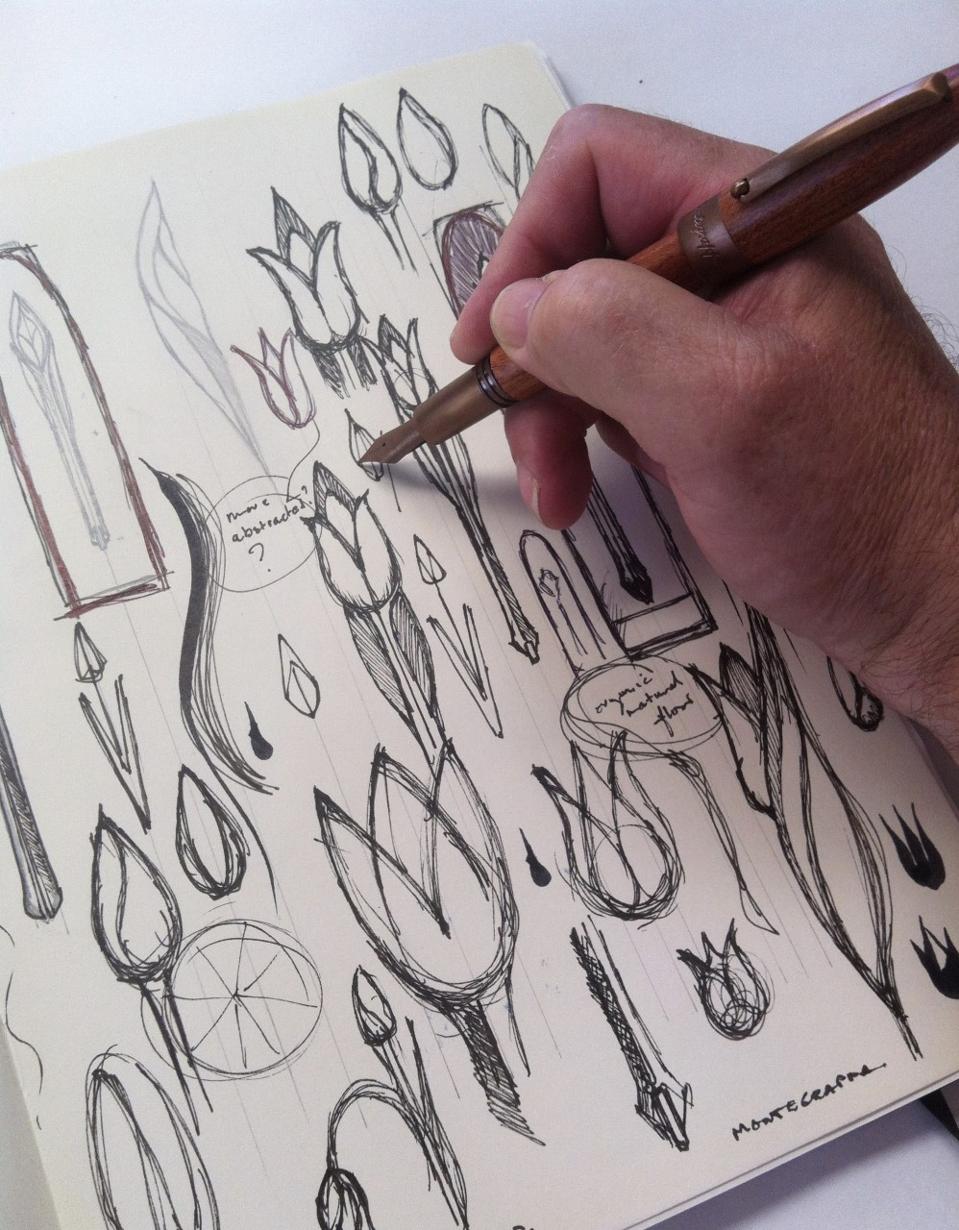 The Tulip for Team Fox writing instruments include fountain pens, rollerballs and ballpoint instruments — all made in Italy. John designed the tulip steel pocket clip (the global symbol for Parkinson’s awareness) and selected an orange resin barrel color to coordinate with the Foundation’s signature color. The resin cap of the pen is created in Tulip red and it is sold in a matching orange and red box.  The Michael J. Fox Foundation says it started the business to be able to go out of business. The Foundation, which holds the motto: “Here. Until Parkinson’s isn’t,” has raised more than $800 million for research thus far.

As to John: he has so many more ideas to bring to fruition to benefit this cause.  Ever the optimist, and always incredibly humble, he recently posted:

“I have many project ideas that would suit Luxury brands of the fashion, jewellery/watches, sector, so if anyone has any introductions for me I would be so grateful. I know this is unorthodox method to find opportunities but, I need to have some doors opened. As you know I have Parkinson’s and am unsure of what my creative future will look like as the disease takes hold, so I wish to do what I can, while I am able. Please if you have any connections or contacts let me know. With love and thanks, Tim.”

Can anyone else step in and help? Bless you Timothy.

A Closer Look At The Armin Strom Pure Resonance Sky Blue With Voutilainen Dial
May 7, 2021