Picture the mid 1950’s – a time of what some called the Easy Life … While there were fears of atomic bombs and the start of segregation in America, it was also a time of growth and movement.  Playboy 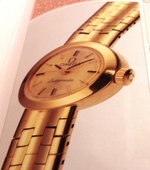 (photo of original Ladymatic, 1955)magazine was invented in the 1950s, and the Boeing made its first flight.  Life Savers Candy and Color TV made their debut that decade, as did McDonald’s. And in 1956 the lovely Grace Kelly married Prince Rainier in the Mediterranean sun. It was an interesting era.

It was also when Omega unveiled its Ladymatic Collection of mechanical watches for women: 1955. Of course at that time the quartz watch hadn’t yet been invented and the mechanical was the only choice for women. The Ladymatic was a hit and was a celebrated series for the brand for years.

Now, more than half a century later, as life has moved to millisecond computer technology, women have joined the workforce en masse and timepieces have changed altogether – Omega reintroduces the

Ladymatic line – but with an incredible twist. The only thing old about the watch is the name. The company went back into the archives to find a fitting name for an all-new technologically advanced visionary series of mechanical watches for women that it just unveiled to the world in Beijing last week.

The new Ladymatic was two years in the design and development stages, and started just on the heels of the unveiling of the Co-Axial 8520 series in 2008 at Basel. The ladies’ watch houses the 8520/8521 Co-Axial movement, which is a COSC-certified chronometer with 50 hours of power reserve and housing the Omega exclusive SI 14 silicon balance spring.

“The powerful movement behind this watch helps us appeal to a more sophisticated female watch audience,” says Stephen Urquhart, president of Omega.

Indeed, the movement is a state-of-the-art caliber, and by coupling it with a high-fashion look, the brand has pulled out all the stops. The watch takes its most feminine design influences from the flowing lines of waves, and features curves on the case sides, which also allow for peeks at the high-tech ceramic rings that are part of the case. The unusual patented bracelet also features asymmetrical wavy links in the first tiers for further undulating appeal. 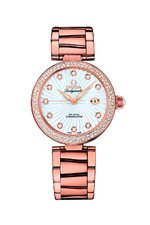 The watch – supported initially in the ad campaign launch by Omega ambassadress, Nicole Kidman – comes in a variety of diamond and non-diamond versions in steel or in 18-karat rose or yellow gold. It will retail from approximately $6,000 to $33,500.  The collection is available in Omega boutiques this month and exclusively  through January; thereafter, it will be found in select authorized Omega retailers.

My thoughts: This watch is a must-see, must-feel piece. It is a real beauty to behold and if you’re a woman who enjoys mechanical watches – this one is definitely the one to wear. With the Co-Axial movement in it — it’s a powerful, precise piece. And a COSC-certiifed chronometer. I particularly loved the rose gold version with diamonds becuase it has a lot of weight and a lot of elegance. But the steel models with the black dials have their own panache, too.  http://www.omegawatches.com/.