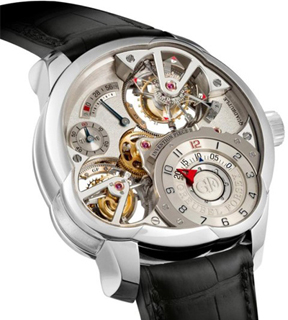 Max Busser of MB&F had a great day. With the Geneva Grand Prix d’Horlogerie just completed, MB&F won twice today! It won the award for the Public Prize (voted on by the public) for its Legacy Machine No. 1 (which we covered here), and also won best Men’s watch category. Zenith won the prize for the under $7,000 retail watch – for its Pilot Big Date Special (which we touched on here). The most innovative watch award went to HYT for its new liquid display creation (previously covered here), and the best Sport watch went to Habring2. The Ladies watch award went to Chanel for its Premiere Tourbillon (which we wrote about); the best Jewelry Watch award went to Chopard for its stunning high-jeweled Imperiale, and the most complicated award went – rightfully so — to Greubel Forsey for its Invention Piece 2, of which just 11 are made, each taking a full year to build. TAG Heuer won the Grand Prix award for its Mikrogirder (which we covered here). In simple format: 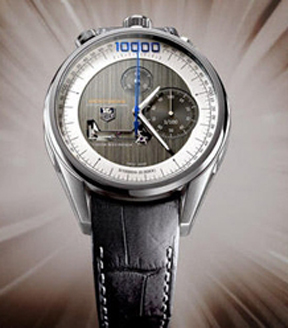 New this year to the Grand Prix: For the very first time, Geneva was linked in a two-way broadcast with New York, where the live transmission of the GPHG ceremony was held at Tourneau’s 510 Madison store. The Grand Prix d’Horlogerie de Geneva (GPHG) brings together some of the most influential figures in the industry, coming from around the world to attend the ceremony – and streaming it live to New York is a coup. Congratulations to all well-deserving winners.