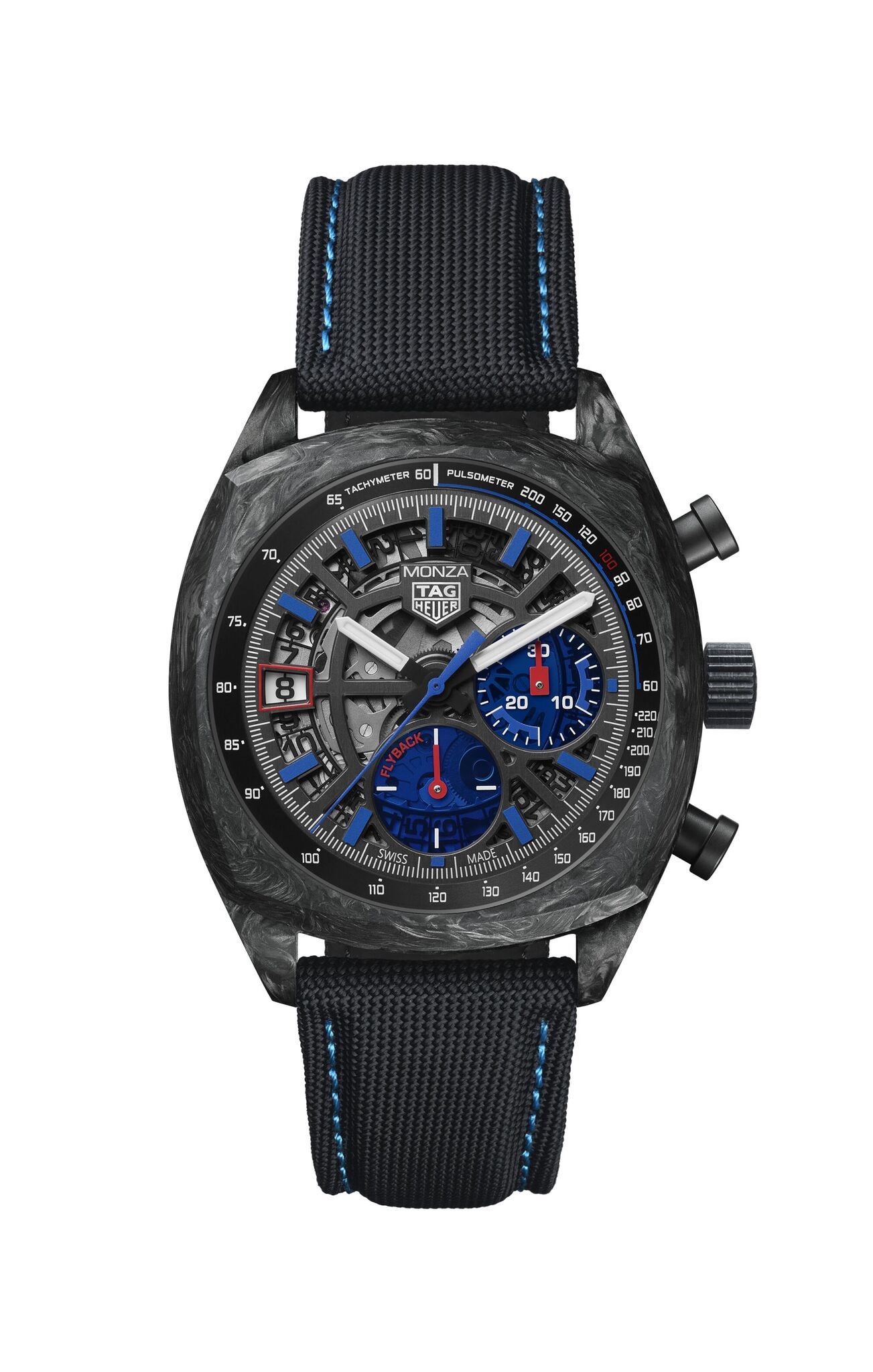 This is a pretty incredible watch. Let me just start by saying that. If you were not already a fan of the TAG Heuer Monza (why wouldn’t you be?) – the newest carbon fiber rendition will have you pretty much racing to get your hands on one. Unveiled just last night at the Singapore LVMH Watch Week event, this timepiece is one of the most important for the brand in years as it deftly blends history with a contemporary – even visionary – spirit worthy of competition motor sports. 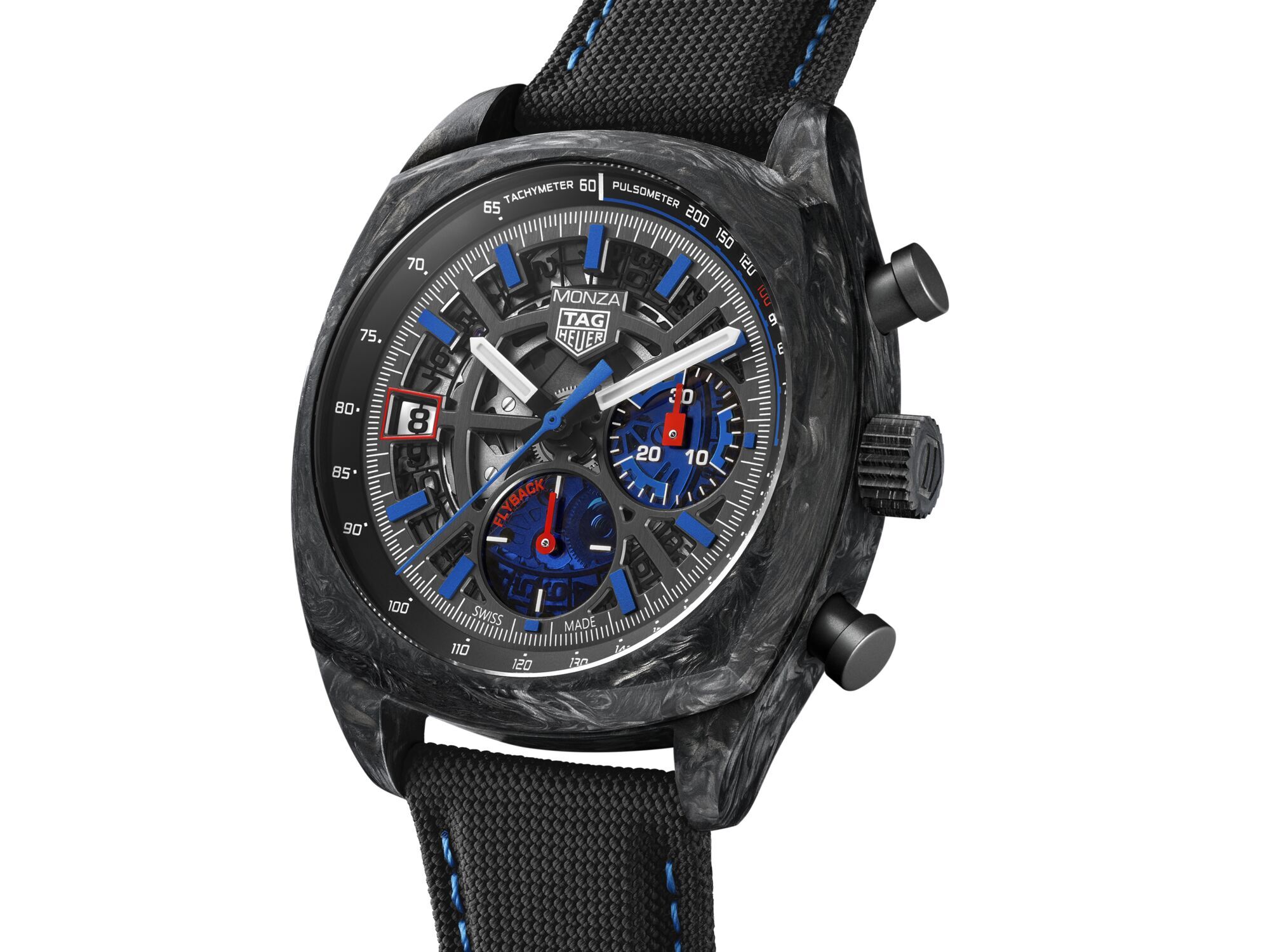 The new 42mm TAG Heuer Monza Flyback Chronometer watch boasts an ultra-lightweight case of carbon fiber that is also rugged, durable and dramatically appealing to look at – especially when juxtaposed to the bold blue and red color scheme of the dial. Perhaps even better than the daytime view of this watch (with off-white luminescent indexes  and hands) is the magnificent night-time view with turquoise hands and markers on the black dial and red and blue glow-light case sides.

Recalling the first ever Heuer Monza watch, released in 1976 to celebrate Niki Lauda’s 1975 F1 World Championship win, the newest watch is all about boldness, precision and electrifying looks. The black skeletonized dial showcases two chronograph counters —  one each at the 3:00 and 6:00 positions. Beneath the dial, one can easily glimpse the mechanics under the hood. 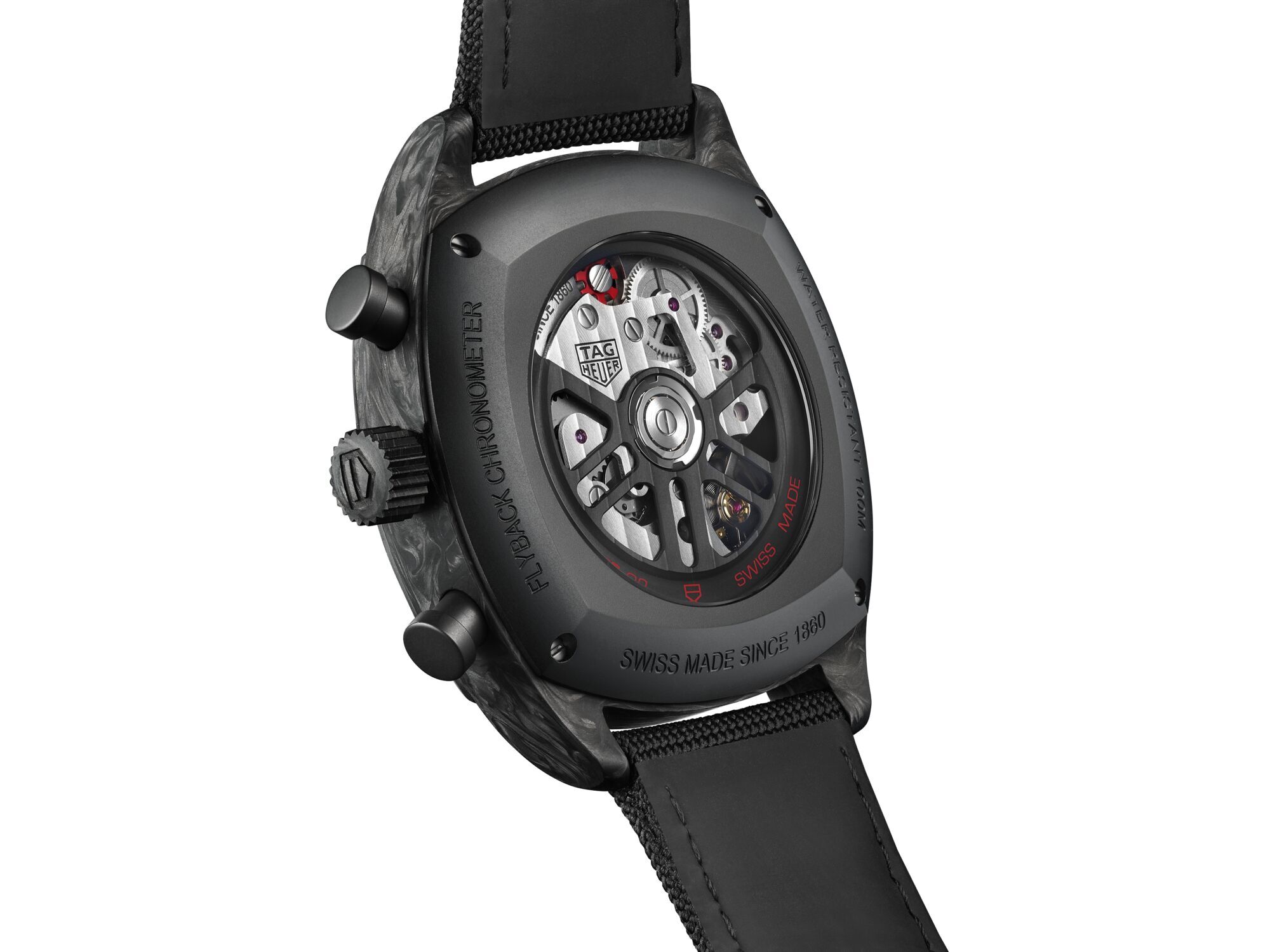 The back of the TAG Heuer Monza Flyback Chronometer gives a glimpse of the new movement and rotor.

Powering this alluring stealth timepiece is an in-house movement, Caliber Heuer 02 Flyback chronograph movement with COSC-chronometer certification. The flyback function allows for resetting the chronograph without stopping it – critical when timing races.   In addition to the chronometer status and chronograph function, the watch offers a tachymeter scale for measuring speed or distance, and a pulsometer for tracking heartrate. While a competitive driver may not worry about his or her heartbeat, an ordinary consumer just might once they see this watch on their wrist.

The date window at 9:00 glows in luminescent blue, as do the indexes and lacquered hour and minute hands. The subsidiary dial hands glow red and the bright blue and red luminesce against the black is simply arresting. The bezel on the watch is also carbon fiber and the crown and pushbuttons are black DLC steel. Water resistant to 100 meters, the watch is finished with a black textile strap with blue stitching and a carbon folding  clasp with safety pushers. The watch retails for $13,850. 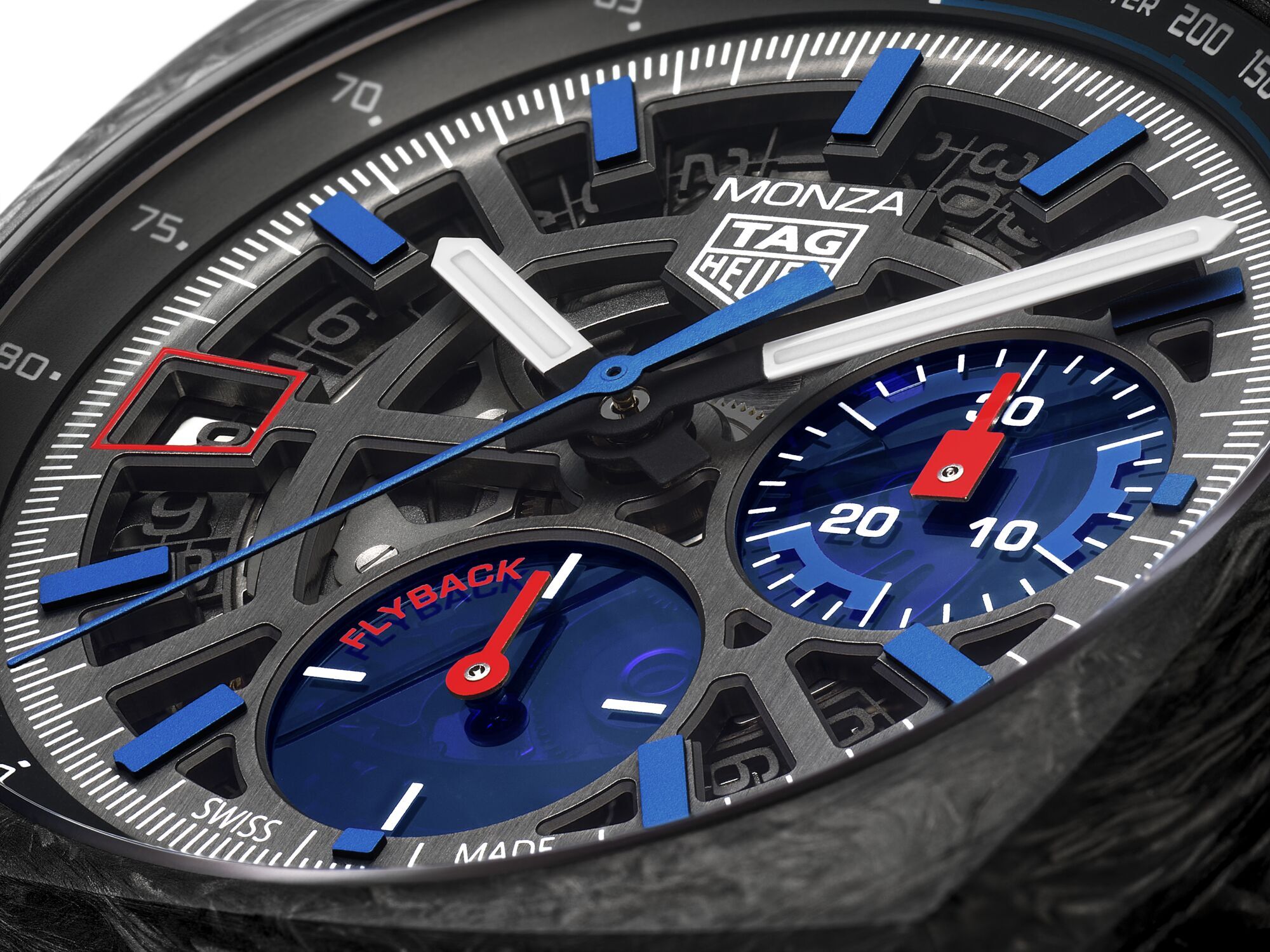 History of the  Heuer Monza

The first  Heuer Monza watch was created in 1976 in honor of the 1975 win of the F1 World Championship by Niki Lauda. He then took five more wins for the Scuderia Fearrari team, or which Heuer had been the technical timing partner since 1971. It was Jack Heuer’s idea to mark the exceptional year with a remarkable watch.

Meant to be named Modena, but then changed at the last minute to reflect the famous Italian racing circuit, the Monza was one of the first black-coated watches of the time. It was powered by a Caliber 15 with running second at 10:00 on the dial. The watch naturally underwent a host of evolutions and disappearnaces. It was revived in the early 2000’s and then made sporadic appearances over the past two decades. This new 2023 edition is an absolute delight, therefore, on multiple levels.

TAG Heuer continues to support Formula 1 with its partnership since 2016 with Oracle Red Bull Racing Team, and the team principle, Christian Horner, particularly loves the Monza since it was the watch he bought for himself to celebrate his early racing successes.

According to Frédéric Arnault, CEO of TAG Heuer,  “We are delighted to reintroduce the TAG Heuer Monza, one of our most important designs that holds such rich emotional and historic motorsport heritage. The 2023 TAG Heuer Monza is a very special reinterpretation of its famed ancestor, in which its unmistakable racing spirit comes alive in a bold and resolutely modern way, showcasing TAG Heuer’s most advanced expertise in dial design and performance timekeeping.”

Introducing The Vacheron Constantin Year Of The Rabbit Watch
January 11, 2023

Introducing the Piaget Year Of The Rabbit Watch
January 11, 2023