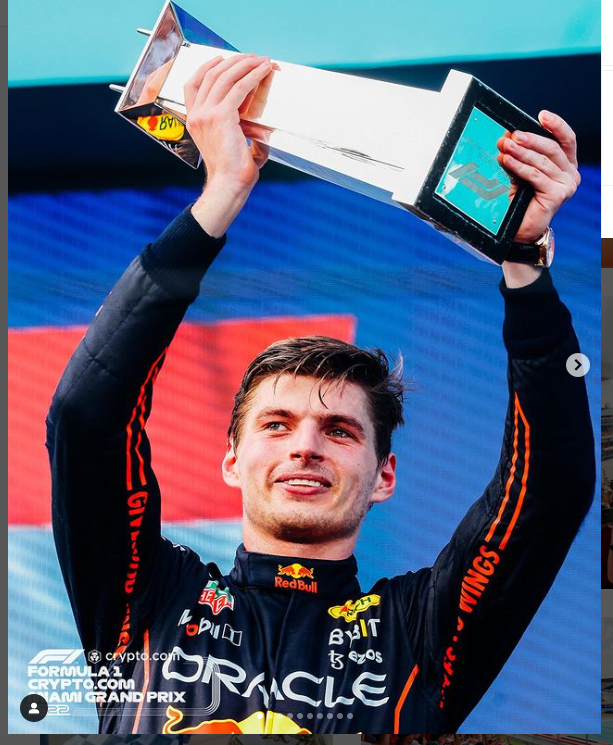 It was a heated race at the inaugural Miami Grand Prix yesterday, when Max Verstappen of Red Bull came in number 1, ahead of championship leader Charles Leclerc of Ferrari. Verstappen’s victory was the result of fast and precise driving. He passed Leclerc on the ninth lap and maintained that advantage throughout the rest of the race – cutting Leclerc’s lead in the overall championship down o 19 points. Carlos Sainz Jr. of Ferrari came in third – completing the podium at the Hard Rock Stadium.

The first-ever Miami F1 race was highly attended, not just by spectators but by watch brands, as well. Verstappen is part of the Red Bull Racing Formula 1 Team,  for which TAG Heuer is the Official Partner and Timekeeper. TAG Heuer even established a go-karting experience in town for the event. In terms of other watch brands: Richard Mille was there – thanks to its relationship with Ferrari; IWC was there thanks to its relationship with Mercedes. 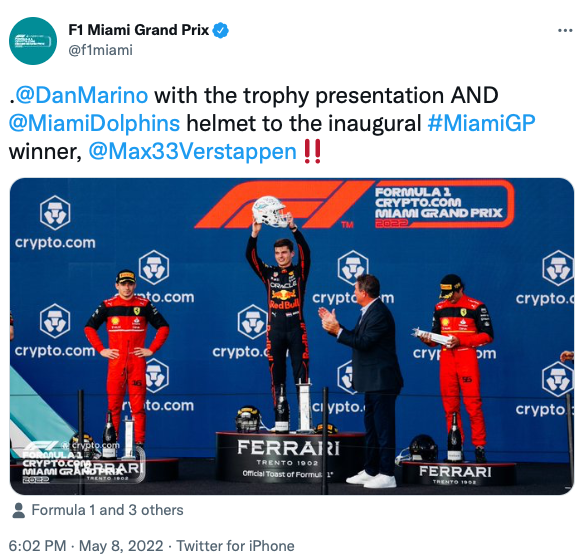 At the podium after the F1 Miami race.

Additionally, high speeds were reached — and timed — at the first-ever Formula 1 Racing Grand Prix to take place in the Magic City. 00 where it drew a huge crowd to one of America’s hottest –literally and figuratively — cities.Rolex was there — in full green-and-gold takeover — to time what was the  fifth round of the FIA Formula One World Championship™ 2022.

In fact, this year marks Rolex’s 10 year as a Global Partner and the Official Timepiece of Formula 1®,  a role it took on in 2013. Its famous green clocks and  green banners are splashed across the racing course, stands and pits during all of the races around the world. This weekend is no exception.

The F1 Miami Grand Prix finals took place on Mother’s Day (May 8, 2022) at the newly built  Miami International Autodrome. With 19 turns along its 3.36-mile circuit, offering drivers the ability to reach speeds of up to 199 mph, the 57-lap race had witnesses on the edge of their seats. 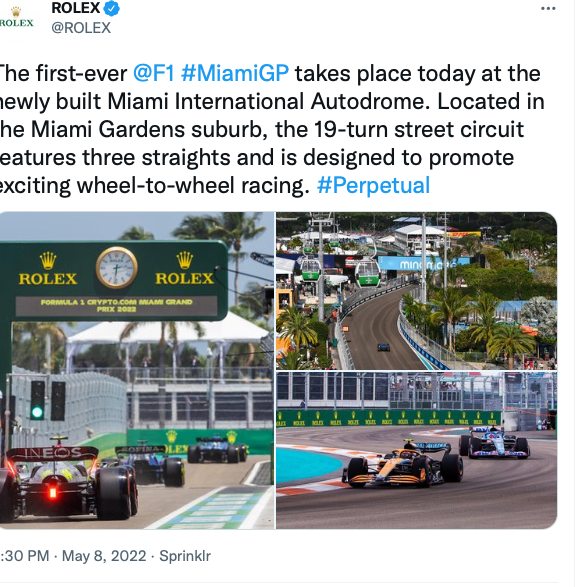 Rolex at the F1 Miami races.

Rolex has nearly a century long relationship with the world of motor sports, aligning itself with races and race car drivers around the world. Early ties date back to the 1930’s when Sir Malcolm Campbell set the World Land Speed Record (as the first driver to break 300mph. This was followed by its support of races such as the Rolex 24 at Daytona, the 24 Hours of LeMans and F1. It has also been closely affiliated with top drivers. Most notable: three-time FIA Formula 1 Drivers’ World Champion, Sir Jackie Stewart (a brand ambassador for more than 50 years), Jenson Button, FIA Formula 1 Drivers’ World Champion in 2009, and Mark Webber, multiple Formula 1 race winner, and more.