Secrets To Find Inside The Vacheron Constantin NY Flagship Store 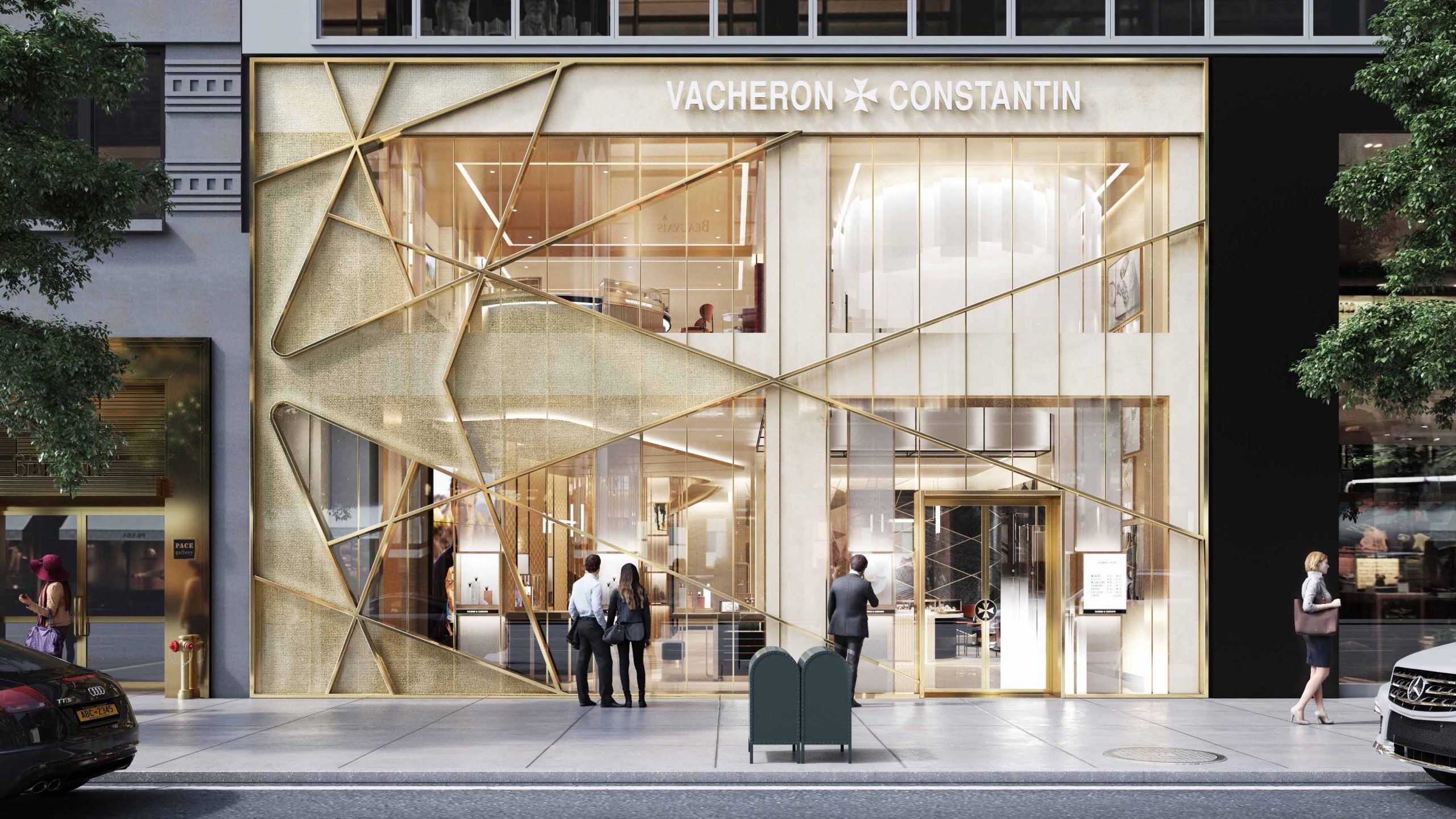 Apparently, I am forever more an inherent part of the Vacheron Constantin New York Flagship store. About a month or so ago, I received an invitation from the brand (as one of a select group of journalists, friends and clients) to write an inscription, or note to the brand about being One of Not Many. Written in gold on a white sticky paper, the note joined others on a special wall in the boutique, where it was photographed before being plastered over — forever preserved in a veritable time capsule. To me, this was a really cool, very personal touch to further endear the brand. It’s a secret that only you know. (Well, now I let the cat out of the bag.) 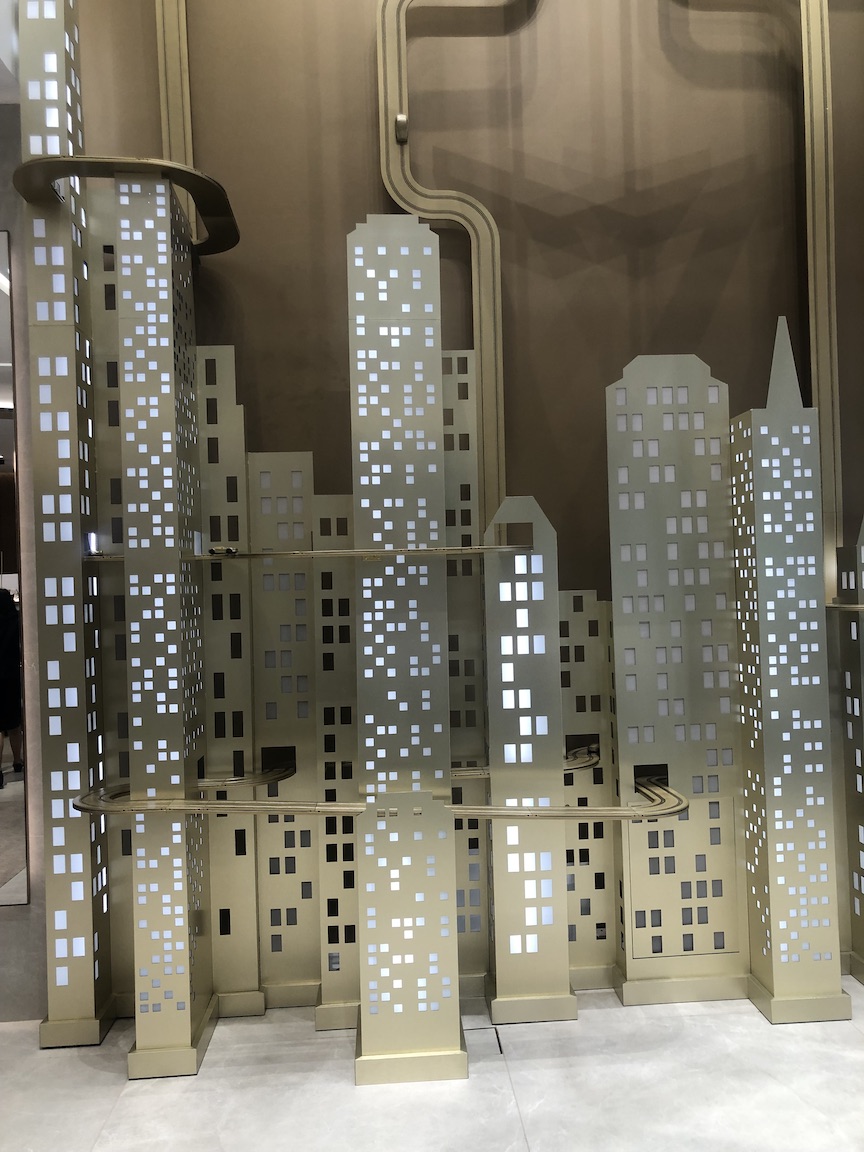 The nearly two-story tall New York City sculpture inside the store is inspired by Chris Burden’s Metropolis II sculpture and is motion-activated so that when someone gets close to it, tiny gold cars on tracks speed by like New York City taxis.

Visiting the Vacheron Constantin boutique for the very first time is an experiential event. One that I covered last week on my column on Forbes and that you can read here now. However, before you get the nitty gritty about all of the excitement in the boutique, I just want to say that this is truly a New York experience. While there is a  global, worldly, appeal to the store, certain elements are just all about New York. Among them: being served coffee (or cappuccino) in a traditional paper coffee cup found all over the city; a speak-easy-inspired hidden whiskey and bourbon bar — with specially labeled Vacheron Constantin bourbon.

It’s exciting enough being able to finally venture out now that the pandemic restrictions are subsiding somewhat, but it’s even more exciting in you live in New York and are a watch lover. In a soft launch, Vacheron Constantin opens its two-story 4,500-square-foot New York City flagship boutique on East 57th Street and be prepared: this is no ordinary boutique. In fact, it is a substantial space that tosses the old concepts of sales counters away and offers an immersive, interactive experiential visit where even non-watch lovers can spend some time whiling away the hours. 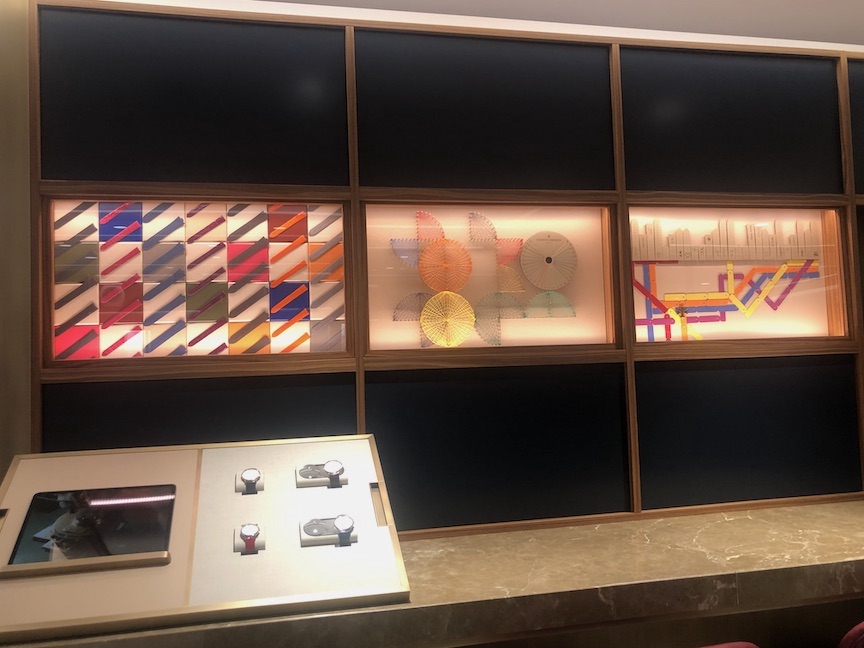 ON the upper level of the store, there is a special strap section where straps can be customized.

According to newly appointed incoming president of Vacheron Constantin Americas, Alexander Schmiedt, the boutique is like walking a microcosm of the venerable brand’s Geneva manufacture. “It is so much more than a boutique. It has all the elements that enable it to be an extension of the 265-year-old brand. You can spend an entire day exploring the store, with its visual archives, its art installations, a selection of vintage pieces and watchmakers on display,” says Schmiedt. “our objective is that people who love watches can come and experience fine timepieces by Vacheron Constantin and if they fall in love and buy one, we are very happy, but our boutiques are about experiencing the brand instead of making the commercial aspect the focal point.”

He isn’t far off when he says one can spend a day in the boutique. The experience actually begins outside, with an interactive motion-activated window display that is inspired by famous New York artist Chris Burden and his Metropolis II sculpture. Taking design inspiration from that tiny yet elaborate Metropolis city with moving  cars that Burden created, Vacheron Constantin worked with the Burden Estate to build an entire cut-out city in the atrium of its store, with some buildings towering eight feet tall.  The city has a track system and bronze/gold colored cars that move when someone gets close to them. 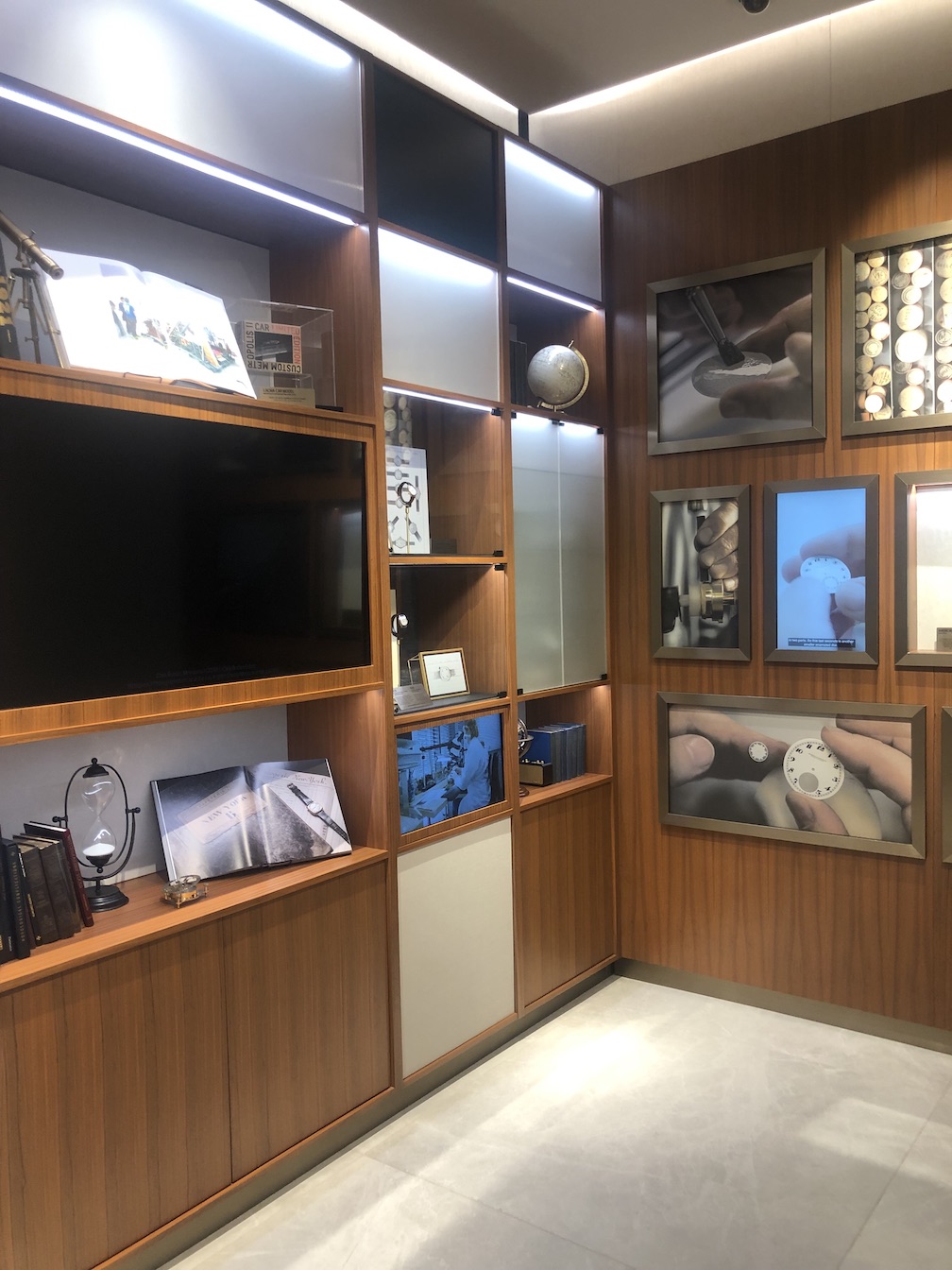 Absorbing some of New York City’s culture is important to Vacheron Constantin, which has had a strong relationship with new York as far back as 1831. “In the past, it was always in the spirit of luxury to have the same feeling in all the stores around the world, so that when you walk into a store in Tokyo or Hong Kong or Europe or America you have the same experience,” says Schmiedt. “But we want people in New York to come in to the flagship store and also have a local, city-specific experience so we will regularly have different elements linking the brand to the city. Visitors will get an experience that here that they won’t find anywhere else in the world.”

As intriguing as the Burden-inspired art element is, the plan is to regularly install new art exhibits. Still, for the opening of the flagship, the beautifully inviting city will draw people inside to start their exploration of a brave new retail world where customer experiences and the formation of  relationships come first. 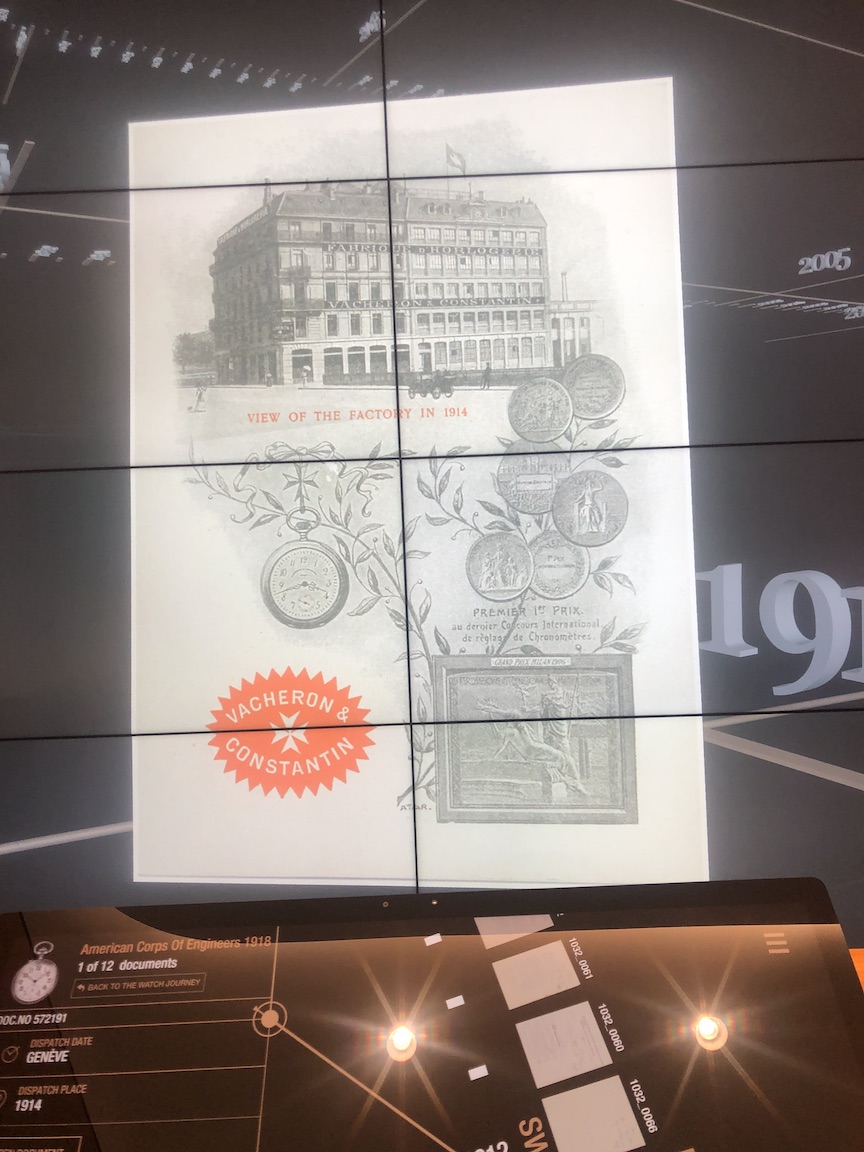 A really cool feature at the new Vacheron Constantin boutique is a digital archive section where guests can explore so much wonderful history.

For the opening of the flagship, Vacheron Constantin worked with the Swiss Federal Institute of Technology (EPFL) in Lausanne, Switzerland, to develop the “Chronogram” – a creative tool that uses state-of-the art technology to digitalize and display the brand’s rich archives. There is an entire section of the boutique that will carry a selection of vintage Vacheron Constantin watches, and that selection will rotate. The first selection, entitled “Classic with a twist” consists of watches from the past couple of centuries that boast interesting case shapes.

Additionally, for the first time ever, a Vacheron Constantin boutique will carry and sell a selection of the brand’s Les Collectionneurs series. The watches in this series are all vintage pieces that have been carefully curated and meticulously refurbished in the brand’s manufacture and intended for sale.  The flagship also acts as the first stop on a world tour for the new cushion-shaped American 1921 watch. The one-of-a-kind timepiece is a recreation of the first one built for the American market in 1921. The unique piece is exceptional in that the entire watch was predominantly made using period-specific components found in the brand’s workshops.  For pieces that did not exist, Vacheron Constantin hand-made new components using century-old techniques instead of modern day machinery.

With a single wall made of straw marquetry (which emulates the brand’s creativity with Métiers d’Arts dials) and an exclusive area for events (which recalls the top floor of the brand’s Geneva Manufacture where elegant private dinners and soirees are held), the flagship rings in a new era of immersive appeal and thoughtful design. While the inside of the store offers an adventurous journey (where one can even take a master watchmaking class), the outside is almost as impressive. A brass-toned design in the shape of the brand’s emblem, the Maltese Cross, lends a modern and visionary appeal to the two-story glass windows. 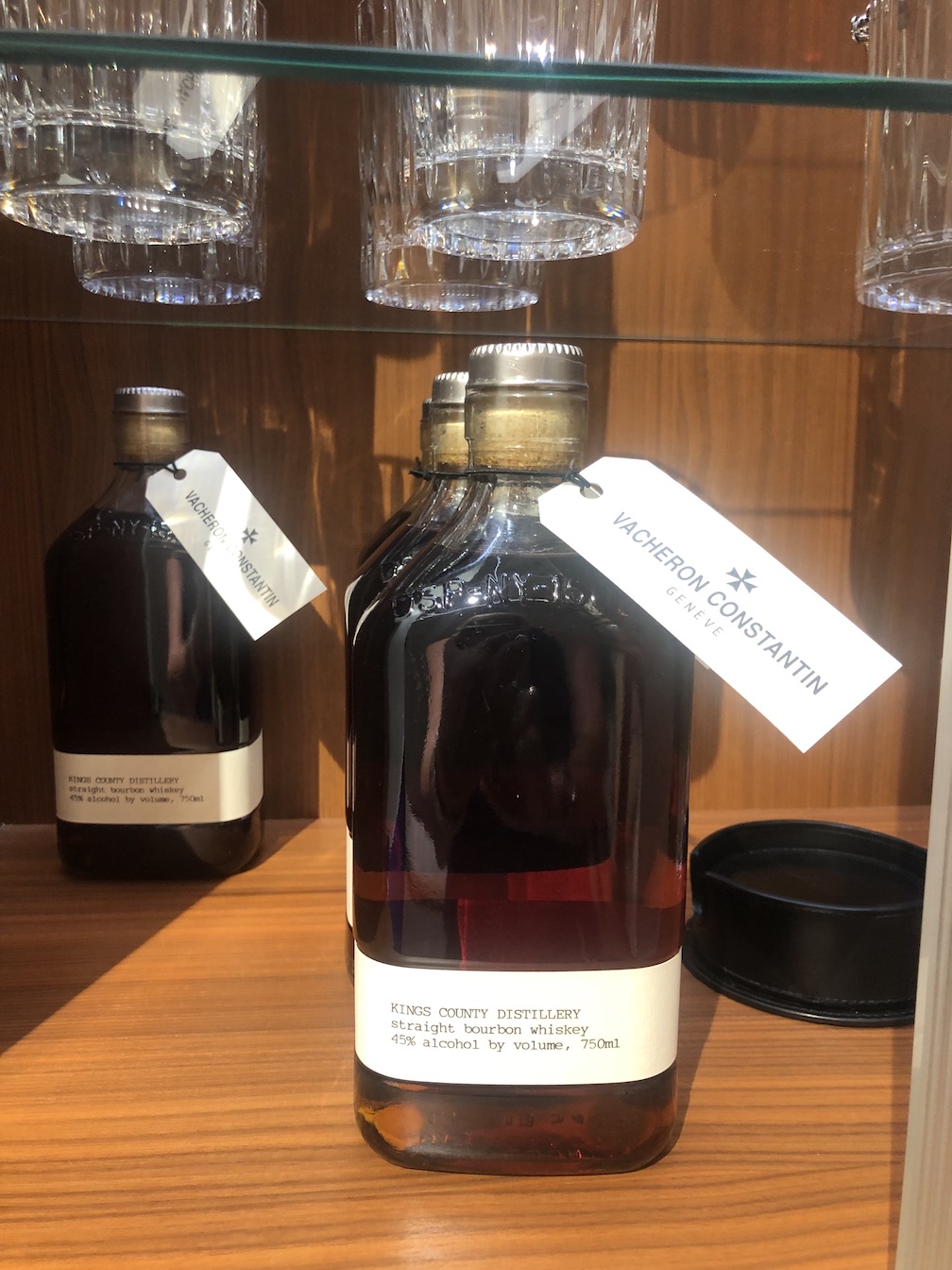 Vacheron Constantin New York City Boutique has its own nod to the speakeasy of yesteryear with its hidden stash of its own label bourbon by a New York distillery. (Yes, I imbibed.)

“The flagship is a great combination of Vacheron Constantin’s past and its ability to always innovate and look to the future,” says Schmiedt. The new space, whose formal grand opening will take place in early September, is open daily as of today.

Portions of this article by Roberta Naas first appeared on her column on Forbes.com.