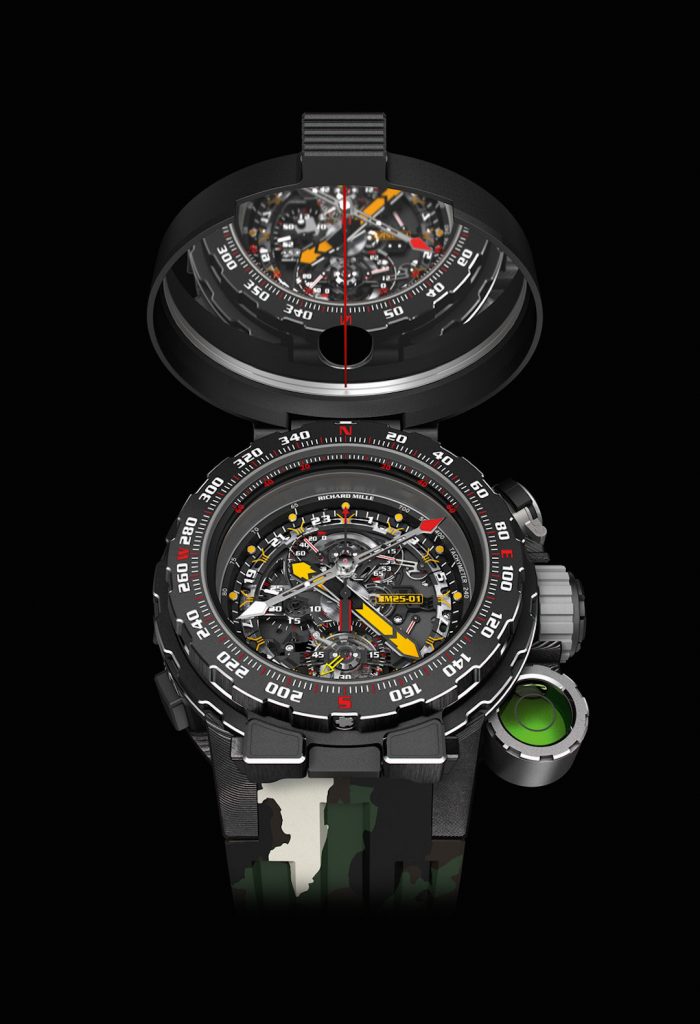 Recently, on my Perfect Timing column on Forbes.com, I introduced the newest watch from Richard Mille: The RM 25-01 Tourbillon Adventure watch — inspired by the adventurous souls and by the incredible roles played by Sylvester Stallone. In fact, the watch has direct design input from Stallone, who – as it turns out — is not just a great actor, writer, but also a painter. Here, we bring you a closer look at the collaboration and the watch.

The content below first appeared by Roberta Naas on Forbes.com.

“The collaboration between Richard Mille, founder of the eponymous brand and actor/author/artist Sylvester Stallone began four years ago, in 2014, and culminates in the Richard Mille RM 25-01 Tourbillon Adventure watch that is being made in a limited edition of just 20 pieces – but, beware, you need to plunk down a cool $983,000 for one timepiece. 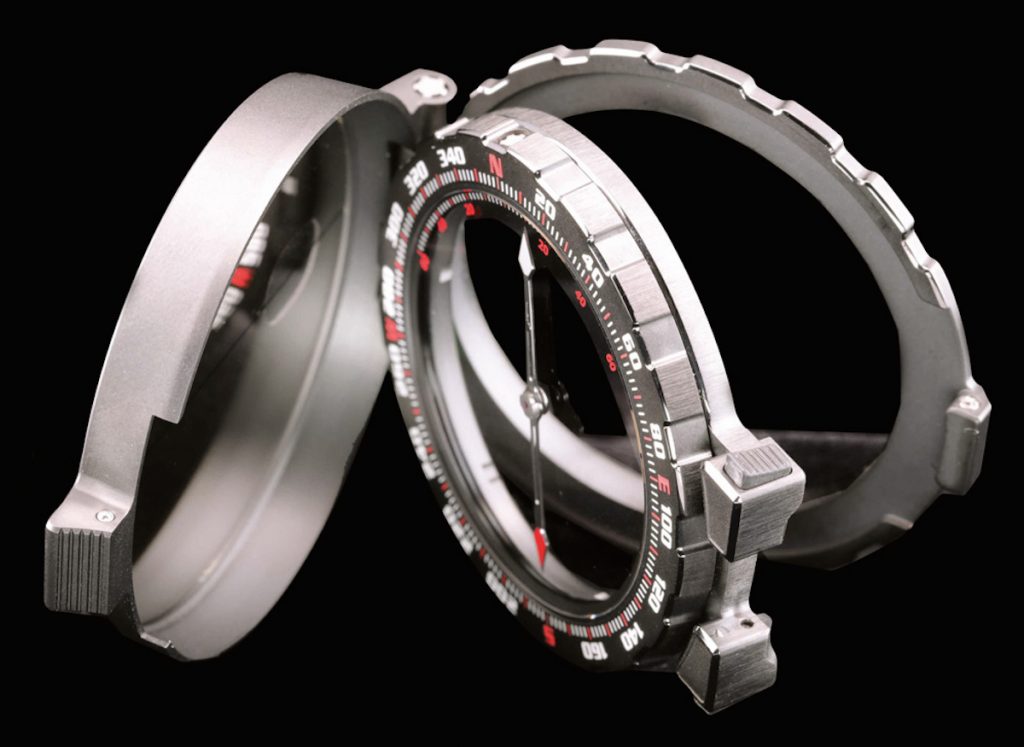 Best known in his early days as die-hard boxer Rocky Balboa in the Rocky series, and later as John Rambo in the 1982 movie First Blood, Sylvester Stallone has regularly played the big adventurer, the tough guy with a big heart and a conscience in many a Hollywood film. Richard Mille, who has become friends with Stallone, wanted to embrace Stallone’s on-camera bravado and passion, as well as his personal drive and ambition. As such, Richard Mille packs world-first functions into the RM25-01 that could be called into action on Rambo’s wrist.

The RM25-01 Tourbillon Adventure watch has some pretty impressive signature features. As its name suggests, it incorporates a tourbillon escapement (to compensate for errors in timekeeping due to the effects of gravity when the watch is in different positions on the wrist), however it also boasts a torque and power reserve indicator, and is offered with two interchangeable Carbon TPT bezels, one bidirectional daytime bezel with 24-hour scale, and a second bezel with cardinal compass points. The compass bezel, complete with lid, is crafted of Grade 5 titanium and equipped with a bayonet mount and a mirrored cover with a slot at 12:00 to improve sighting of the compass needle. Additionally, there is a titanium cased “spirit” level that makes it possible to hold the watch perfectly level – helping with accurate reading of the compass needle. 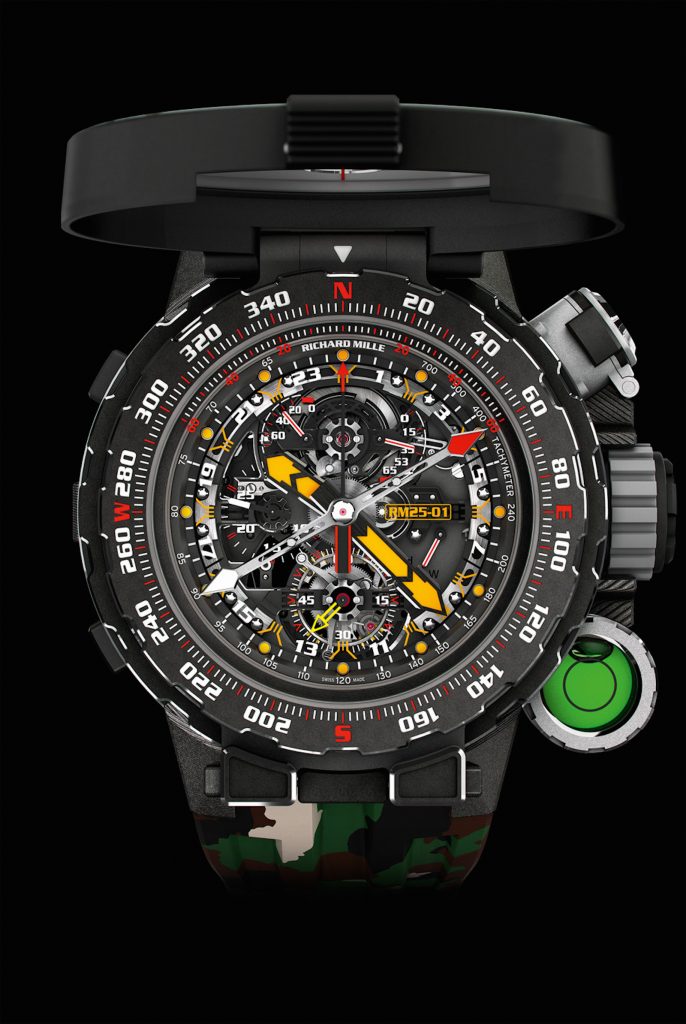 So, if the compass doesn’t wow you, maybe the water purification capsules will. That’s right, the watch features an hermetically sealed compartment  made of Carbon TPT that holds five capsules, each capable of rendering a liter of water safe to drink in anywhere from half an hour to two hours depending on the pollution level. This feature could prove helpful to those wanderers on Naked and Afraid if they could get the show to agree that a watch could be a tool and not an accessory.

The round case is built of titanium and Carbon TPT® with damascene finish for a rugged look and to significantly reduce the overall weight of the watch. The RM 25-01 movement features baseplate and bridges machined out of grade 5 titanium. The movement is optimized to reduce weight and increase precision and chronometric reliability. It is equipped with a ‘competition’ chronograph. The RM 25-01 Adventure Tourbillon is finished with a natural rubber strap with a camouflage pattern. 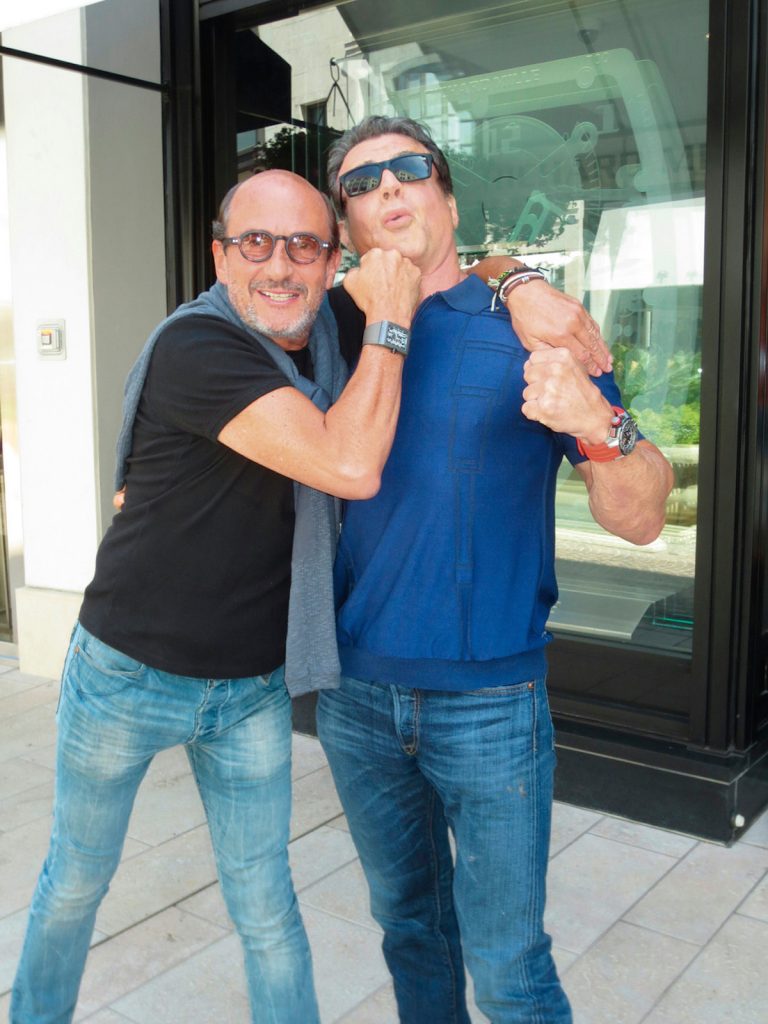 As mentioned, Stallone is not only an actor and an author, he is also an artist. He even has a collection at the Nice Museum of Modern and Contemporary Art. A lover of luxury and beautiful things, Stallone is also a watch lover, so this collaboration does not come as a surprise.

According to Richard Mille, Sylvester Stallone struck a chord with the watch brand founder thanks to his wit and humor, as well as his authenticity. Says Mille of Stallone, “He is also an artist, whose deeply personal work is rooted in his passion for great painting and sculpture. He doesn’t cheat. Stallone assumes sole responsibility for his creations. I see that as strength, as powerful. We became friends, and discovered that we were passionate about similar things and had similar desires. He is a fan of all things mechanical, something that comes through in his sculpture works. Of course, he also loves watches, and enjoys wearing them, particularly rather imposing models. So naturally, it occurred to us one day that we ought to do something together. The RM 25-01 is like no watch that has ever existed before. Like Sylvester Stallone himself, it is completely unfettered. Its development was especially slow and painstaking, and as an object it is completely in sync with the brand: extreme, designed for extreme conditions, useful, sophisticated and complex, yet unbelievably tough—the ultimate timepiece.” 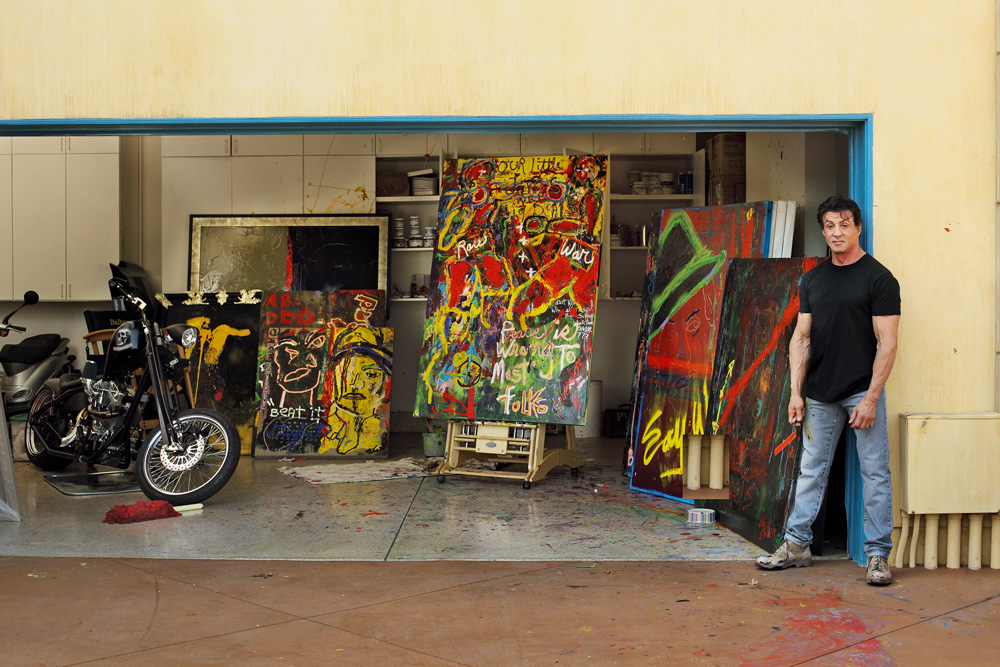 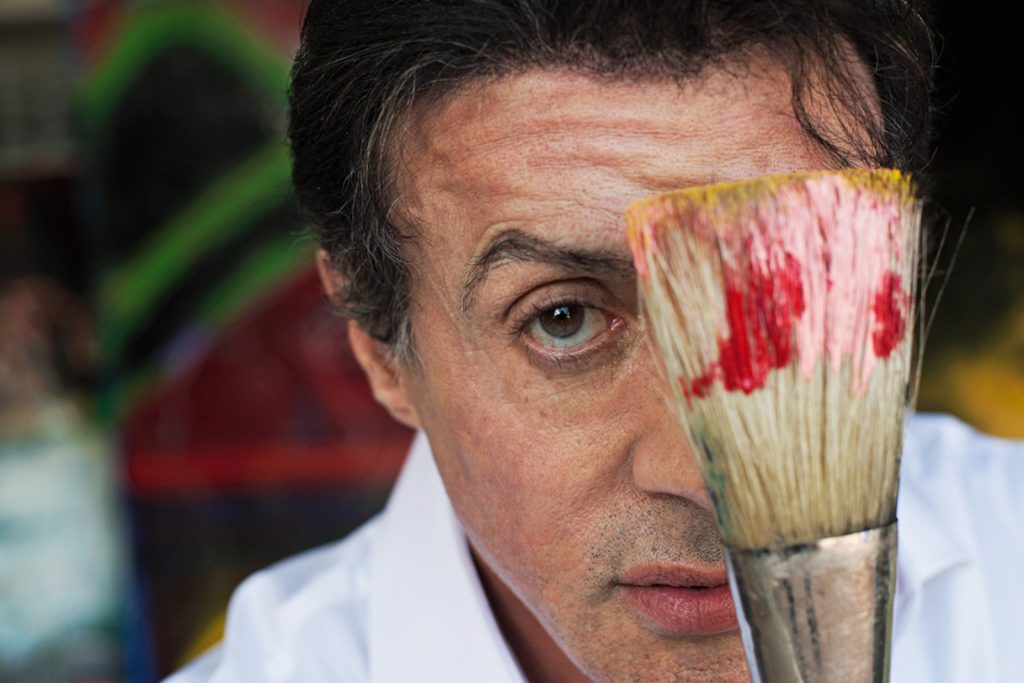 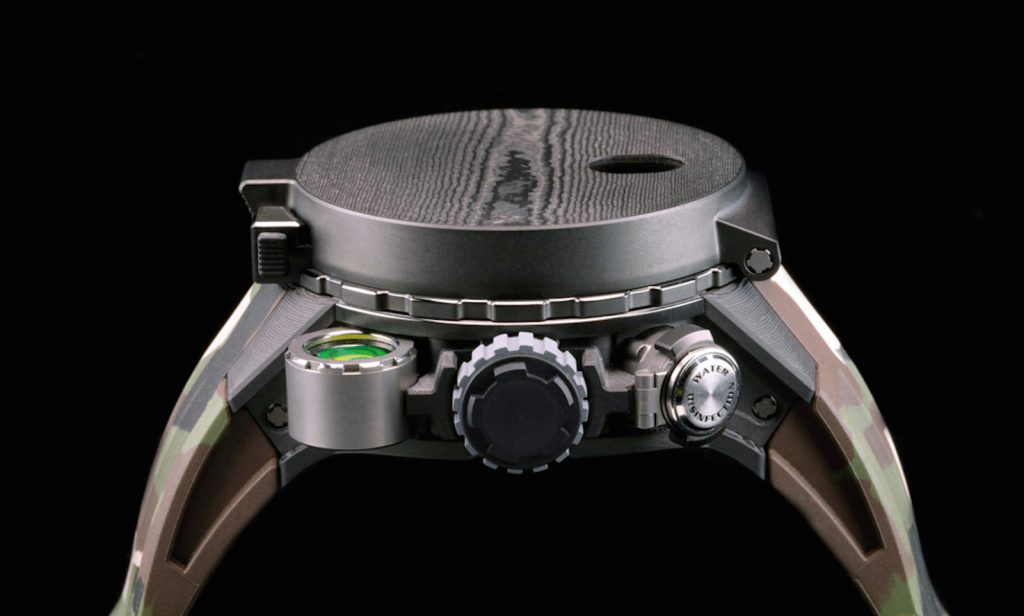