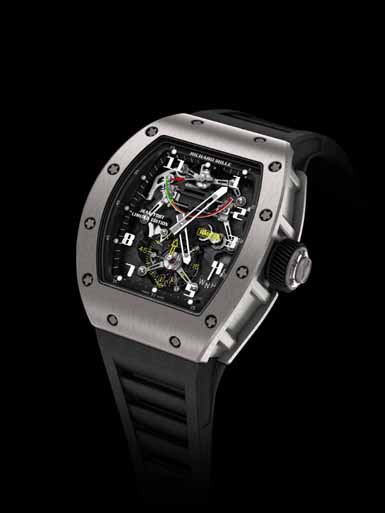 Cars and watches – they have so much in common: precision performance, mechanical prowess and devoted followers. Richard Mille is no newcomer to the world of automotive sports, (it partners with Felipe Massa and Jules Bianchi) as the official timekeeper for a range of renowned auto events such as the Le Mans Classic. Now the brand further underscores its support of the sport with the unveiling of the high-tech new Tourbillon G-Sensor RM 036 Jean Todt Limited Edition watch.

The newest watch is in support of road safety, and was developed for French motorsport executive, Jean Todt, and the global organization – FIA Action for Road Safety. The watch houses the RM036 caliber made entirely of grade-5 titanium and ARCAP, and with a carbon nanofiber baseplate. It is further equipped with a new complication – a G-sensor. This G-sensor system was developed and patented by Renaud Papi exclusively for Richard Mille, this complex mechanism visually displays the number of G’s accumulated by the wearer during rapid decelerations. Composed of more than 50 parts and measuring a mere 17mm, the RM 036’s G-sensor can withstand decelerations of several tens of G’s. Another unique feature of the RM 036 is the scale located at 12 o’clock, whose needle indicates whether the deceleration is safe (green zone) or critical (red zone) for the driver. Profits from the sale of this exceptional timepiece will be donated by Jean Todt to two key initiatives: the global campaign for road safety; the ICM Brain and Spine Institute, which he cofounded. Just 15 pieces of the Tourbillon G-Sensor RM 036 Jean Todt watch are being released.