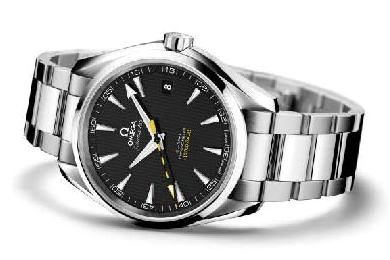 In a truly advanced mode, Omega unveiled its newest technology: the creation of a watch that is resistant to magnetic fields greater than 1.5 tesla (15,000 gauss), far exceeding the levels of magnetic resistance achieved by any previous watch, and solving a problem that has challenged watchmakers for centuries. It was in the early 1930’s that watch brands developed soft inner iron cases for their pilots watches to fight the effects of magnetism that would render the watch useless in magnetic fields.

Since then, strides have been made in this arena, but Omega pulls out all the stops with this watch.  The new movement was introduced yesterday in Geneva by Omega’s top executives and heads of development, research and engineering. The technology developed by the team of scientist, metallurgists, engineers and watchmakers, led to the first prototype of the movement, which has been fitted in an OMEGA Seamaster Aqua Terra. Unlike other efforts to combat the effects of magnetism, the OMEGA movement does not rely on a protective container inside the watchcase, but instead relies on the use of selected non-ferrous materials in the movement itself. Several patents are pending for the new movement.

Omeg’as press conference in Geneva to unveil its antimagnetic movement

Magnets are now more present in our daily lives than they have ever been. Watchmakers have to deal regularly with the issue of magnetism, as it is necessary for them to demagnetize mechanical watches whose performance has been compromised by exposure to magnetic fields, a problem that will be solved with the new movement. The new movement, the OMEGA Co-Axial calibre 8508, should be introduced to the market in 2013.