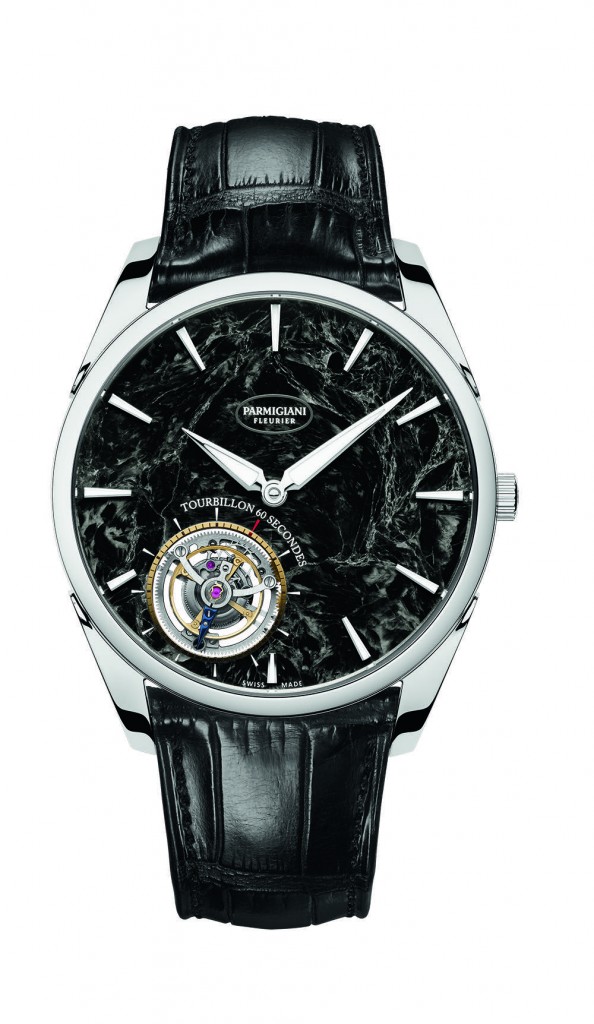 For such a young brand, Parmigiani Fleurier has been conquering the watchmaking world this year, with its remarkable timepieces — including the recently released Tonda 1950 Tourbillon 60 Seconds. The result of two years of research and development, the Parmigiani Tonda 1950 Tourbillon is a complication that masters two world firsts: the world’s thinnest automatic flying tourbillon and the world’s lightest tourbillon cage.

At 3.4 mm the Tonda 1950 features the world’s thinnest automatic flying tourbillon with micro-rotor. The micro-rotor, made  of 950 platinum, is directly integrated into the main plate without adding the thickness of another layer — thus determining the thinness of the entire PF517 movement. This reduction in size poses a challenge in creation. The limited space had to be managed by integrating the micro-rotor, the barrel, the tourbillon cage, the time setting mechanism and the central display system in the same main plate. 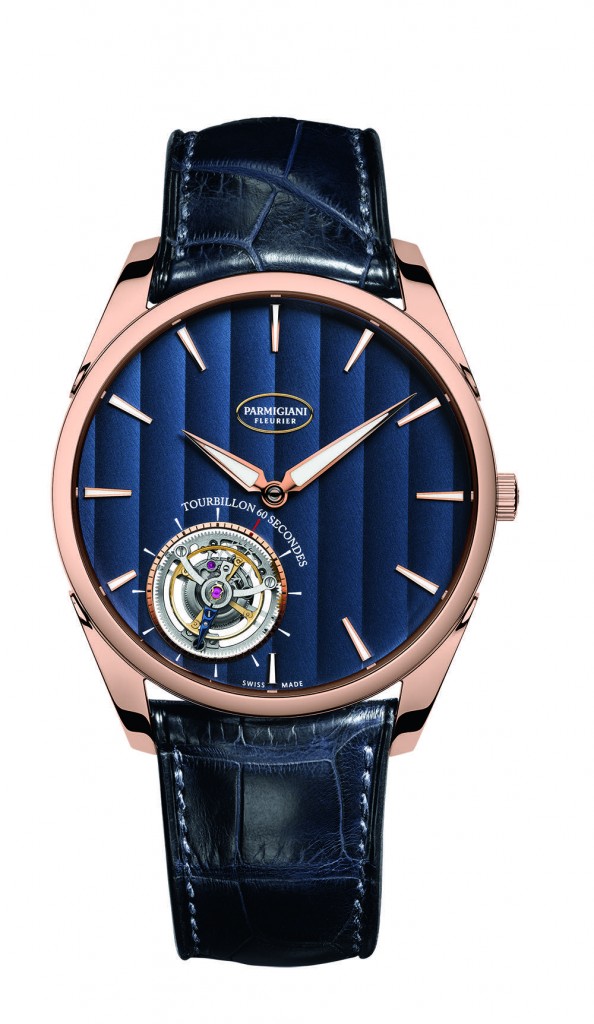 Additionally,  in order to keep the time display at the center of the dial, Parmigiani had to create a flying tourbillon with a cage mounted on a single support bridge. In this tourbillon, a highly sophisticated ball bearing replaces the mounting function, and is flush with the dial surface — offering stunning visual movement.

In its second feat of greatness, the Tonda 1950 Tourbillon features the world’s lightest tourbillon cage at .255 grams. In order to accomplish this, Parmigiani opted to use titanium, one of the lightest metals on Earth, but also one of the most difficult to work with in such small dimensions. The tourbillon’s low weight and inertia enables rotational movement with almost no loss of torque, thus the tourbillon’s efficiency is increased and the chronometry of the timepiece is highly accurate. 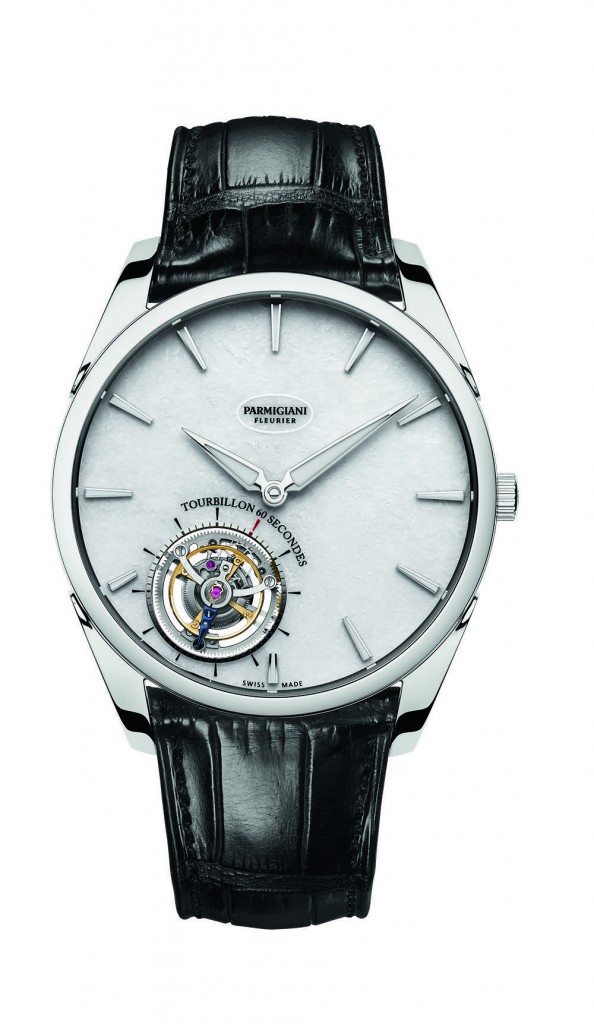 With its streamlined design, the Parmigiani Tonda 1950 Tourbillon achieves both masterful simplicity and extreme elegance. The brand goes a step further in the design of this watch, offering  five stunning dials utilizing precious materials. Among them: gray mother of pearl, white or black jade, grained white abyss  and blue abyss. Each is, naturally, finished with Côtes de Genève decoration. The watches are offered in an 18-karat   white or rose gold case,  and finished with  an Hermès leather strap. It retails for approximately $135,000 depending on the version. 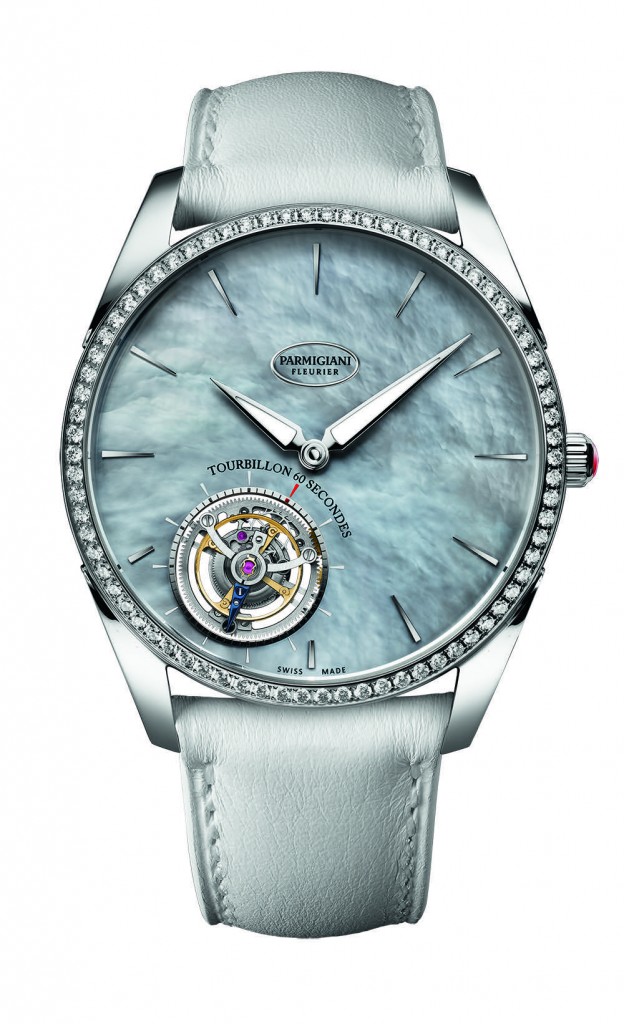 The dials are made from precious stones and mother of pearl