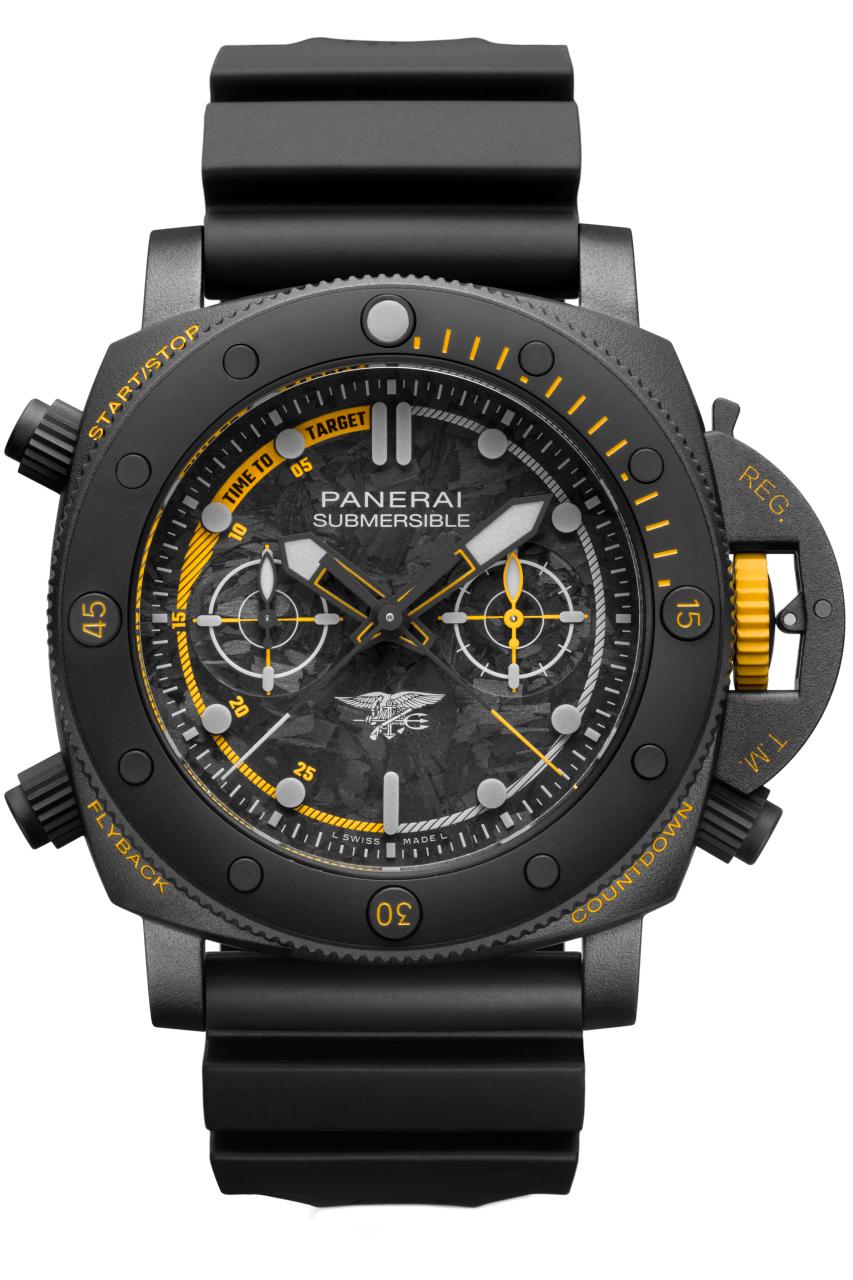 Ever wish you could take a few days and mingle with the Navy SEALS — maybe even take a training course and try your hand at search and rescue? Now is your chance. As it has in the past with other watches, such as the Jimmy Chin experience, Panerai now offers a real Experience watch  with the Navy SEALS wherein owners of one of the 18 pieces of this special edition watch will go on a multi-day, highly strenuous immersion with the SEALS. 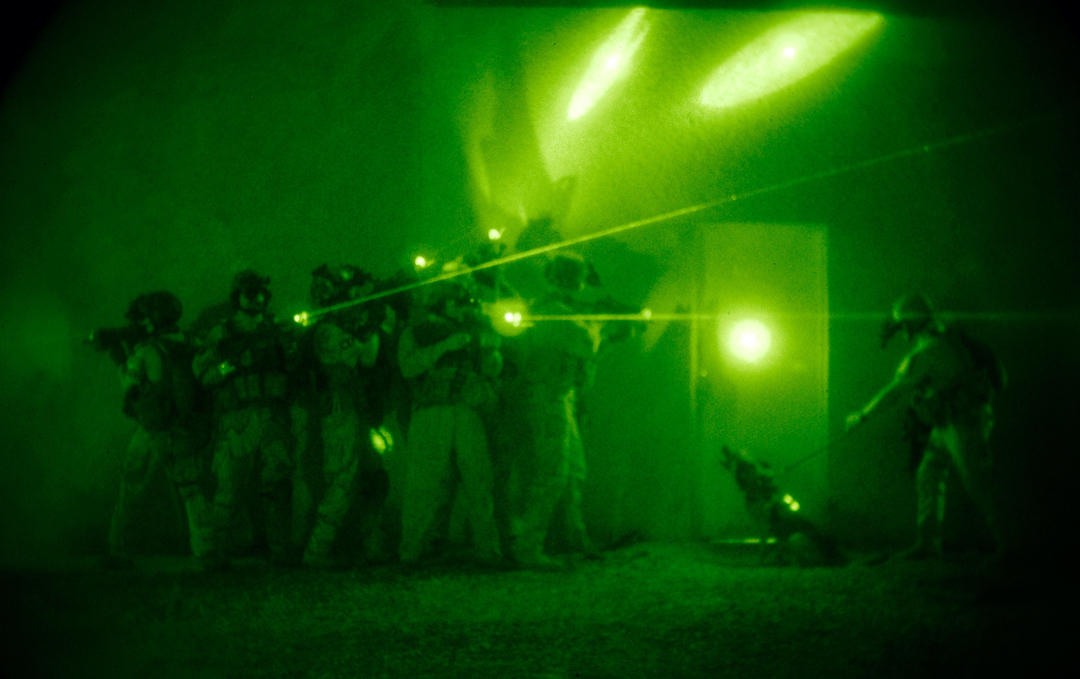 At a special event last week at the Core Club New York, one of the City’s most exclusive members-only venues, Panerai and the Navy SEALS announced a new partnership, unveiled three new watches, including the aforementioned experience watch, and Panerai’s historic team verified the legitimacy of an order and approval dating back to 1953 for Panerai watches and diving instruments for the US Navy. One might say this is a Tour de Force for the brand. 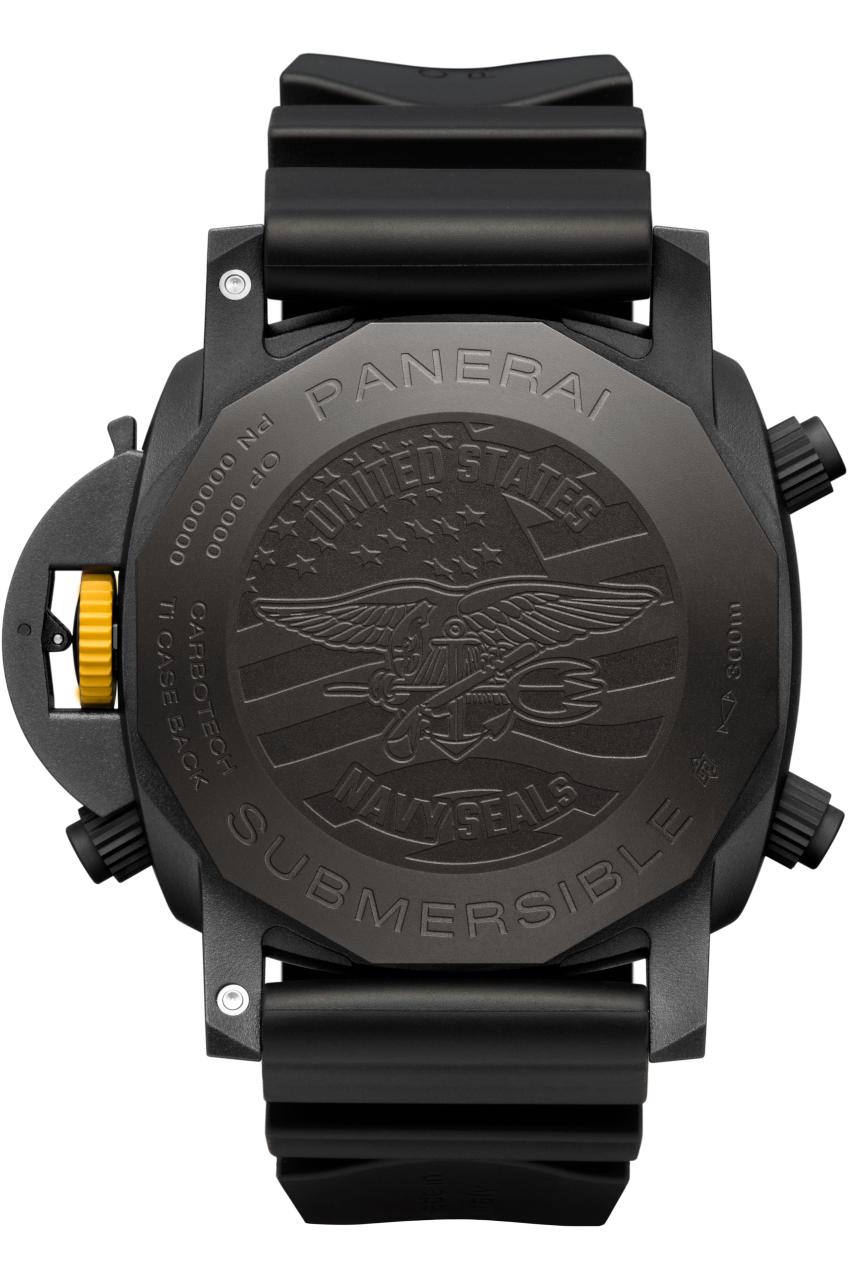 The back of the Panerai Submersible Chrono Navy SEALs experience watch.

The Elite Military Force, the United States Navy Sea, Air and Land (SEAL) Teams are known for going above and beyond the call of duty. Initially established by President John F. Kennedy in 1962, the SEALs are trained for unconventional situations – something Panerai targeted its watches for decades ago. In fact, in the early 20th century, the Panerai supplied watches and instruments to the Italian Navy – forever cementing its bond with underwater missions and its reputation for rugged reliability.

Now, to honor the affiliation between the SEALs and Panerai, the brand is unveiling three new Submersible watches designed to go the distance with the military tactic teams. These instruments boast specialized features and were developed in cooperation with, and under the approval of, the Navy SEALs. 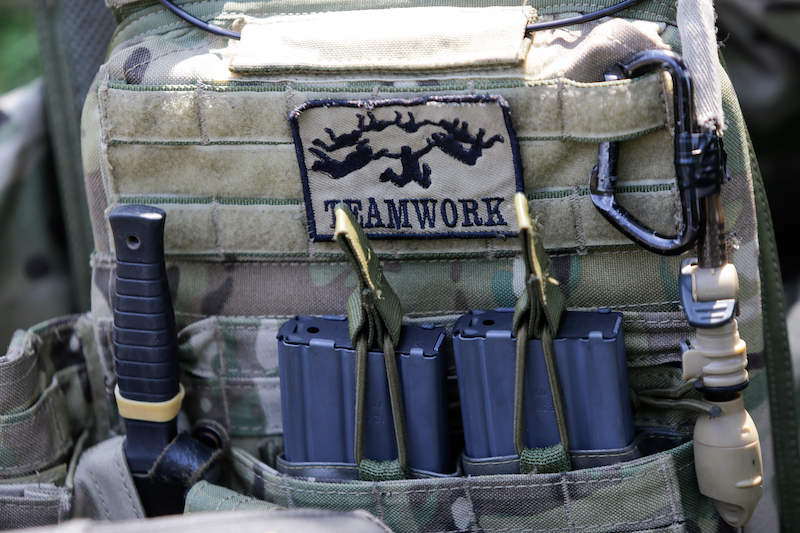 CONSTANTA, ROMANIA – JUNE 23, 2018: Equipment of Romanian military paratroopers lay on the ground before a jump, on June 23

The two versions of the Submersible Navy SEALS watches that are available for sale without the Navy SEAL “experience” are both GMT timepieces powered by the brand’s P.900 automatic mechanical movement that offers hour and minutes hand, seconds subdial, date at 3:00 and GMT display to show off a second time zone. This movement is endowed with three days of power reserve. Both watches are equipped with the Incabloc(TM) anti-shock device – making it incredibly resistant to blows or hits. They measure 44 mm  in diameter and are water resistant to 300 meters. Both are equipped with the brands trademarked Safety Lock crown protection device. 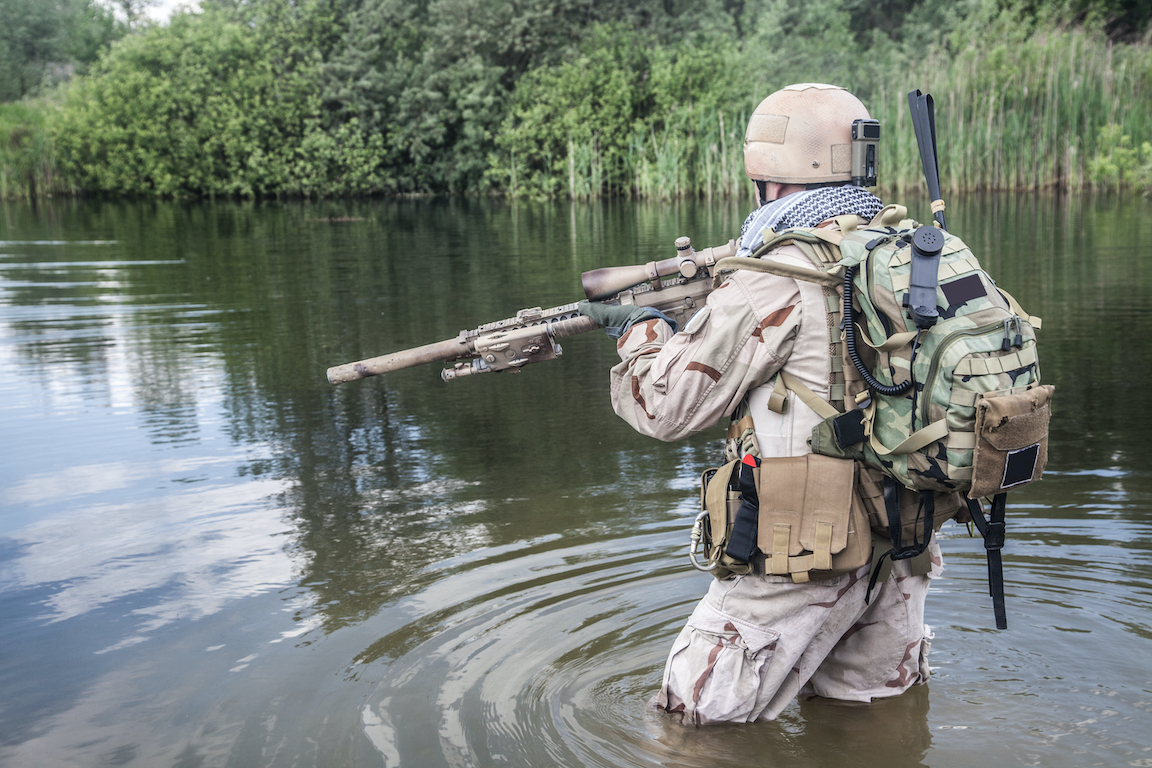 Member of Navy SEAL Team crossing the river with weapons

One version of the Submersible GMT Navy SEALs watch is crafted in stainless steel with a brushed s teel case and counterclockwise rotating bezel with a graduated scale for diving. It is sold on a Caoutchouc black strap.  The dial is slate gray at the edges and a little lighter in the center. At 6:00 on the dial, the watch reads “Navy SEALS.” Markers on the bezel and the dial are coated with luminescent material for easy reading underwater. Dial accent colors are orange.It retails for $10,100. 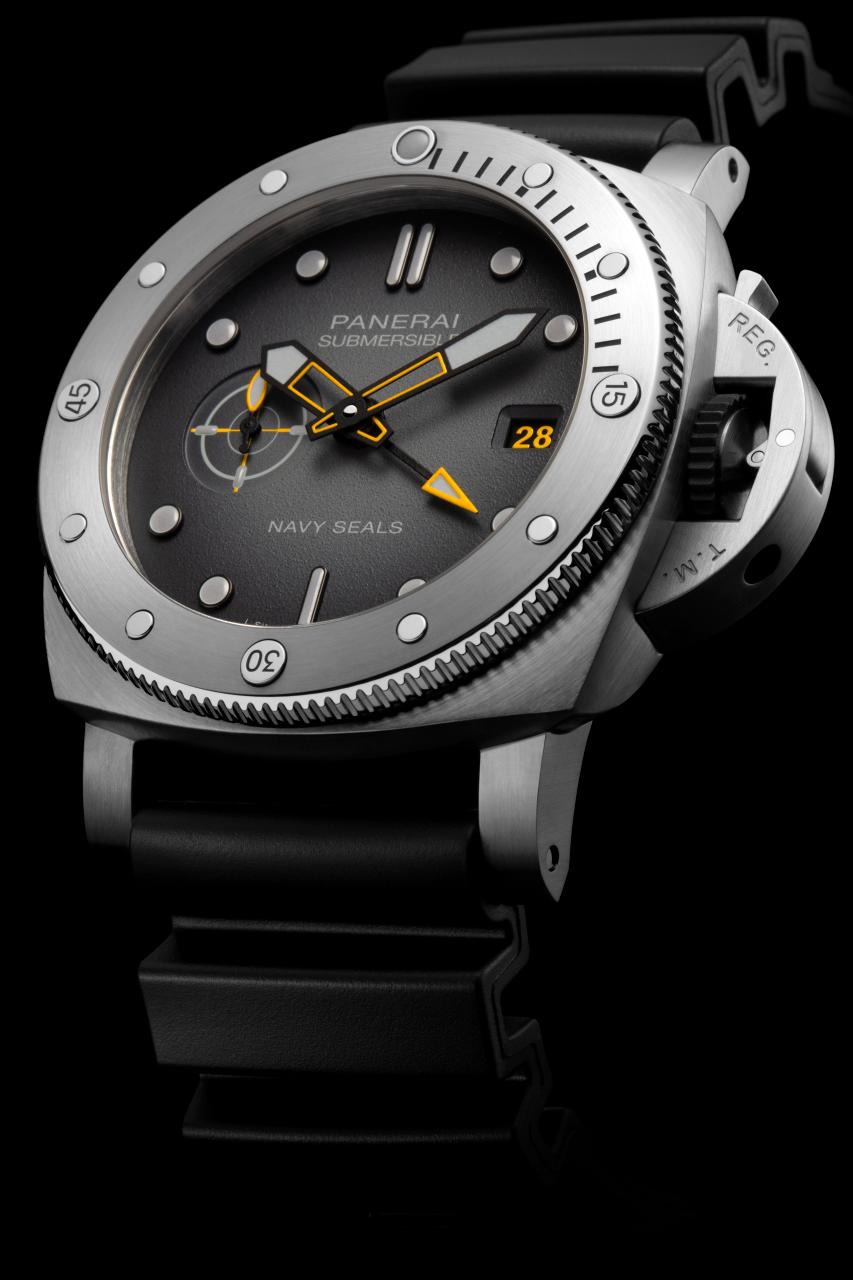 The second GMT version, the Submersible GMT Carbotech™ Navy SEALs watch houses the same 171-part P.900 caliber as the steel version but is crafted in the brand’s proprietary high-tech Carbotech material. Carbotech isa composite based on carbon fiber that is incredibly rugged, resistant to the elements and light in weight. Even the dial is made of forged carbon fiber and has a multi-hued look that emulates camouflage. 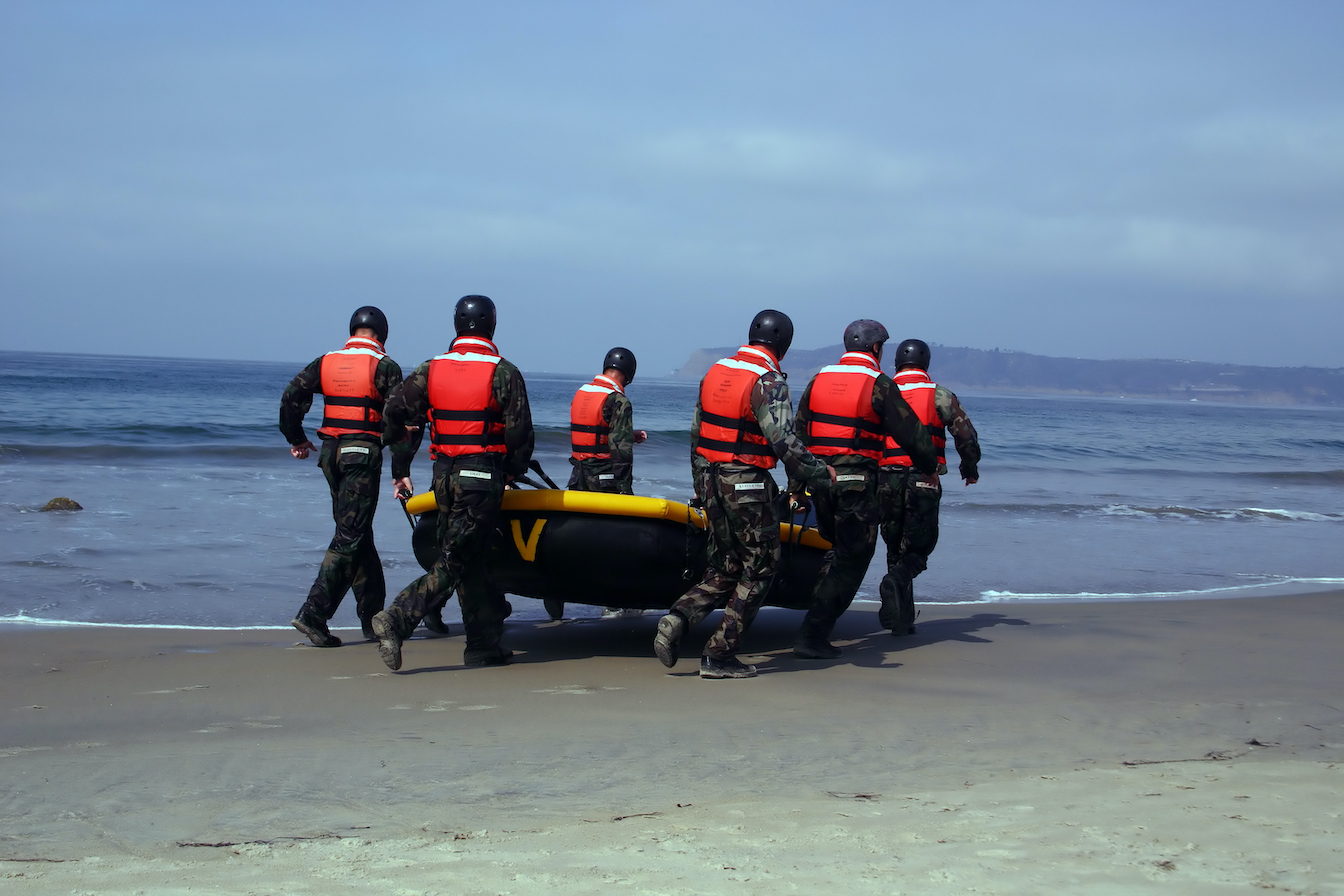 a group of U.S. Navy SEALS in training. They carry the boat out to shallow water, get in and row out about a quarter mile. Then they wait for the command to row back in to shore, land on rocks and have to carry the boat over their heads across the rocks. Quite an interesting exercise to witness. note that they are in full gear with boots and all.

The GMT Carbotech™ Navy SEALs watch boasts Super-LumiNova makers on the dial and hands. The accent colors are golden yellow to recall the Golden Trident symbol. The Safety Lock device protects the rubberized crown.  Just 162 pieces will be made in honor of the year the Seals were founded. Additionally, the Navy SEALs emblem is engraved on the case back, complete with pistol, trident and anchor against a stars and stripes background and boasting the worlds United States Navy Seals. It is sold on a rubber strap with an additional strap made of two materials that match the dial pattern. The Carbotech GMT Navy SEALS watch retails for $20,800. 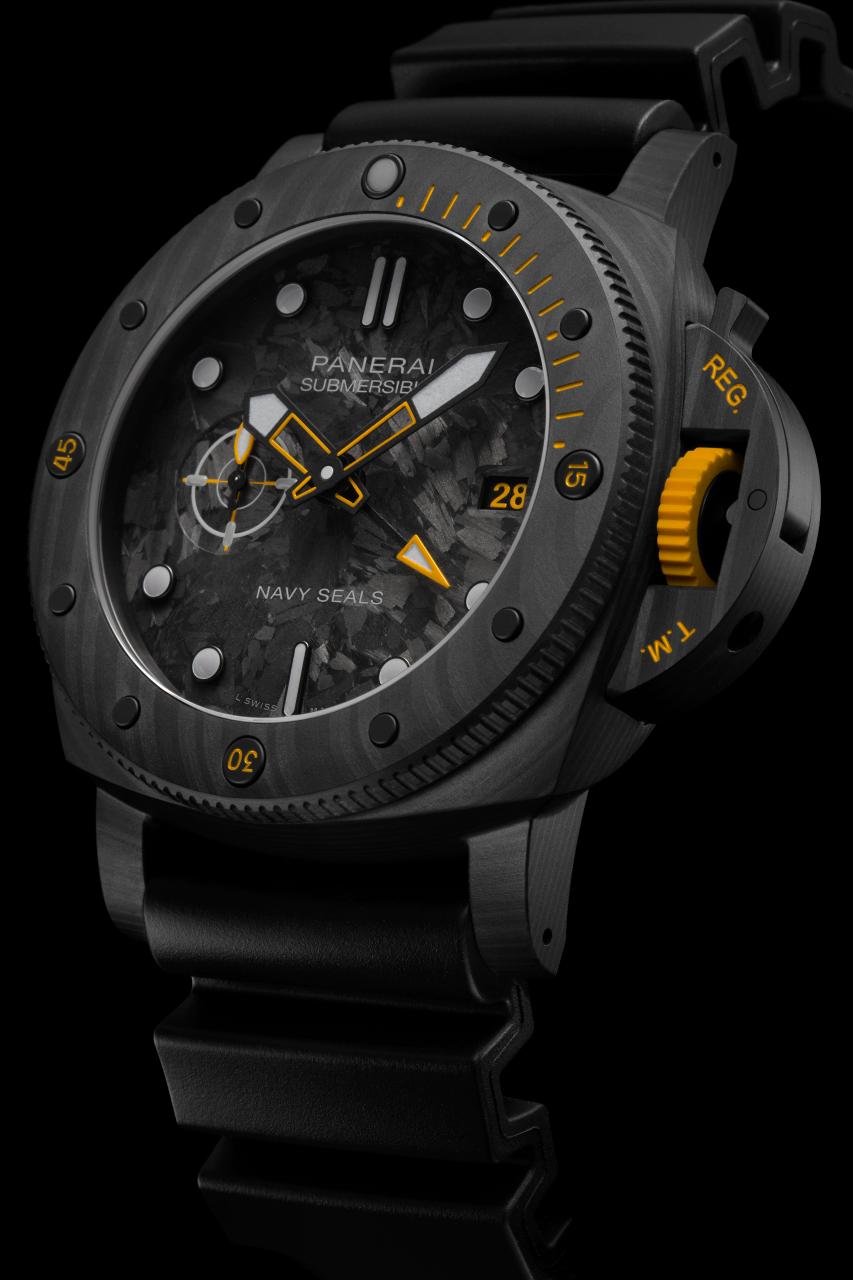 While these two timepieces are exciting in and of themselves and boast a supreme partnership, it is the Panerai Submersible Navy SEALs Experience Edition watch that just might capture the hearts and minds of true athletes. This watch – like other Panerai “experience” watches – is sold with a multi-day experience wherein the buyer of the watch joins the Navy SEALs on an immersive adventure that will include a rigorous training and rescue mission.

According to Panerai, buyers of this watch will be part of an event that offers “first-hand exposure to the rigorous physical, emotional and mental demands of SEAL training. Every member of the mission will confront and transcend personal limits under the guidance of some of the world’s most tenacious warriors, along with a Panerai instrument created to withstand the most challenging environments imaginable.” 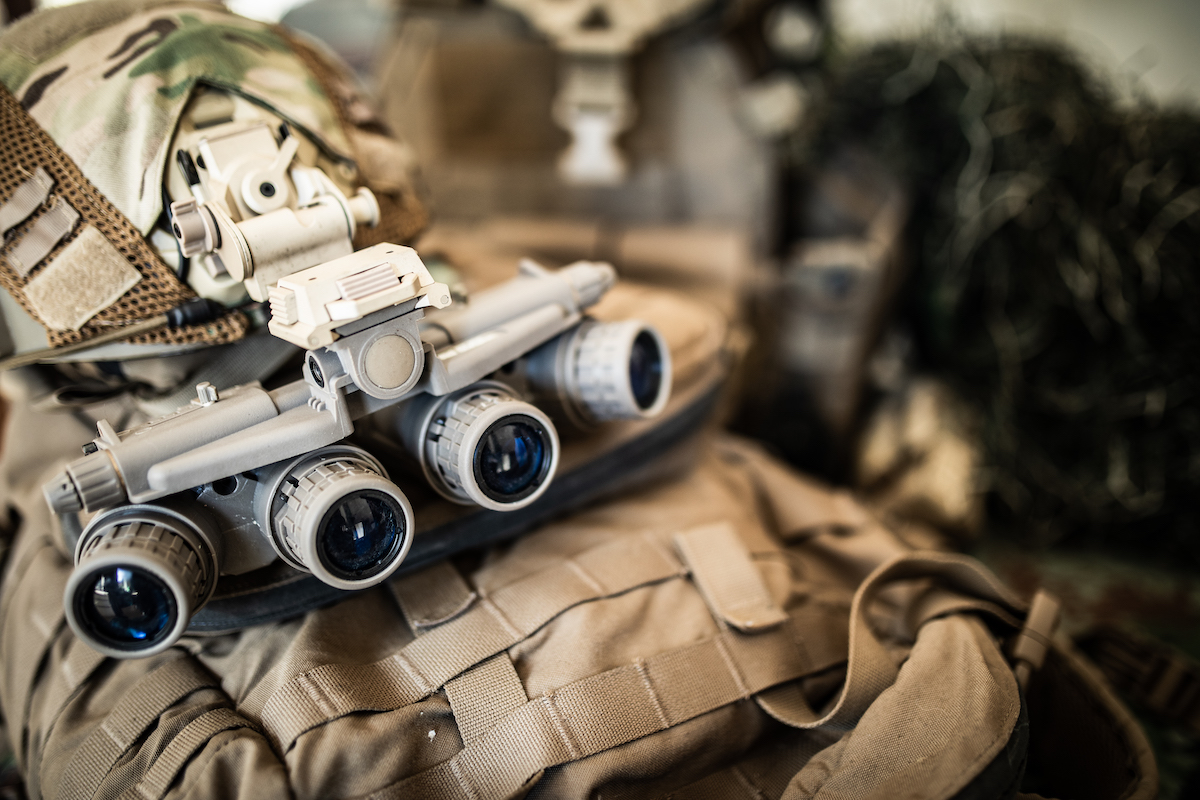 This is not an exaggeration. Panerai has offered previous “experience” watches, including a trip with mountain climber and National Geographic photographer Jimmy Chin that involved mountain climbing in the Grand Tetons and wake boarding. Other events revolved around explorer Mike Horn and others. All were total immersions into the world of the Panerai partner.

The Submersible Navy SEALs Experience is bound to be more than an adventure. Buyers will wear their 47mm steel timepiece on that trip. The watch boasts a black DLC coating  and gray, black and golden colorway. The dial showcases the emblem of the Navy SEALs at 6:00.  The watch is powered by the brand’s caliber P.9100/R and offers a couple of very important tool functions for carrying out important missions. 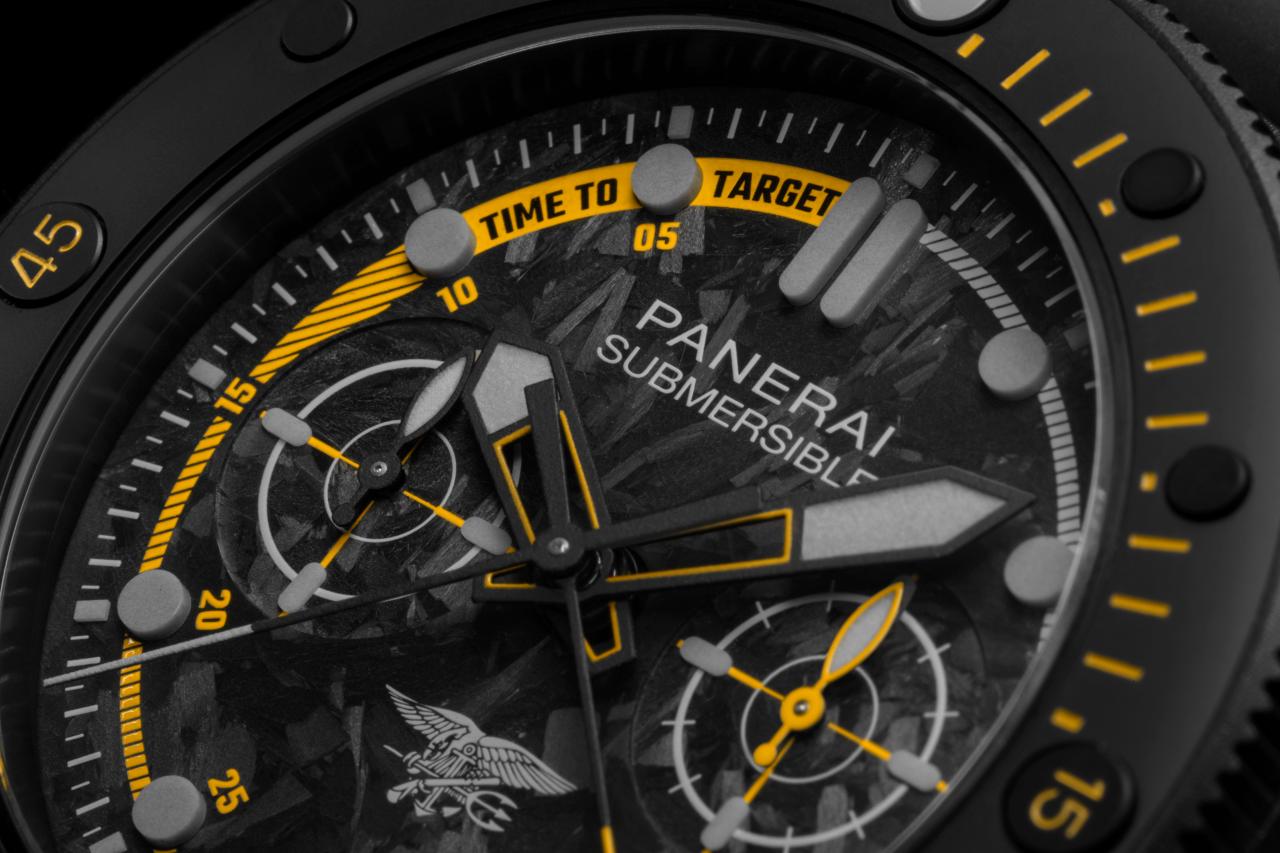 It is equipped with a flyback chronograph function that enables the wearer to time events and  to press just one pusher (at 8:00)  to reset the timing and start again automatically. It also offers a tactical Time to Target countdown that tracks time until a designate meeting time or rendezvous. That countdown is operated via the pushbutton at 4:00 with repeated pushing to set the desired interval. Another hand activates the chronograph stop/start button that shows the remaining time until arriving at the target location. This is a highly sophisticated tool that allows for great synchronization among team members. Just 20 pieces of this watch – with experience – will be sold. It retails for $57,500 and is well worth every penny if you are a SEALs enthusiast.

The purchasers of the Experience watch will also receive a specially created NFT artwork. Panerai partners with Skygolpe (Italian digital sphere artist) for this aspect of the Experience. The NFT will unlock information about the buyer’s excursion during the “experience” adventure and will also offer additional functions such as future services, events and more. 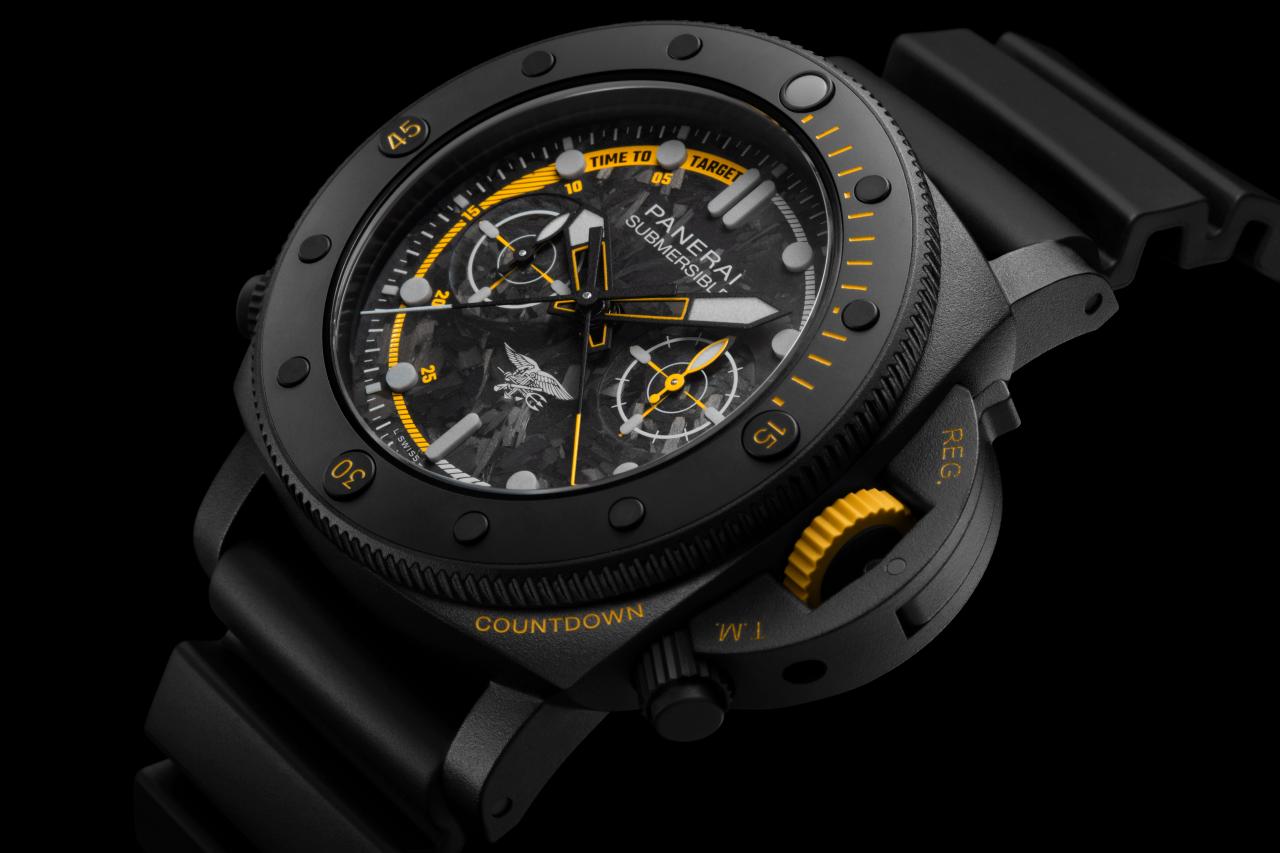 (Portions of this article by Roberta Naas first appeared on Forbes.com)