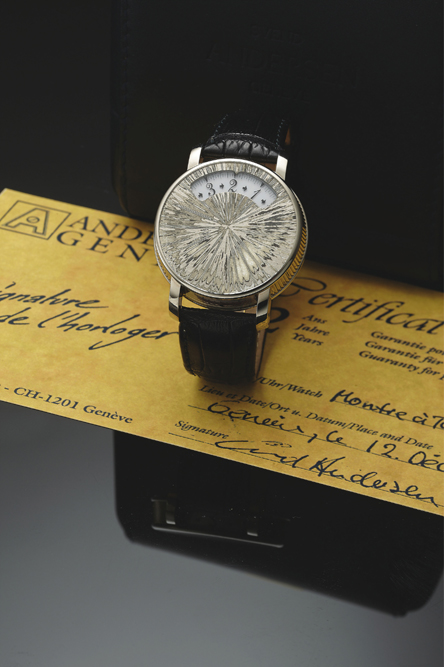 Watch connoisseurs will not want to miss this opportunity to purchase an amazing timepiece from famed Danish watchmaker Svend Andersen, who is renowned for his unique dial designs and extraordinary complications.  Now, at the upcoming Antiquorum April 10th auction of “Important Modern & Vintage Timepieces” an American Collection, which includes nine Andersen wristwatches, is up for sale.

Andersen first became known to the watch community in the early 1970’s when he built a clock in a bottle and presented it on Swiss television which earned him the title, “the watchmaker of the impossible.”  This led to a position in the complications department at Patek Philippe under the legendary watchmaker, Max Berney. After three years there, he set up his own workshop in 1979.  Andersen co-founded the Acadèmie Horlogère des Créateurs Indépendents (AHCI), recognizing independent watchmakers for their work. 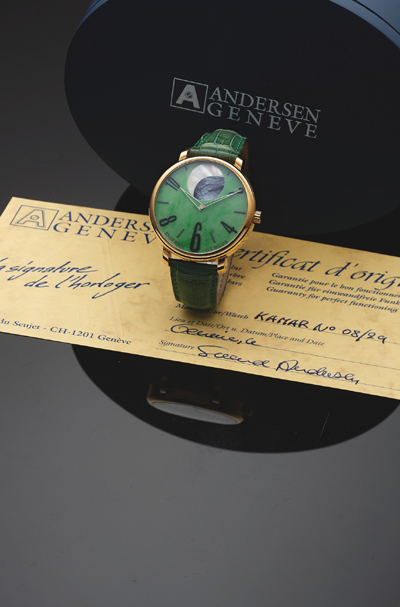 Included in the collection offered at Antiquorum’s April 10th auction is the Svend Andersen Montre à Tact Mokume designed by Walter Haselberger.  Made in 2002, the Svend Andersen Montre à Tact, No. 15/33 is an extremely rare, self-winding 18K white gold wristwatch featuring a dual digital time display on an 18K white gold dial with feathered sunburst pattern. The decorative metallurgy technique was invented during the 17th century in Japan and was initially used for sword fittings. The watch is accompanied by the original fitted winding box and Certificate of Origin. It is estimated to sell for between $15,000 and $20,000.

Also offered is the number 8 of 29 limited edition Svend Andersen Kamar No. 8 Moon Phase in pink gold with an exceptional Jade dial and large moon phase display. It is expected to sell for $6,000 to $10,000.