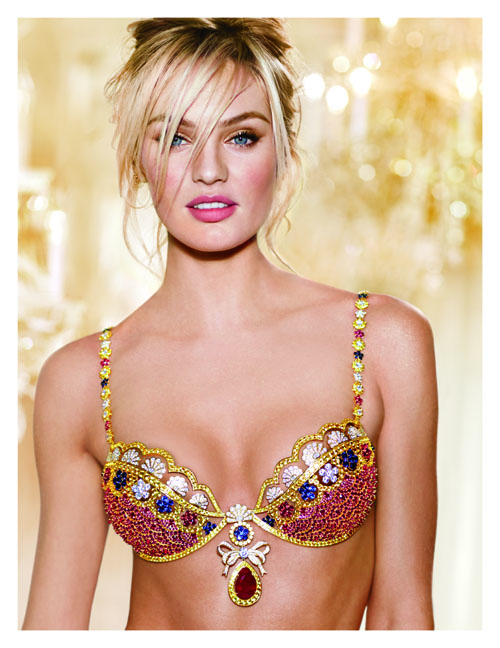 For Victoria’s Secret, Mouawad once again creates the Fantasy Bra. This one valued at $10 million and to be worn by Candace.

As regular readers here at Atimelyperspective know, we like to take a little sojourn from watches once in a while – since you can’t breathe, eat, sleep watches no matter how much you want to. Thus, we often explore other wonderful categories such as travel, cars and the like on our Weekend Sojourns. This weekend, we explore the world of high jewelry and ultimate fantasy. This $10 million Royal Fantasy Bra and Belt  — designed by world renowned Mouawad – will be worn by Victoria’s Secret Angel Candice Swanepoel  in the 2013 Victoria’s Secret Dreams and Fantasies Catalog, as well as on the Fashion Show on CBS December 10. 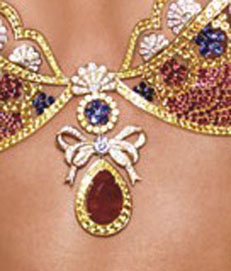 The center ruby in the Fantasy Bra weighs 52 carats.

To create this piece, Mouawad reached back to the 1960’s to pay tribute to colorful wild and sexy looks. The suite is entirely hand crafted and consists of diamonds, rubies and sapphires set in 18-karat gold. The bra is finished with a 52-carat pear-shaped center ruby.  The design is created by the family-owned Mouawad – which has been enchanting customers with its designs since 1890.

This year marks the first time Candice will wear a Victoria’s Secret Fantasy Bra – following in the footsteps of other supermodels who have worn Mouawad Fantasy Bras over the years, including Heidi Klum, Tyra Banks, Selita Ebanks and Gisele Bundchen.