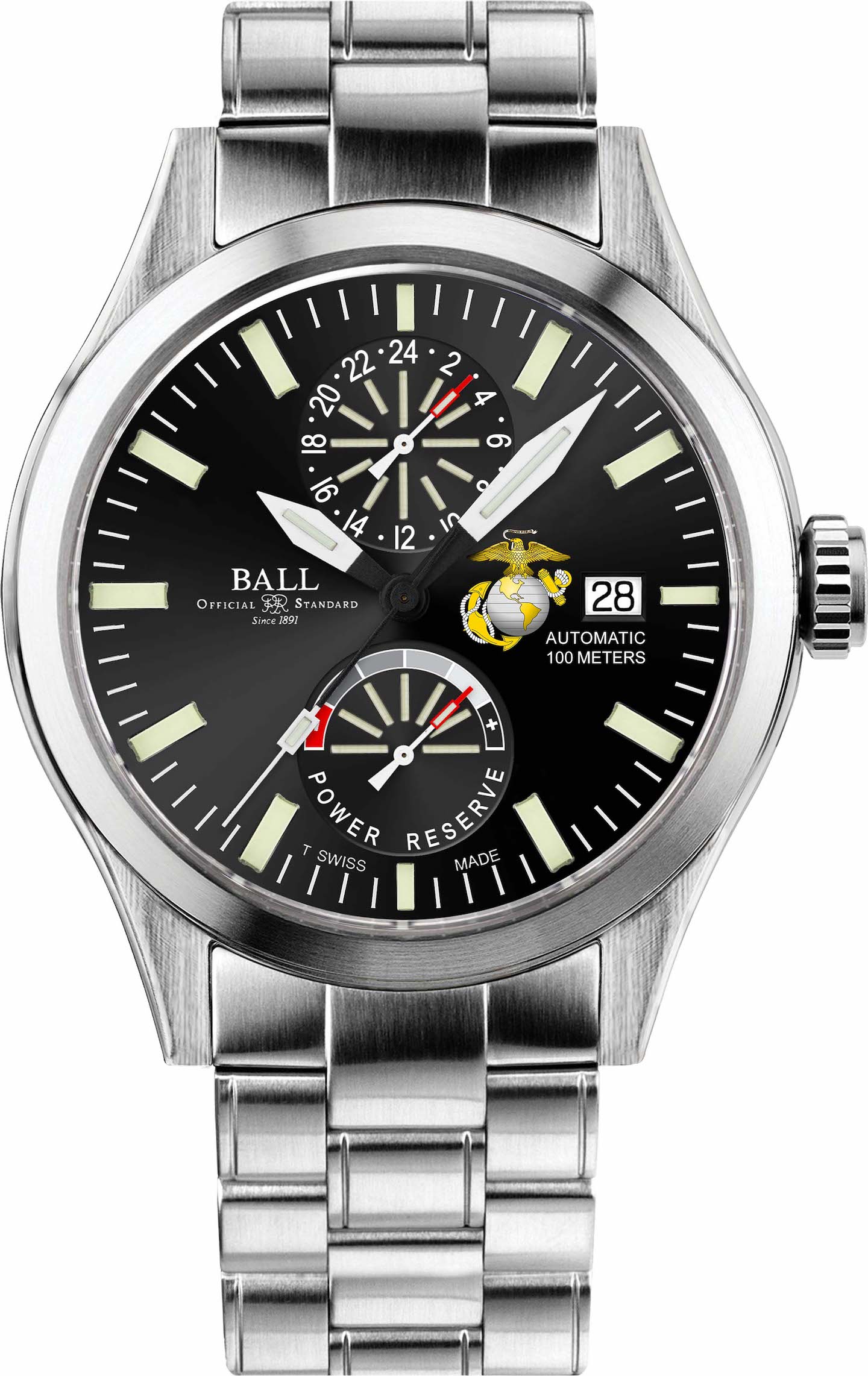 Celebrating the tough and tenacious U.S. Marine Corps, Ball Watch Company unveils the new Engineer II U.S. Marine Corps  combat watch in honor of the 245th Anniversary of the Marines. This elite corps of the American military is known for its stamina and selflessness on and off the battlefields.

Ball, with its American heritage, wanted to pay tribute to “the few, the proud, the Marines.”  It developed a series of watches that salute the courage of the Corps. The U.S. Marine Corps began in 1775, and was instrumental in our initial battle for freedom, and in all of the ensuing fights. The Corps is also always there for humanitarian events, disaster relief missions, and so much more. 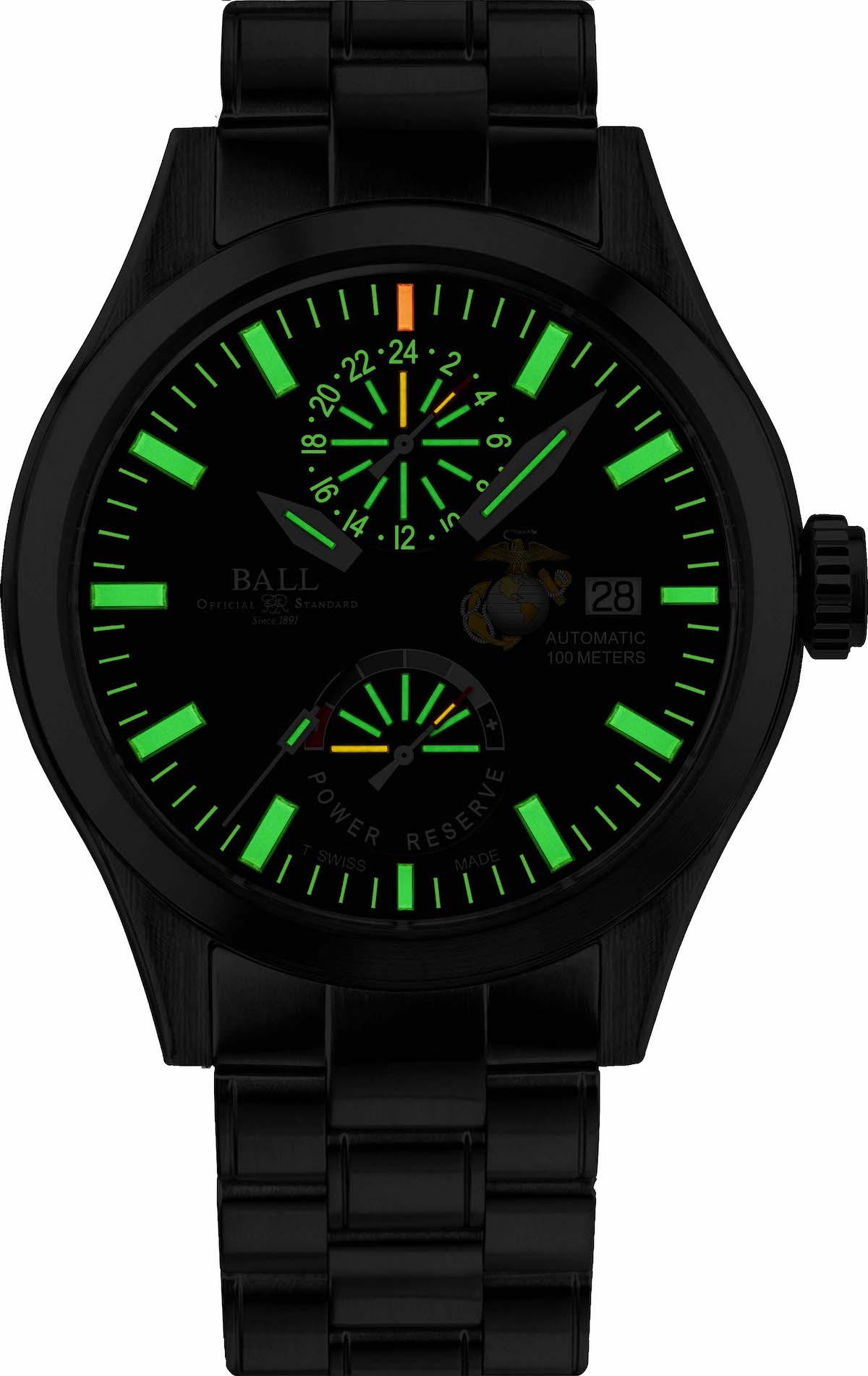 The Ball Engineer II U.S. Marine Corps watches are equipped with glass micro-tubes with H3 gas for high legibility in the dark.

Each of the limited-edition versions boasts the U.S. Marine Corps emblem on the dial. Designed as functional tools, the watches include a 3-hands piece and a GMT. Several size variations exist for each fo these stainless steel watches. Naturally readability is key for these field watches so they feature markers and hands made using glass micro tubes filled with H3 to offer ultimate legibility even in the dark.  The luminous energy will last for at least 25 years without needing external light sources.  Additionally, it is said to be up to 100 times brighter than other systems used in watches today.

The military-inspired Engineer II U.S. Marine Corps Power Reserve GMT version also features a dual time display at 12 o’clock via a 24-hour indication,  and showcases the 42-hour power reserve at 6 o’clock. It is powered by the automatic caliber BALL RR1302, whose functions include hours, minutes, sweep seconds hands and the date. Naturally, it also offers other features that are necessary to a marine or any outdoor enthusiast: it is anti-magnetic up to 4,800 A/m, and it is water resistant up to 100m/330ft thanks to its screw-down crown. Just 1,000 pieces will be made, each retailing for $1,549. 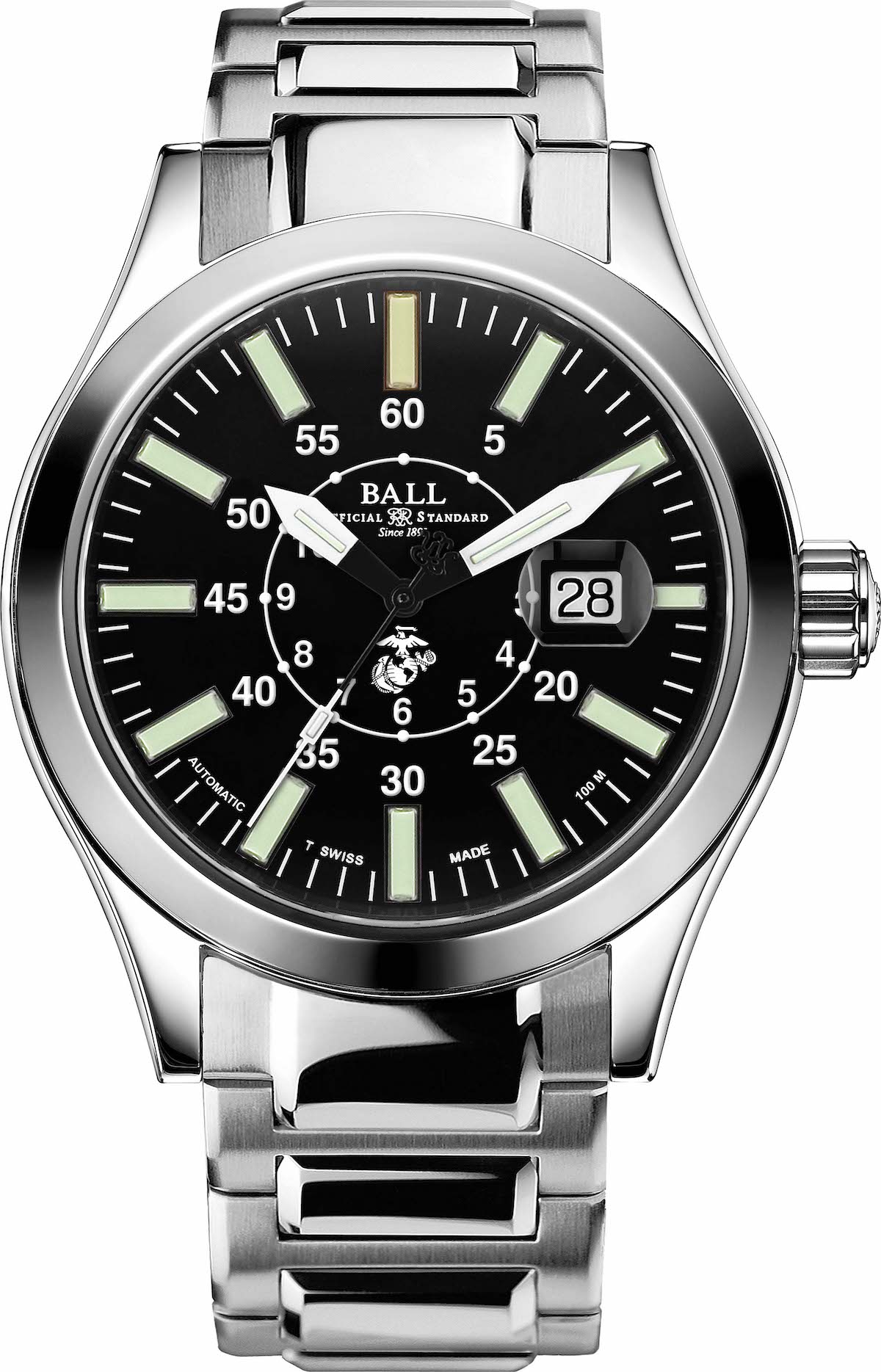 The Engineer II U.S. Marine Corps Three-hand watches are a bit cleaner and sleeker. Offered in steel or in a black titanium carbide case (TiC), the watches feature a mu-metal inner shield that protects the movement from magnetic fields up to 80,000 A/m. It is powered by the automatic caliber BALL RR1103 and offers hours, minutes, sweep seconds hands and magnified date. The steel version is sold with a steel bracelet, while the steel with TiC coating features rubber straps. It retails for $1649.

Ball has a very interesting history because of the way the company came into the forefront. Following a tragic head-on train collision in 1891 in Kipton, Ohio, the American railroad companies appointed Webster Clay Ball “Chief Time Inspector” to supervise newly synchronized timing protocols. Heretofore, the American railroads used the same lines in both directions, and on that fateful day, one of the conductors’ watches stopped for four minutes — causing the trains to collide.  It was up to Ball, a Cleveland, Ohio native, as well as a jeweler and watchmaker, to figure out how to standardize time for the railroads  instead of each town keeping its own time based o the sun’s position. 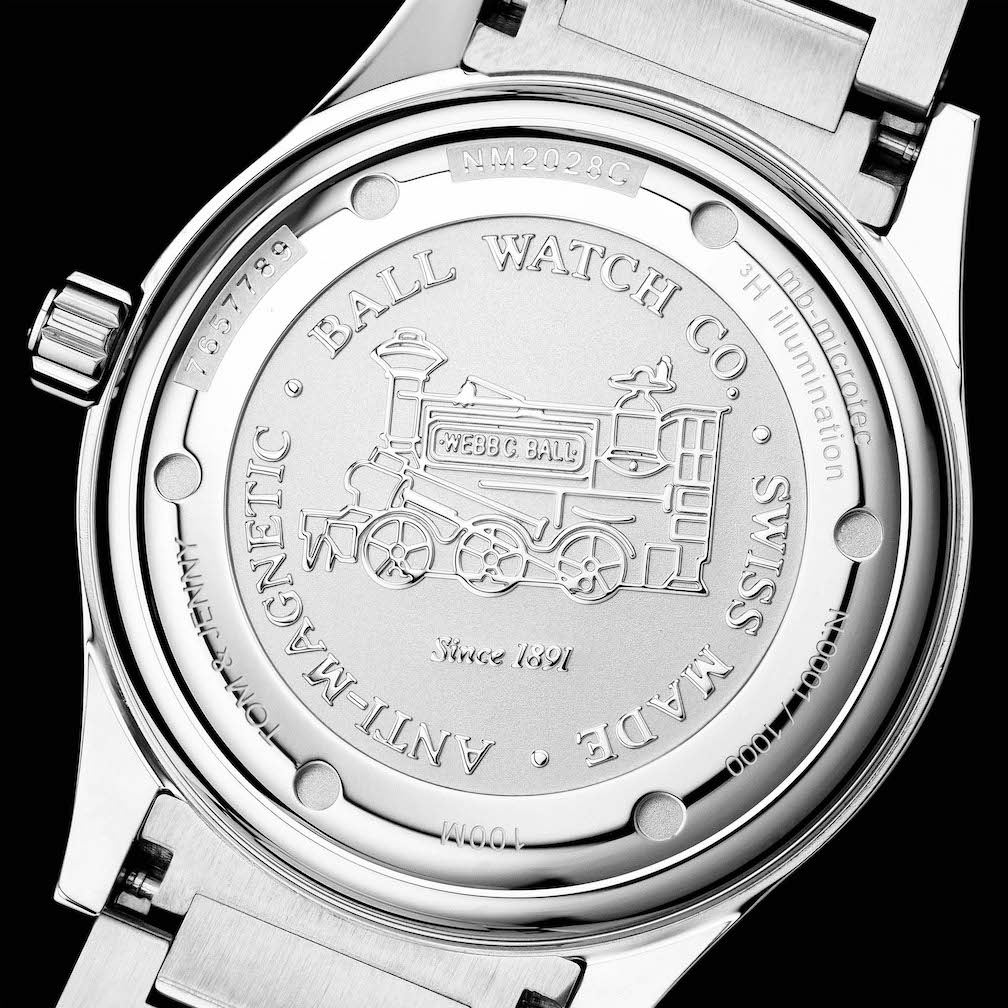 Ball Engineer II U.S. Marine Corps watches feature a glimpse of the Ball railroad history on the case back.

Ball established a standardized Rail Road time, he set further standards for the watches to be used by railroad conductors and employees. It is said that his criteria was so strict that it later provided inspiration for the C.O.S.C. In addition to establishing the RR Standard for watches, he established the Ball Time Service, an after-sales service wherein railroad employees brought their watches to be serviced every two weeks to ensure reliability. Through osmosis, his Cleveland-based jewelry business morphed into the Ball Watch Company.