Louis Moinet Watches – The Truth Behind the New York Mecanograph 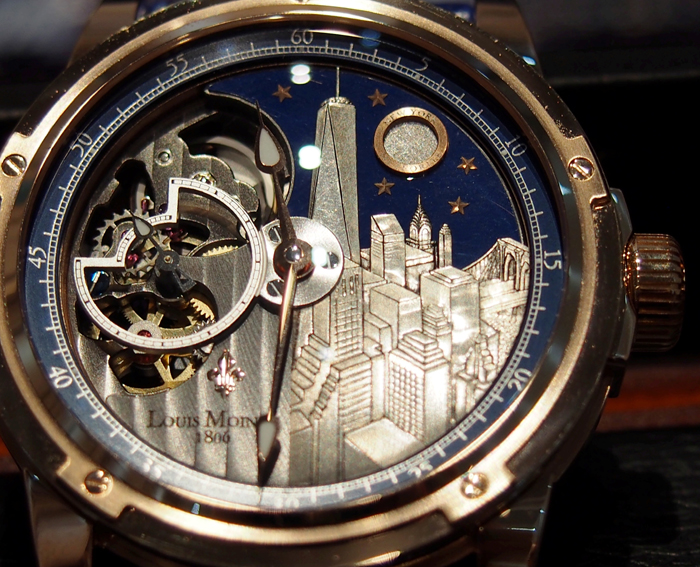 New York is awesome. Its history and diversity allow it to stand out amongst metropolises all over the world. The city boasts a population of 8 million residents and 50 million visitors a year – not to mention some of the greatest restaurants known to man.  The city is at the epicenter of a multitude of industries, cultural rights and – well – Broadway. It is the birth place of Theodore Roosevelt, Chris Rock, Michael Jordan, and so many others. It is the city of inspiration. Therefore, it seems only natural that Louis Moinet execs would choose New York as one of the first two cities of inspiration to launch the new Mecanograph Cities collection. (The other city honored in the first series is Doha.) 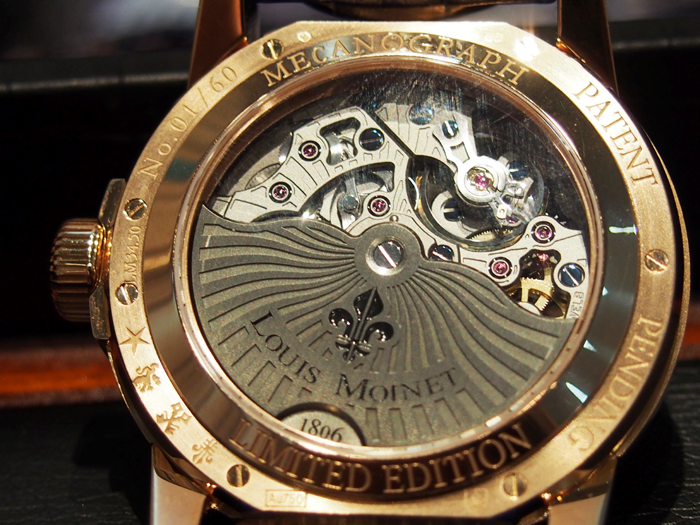 Back of the New York Mecanograph

“The simple truth is that we got access to this incredible New York meteorite that was traded in New York 100 years ago. It’s now owned by a collector but we got some of it and of course we had to use it for something incredibly special that paid tribute to New York,” says Jean-Marie Schaller of Louis Moinet. 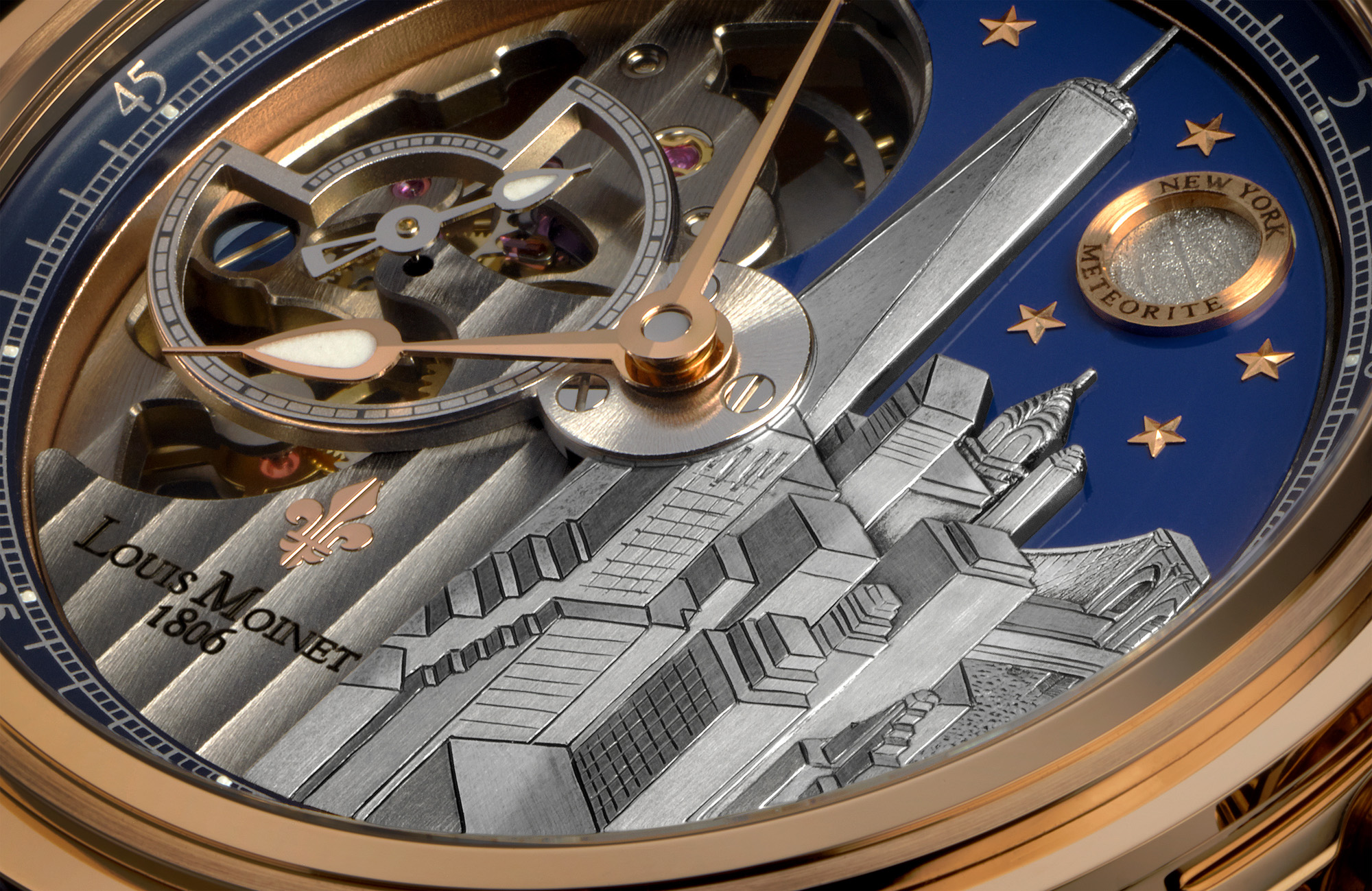 Indeed, while the mechanics of the watch are superb – typical of Louis Moinet – and the dial is entrancing, what makes the Mecanograph New York even more special is that is that it raises the bar to extraterrestrial levels by incorporating the very rare and famous New York meteorite onto its New York City skyline dial. In a small aperture sits a stone that is billions of years old, has traveled the solar system and has seen things Gene Roddenberry can only dream of.  Sourced by meteor hunter Luc Labenne, the ferrous meteorite was originally purchased in 1965 off of the captain of a fishing boat in a New York City port, who, legend has it, originally obtained it from an Inuit.  The New York Meteoritical society certified the meteorite and officially gave it the name New York, the only piece to receive the name.

The Mecanograph stands at the intersection of horology and art. The dial is hand engraved and features key elements of the New York City skyline. Prominently displayed on the dial is One World Trade, selected as it is a symbol of the city’s strength post 9/11. Also featured are other hallmarks of NYC, the Chrysler building, Empire State Building as well the Brooklyn Bridge (Brooklyn is one of the best parts of NYC). The hand engraving takes more than 20 man hours utilizing a top-secret technique.  This produces the pronounced embossing that highlights the contours of the skyline. 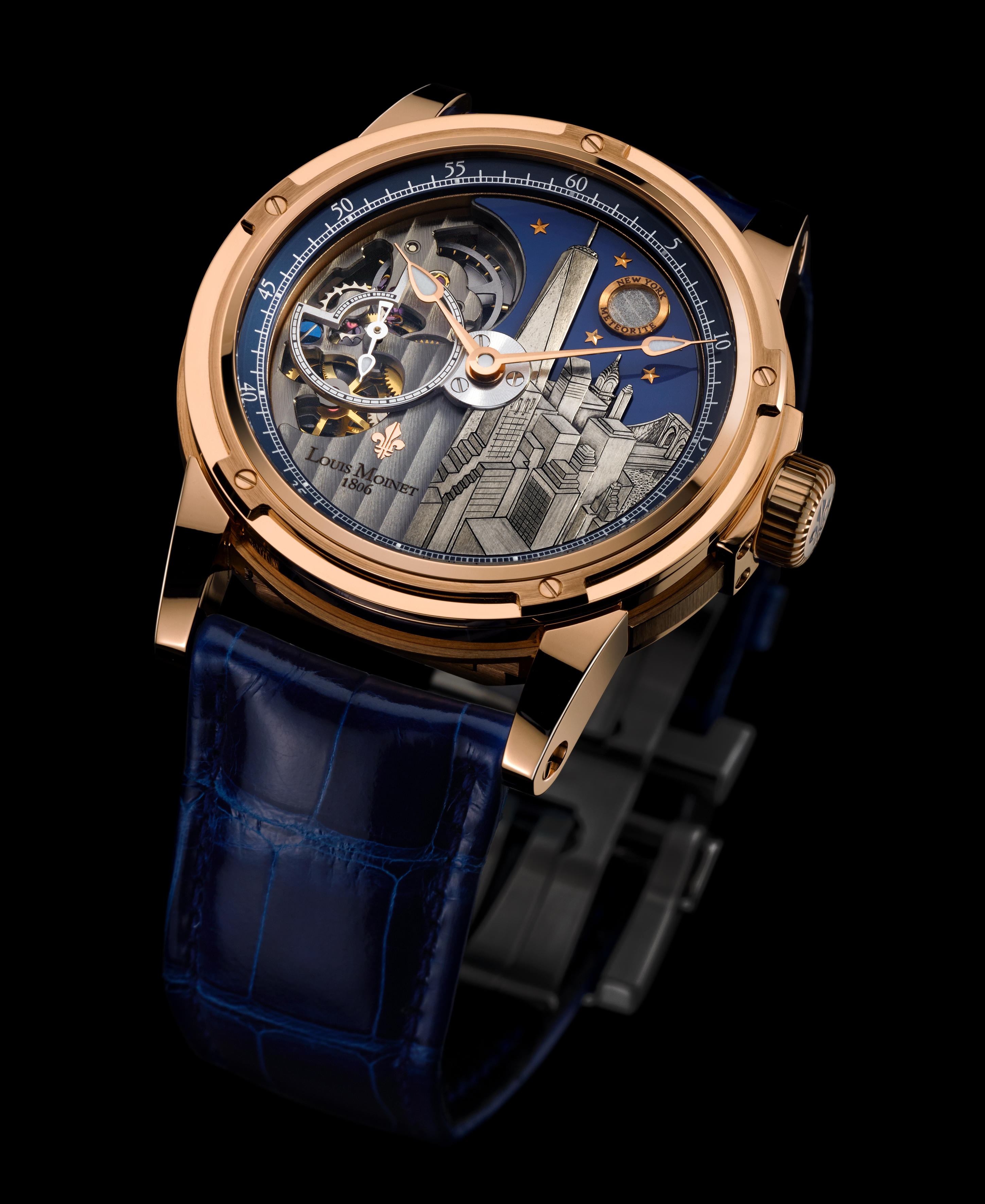 One of the benefits of collecting haute horology pieces is the ability to possess watches that are 1) ultra-rare, since many are limited runs and 2) exotic materials used in the creation of the piece. The case of the Mecanograph New York is 43 mm and at the 9:00 position the aperture in the dial displays the movement, the caliber LM31, which is a 4 Hz movement with a 48 hour power reserve when fully wound.  There will be 60 pieces produced in Grade 5 titanium (approximately $28,000) and 60 produced in 5N 18K rose gold (retailing for about $56,000).

Louis Moinet, founded in 2004 and celebrating its 10th anniversary this year, is renowned for using meteorites and other rare stones and fossils for dials. The brand, with roots dating back to 1806, was brought back to life by Jean-Marie Schaller. Named for a man who made historical contributions in watchmaking centuries ago, the brand claims that Moinet himself invented the chronograph a few years before Nicolas Rieussec. Among the notable names in history Moinet designed for are Napoleon Bonaparte and Thomas Jefferson. Moinet also authored Traite d’horlogerie, a two volume tome featuring the most sophisticated horological techniques of the time.