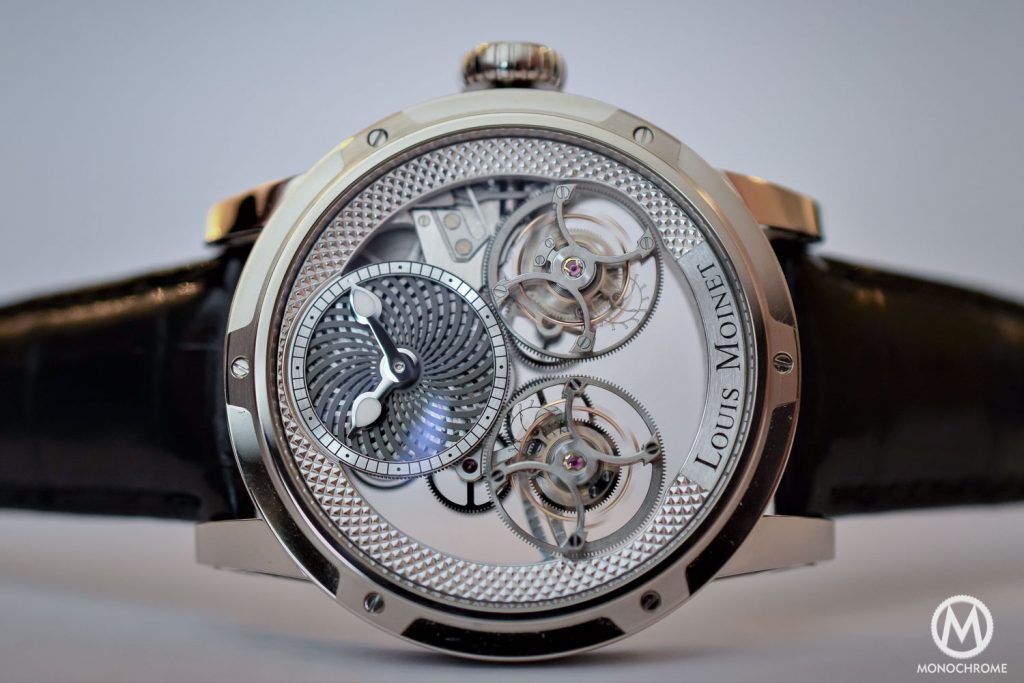 Every once in a while we see something that truly stands out from the rest — not just because it is different, but also because of its inherent beauty and craftsmanship. Such is the case with the Louis Moinet Mobilis Double Tourbillon Automaton watch that we got to spend some time with in Geneva recently. We shouldn’t be too surprised that this watch is incredible, after all we are dealing with the inventor of the world’s first chronograph. Here we bring a review of this timepiece from start to finish.

Mobilis is the first Double Tourbillon watch whose function is to power a watch complication – the first patent application of its kind. To accomplish this, two large tourbillon cages made of high-tech materials (to weigh just 0.4 grams per cage) were designed so one rotates clockwise and the other counter-clockwise (patent pending). Those two tourbillon cages power the kaleidoscope complication (made of two cut-out titanium disks) at 12:00. The disks rotate every 60 seconds. The movement is housed in an all-new, intricately designed case. We invite you to take a tour with us of this exceptional timepiece. 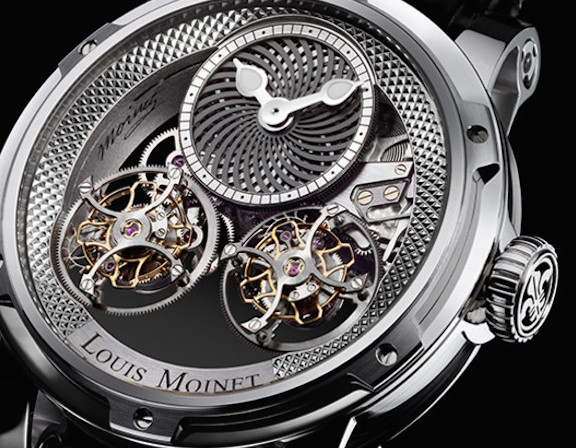 A close up look at this hypnotic skeletonized double tourbillon watch is like a walk in wonderland.To begin with,deftly placed between two sapphire crystals, the movement of this watch is exquisite. At 4:00 and 8:00 on the dial, the open-worked, constantly moving double tourbilllon escapements reside. Iin and of themselves — this is mesmerizing balanced beauty. What makes these two tourbillon  cages so unusual is that these tourbillons rotate differently in direction.

The large flying tourbillons, mounted on ceramic ball bearings, float magnificently in space — offering a clear view of the mechanical elegance and technical prowess of the watch. The manual-wind caliber LM-53 movement in the Louis Moinet Mobilis Double Tourbillon  has been developed over the course of more than a year by Louis Moinet and Tec-Ebauches. The stunning 47.4mm gold timepiece offers 52 hours of power reserve. 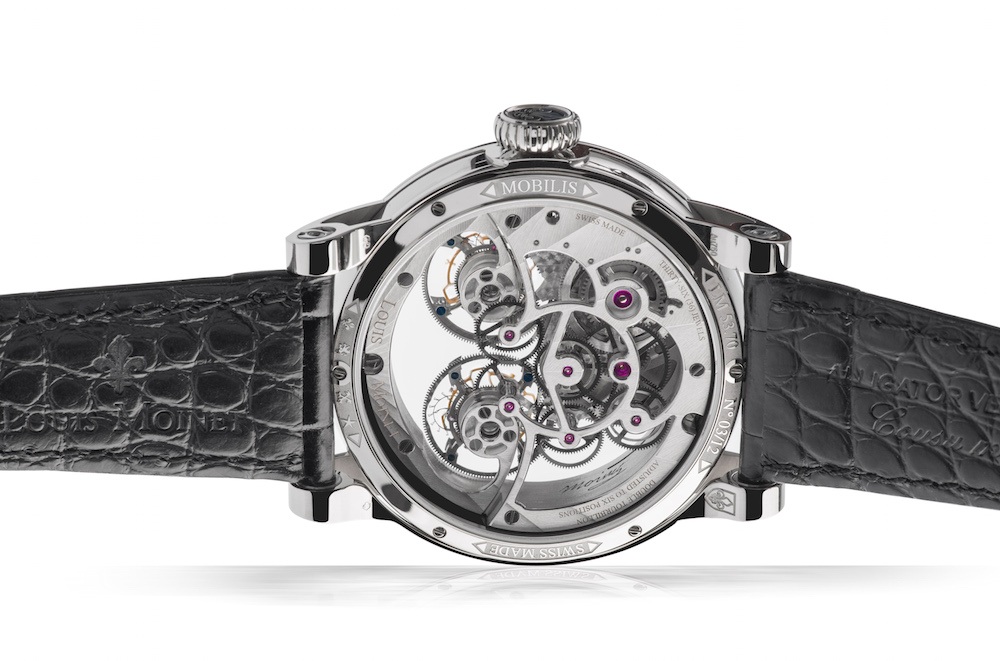 However, making the timepiece even more alluring: neatly placed centered above them at 12:00 is the delight that brings it all together: an open-worked automaton disk – powered by the tourbillon escapements via  an inverted gear system that works in tandem with two overlapping cut-out disks. The ingenious system has a patent pending. The stunning “kaleidoscope” looks a lot like the advanced art of a Spirograph, but is magnificently executed to allow light through for ultimate allure. The hour and minute hands reside on the cut-out automation disk.

The beauty of the movement is enhanced by the clean yet incredibly detailed case, which features six screws in notice protrusions on the bezel. An inner dial ring is hand-finished with a Clous de Paris motif, and the fluted crown features the signature Louis Moinet logo, the lily (also a symbol of French kings). 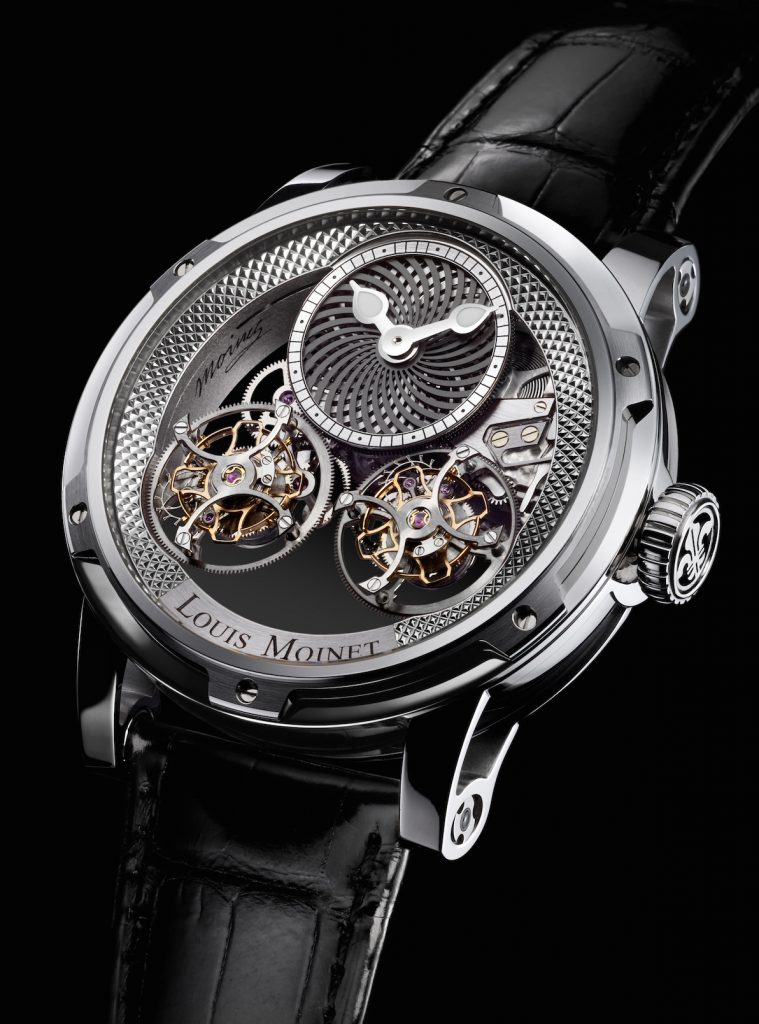 The Louis Moinet Mobiis is a significant 2017 introduction for the brand.

The Louis Moinet Mobilis watch looks wonderful, even on a small wrist. It fits beautifully thanks to the open-worked lugs, and the three-dimensional architecurre of the movement is guaranteed to catch everyone’s eye.  Unfortunately, just 12 pieces will be made — each retailing for just about a quarter of a million dollars. For me, this watch was the ultimate in both execution, craftsmanship and technology….Now, where did I put that extra 254,000 CHF? 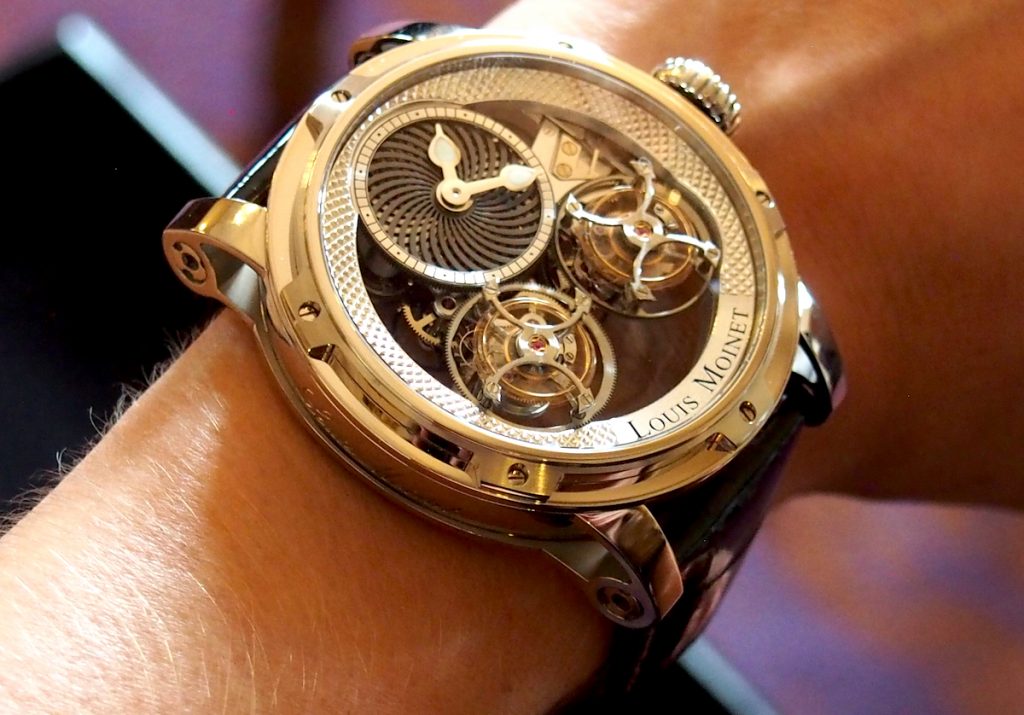 Louis Moinet Mobilis on the wrist has a beautiful fit.

For more information, you can read about the amazing technical prowess of Louis Moinet, including its use of meteorites and fossils for its ultra complications here and here.