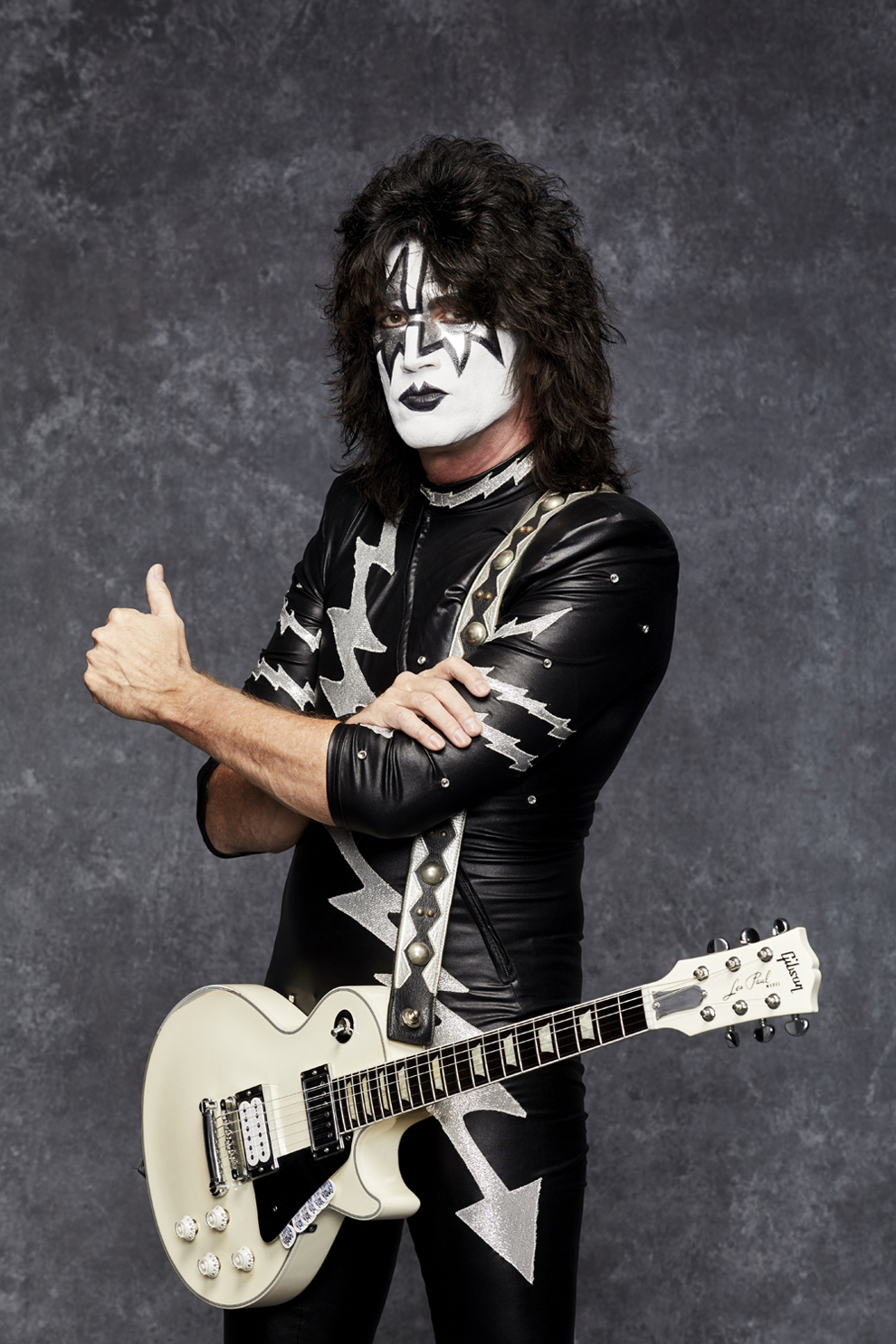 In anticipation of a big military museum fundraiser that was taking place this past weekend, KISS guitarist Tommy Thayer — known to fans around the world as the Spaceman — worked with Zenith, with the help of KISS rocker Eric Singer, on the creation of the Zenith Pilot Type 20 Extra Special Thayer Limited Edition Bronze watch honoring Thayer’s father, a decorated war hero.

I spoke at great length with the Spaceman this weekend about the watch, his father and more, just 24 hours before the big fundraising event where legendary rockers like Alice Cooper, Robby Krieger of the Doors, Danny Seraphine of Chicago, and others were performing in Portland, OR. KISS also gave a rare (un-costumed) performance at the finale. The “All-Star Salute to the Oregon Military” event raised $1.4 million with all proceeds going toward the final construction of the Oregon Military Museum named after Tommy’s father, Brigadier General James B. Thayer.

While I will post a complete interview with Tommy Thayer later this week, today we bring you the story of Thayer’s father and the new bronze watches, as well as two special pieces that you won’t be able to get your hands on (sadly).

The Brief Story of Ret. BG James B. Thayer 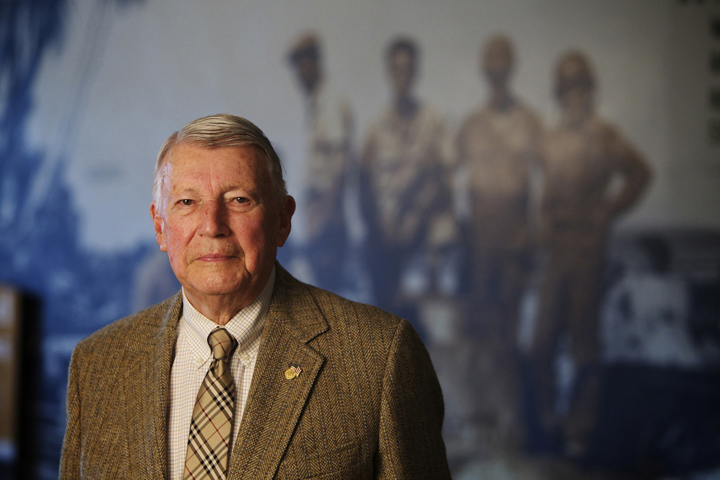 Retired general James B. Thayer, who’s being honored by having the Military Museum named after him (photo: Thomas Boyd/The Oregonian)

Thayer’s 94-year-old father, retired Brigadier General James B. Thayer, served in World War II, and is responsible for saving the lives of 15,000 Hungarian Jews in 1945. Thayer led his platoon forward in Europe through France, Germany and eventually Austria,  engaging in hand-to-hand combat with SS soldiers along the way. Finally, in Austria, Thayer (then a second lieutenant)  discovered and liberated an Austrian death camp for Hungarian Jews, explains Tommy Thayer. “It was a horrific experience, but they saved the lives of 15,000 refugees in that camp.”

For his bravery, James B. Thayer was honored with a Bronze and Silver star. Years later when BG Thayer was invited back to Austria to receive a medal for his heroism, a man who had been a 14-year-old boy in that camp found Thayer and thanked him for saving them, noting that the orders were in for everyone to be killed before the allies arrived. According to Tommy Thayer, this was a vindicating moment for his father — validating what he had been through in the war.

In honor of him and all who served in the military, the new military museum being completed in Portland has been named the Brigadier General James B. Thayer Oregon Military Museum,  and rock star Tommy Thayer naturally helps to raise private funds to complete the museum. His hope is that it opens this year, while his father is still alive to see it. This weekend’s event was one such fundraising effort. (You can read more about why the entire KISS band gets involved in these efforts on our Perfect Timing Column on Forbes.com.) 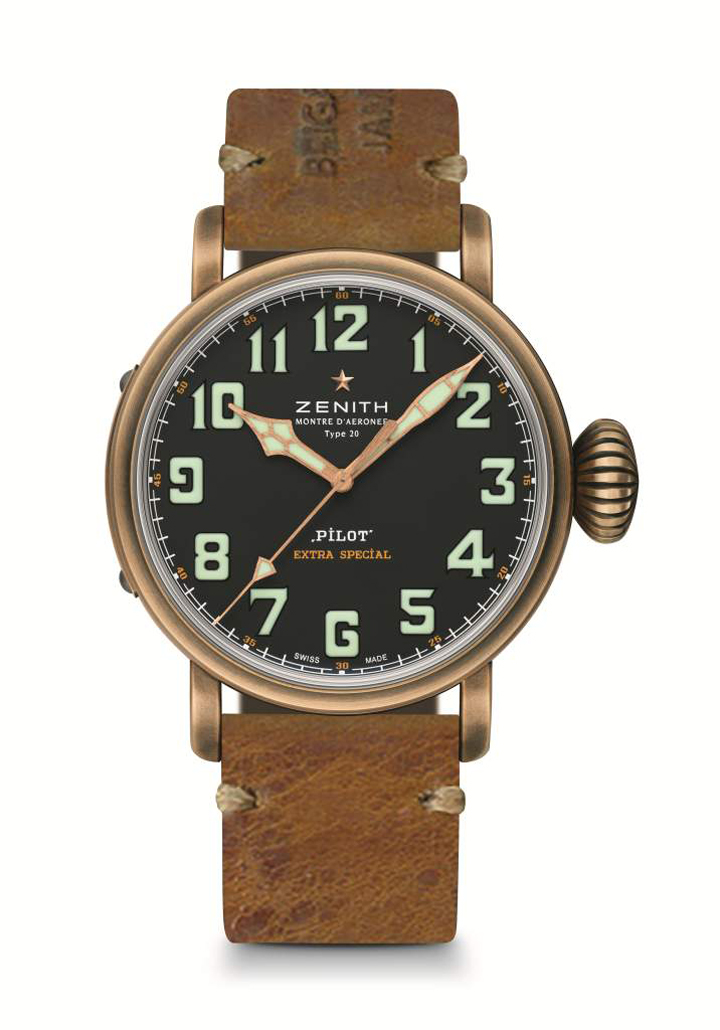 To help raise funds, Thayer and fellow band member  Eric Singer — a huge watch collector — reached out to Jean-Claude Biver, CEO of the watch division of LVMH for a commemorative watch for Thayer’s dad with the hope that they could also get a second watch to auction at the event.  “Eric is the one who initially suggested we reach out to Jean-Claude Biver, who was very excited about the cause,” says Thayer. “Eric  helped steer me in the right direction about which watch style to choose and worked with me and Zenith throughout the project.”

Ret. BG Thayer’s World War II story most closely aligned with the  Zenith Pilot Extra Special watch and it was decided that not only would Zenith make a commemorative watch for Thayer, with an identical second watch to be auctioned at the event, but also would make a limited edition of 25   Zenith Pilot Type 20 Extra Special  Thayer Limited Edition Bronze watches. 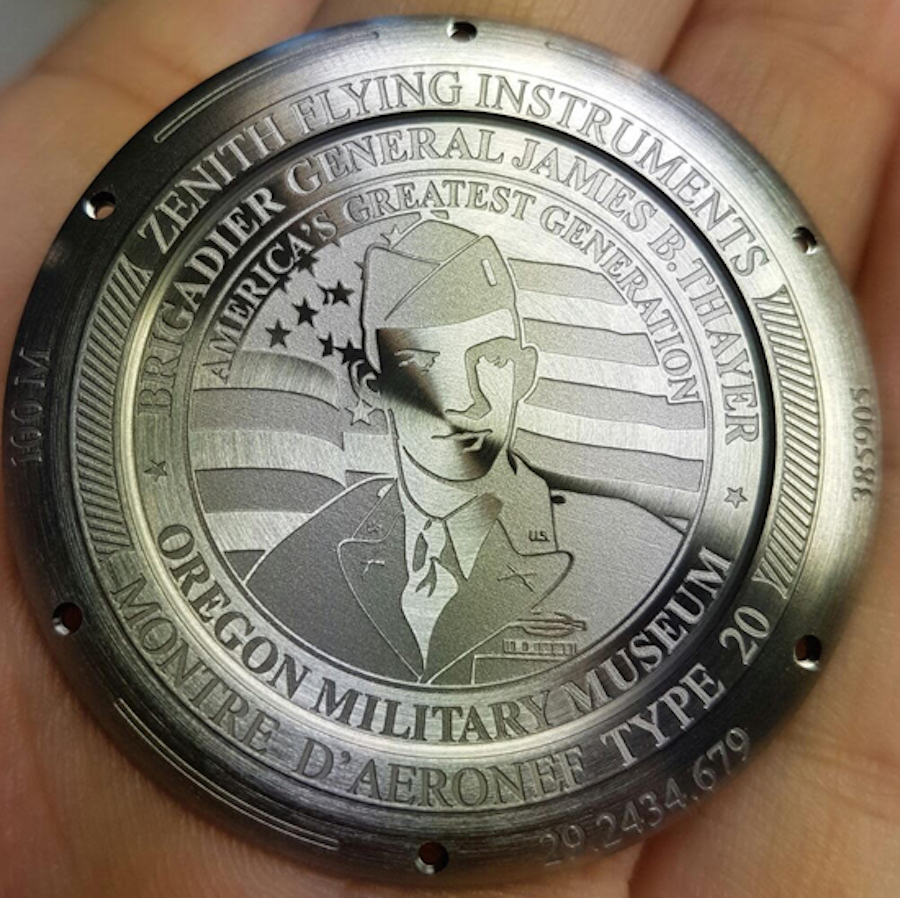 The 25 Zenith Pilot Type 20 Extra Special Thayer Limited Edition Bronze watches are super alluring thanks to several features, perhaps the most exciting being the incredible strap made of World War II leather ammunition bags. The special strap was Singer’s idea. The calfskin ammunition bag leather strap features a protective rubber lining and is the perfect finishing touch for the 45mm case crafted in bronze. Between the bronze case and the ammunition bag strap- this watch is a real winner.

The Zenith Pilot Type 20  Extra Special Thayer Limited Edition Bronze watch house the automatic Elite caliber 679 with 126 parts and 50 hours of power reserve. The watch features a domed sapphire crystal with anti-reflective treatment on both sides and has a titanium case back engraved wit ha tribute to BG James B. Thayer. The hands are Super LumiNova. The watch retails for $7,200 and ! $1000 of the sale of each watch will go to the museum fundraising. 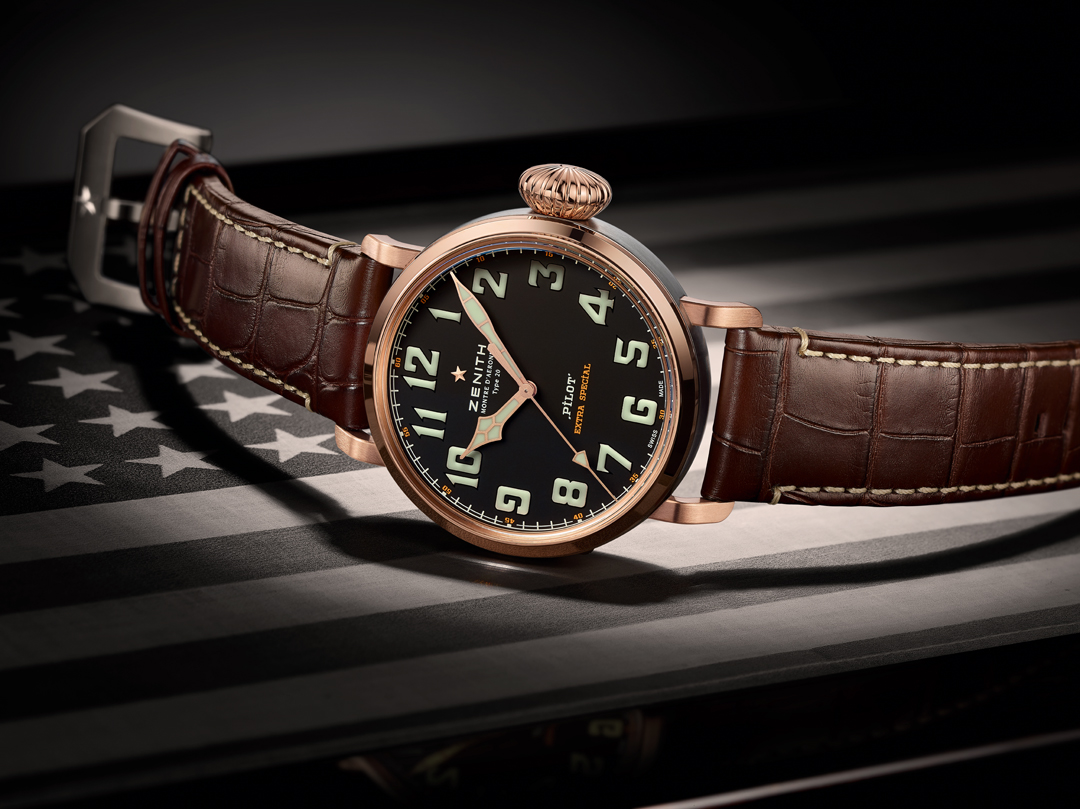 The commemorative Zenith Pilot Type 20 Extra Special Thayer Limited Edition rose gold watch made for ret. BG Thayer  — and its double made for auction  — are created in 18-karat rose gold and titanium, and feature an engraving on the case back of James B. Thayer in uniform along  with the Oregon Military Museum name on it. The 45mm commemorative watches house the same automatic Elite caliber 679 as the bronze pieces, but are finished with an alligator strap instead of the ammunition bag strap. Each is  presented in a special box  with a 48-star flag and a letter from ret. BG James B. Thayer about his experiences. The first watch was given to ret BG Thayer Saturday night at the fundraising event, and the second watch, estimated at about $14,000 retail, sold at auction  at the event for $40,000. 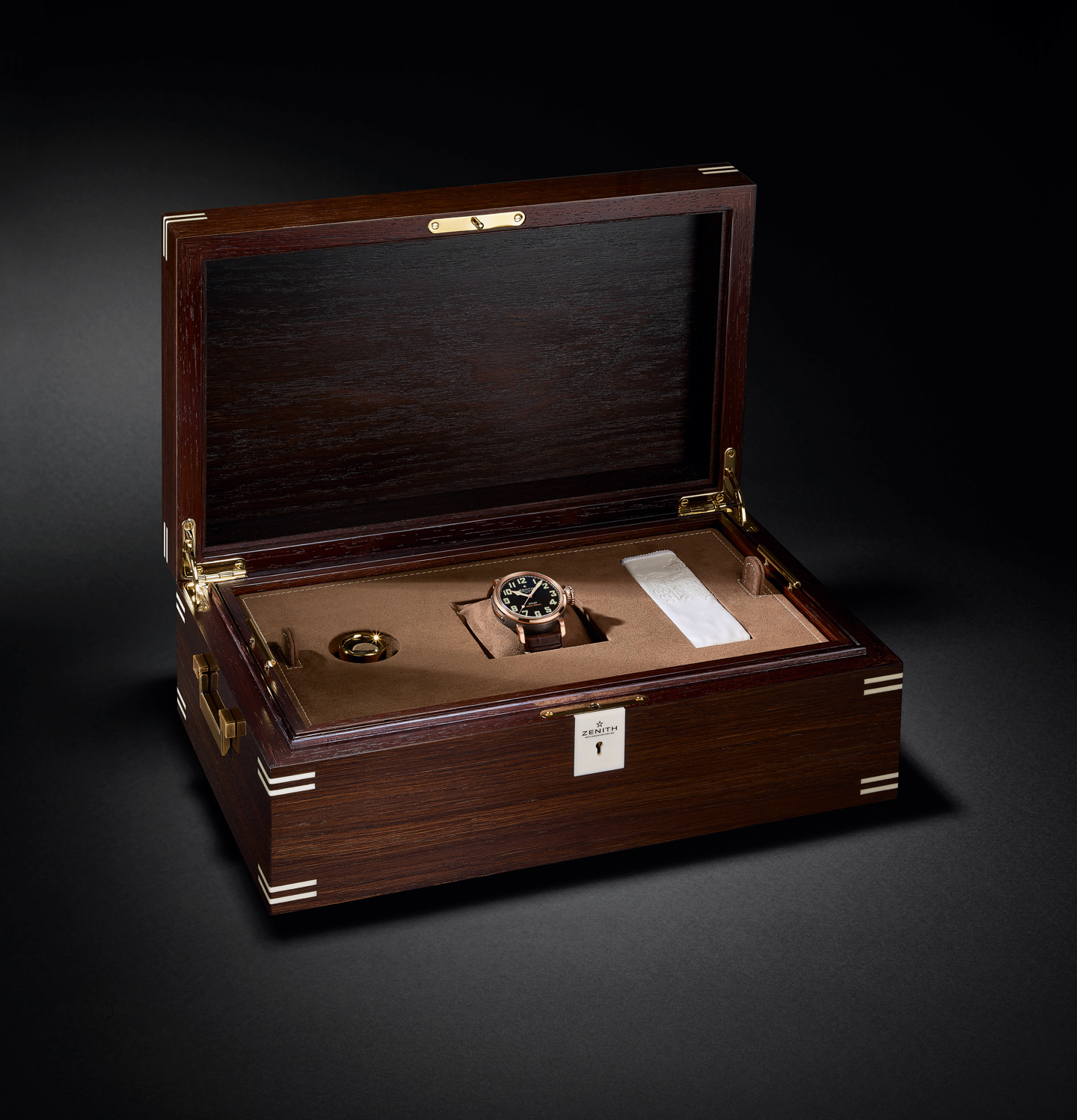 The Zenith Pilot Extra Special Limited Edition Thayer 18-karat rose gold and titanium watch is presented in a specially made box with a 48-star flag.