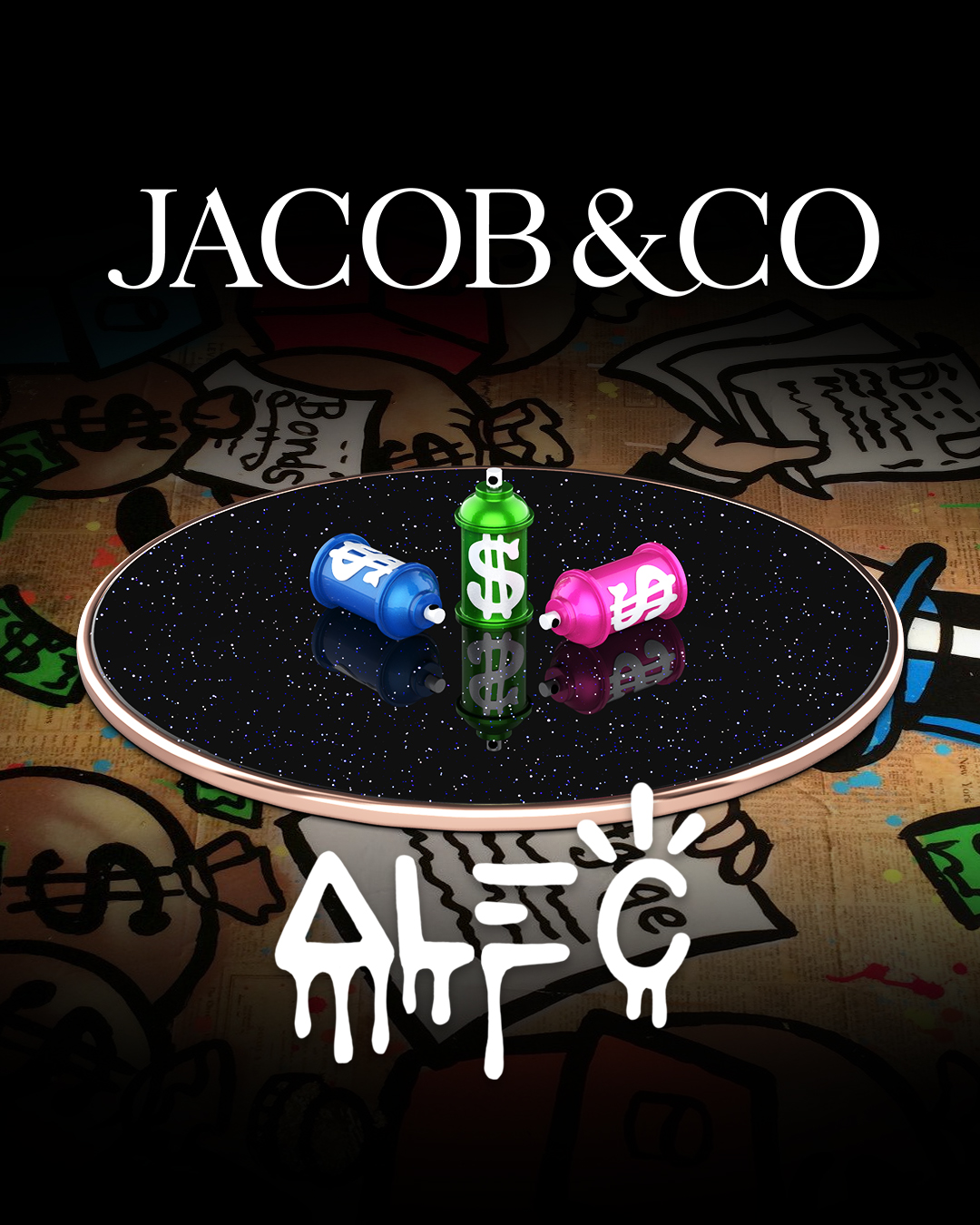 Recently, Jacob & Co. announced a partnership with graffiti artist Alec Monopoly. Monopoly previously had a partnership with TAG Heuer, so he is no stranger to the watch world.  This first collaborative effort with Jacob & Co. if the fruit of great co-mingling, with the result being a highly colorful art piece based on Jacob & Co.’s famed Astronomia three-dimensional watches. The  Astronomia Alec Monopoly watch , with four-arm vertical movement with complications, features tiny characters found in Monopoly’s work.

Crafted in 18-karat  rose gold, the watch boasts a sapphire crystal and fours sapphire case sides for easy viewing of the movement and the animation inside. Against a sleek backdrop base that emulates a black night sky with stars, the signature Jacob & Co. Astronomia revolving double-axis  tourbillon — opposite the revolving watch dial placed on a patented differential gear system  — is perpendicular to the arm that boasts the three-dimensional hand-lacquered magnesium Earth globe on one side and a Jacob & Co. proprietary faceted Jacob Cut one-carat diamond with 288 facets on the opposite side. The diamond makes one rotation per minute. The highly complex JCAM10 caliber boasts 365 parts and offers 60 hours of power reserve. 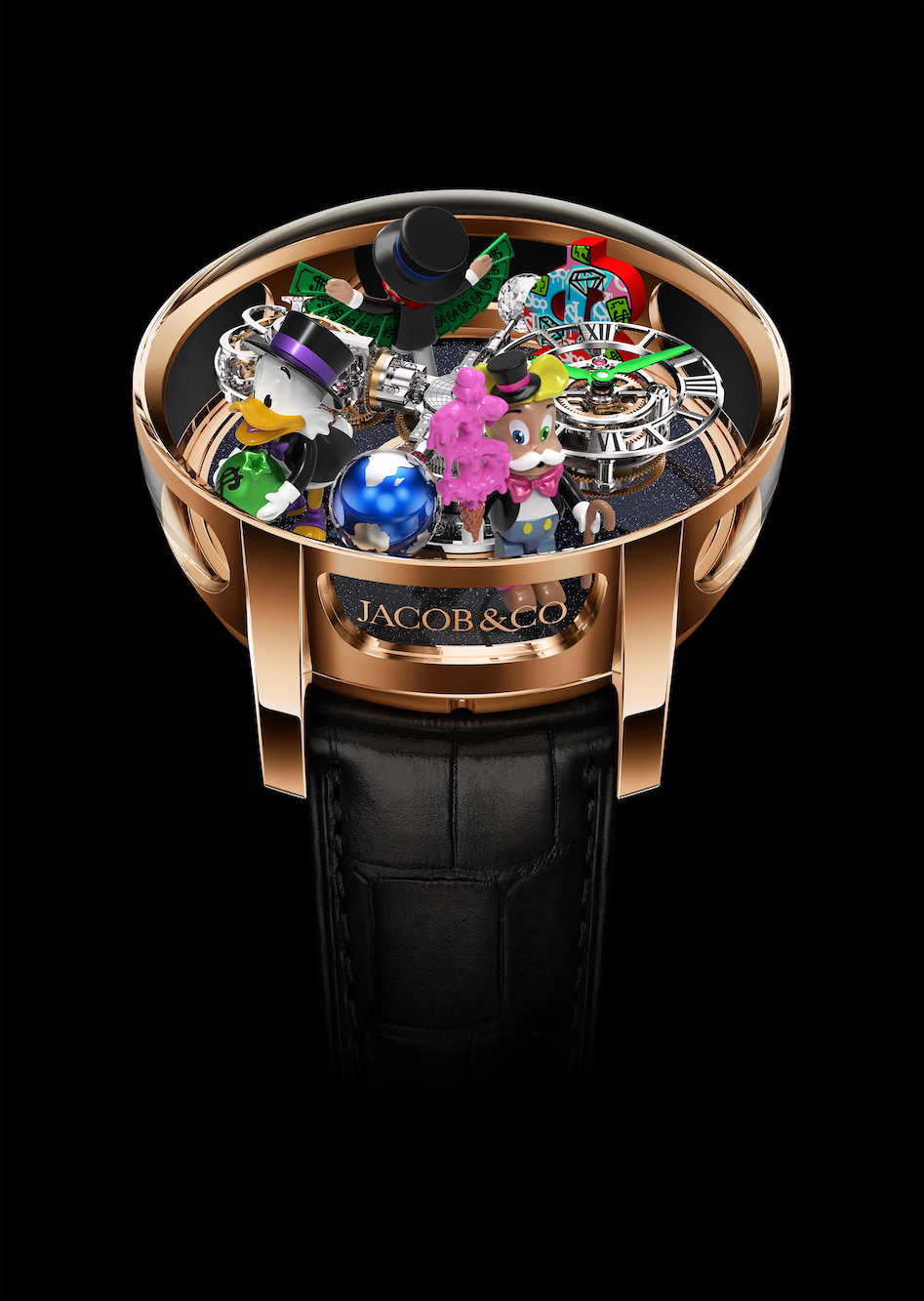 Jacob & Co. Astronomia Tourbillon Alec Monopoly watch features all the high-tech mechanics you expect from the Astonomia Tourbillon along with some fun mini sculptures that make the watch even more of a toy and collectible.

These rotating complications, though, take a backseat in this watch to Alec Monopoly’s art, which comes into play in the form of  whimsical three-dimensional characters and bold colors. To begin with, the hands on the watch dial are bright lime green, a signature Alex Monopoly color. Other colors range from hot pink to bright red, and more.

The watch boasts four mini sculptures. One is based on “The Monopoly Man” (inspired by the boardgame of the same name) and is a top-hatted figure holding dollar bills out in each hand like and Money Wings figurine. Opposite him I another top-hatted man with white mustache holding what appears to be a dollar-sign melting pink ice cream cone in his hand. The other two figures  are Monopoly’s interpretation of Scrooge McDuck holding a bright green money bag with gold coins laying at his feet, and a dollar sign with diamonds and dollar bills painted on it, along with the Jacob & Co. logo.

The bright colors make this watch look almost like a toy – a purposeful effect. The characters are hand-sculpted based on drawings by Monopoly that are computer scaled to fit inside the watch without impeding the movement and the rotating complications. The small gold sculptures are then hand painted by Monopoly using the acrylic paint that defines his trademark art. While Monopoly’s street graffiti can span three-story tall buildings, the watch figurines are the smallest canvas he has worked on to date.

The tiny sculptures on the Jacob & Co. Astronomia Tourbillon Alec Monopoly watch are crafted in gold and then hand-painted by Alec Monopoly.

“This is by far the smallest scale ‘canvas’ I have ever painted. Every element, brushstroke and color choice needed to be carefully thought out and perfectly executed,” says Monopoly. “My street art murals are often free flowing and wild but given the intricacies and meticulous mechanics within these watches, I needed to approach the creative process with much more precision and patience.”

From every angle, the Astronomia Monopoly is a rare expression of street art, tiny toys, superb mechanics and odd character. Jacob & Co. has a tag line of  “Inspired by the Impossible” and the most recent outrageous timepieces unveiled by the brand, including this one, underscores that motto. Just nine pieces will be made of this artistic Astronomia Monopoly watch.