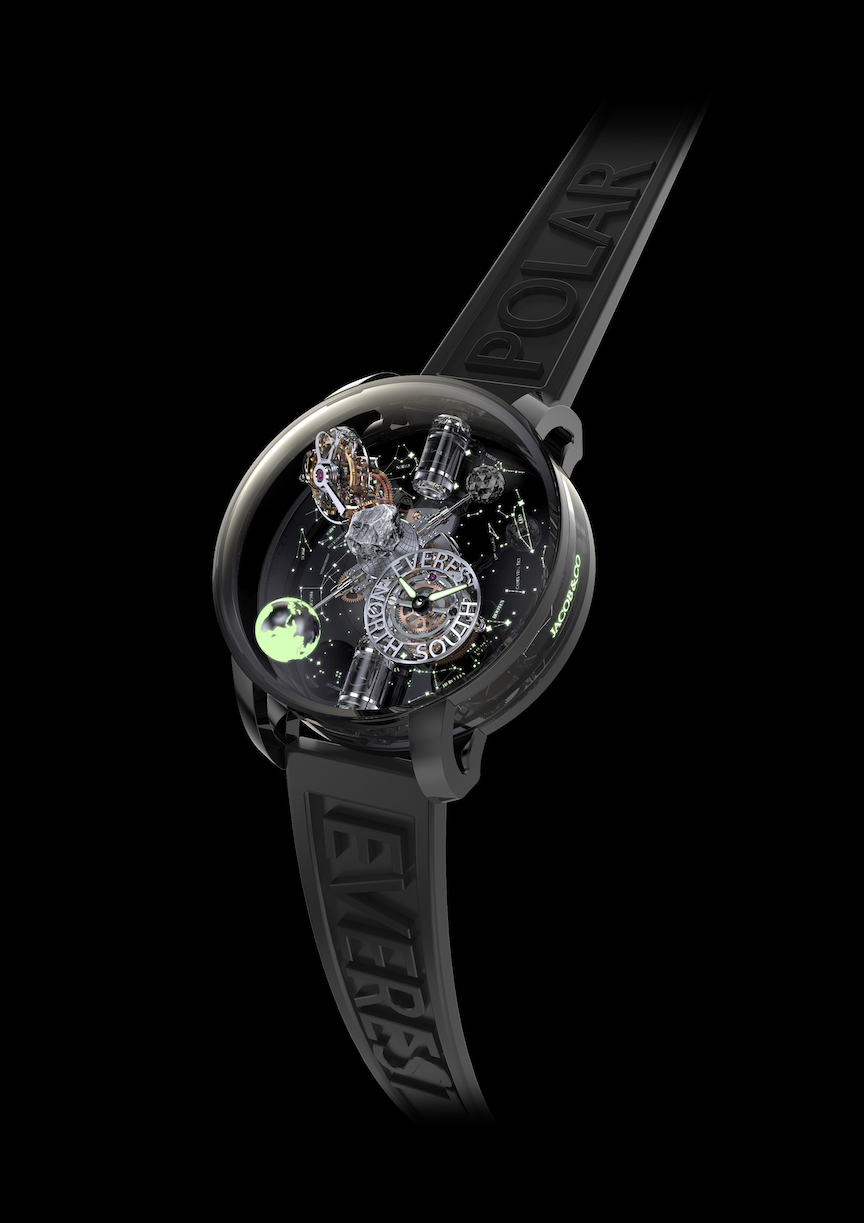 There’s a lot going on with the newest Jacob & Co. Astronomia Tourbillon. In fact, one might say the Astronomia Mount Everest watch tops all other Astronomia watches. Partnering with Swedish explorer and environmentalist, Johan Ernst Nilson, Jacob & Co. creates a limited edition watch that actually has a piece of rock from the legendary mountain inside.  That’s not all, though, the watch is sold with a helicopter experience that takes the buyer onto Mt. Everest with Nilson. There is even a charity component behind the watch.

it was just about two years ago that adventurer Nilson took an Astronomia Tourbillon watch with him while climbing the Himalayas. He climbed 6,200 meters and the watch continued to work despite minus-30-degree temperatures and the high altitudes. Now, Nilson – also a keen environmentalist – works with Jacob & Co. for the Astronomia Everest watch that incorporates elements from Nilson’s three most-accomplished expeditions: a trek to the North Pole, to the South Pole and his Mt. Everest climb. 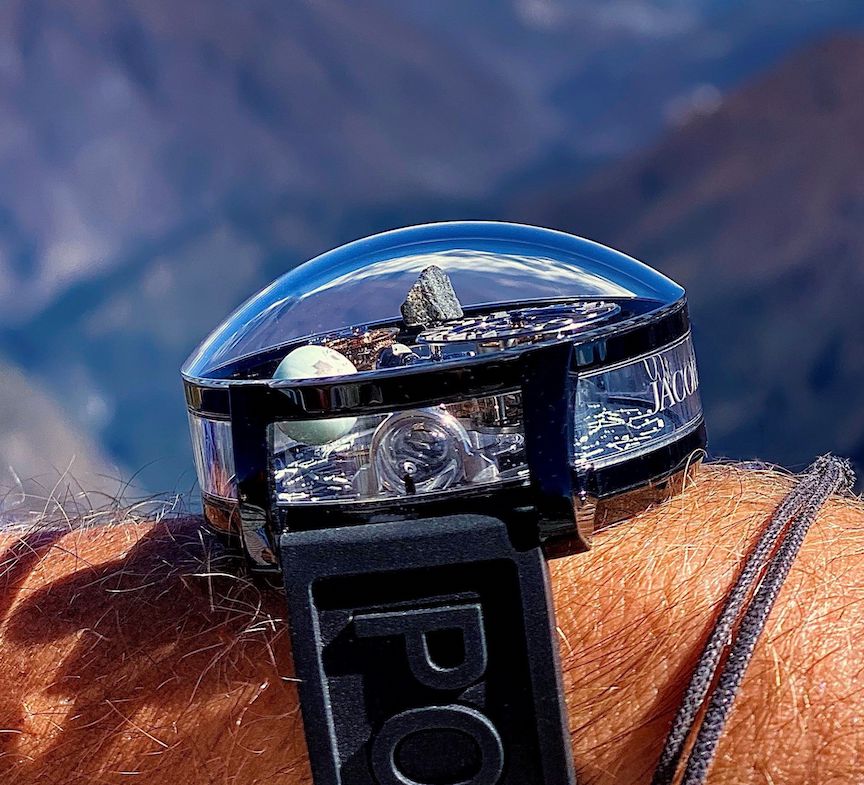 The Jacob & Co. Astronomia Mt. Everest created with explorer Johan Ernst Nilson houses a shard of rock from Everest in it and two “buckets” of water collected by him in the North and South poles.

As mentioned, there is a shard of a rock that Nilson collected from Mt. Everest in each watch. Additionally, there are two clear capsules that emulate buckets that Nilson used to collect water at each of the poles. Water from the poles is actually inside each of the capsules in an effort to celebrate Earth and its fragile environments.

The watch, which retails for $884,800  — reflecting the height of Mt. Everest (8,848 meters), is also an incredibly complicated timepiece. Based on the brand’s beloved Astronomia Sky Tourbillon watch, the timepiece boasts a double-axis gravitational tourbillon on one of four satellites. The other three satellites feature a one-carat 288-faceted Jacob-cut diamond, a constantly rotating magnesium globe and the hour/minute dial.

This Astronomia Mount Everest marks the first time the brand uses Super-LumiNova for the hands, the glove and the constellations on the background. There is even Super-LumiNova on the strap. There are two versions of the 47mm watch, one with a black dial and crafted in blackened 18-karat white gold, and one with a blue dial and crafted of 18-karat white gold. Just 12 of each will be made, for a total of 24 watches  (representing the world’s 24  main time zones). 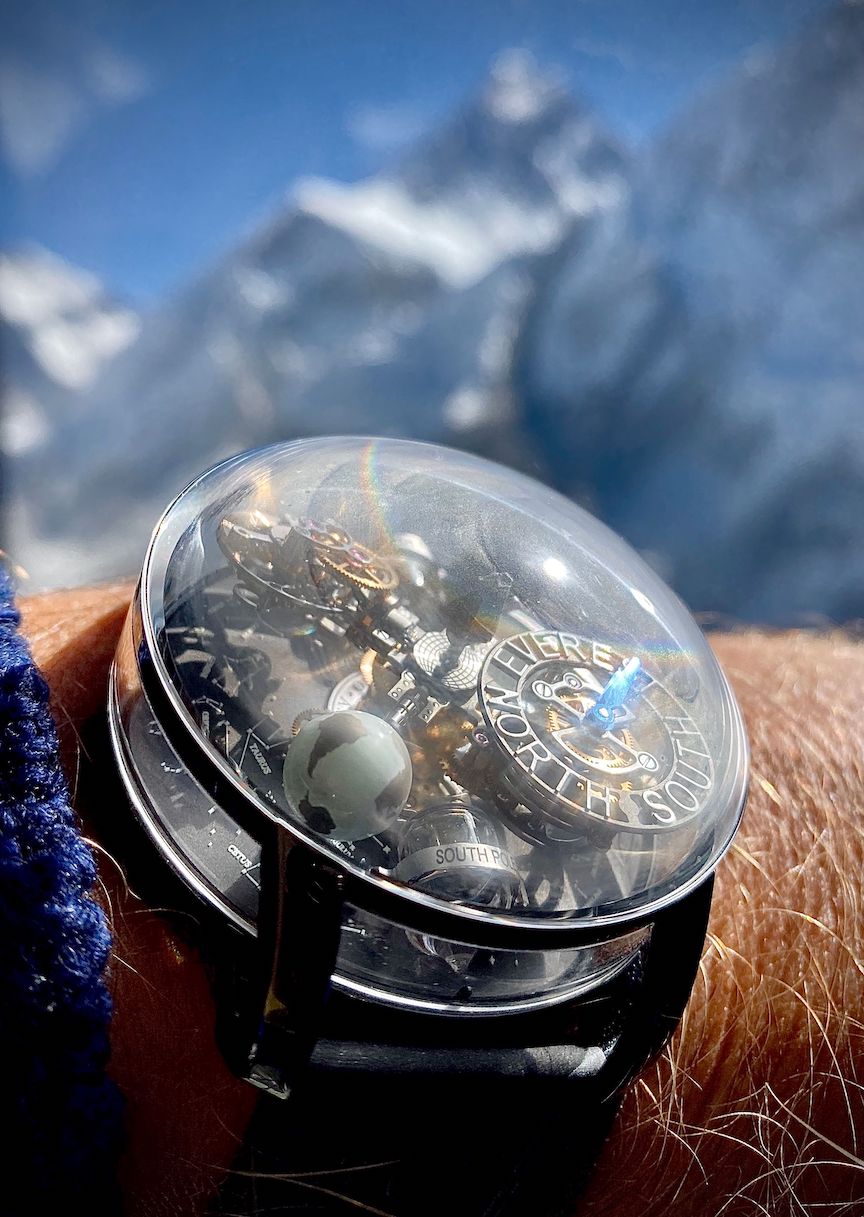 Ten percent of the proceeds of the sale of each Jacob & Co. Astronomia Mt. Everest created with explorer Johan Ernst Nilson goes to causes for sustainability.

Additionally, and maybe most importantly, the watch also has a charitable component, in that 10 percent of the proceeds of the sale of each watch goes to organizations that are helping the environment.

Nilson, who has climbed the Seven Summits and holds a place in the Guinness Book of World Records for his Three Poles Challenge expedition, has witnessed climate change and its consequences in some of the most remote parts of the world.

“I want this special timepiece to help make a change in the world,” says Nilson. “The Astronomia is the only watch I’ve ever had people ask me about while I am wearing it, so we will be starting conversations that hopefully will lead to change. This special edition will spread the word about the fragility of our planet.”

Because the watch celebrates ethe beauty and fragility of Earth, Jacob & Co. and Nilson added an adventure to the purchase. Every buyer receives a helicopter trip for two with Nilson to the spot on Everest where he took the rock that is used for the watches. 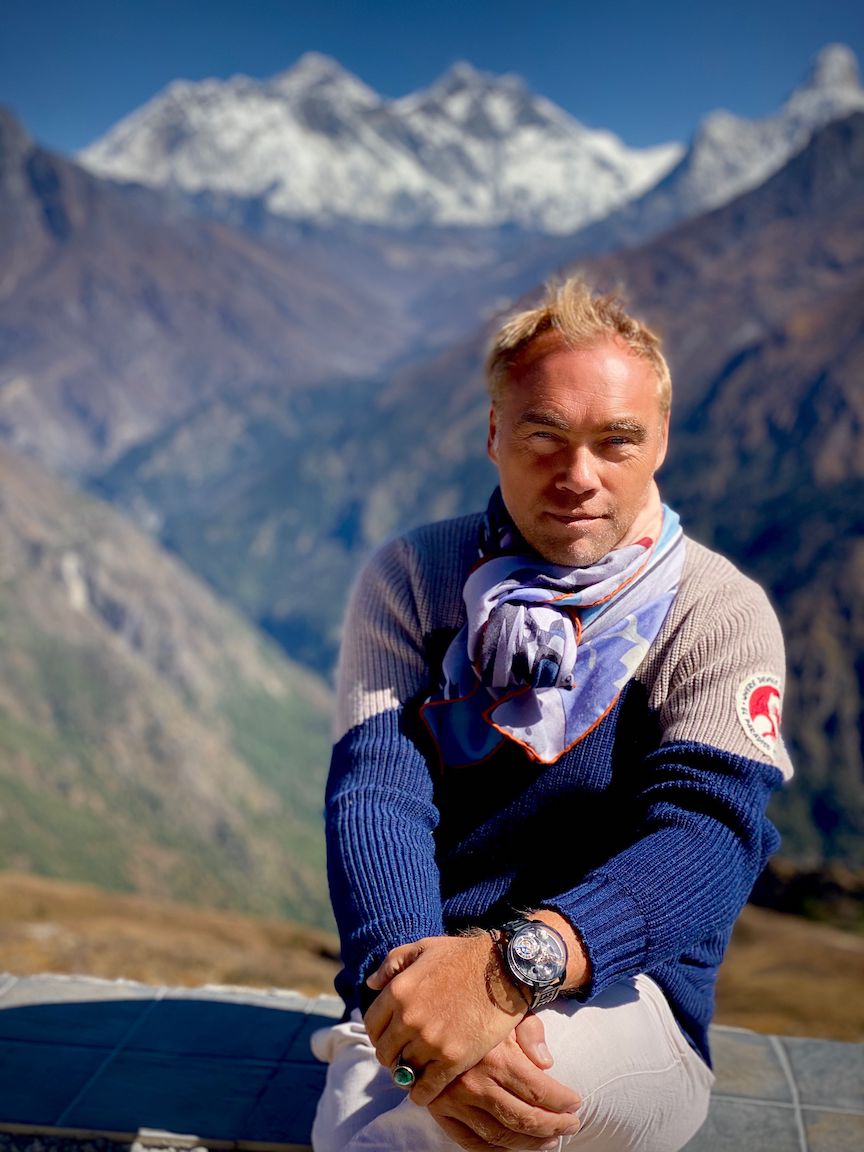 “Raising awareness about the dangers facing our planet is important,” says Jacob Arabo, founder of Jacob & Co. “Working with well-known adventure activist Johan Ernst is a great way for our brand to get involved. Having a portion of the proceeds of the sale go to charity was vital for us — we all have to take action if we are going to make a difference.”

(This article by Roberta Naas was first published on her column in Forbes.com.)