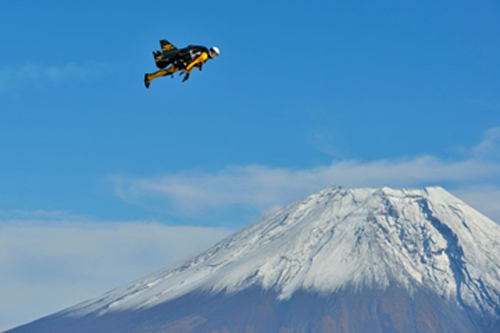 Even though some may be wishing for Superman… the man/bird flying in the sky over Mt. Fuji in Japan recently was Jetman. The pictures are real even though they look surreal and almost too wild to believe. But Jetman, AKA Yves Rossy, has been racking up the frequent flyer miles in unimaginable style.  What’s more, the 56-year-old Swiss aviator and ex-fighter pilot is sponsored by Breitling—the Swiss brand that builds instruments for professionals.

Rossy started developing the Jetman project 20 years ago, and completed his first significant feat in 2008—when he cross the English Channel — albeit- flew across.  He has made a few other important flights since then, but the most recent (yesterday) was 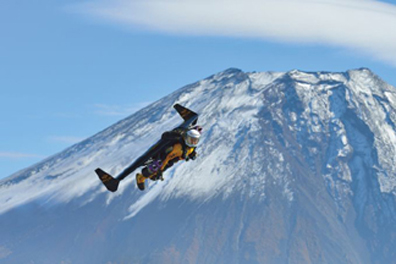 flying above the snow-capped peak at up to 185 mph, looping, rolling and performing aviation aerobatics  with his  carbon-Kevlar® wing powered by four Jetcat engines. Rossy propels himself through the sky via a throttle in his hand and uses his legs, shoulders and body to pitch and descend.

Says Rossy about flying in Japan, “It is such a contrast flying free with just a wing on my back, compared to being in a cockpit as an airline pilot. It is hard to describe the emotions and feelings of having an opportunity like this. It’s spiritual, it is immense. I am the lucky guy who gets to do this, but I hope I can motivate the next generation of forward thinkers to do something different, to strive and achieve their goals… e 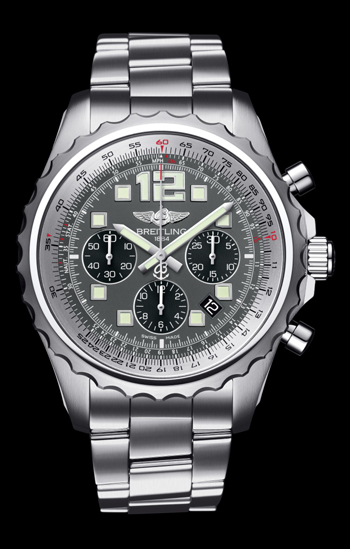 Breitling Chronospace Automatic has a Breitling 23 caliber, a minimum power reserve of 42 hours, and a diameter of 46 mm. It retails for $6,700.

ven if it seems impossible.”

So, what watch does the Jetman journey with? He owns several Breitling watches, including an Emergency that he used in 2009 when he was attempting a 23-mile flight over the Straight of Gibraltar. One of his wing engines failed mid-flight and he used the Emergency’s antenna to signal rescue teams his location in the water.  He also owns a Breitling Chronospace Automatic.

Top 10: The Most Comprehensive Look ‘Year of the Rabbit’ Watches
November 7, 2013

Introducing The Vacheron Constantin Year Of The Rabbit Watch
November 7, 2013