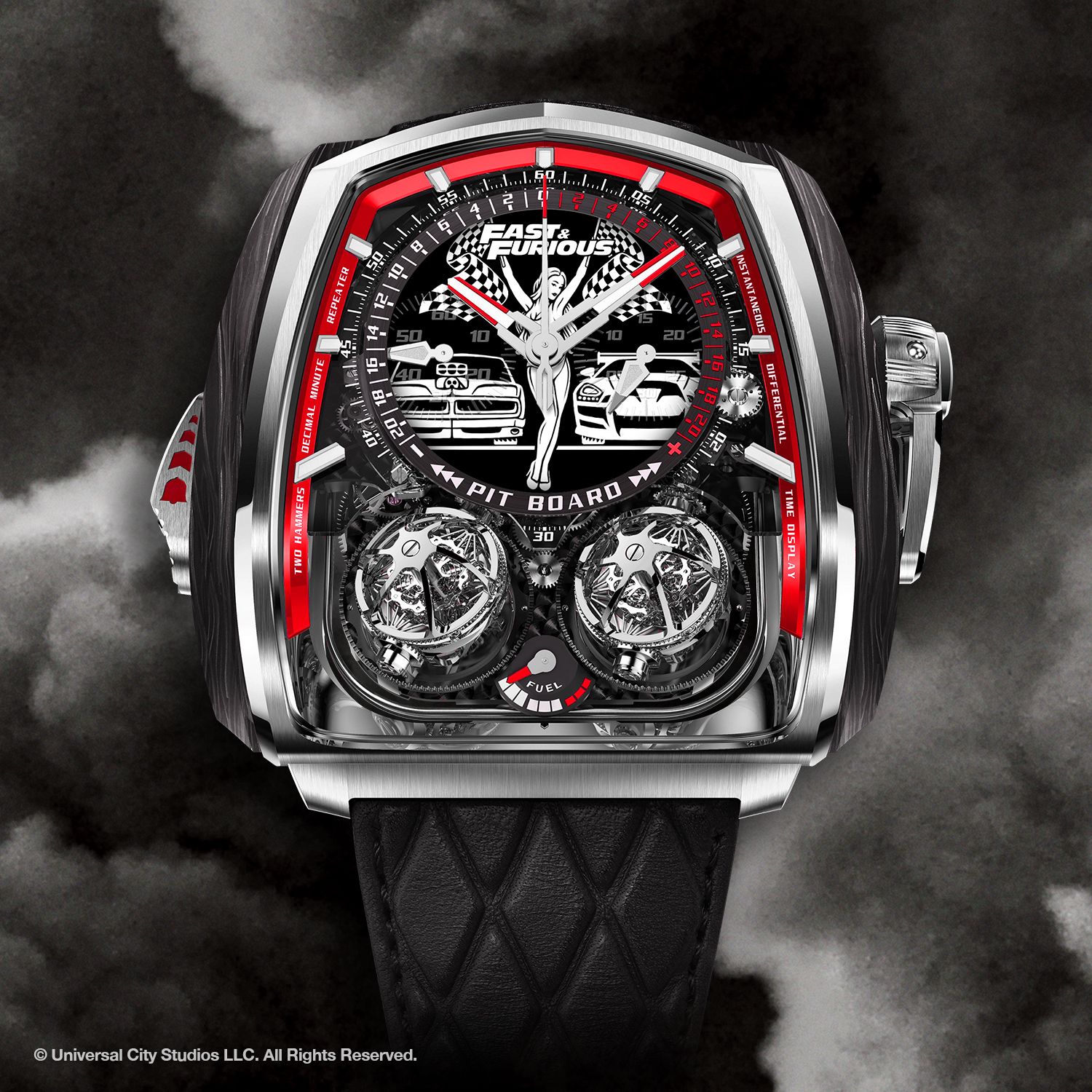 Jacob & Co. Fast & Furious Twin Turbo watch is made in cooperation with Universal Pictures and honors the film franchise.

Swiss watch brand Jacob & Co., whose motto is “inspired by the impossible” has teamed with Universal Pictures’ Fast & Furious movie saga to create a limited-edition Fast & Furious Twin Turbo watch. The Fast & Furious film franchise consists of eight movies so far, with a ninth spin-off F9 planned to hit theaters at the end of the month. The films have captured  a cult-like following and have earned just about $6 billion at worldwide box offices. Interestingly enough, Jacob & Co. has had its own version of speed in the form of the Twin Turbo Furious high-tech, high-mech watch for several years.Now, though, the brand releases the new $580,000 Fast & Furious  version. Is that too much to pay for a watch that honors one of the longest-running film franchises?

The new Fast & Furious Twin Turbo watch, based on the brand’s existing Twin Turbo Furious,  is crafted in an 88-part forged carbon case with steel bezel and accents. It boasts a large sapphire crystal dial in the upper portion of the watch that features imagery from the first 2001 Fast & Furious movie. The images is of a “starting” girl with the checkered flags ready to go. Behind her, the etched scene depicts a couple of hot rods ready to race the dramatic quarter mile. Naturally the Fast & Furious logo resides above the image.

The artistic racing images belie the complexity of the engine of this watch. The Jacob & Co. caliber JCFM05 manually wound movement consists of a massive 832 components. On the lower portion of the dial, speed and motion also come into play thanks to two three-dimensional triple-axis tourbillons that continually rotate at speeds of 24, 48 and 180-seconds respectively for each axis. The tourbillon escapements compensate for errors in timekeeping due to the effects of gravity when the watch is in certain positions on the wrist. By having multi-axis tourbillons, multiple positions on the wrist are compensated for – making the watch highly precise. At the base of the watch between the escapements is a fuel-gauge indicator that is actually the power reserve display for the watch.

The Fast & Furious Twin Turbo watch also boasts another complication: a decimal minute repeater. While it has nothing to do with racing, the decimal repeater chimes, on demand, the hours, the 10-minute intervals past the hour, and the minutes past the last 10-minute interval. Highly melodic, it offers a respite from the roaring engines of the race cars.

The auto-inspired watch is also equipped with a column-wheel monopusher chronograph for timing events (that quarter-mile race). The entire color-code of the watch is black with red accents – underscoring the racing theme. There is even a “pit board” reference indicator that recalls the hand-held pit-boards of yesteryear. The sapphire case back allows for viewing of the movement and boasts the  Fast & Furious Twin Turbo name.

In honor of the newest F9 movie slated to make its debut, the watch is being made in a limited edition of just nine pieces. So would you pay $580,000 for it? I know an entire cult-like audience for the film franchise and when it comes to cars, and watches, and Fast & Furious, there just don’t seem to be monetary bounds.

(This article by Roberta Naas first appeared in her column on Forbes.com)