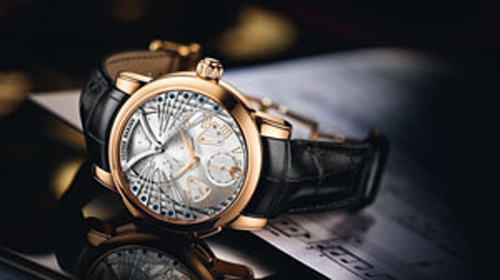 A true lover of the 1966 song “Strangers in the Night” – this watch is one I love. Of course, Ulysse Nardin could not turn out anything but a masterpiece, but this one hits home for me.  It is a musical watch for the wrist – not a repeater. In fact, the watch emulates a classic music box and plays Strangers in the Night either on demand (with the push of button) or on the hour. The action of the music box mechanism can be viewed through the sapphire crystal.  The masterpiece was five years in the development stages, and is a harmonic blend of time, music, aesthetics and function. In this mechanical self-winding music watch, Ulysse Nardin takes repeaters to an all new level – incorporating silicium technology for the escapement and anchor. The UN 690 movement enables the wearer to set the time via a pusher instead of the traditional crown setting. The watch bears the signature of musician Dieter Meier, who partnered with the brand for this creation.  Just 99 pieces will be made. And if I had the requisite $112,000, this would be my watch of choice.