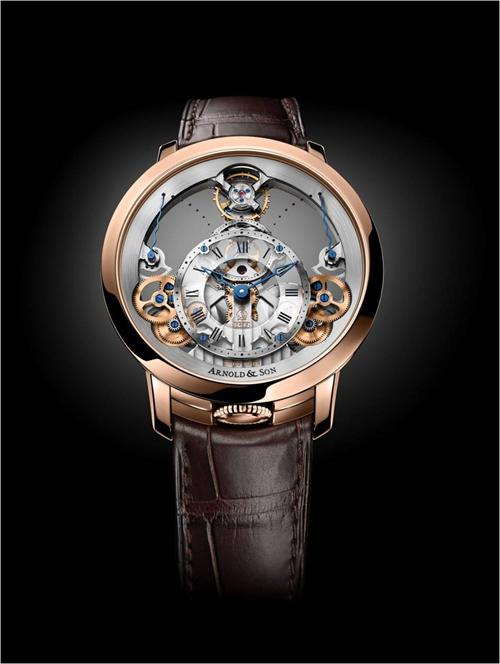 Part of the brand’s Instrument Collection, the watch was inspired  by the regulator clocks and watches that John and Roger Arnold created more than 200 years ago, and by antique British skeleton clocks. The exclusive mechanical caliber A&S 1615 was developed complete in house, and features the balance wheel at 12:00, situated directly beneath the palette and the anchor wheel (which is shaped in typical Arnold & Son’s majestic “X” form).  At the opposite end of the movement, at 6:00, lay two mainspring barrels that supply the hand-wound caliber with an amazing 80 hours of power reserve, and provide a more constant force to the wheel train.

The gear train runs vertically in a linear format connecting the two barrels at 6:00 to the balance wheel at 12:00, and endowing the movement with its pyramid structure. The bridges are designed so that all of the wheels, the two mainspring barrels, the escapement 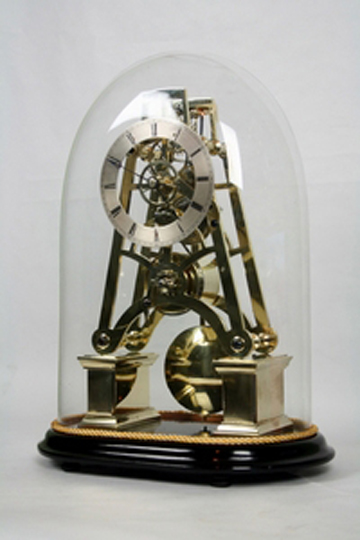 and balance wheel are all visible from the dial side. Additionally, the movement is fitted with two power reserve indicators – one each on either side of the linear gear train – to display the energy level for each barrel separately. The power reserve hands indicate the reserve level via graduated dots (that are printed under the top sapphire crystal) in an arc format, and demonstrate how one barrel transfers energy to the second one when needed. Essentially, as the first barrel winds the second one, the power reserve indicator of the first barrel goes down, while the second one goes up – making for an accurate and intriguing readout.

This Time Pyramid offers a detailed 3D visual appeal with movement parts and indications built on three levels (subsidiary seconds dial on the bottom, hour indications on sapphire crystal dial in the middle, silver top ring for the minutes). While the movement is extremely thin – at just 4.4mm – the multiple levels bring depth and detail. The crown is artfully positioned at six o’clock. Crafted in 18-karat rose gold , the 44.6mm  watch retails for approximately $42,000.