Introducing the Montblanc Metamorphosis II, A Theatrical Performance on the Wrist — To Be Officially Unveiled at Watches & Wonders Exhibition 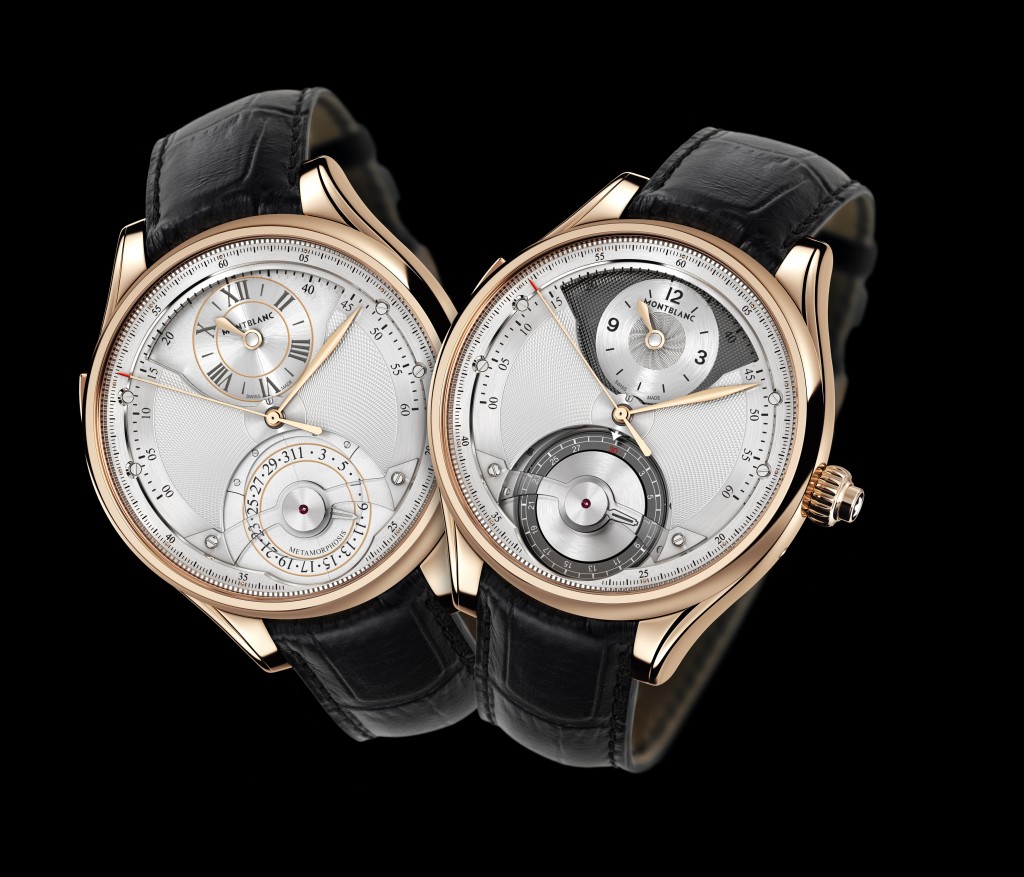 The Montblanc Metamorphosis II is true to its name, transforming dials and functions with the push of a slide.

Starting Monday in Hong Kong the worlds’ second annual Watches & Wonders Exhibition is taking place with top Swiss brands unveiling – well – top watches and extreme wonders that will have aficionados chomping at the bit. One such timepiece is the all-new Montblanc Metamorphosis II.

The complex watch houses one of the most complicated movements ever developed and designed in Montblanc’s Villeret workshops. The mechanical movement not only consists of a whopping 746 components – each finely finished by hand – but also is protected by several patents. Four years in the research and development, the new watch recalls the original Metamorphosis I that was unveiled to the world in 2010 and first demonstrated the concept of overlaid dials majestically parting like a curtain on a window. 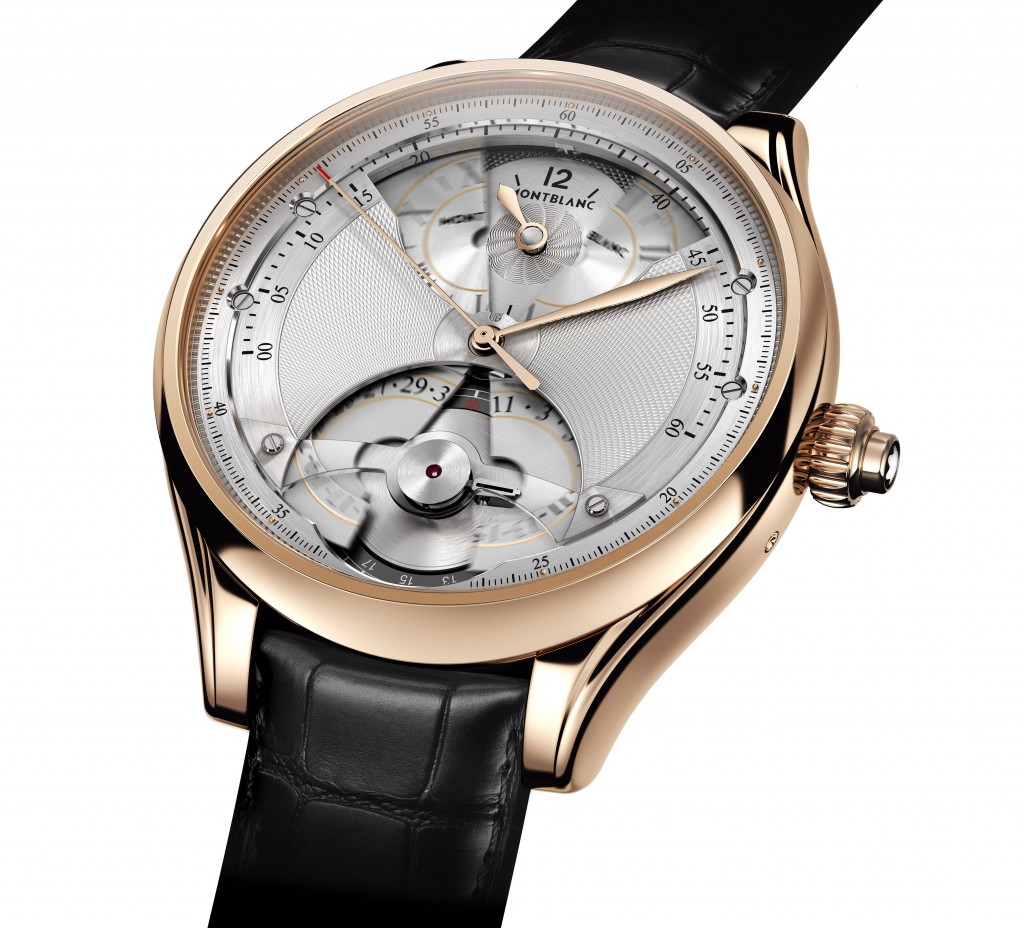 A definitive “wonder,” the Metamorphosis II is true to its name. It transforms in front of your eyes – going from one watch to a totally separate and different watch in the blink of an eye.   Intriguingly, not only does the watch aesthetic change as the top dial moves aside for the bottom dial to be displayed, but also the functions of the watch change.

Essentially, two apertures unseen to the eye – and able to part in the middle and move aside like a curtain — grace the watch. One sits at 12:00 and the other at 6:00. The timepiece, in its closed state, offers a stunning classical dial with hours, minutes and date indication. With the push of a control slide on the left side of the case, the complex mechanical system kicks into play – parting the large apertures and   transforming the dial into a chronograph with its counting functions. While to the eye it looks as though the apertures are opening, they are in fact partitions that fold in on themselves inside the dial – disappearing to the side. 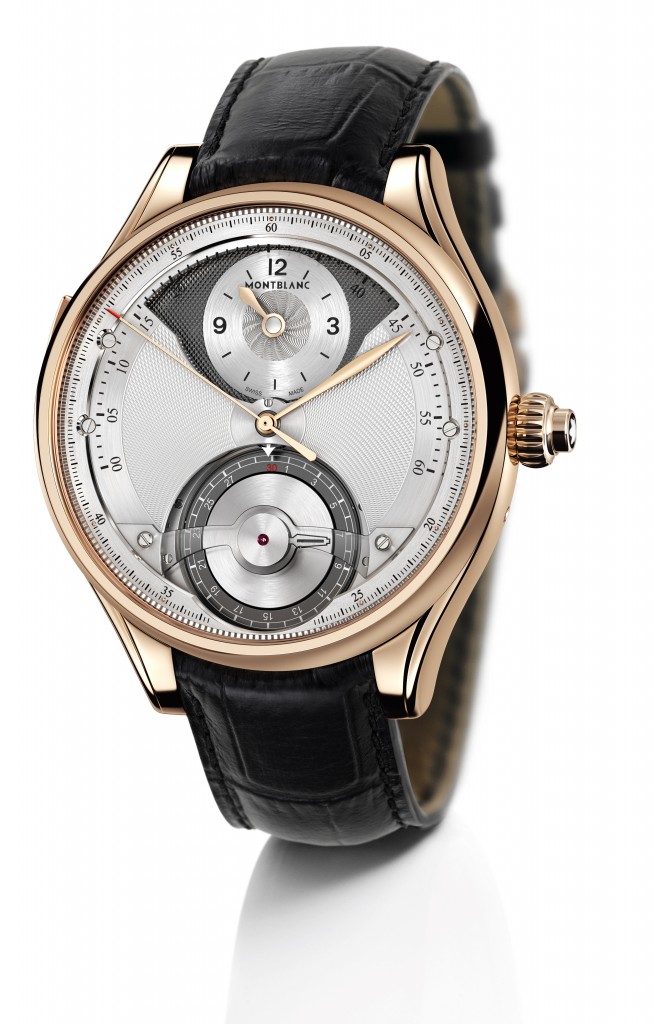 The chronograph dial with minutes counter and time indication rises via a ramp system.

But- the magic isn’t done yet. Not only is a new dial portion revealed by the metamorphosis, but also the lower dial gradually rises via a lifting ramp inside the movement. On the lower portion of the dial, the top date of the classical watch disappears and the chronograph minute counter takes its place. In the upper part of the dial, the classic Roman numeral dime display transforms into an Arabic numeral display with index to ensure readability of the chronograph. The retrograde minute hand retains the same function in both dial versions, butt he central seconds hand of the chronograph dial changes its function to serve as the chronograph second hand. Pressing the pusher that is integrated into the crown activates the chronograph minutes counter.  With another push of the control device, the transformation is reversed. Voila! An entire Broadway production has been beautifully orchestrated on the wrist – in just about five seconds per transformation. 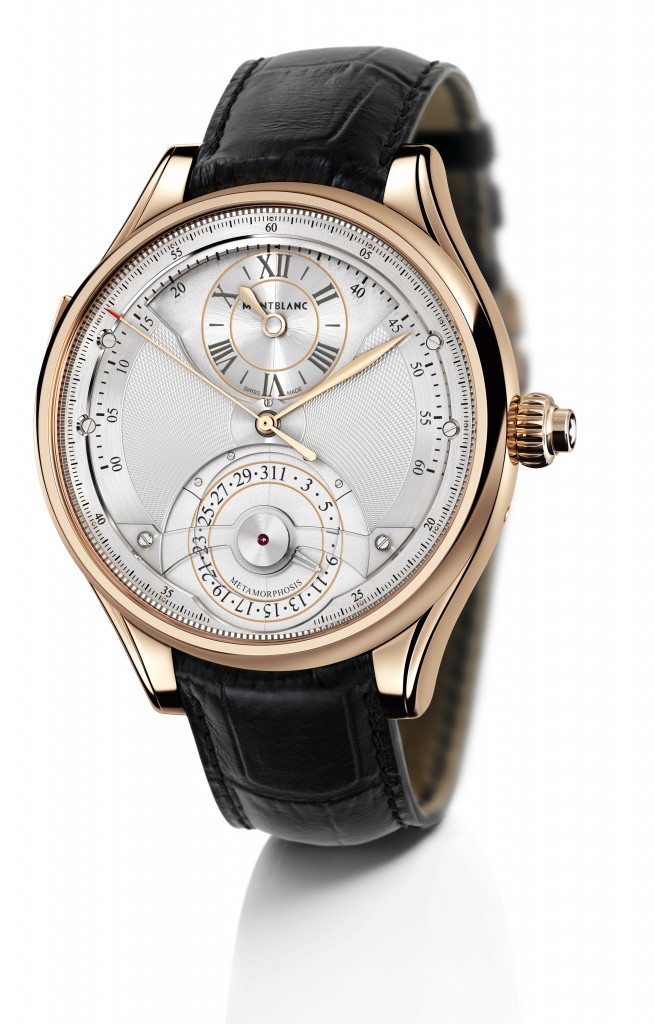 The classical dial offers time and date with different finishings than the chronograph dial.

In fact, the Metamorphosis was originally inspired by the opening of a theater curtain that parts to reveal a stage. And, like any theatrical production, the play is a perfect blend of art, technical prowess emotion. Here, the Metamorphosis is a unique combination of form and function, of aesthetics and mechanics. A dance of 82 mechanical components perfectly choreographed and driven by a separate barrel, comprise the metamorphosis. By combining several rich arts — including chronograph advances and automaton manufacture — found in its more than 156-year heritage at Villeret, Montblanc is able to offer the perfect blend of innovation and tradition – not to mention complicated craftsmanship.

The nearly 800-part hand-made hand-wound mechanical movement (MB M67.40) essentially consists of a monopusher column wheel chronograph mechanism with horizontal clutch and large balance wheel with Phillips terminal curve hairspring. The main plate and bridges are made of rhodium-plated nickel silver. It beats at 18,000 vibrations per hour and offers 50 hours of power reserve. It should be noted that of the total 746 components, 494 are dedicated to the metamorphosis function. 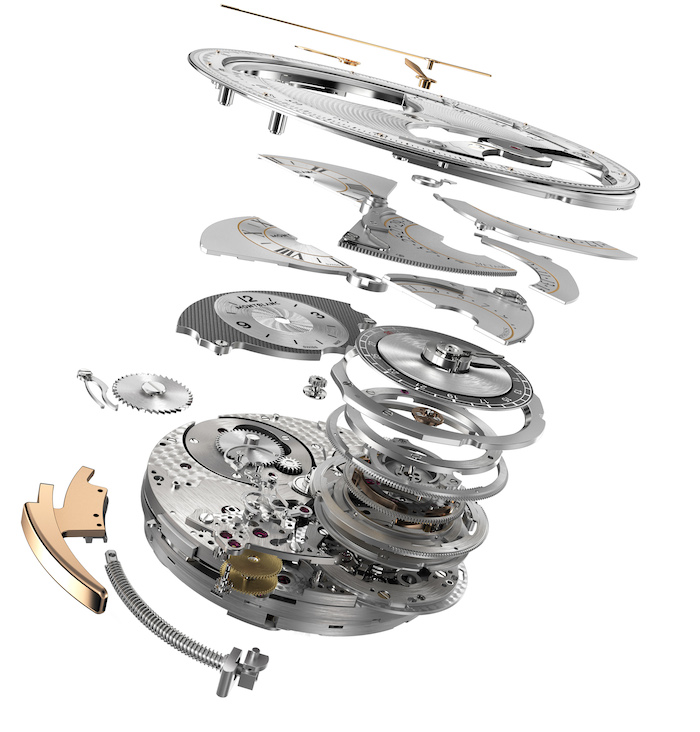 The movement of the Metamorphosis II consists of 746 components.

With such grand mechanics in the movement and the dials, one could easily forget the beauty and finish of the 52mm watch but for the fact that it is a glorious work of art in and of itself. Not only are all of the components hand finished, but also the 18-karat 5N rose gold case is highly polished, and the 18-karat solid gold dial features a variety of meticulous decorations and finishings depending on the dial. The inside portion of each side of the Classical dial features a handcrafted silvered barleycorn “Grain d’orge” guilloche. The emerging chronograph dial is equally as meticulously finished. The Arabic numeral dial features a handcrafted black “Clous de Paris” guilloche decoration for the time indication, with a contrasting silvered spiral guilloché center. The decorative work requires dozens of hours of master artisan time. The watch naturally features a sapphire crystal caseback for viewing the movement. 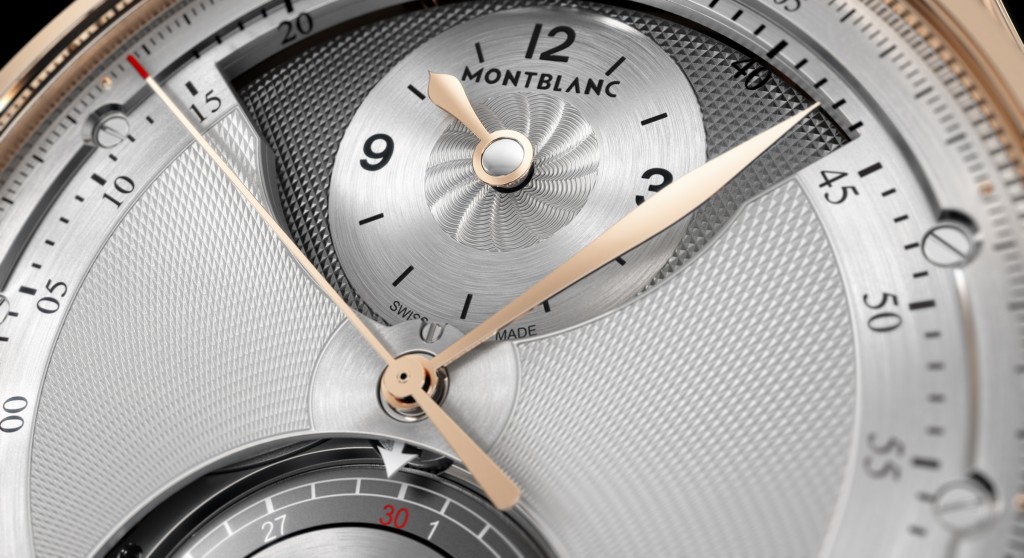 This extraordinary watch – with patents and unparalleled performance – is par to f the Collection Montblanc Villeret 1858, and is being produced in a very limited edition of 18 pieces.

The Metamorphosis II is the result of incredible work on the part of many of the finest artisans the Swiss watch industry has to offer. We here at ATimelyPerspective are thrilled to see the new rendition of this watch and wish we could be one of the lucky 18 destined to own one. 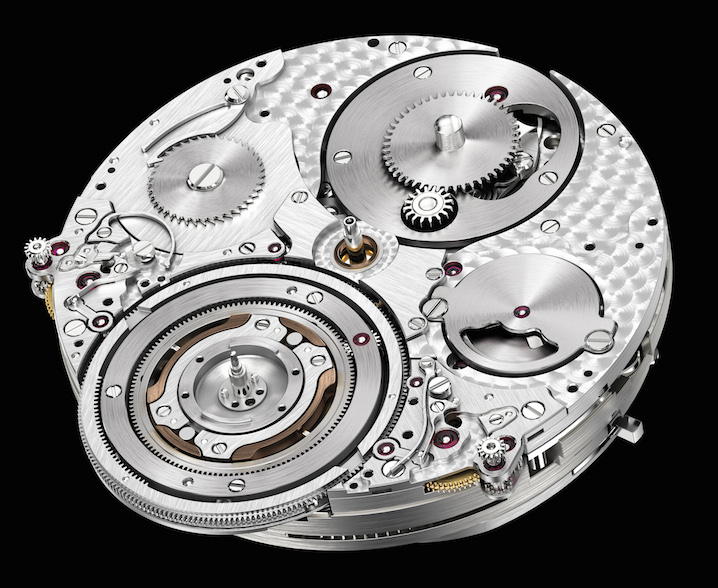 The Metamorphosis II retains all of its functions at all times, irrespective of the chosen dial. In this manner, the watch is continually precise in all its functions.

We’ve said it here before, but will reiterate. With Jerome Lambert heading up the brand for the past year and a half, we knew we were destined to see great things from the company – after all Lambert is a visionary who not only thinks out side the proverbial box, but also takes action.

He has clearly perpetuated a message at Montblanc that conveys the brand’s strong Manufacture philosophy – offering master craftsmanship, innovation and excitement. He has done this by raising the profile of both the brand’s Manufacture in Villeret (which has more than 150 years of exceptional watchmaking and movement making expertise) and its Le Locle facility (with its 500 hours testing and more).

Now, we see the first steps of his work in the newest timepieces coming from the brand, and the Montblanc Metamorphosis II is a superb example. Montblanc is also unveiling several other new editions at Watches & Wonders, but that is another story coming soon. Stay tuned.

Introducing The Vacheron Constantin Year Of The Rabbit Watch
September 27, 2014

Introducing the Piaget Year Of The Rabbit Watch
September 27, 2014