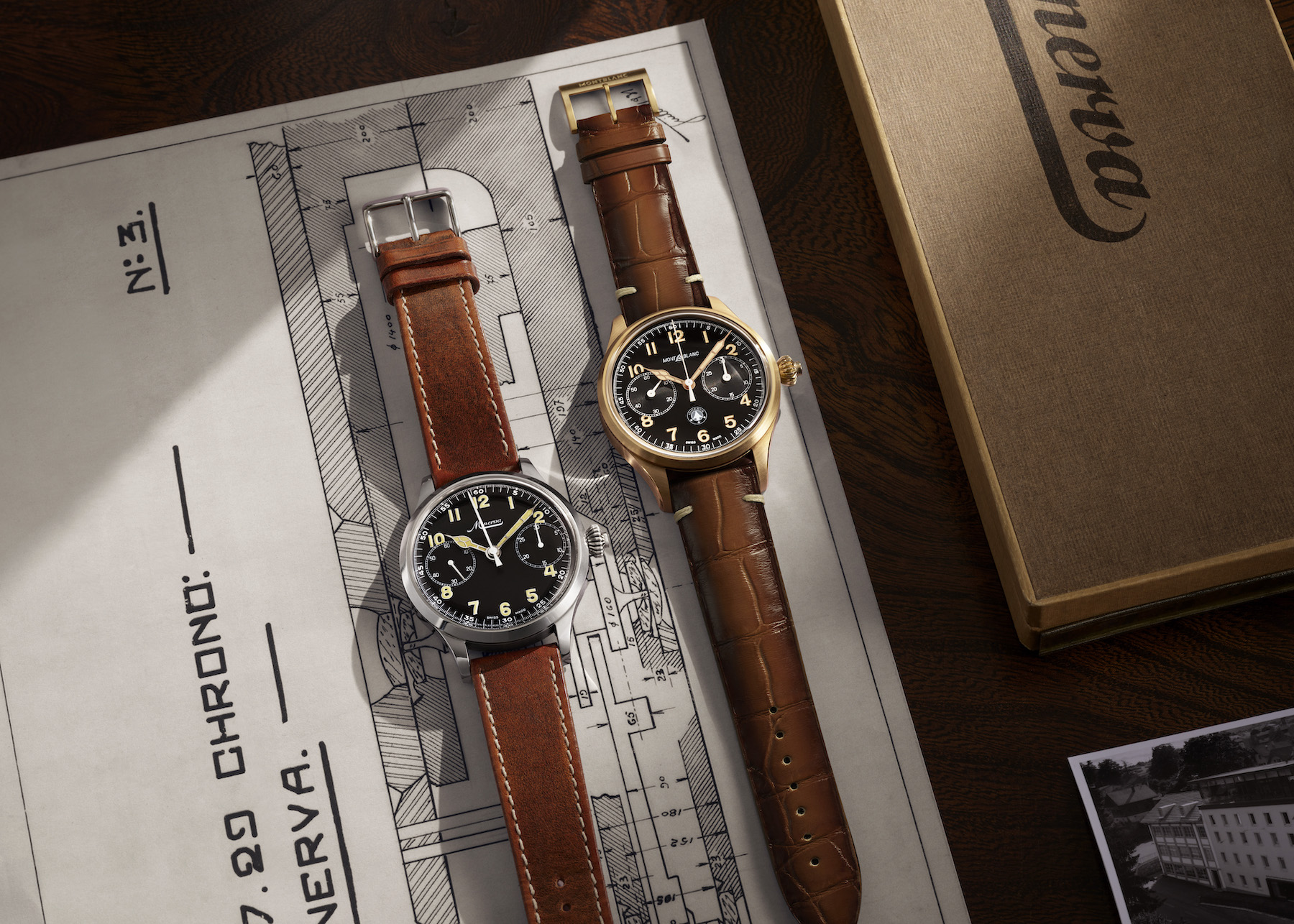 The new Montblanc 1858 Monopusher Chronograph Origins watch in bronze alongside the original from the 1930’s.

With the second digital edition of Watches & Wonders Geneva on the horizon (beginning April 7, 2021), Montblanc is starting to raise the curtain, unveiling a few new timepieces this month. The Montblanc 1858 Monopusher Chronograph Origins Limited Edition 100 watch is the first of several impressive pieces in the lineup. This particular watch recalls a 1930’s Minerva military chronograph that is now expressed in a modern take.

Montblanc, founded in 1858, has two manufactures in Switzerland. The main workshop is in Le Locle in the Swiss Jura mountains, while the other workshop is in the quaint village of Villeret. That workshop was originally the Minerva watch brand (where timepieces, especially chronographs,  were hand-made and finished) and was acquired by Montblanc a couple of decades ago.  Today, Montblanc has worked to successfully link the rich heritage and craftsmanship of the Minerva workshop with the Montblanc craftsmanship, style and standards. 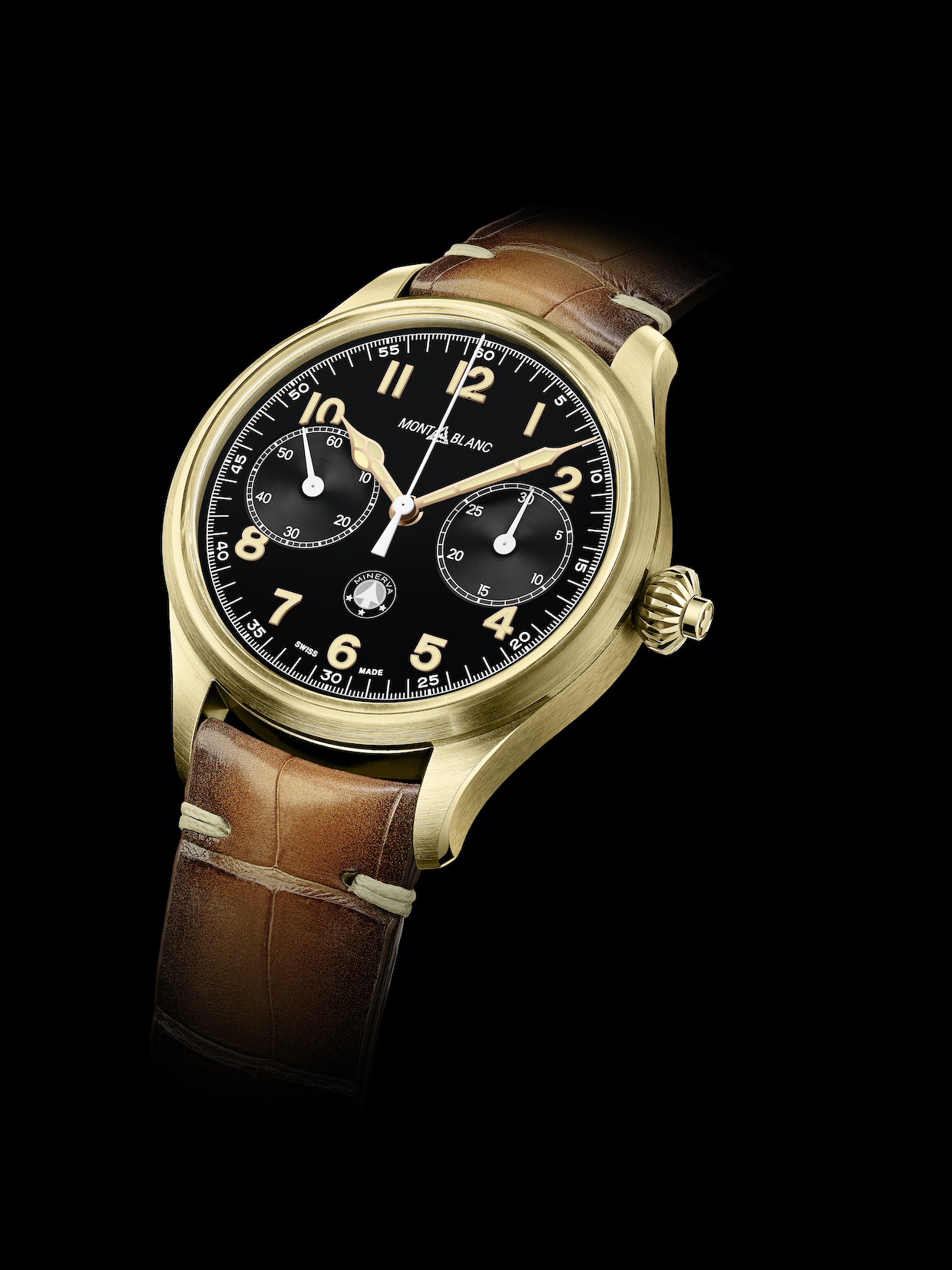 Montblanc 1858 Monopusher Chronograph Origins watch is crafted in bronze so that it can achieve its own patina over time.

As such, Montblanc often calls on the Minerva archives for some of its specialized chronographs and the newest rendition is no exception. It is based on a 46mm monopusher chronograph from the 1930’s with all the hallmarks of a Minerva with certain twists. Naturally, the new timepiece – created in a limited edition of just 100 pieces, houses a modern day movement. It is powered by the Caliber MB M16.29 manually wound movement with monopusher and column-wheel chronograph. The authentic reconstruction of the Minerva caliber from the early 20th century is exquisite and offers meticulously finished German silver mainplate and bridges. In total, the movement consists of 252 components and offers 50 hours of power reserve.

The watch is crafted in a special bronze alloy that is a nod back to the military style watches of yesteryear. Each watch will form its own unique patina over time – making each distinctive and unique. The watch also boasts an “officer” style case back  — with a half hunter case that opens to reveal an engraving opposite the exquisite movement visible via a sapphire crystal. The inscription inside the officer caseback notes that the watch is a “Re-edition of a Minerva military chronograph from the 1930’s equipped with a hand-made calibre following the Swiss watchmaking tradition.”  The officer back also bears a three-dimensional rendering of the Minerva Goddess logo that is created using a laser engraving. 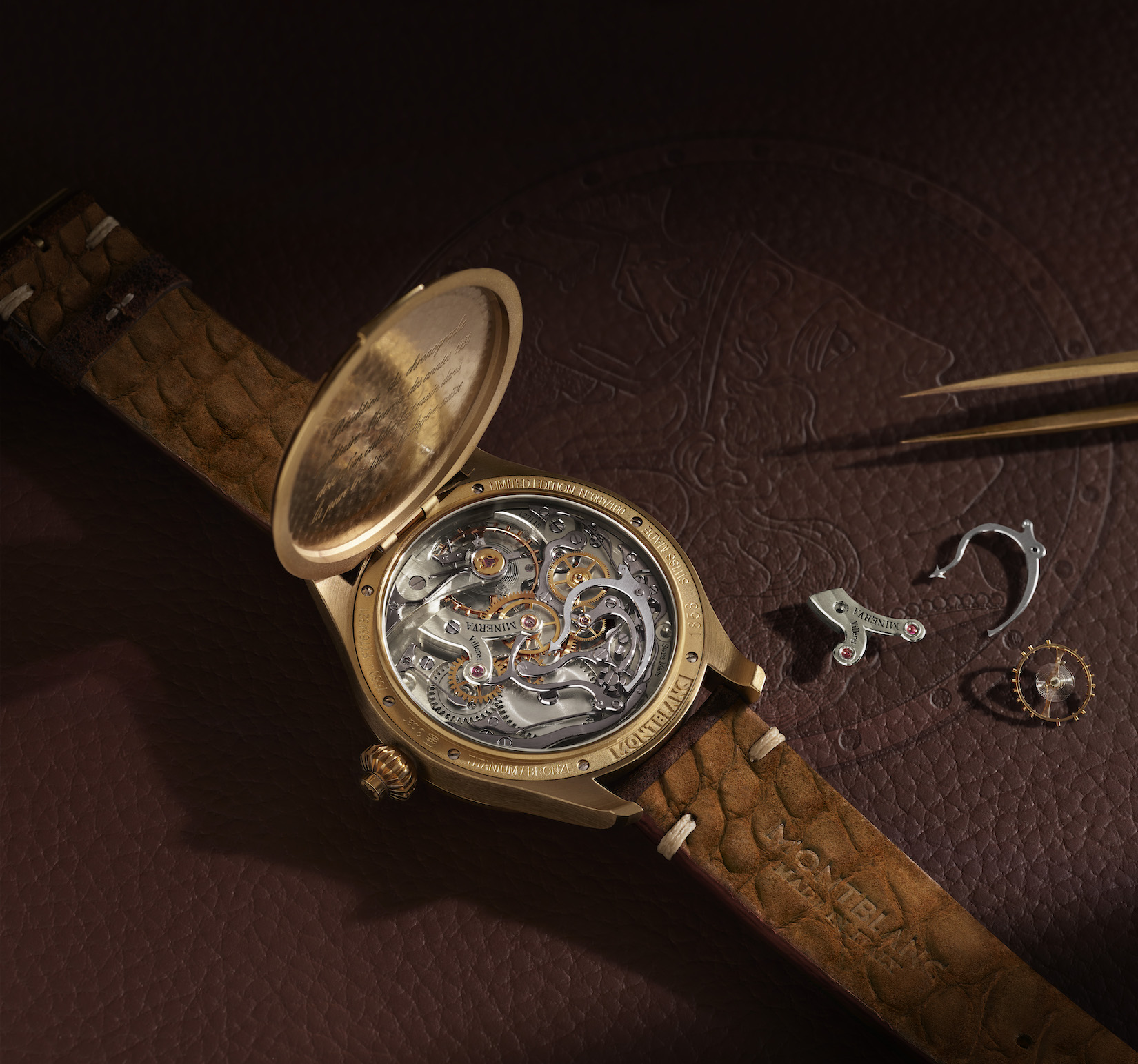 The Montblanc 1858 Monopusher Chronograph Origins watch features a half hunter case back.

The black dial of the watch is accented with rose-gold colored cathedral hands and Arabic  numerals that glow beige in the dark thanks to a Super-LumiNova coating. The watch boasts a semi-secret Minerva logo on the dial along with the  Montblanc logo at 6:00. The bi-compax chronograph counters and railway minute track are all reproductions of the original piece. The watch is finished with a brown Sfumato alligator strap. The watch retails for $32,500.

According to Nicolas Baretzki, CEO of Montblanc, the watch perfectly fits into the brand’s watchmaking vision. “Our goal is to preserve the history of Minerva in everything we do, to highlight its tradition, but to also keep true to the craftsmanship and style that is Montblanc.” 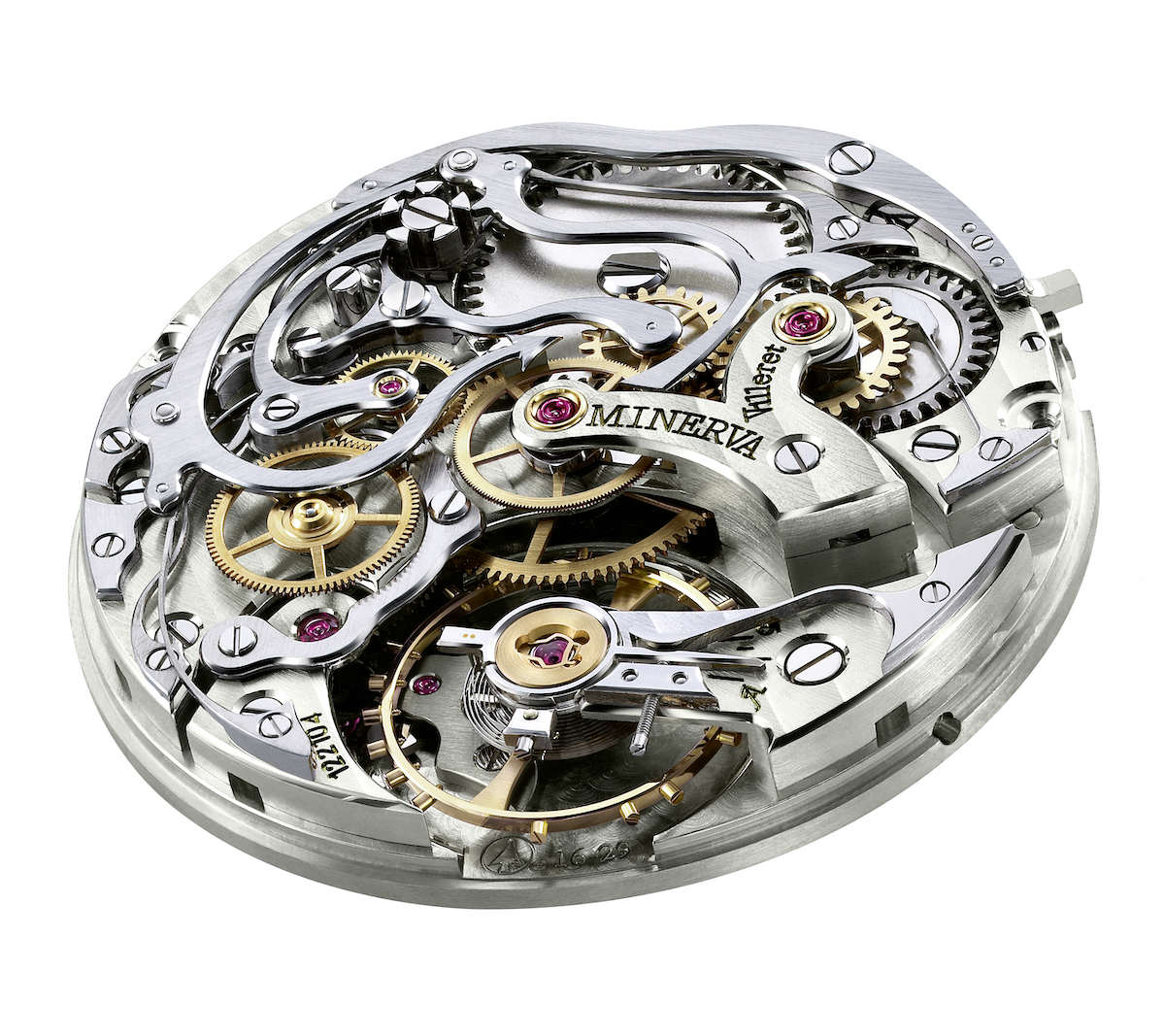 (This article by Roberta Naas  was first published on her column on Forbes.com.)