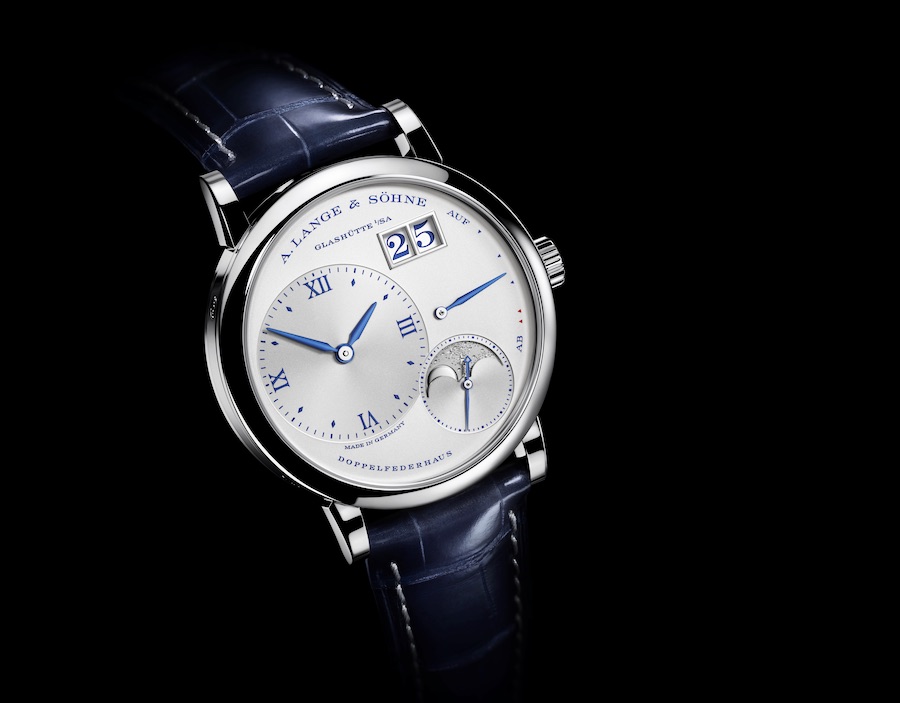 Earlier this year at the Salon International de la Haute Horlogerie (SIHH) show in Geneva,  A. Lange & Sohne unveiled its first watch in a series of new timepieces to be revealed this year. The new watches have certain commonalities in design and all were born to celebrate the 25th Anniversary  of the rebirth of the A. Lange  & Sohne brand in 1994. Now the brand unveils one of the most beautiful pieces to date: the Little Lange 1 Moon Phase 25th Anniversary watch. (You can scroll down to find out my impressions of the watch, or continue reading for all the details.)

Although A. Lange  & Sohne’s original rotes date back to 1845, when Dresden-based watchmaker Ferdinand Adolph Lange opened his workshops in the Saxony region, the 25th anniversary celebrates the brand’s re-establishment in Germany.  The original  A. Lange & Sohne brand had been expropriated after World War II, and virtually disappeared. 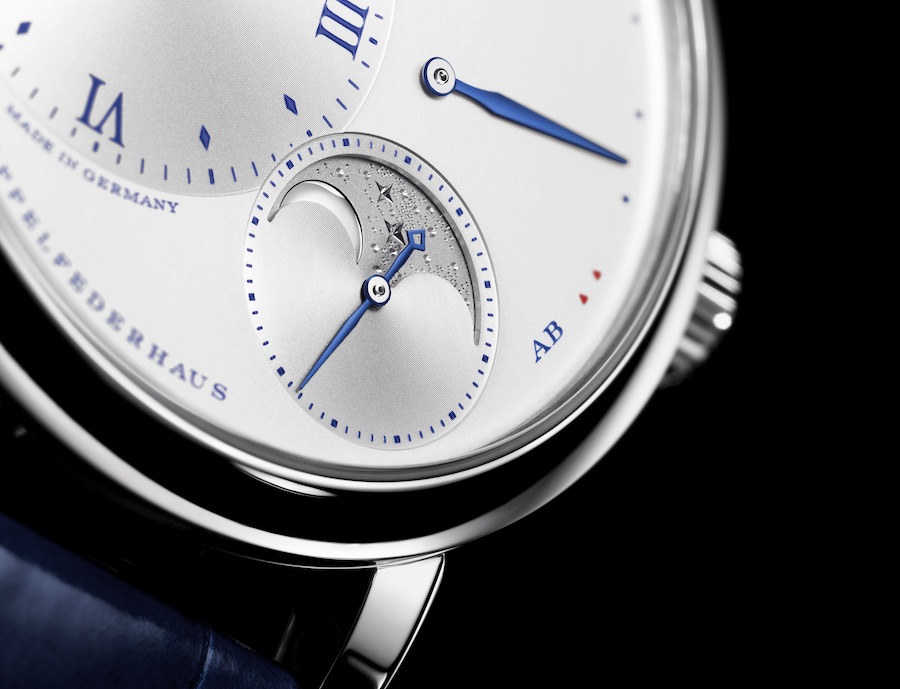 As its name suggests, the A. Lange & Sohne Little Lange 1 Moon Phase Anniversary watch has an engraved moonphase indicator that is accurate for 122.6 years before needing a one-day adjustment.

With the reunification of Germany, Lange’s great-grandson, the late Walter Lange, worked tirelessly to bring the brand back to reality. He establish the new Manufacture back in Saxony and  unveiled watches that beautifully recalled those  of the past.  Since then, the brand has created  more than 60 manufacture-made calibers, and continues to evolve.

This year, for each of the 10 anniversary special editions being made (of which this one is the ninth), A. Lange is turning to those existing calibers. This newest anniversary Little Lange 1 Moon Phase is powered by the in-house-made caliber L121.2 with twin mainspring barrels so it only needs to be wound every three days. 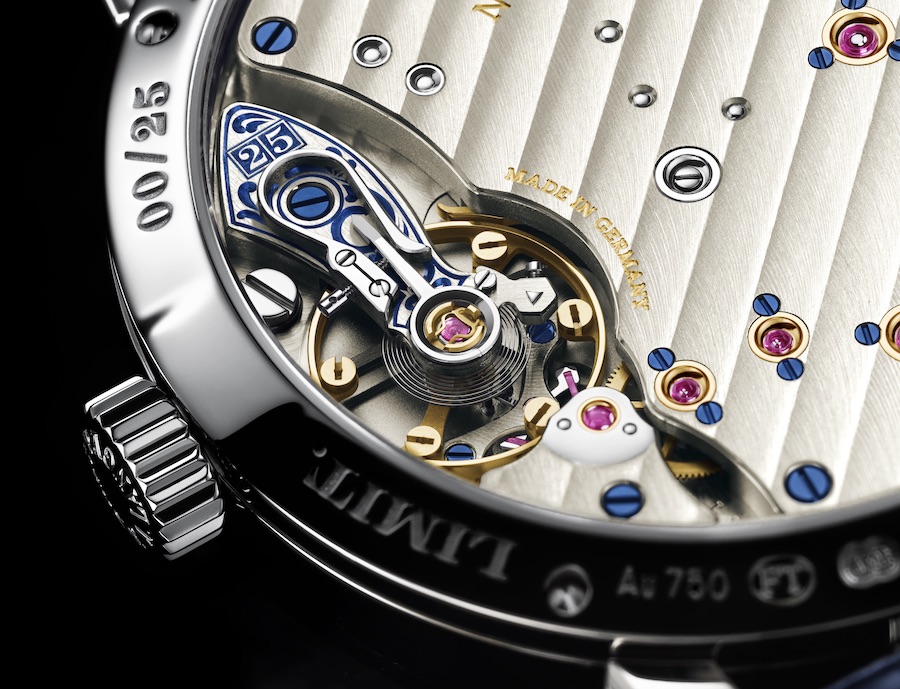 The A. Lange & Sohne Little Lange 1 Moon Phase 25th Anniversary Watch is powered by the brand’s caliber L121.2 movement with a massive 411 parts.

Like the other anniversary watches unveiled this year, the Little Lange 1 Moon Phase 25th Anniversary watch is crafted in 18-karat white gold, with a solid silver argente dial with blue printed accents, blued steel hands and blue alligator strap (the commonalities I mentioned that are inherent in each of the Anniversary watches).

The dial is a sophisticated work of elegance with a distinctive German layout that offers functionality and form first and foremost.  The off-center dial features an outside date at 2:00 using two apertures, an Up/Down power reserve indicator via a blued hand pointing to an arc for high and low power reserve. The hour and minute subsidiary dial at 9:00 takes up the left side of the dial. 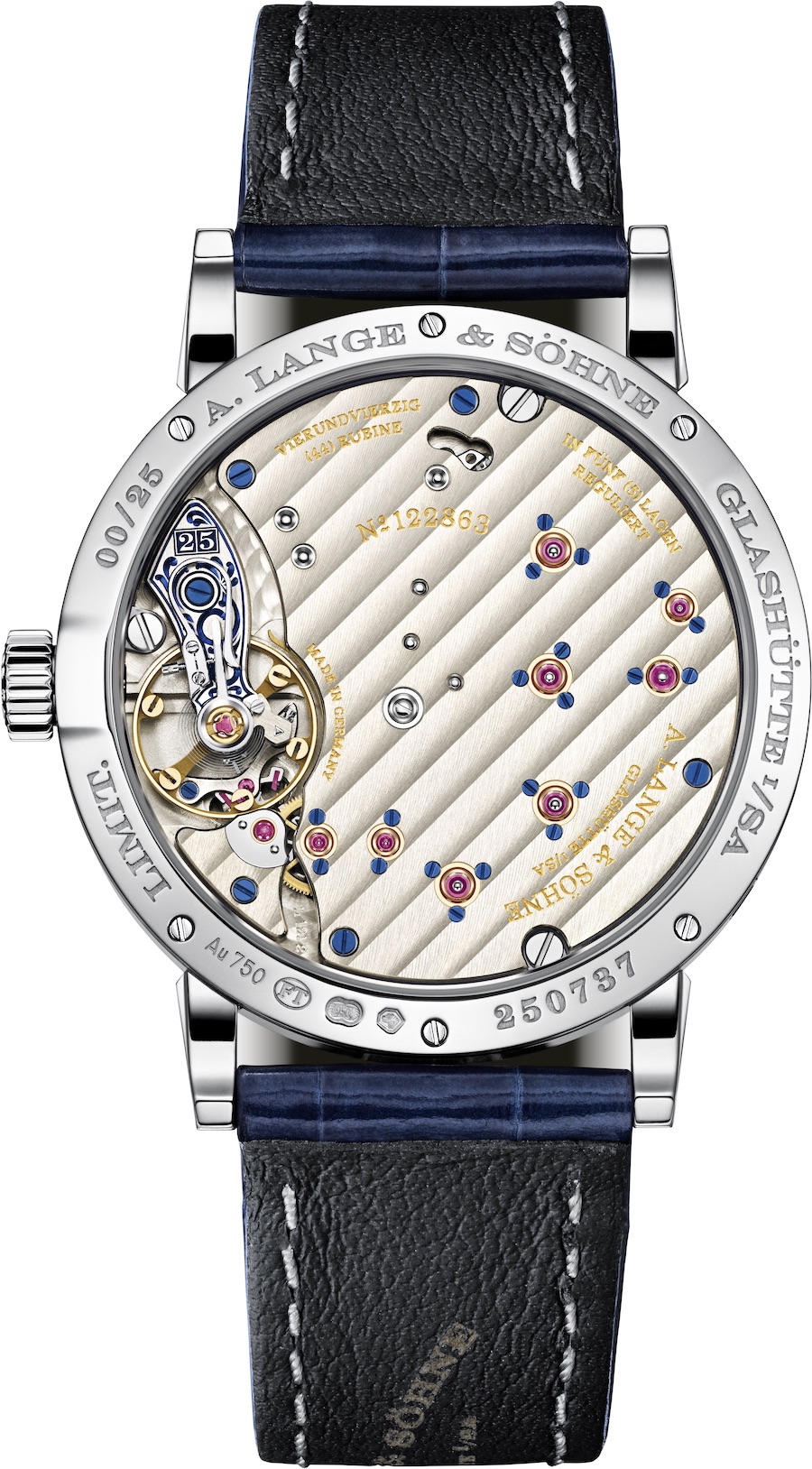 At 5:00, adjacent to the time-dial, resides an alluring hand-engraved moon phase indication. The white gold lunar disk offers a subtle but appealing touch thanks to the six engraved stars and numerous tiny dots that recall the starry night sky and golden moons.  The moonphase indication is incredibly precise, needing a one-day correction just once every 122.6 years.  Measuring 36.8mm in size, the watch can be worn by both men and women.

As mentioned, the 411-part Caliber L121.2 manual-wind movement powers the watch. This movement is a fan-favorite with lever escapement, shock-resistant screw balance  and precision beat adjustment system with later setscrew and whiplash spring. It offers 72 hours of power reserve when fully wound. Like all A. Lange & Sohne movements, it is crafted to exacting standards and beautifully decorated and assembled by hand. 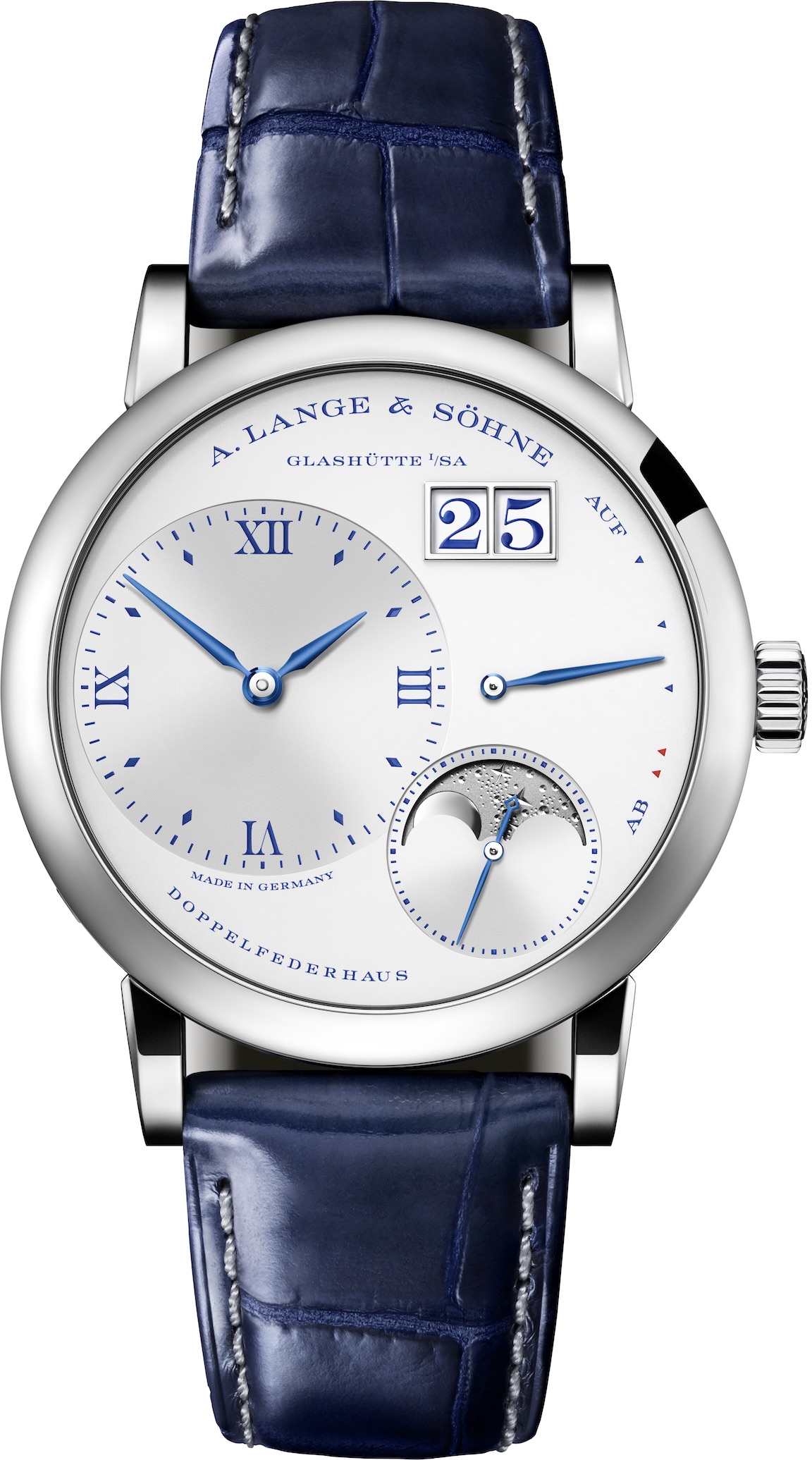 I have been loving the Anniversary pieces. My all-time favorite is the Lange 1 Tourbillon Perpetual Calendar Lange 1 Time Zone watch that was unveiled in May, as well as the first one released, the Lange 1 watch. This newest Little Lange 1 Moon Phase 25th Anniversary watch, though, calls to me. I have loved the Lange 1 Moonphase since it was introduced a couple of years ago, but this version — with the Argente solid silver dial and the hand-engraved moon in color-coordinated hues  — is at once both subtle and yet magically entrancing.

The blue on white color combination just stirs the soul.  The only drawback for me is the size because I am a fan of a larger watch and 36.8mm is a bit small on the wrist for me. Also, a larger size would have given more room for the moonphase complication.

I do love that A. Lange & Sohne has equipped the watch with a  transparent sapphire caseback that allows for viewing of the meticulously finished caliber. It also offers a nice surprise: a blue-filled engraved German silver balance cock with outside date engraved as 25 for the anniversary. While just 25 pieces will be made, I am sure they are going fast — especially given the price:  $43,500.