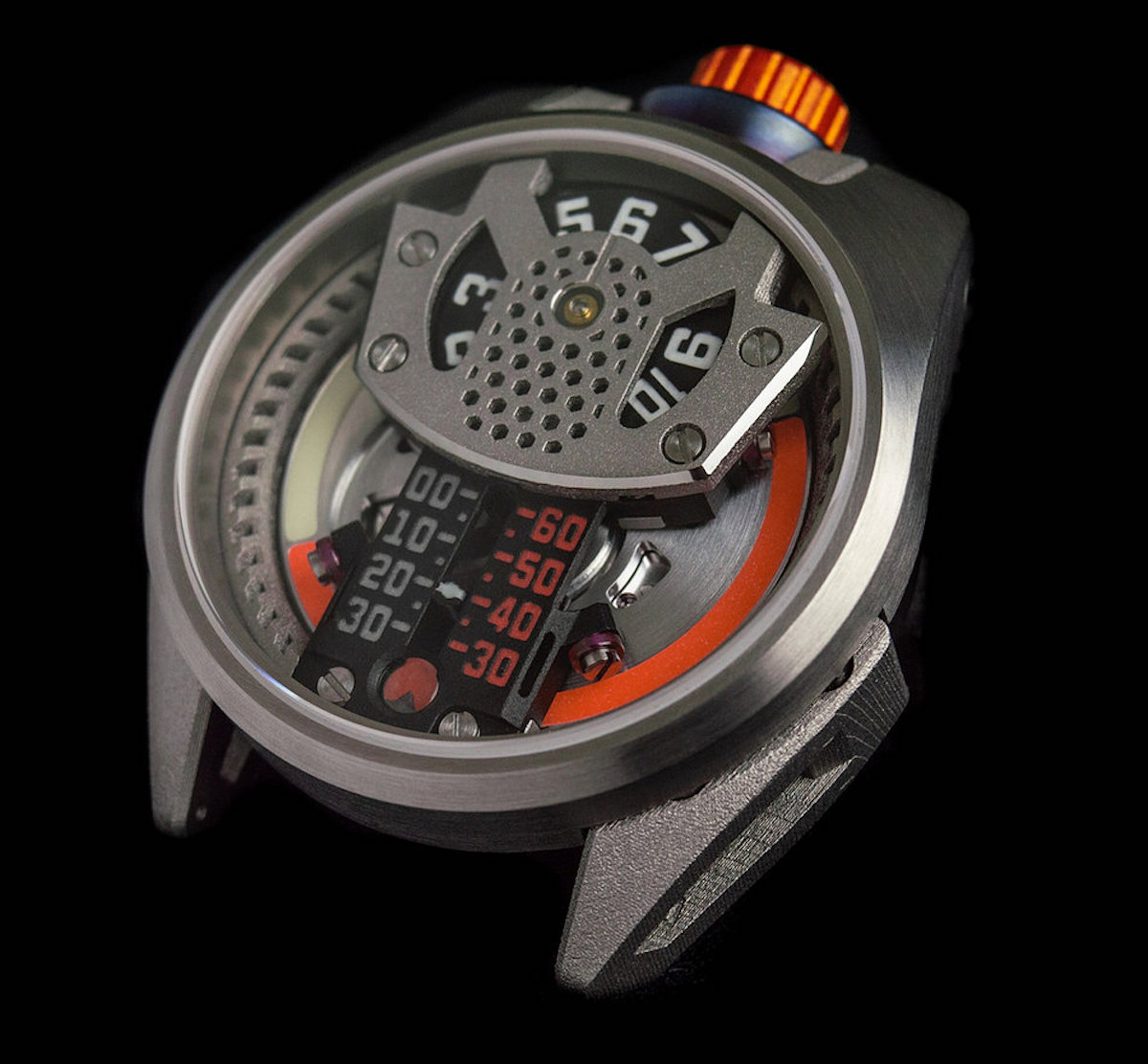 Space-age and highly technical looking, the 3D-printed Project One watch from Barrelhand is an interesting combination of watchmaking and technology.  One of just a few watch brands in the world to turn to 3D printing for its watches, Barrelhand’s Project One offers some top-notch time-display complications in a super cool package.

Founded in San Francisco by Karel Bachand, Barrelhand is currently making its second group of 10 watches. The first batch of 10 was made in San Francisco in late 2020. According to Bachand, who previously worked for NASA  Ames Research Center, and who made the Forbes 30 under 30 list this year, his watches are all about pushing the limits of today’s technology. 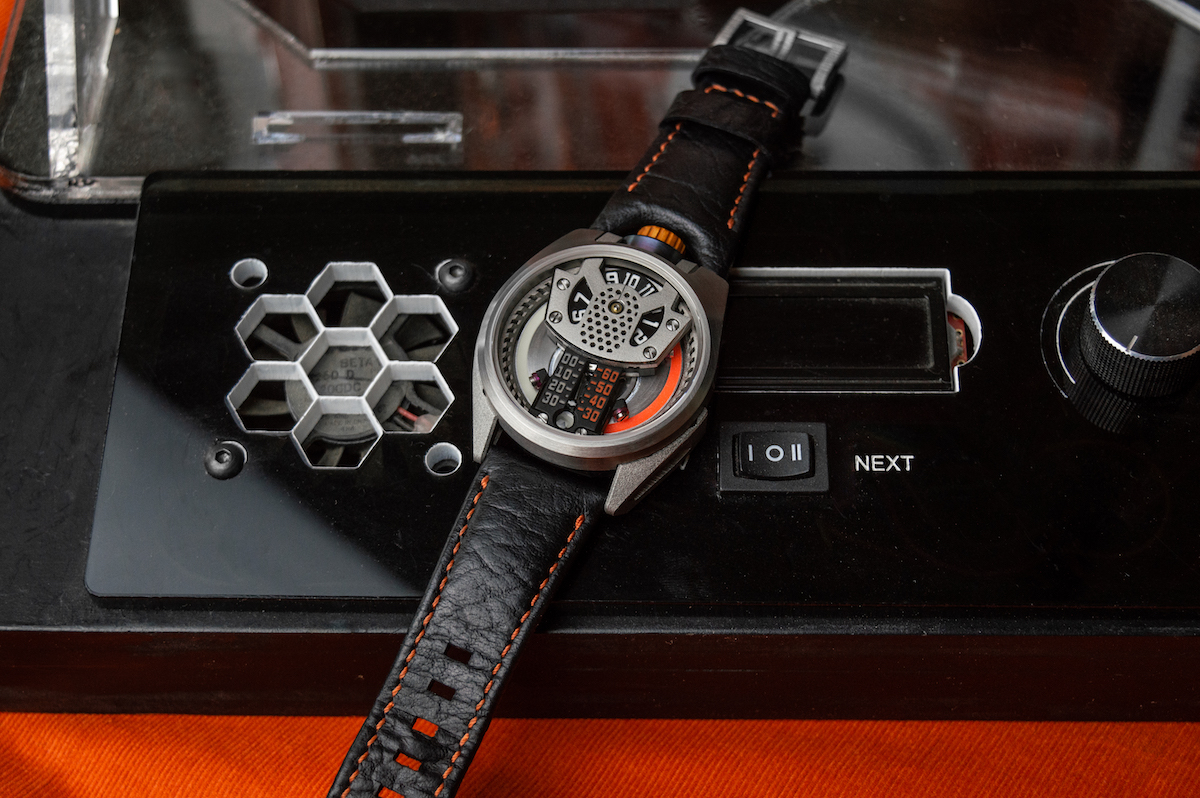 The $30,000 Project One watches are made of steel and titanium and boast almost a dozen parts that are 3D printed at a resolution of exceptionally tiny microns (equating to parts that are four times thinner than a human hair). Among the 3D printed components are parts of the outer case and the movement, including the top plate that holds the hour disk.  Some parts, such as one of the bridges, require 25-micron tolerances to work, and with 3D printing, Barrelhand can achieve these precise  measurements.

“We can get incredible tolerances and functions when it comes to precision,” says Bachand, who notes that t when he was 18 and in college studying engineering, he was in love with the Urwerk UR-202. “I couldn’t afford it so I learned how to make it using 3D printing.” Bachand says that in 2014, Urwerk flew him to Switzerland for the SIHH exhibition. “These watchmakers were my idols and it was wonderful to meet them.”  At that point in time, he was a sophomore in college, but he resolved to one day create his own spaceship-like sculpture  for the wrist.

Bachand worked on Project One for six years during and after graduating as a micro-mechanical engineer, and he created 36 prototypes.  “By turning to additive manufacturing processes like 3D printing, we can be truly relevant and very precise,” says Bachand. In fact, currently the three-dimensional printing used for Project One is done in Germany because in America, the precise resolution he wants  (0.01mm or 10 microns) is difficult to find. Barrelhand 3D printed parts are made using Metal Binder Jetting (MBJ).  By being at the forefront of this technology, Barrelhand can manufacture parts that are not possible with today’s machinery. Bachand is keen on finding a US source for this printing, though. 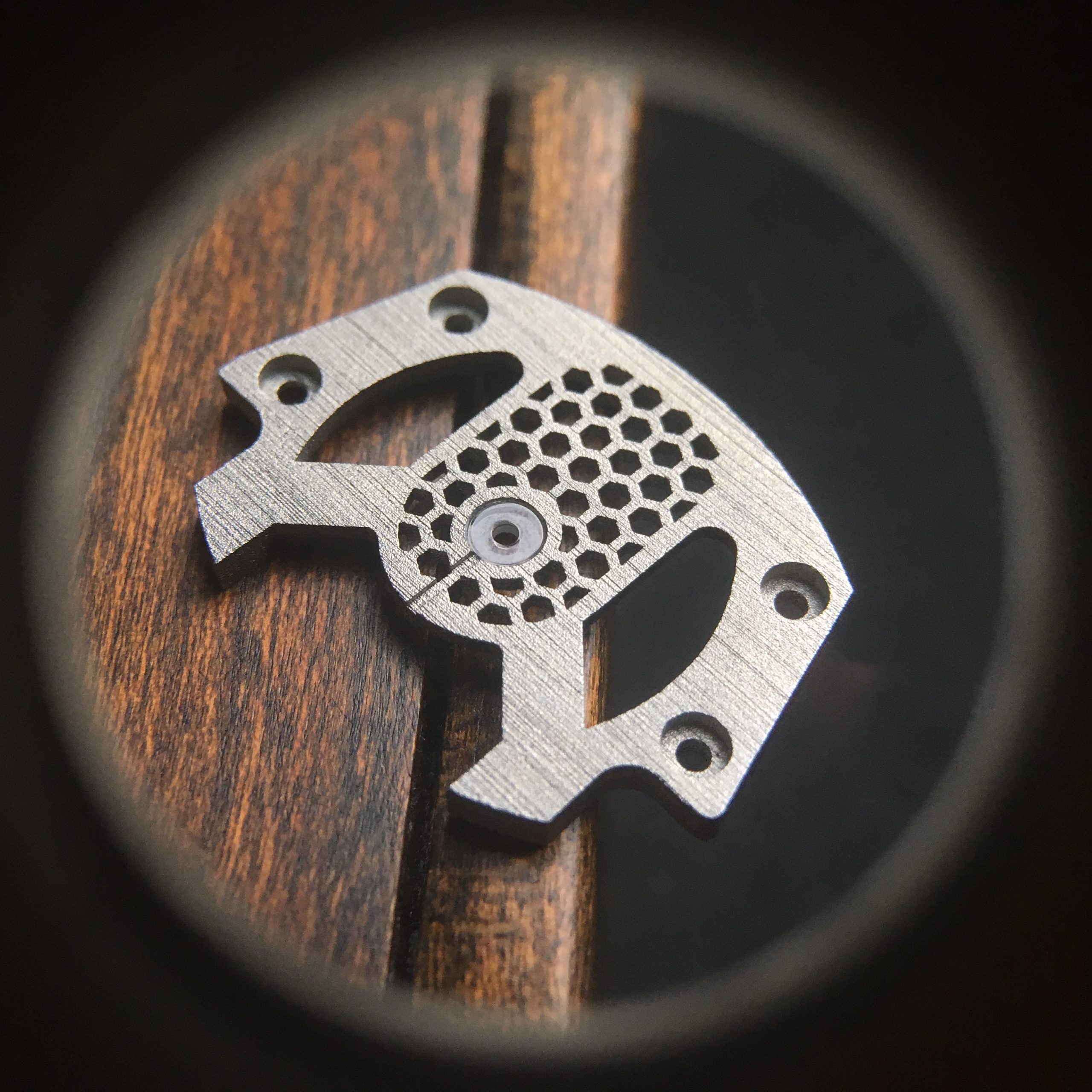 The top plate of the Barrelhand Project One watch is Binder Jet printed.

For the movements, he turns to Swiss Eterna 39 modules and then Barrelhand reworks them to build its unique time display.  In fact, the watches offer Geneva-gear jump-hour mechanism and a linear cam path minute system so that the watch is constantly in motion throughout the day. The jump hour, displayed at 12:00 on the watch, uses a Geneva gear that can be set both forwards and backwards. The hour wheel is held in place using a printed steel movement bridge (the world’s first in a production watch).

The linear minute display beneath the hour indication showcases the minutes in two colors and an aperture at 6:00 indicates which color the wearer should be reading the minutes from. While the concept looks simple, it is actually quite complex. The entire base dial of Project 1 rotates once every hour and has a cam path cut into its surface. As the dial rotates, a needle traces the cam path, guiding the pointer up and down to display the minutes. 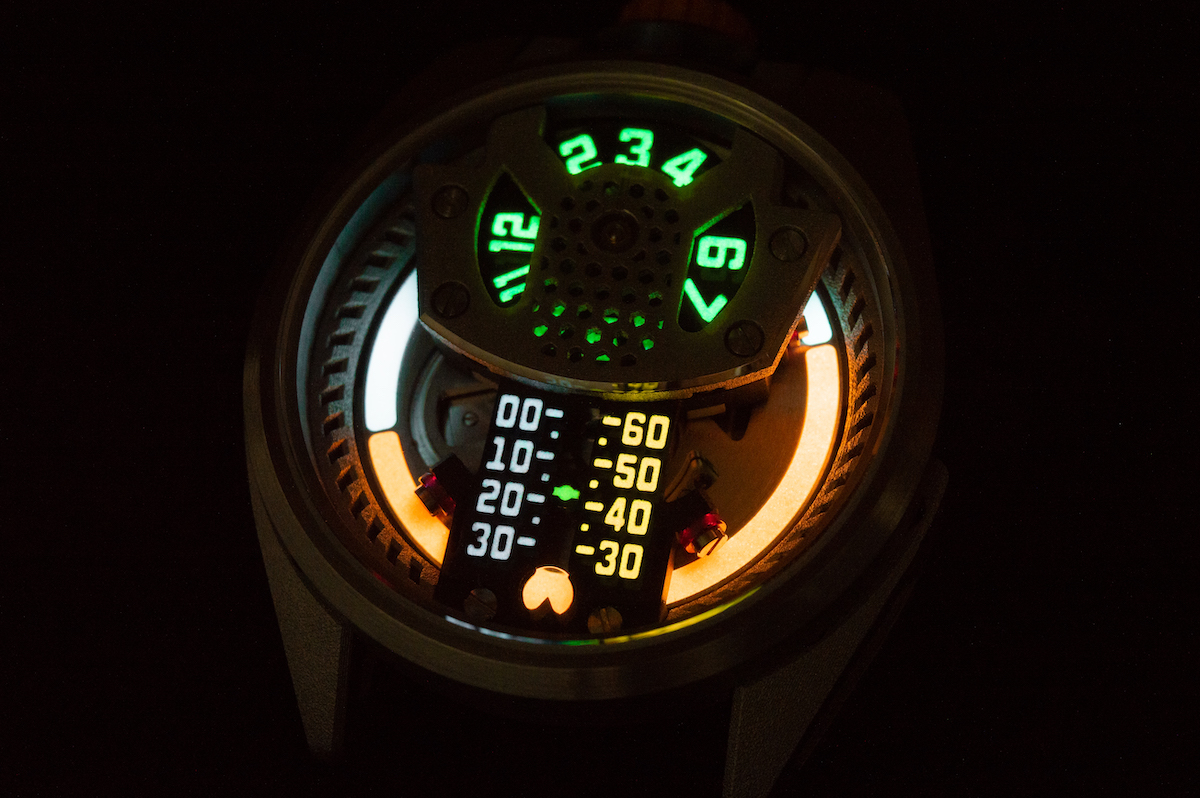 The Barrelhand Project One watch feature Super-LumiNova engravings and numbers.

Project One features Super-LumiNova engravings and indicators for easy night time reading and several concepts were put into place to lighten the wight of the watch. Direct Laster Metal Sintering is used to integrate the leather strap. Additionally, a crown release system was created using steel Binder Jet printers that works by sliding the lever to the left to disengage the crown and set the time.

Bachand designed the Project One and did all of the research and development for the prototypes, but for the final product he works with watchmakers and different artisan across America.
“It’s more about the collaborative effort, people working together. It’s incredible to see how much goes into the making of a single watch. There is a lot of talent in America, but no network for supplies like there is in Switzerland, so for me it was a matter of connecting the dots. Those dots include leather worked straps made in Arizona, case parts made in Oregon, and more. Even the crystals and gaskets are made in the USA.

With half of his first two sets of watches pre-sold already, Bachand says he intends to continue to create the Project One watches in additional small batches this year. 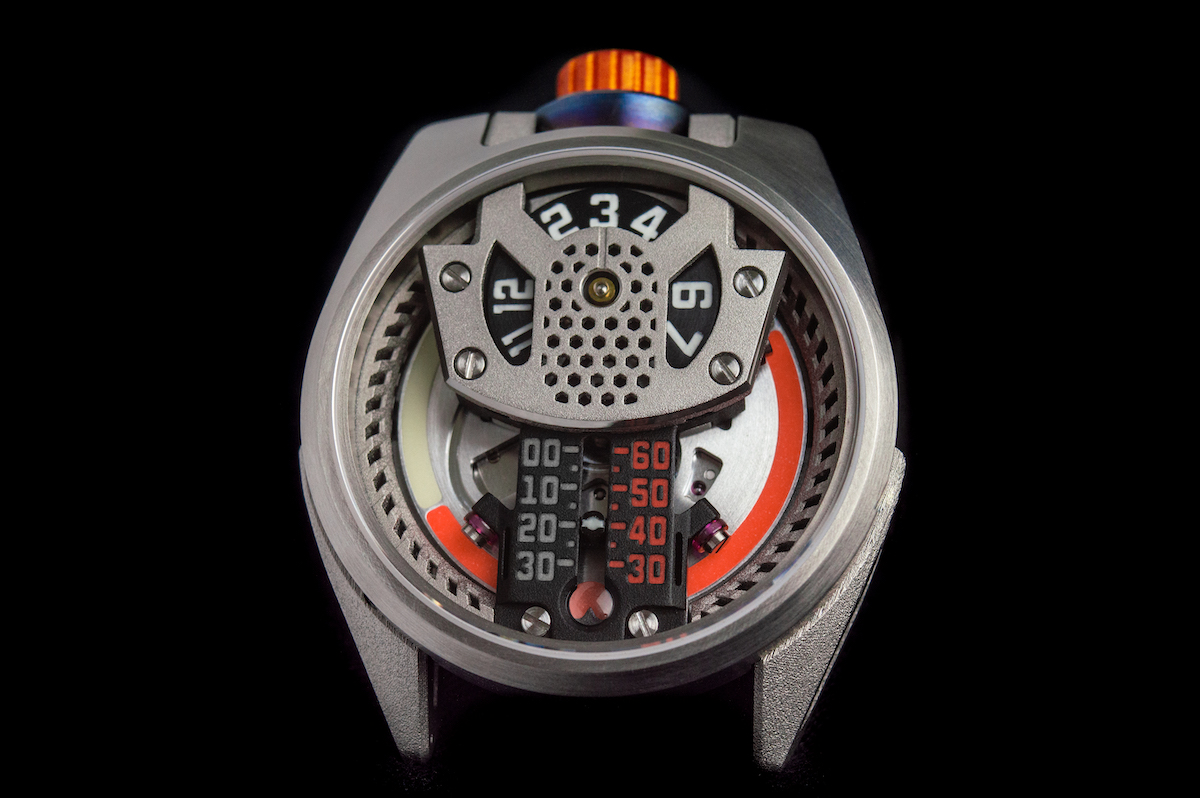 Because Barrelhand makes all of its prototypes using 3D printing, the research and development costs are much less than with traditional processes.