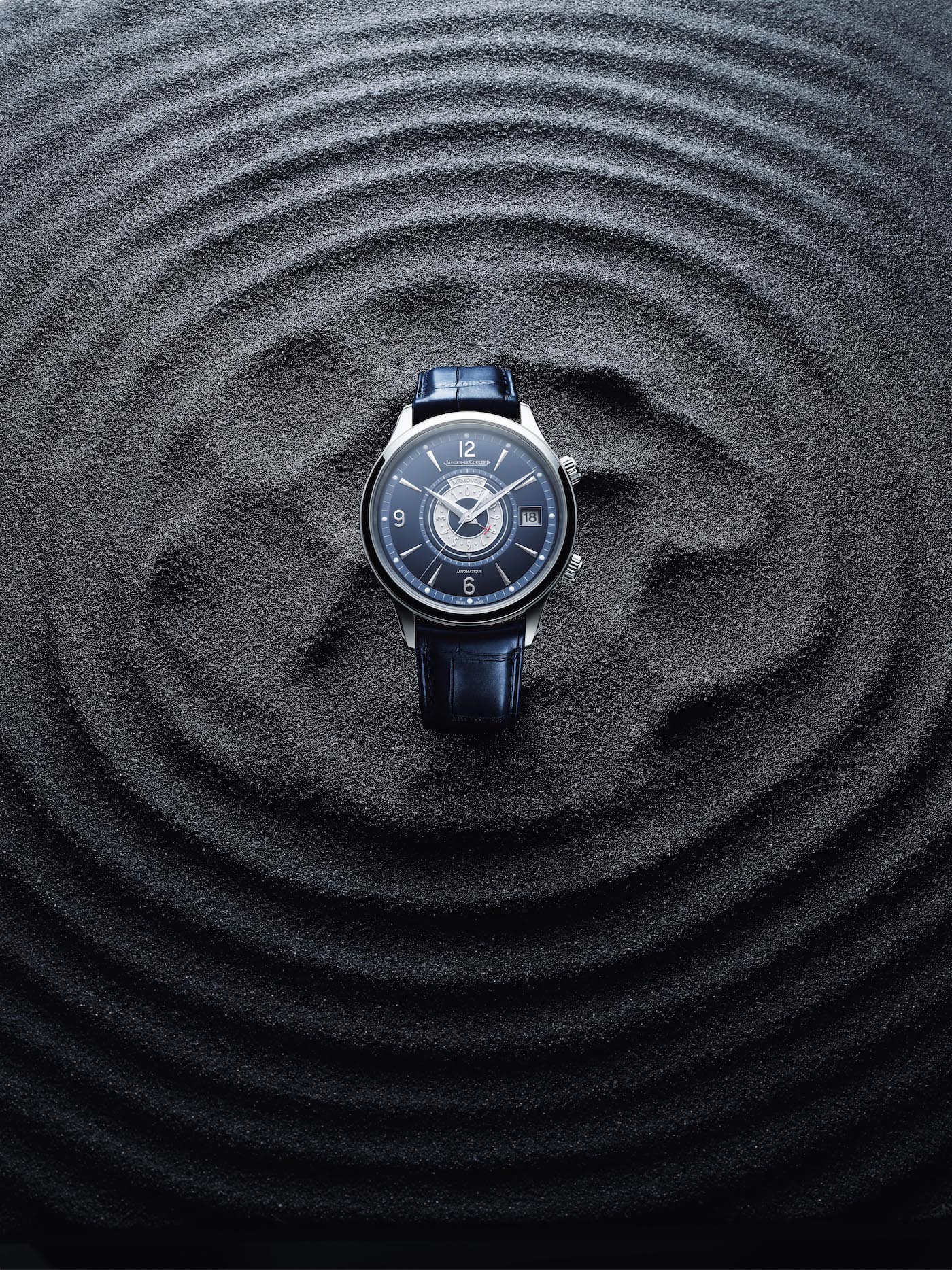 Since its inception in 1833, Swiss  watch brand Jaeger-LeCoultre has been driven by a passion for innovation, and has regularly set new standards in the watch industry. Easily one of its most beloved and iconic lines is the Memovox, which is today part of the Master Control collection.Today, the brand unveils two new Memovox watches that will have collectors clamoring: Master Control Memovox and Master Control Memovox Timer.

Jaeger-LeCoultre is one of very few brands that builds alarm watches, and has been doing so since it launched its first Memovox Alarm watch 70 yeas ago. Only those brands that are already masters at chiming mechanisms could also master the alarm watch back in the post World War II era days. While repeaters use multiple hammers and gongs and take their time chiming a melodious tune of hours, quarters and minutes, the hammer in  an alarm watch must strike the gong very quickly multiple times — a difficult feat. One Jaeger-LeCoultre executes well. 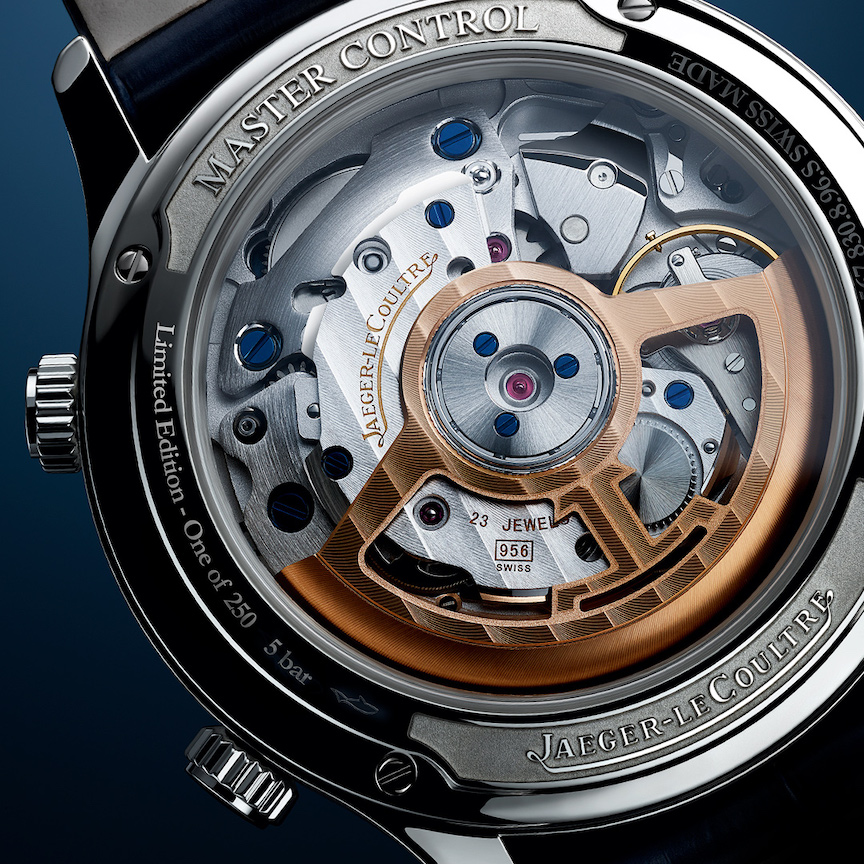 The newest generation of Jaeger-LeCoultre Memovox watches are a deft blend of vintage inspiration and contemporary styling. In addition to new functions and updated movements, the watches boast sapphire case backs and sophisticated dials. The addition of a sapphire case back was not a simple thing, because in previous generations of Memovox watches, the gong was attached to the closed case back. In order to allow wearers to view the hammer in action, the engineers at Jaeger-LeCoultre had to rework the entire striking mechanism so the the gong is attached to the case side instead of the back.  Each of the new watches is presented in the new 40mm Master Control case with sloped bezel, curved lugs and both polished- and satin-brushed finishes. 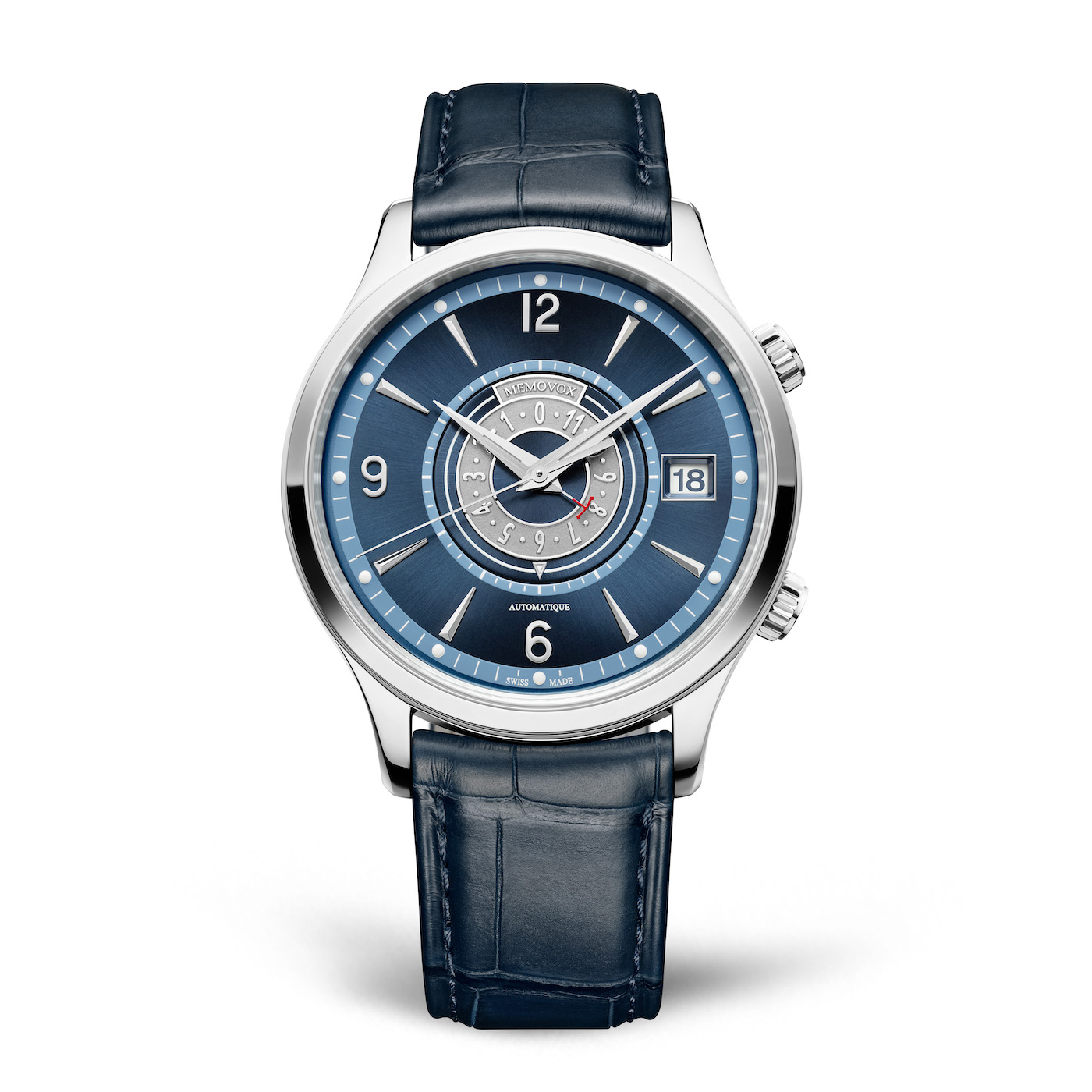 The new Master Control Memovox Timer houses an entirely new alarm-setting mechanism in the self-winding Caliber 956. as explained above. It also — in typical Jaeger-LeCoultre style — boasts an added useful function: the Timer. The Time was developed expressly for this new watch and allows the wearer to set the alarm according to the number of hours that should elapse before it rings. The watch also allows for traditional setting of a particular time, as well. The two types of indications are linked so that the wearer can choose the method he or she wants to use and the second indication will automatically move to the corresponding position.

The dial of the watch is exceptionally easy to read and use thanks to the concentric rings in two shades of sunday blue finish, as well as an inner ring that showcases the elapsed hours-until-alarm using polished numerals and a hand tipped with a red JLC logo. On the outer edge of the ring sits the traditional Memovox signature triangle marker that points to the time the alarm will ring. One of the coolest features of the new piece is the luminescence of it. In the dark, the indexes and the inner ring glow green. 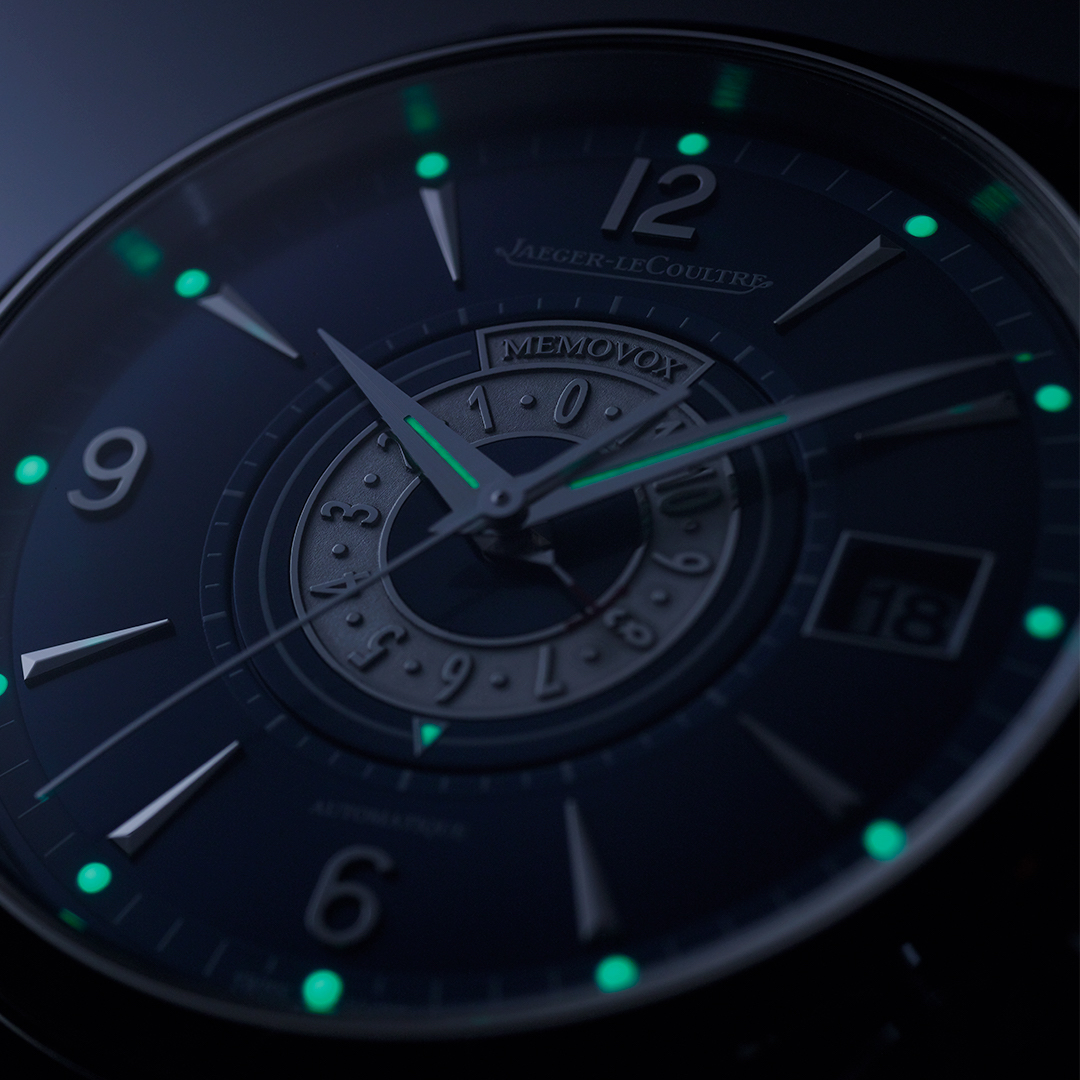 In addition to the new striking mechanism, the Master Control Memovox Timer features a new gold rotor that is open-worked and decorated with Côtes de Genève to match the fine finishing on the movement plates and to ensure a great view of the hammer in action. A key element that ties the present with the past is that the alarm is still the traditional school-bell sound. Just 250 pieces of the Jaeger-LeCoultre Master Control Memovox Timer will be made, each retailing for $15,600. 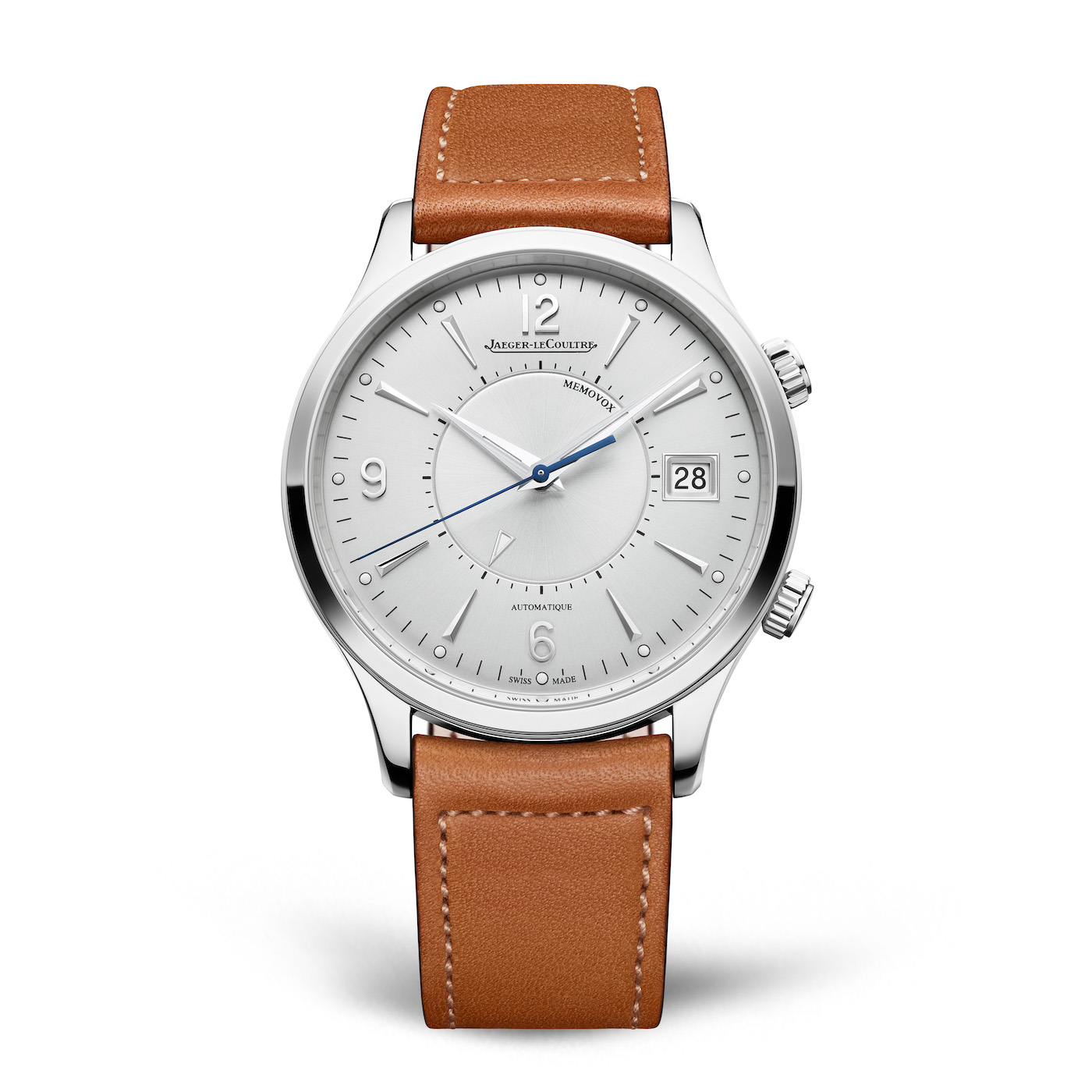 The second model in the collection is a reinterpretation of the original 1950 Memovox but with streamlined features. The clean dial also boasts a new combination of function, thanks to the addition of a date display along with the alarm. The silver sunray-brushed dial features applied indexes  in an elongated triangular shape that recalls the 20th century early Memovox watches. The stainless steel alarm watch will retail for $11,600. 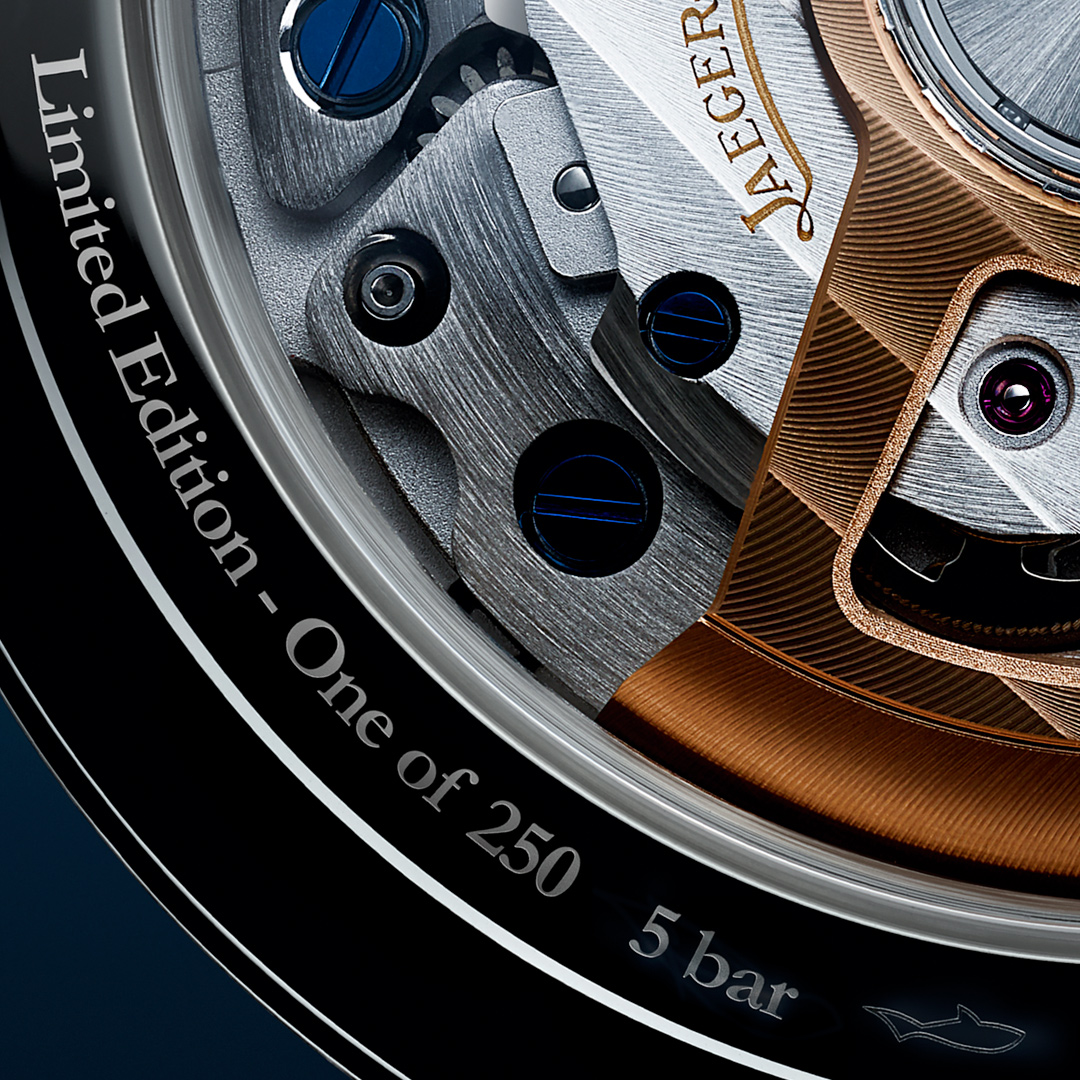