The little blue box that is a signature of Tiffany & Co.

An American legend, Tiffany & Co. may have a lot more problems on its plate than it has in the past few years. The iconic Tiffany blue  — known and loved by Americans and others around the world — is a signature that has long stood  for American success. In the past few years, though, the brand was experiencing difficulties. Last year, the LVMH (Louis Vuitton Moet Hennessey) Group aground to purchase the American giant for $16 billion — with the deal originally slated to be sealed this year. However, according to an article published in WWD, LVMH is reconsidering moving forward with the buyout.

According to the WWD report, the LVMH Board met in Paris to discuss whether or not the acquisition was still viable — given the economic and health challenges brought on globally due to COVID-19. For this business agreement,  the biggest factor for LVMH Board members seems to be whether or not Tiffany & Co., with hundreds of retail locations across the country, can bounce back after the pandemic. Concern was also expressed about whether or not the company will still be able to meet the debt agreements and covenants as was stipulated in the acquisition contract. Of the giant’s 124 global stores, 94 are in America, and of its nearly $2 billion in sales lead the market. Only the Asia Pacific region is close with about 28 percent of the world’s total sales for the luxury goods retailer. 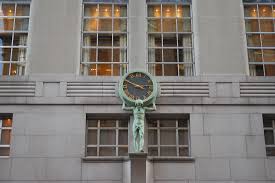 The Atlas clock outside the Tiffany & Co. New York store is a landmark.

Prior to the global pandemic, the LVMH acquisition of Tiffany & Co. would have given the Group an even stronger foothold in America, as well as another legendary name to add to its already impressive roster. In the watch and jewelry segment, LVMH owns Bulgari, TAG Heuer, Hublot, Zenith, Fred and Chaumet. Hopefully, the buyout — one of the largest in the luxury watch and jewelry sector — will be able to move forward. Most likely, what will need to happen for the deal to move ahead, is a renegotiation of sorts. After all, very little today is worth what it was just three months ago before the stock markets and retail environment drastically fell.

Additionally, another influencing factor comes into play with the recent political unrest in America resulting from the death of George Floyd on Memorial Day (May 25th) hangs heavy in the air. Floyd’s death, currently deemed to be a direct result of brutal force inflicted by a police officer during an arrest of Floyd, has incited peaceful protests for change, but, unfortunately, also riots, looting, destruction of property and further senseless killings. Every day Americans awaken to learn what riots and destruction occurred while they slept. People of all races and color living in the big cities are in fear. Still, many continue to try to peacefully protest for change, marching in unison — some wearing masks, others not — to make a difference. All of the scenes witnessed on social media and television have naturally reached the world, and shaken many others in countries globally, as well.

With so many deaths still piling in as a result of COVID-19, we are faced with more deaths and destruction.  With so many unemployed and even homeless, in this environment, it seems almost unthinkable to discuss billion-dollar buy-out deals. However, business must go on. Difficult decisions must be faced. Granted, the world of luxury goods will morph and change, but for now, there is no choice for these big groups but to carry on, make plans, and keep the economy going, too.