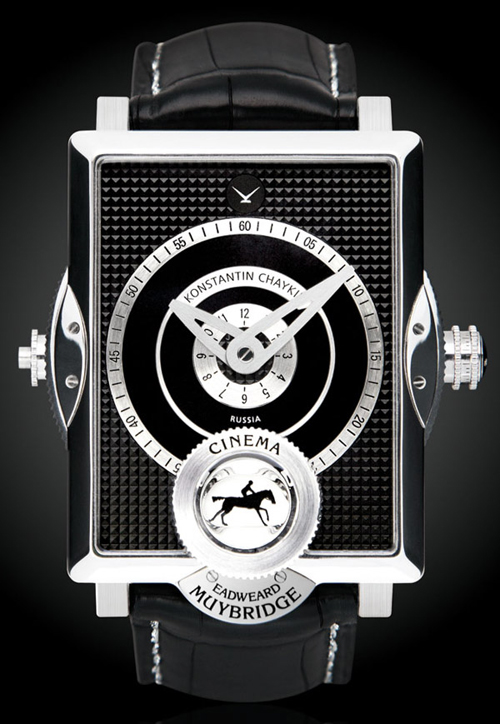 We don’t often cover the world of Russian made watches, but today we do – because one top watchmaker brings Cinema to the wrist. Konstantin Chaykin – known for his incredible pieces – unveils the Cinema watch – that – with the push of a button at 9:00 — features an animated depiction of man galloping along on a horse.

The incredible watch pays tribute to Eadweard Muybridge – inventor of the zoopraxiscope (circa 1879) that is credited as being the first movie projector of sorts. It features a wheel with a series of pictures on it that could project an animated image. In the new Cinema, Chaykin has built such a projection aperture into the timepiece in a round disk at 6:00 beneath the dial. The animation can run for up to 20 seconds and is created using a disc with 12 images on it.

View this video to see the animation (a series of rapidly spinning images) in all its fast glory.

The round aperture in which the animation appears is at the base of the rectangular watch – with the entire case designed to resemble old movie cameras. 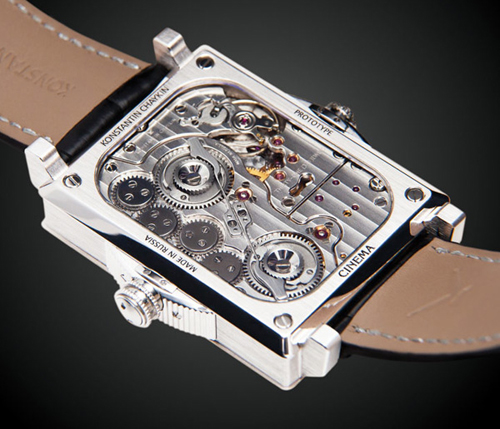 The watch houses the Konstantin Chaykin Caliber KCM01-1 made totally in-house. It is a manually wound movement with 48 hours of power reserve. It is equipped with separate mainspring barrels for the timekeeping and the animation, each wound by turning the crown in a different direction.  It should retail for around $65,500.