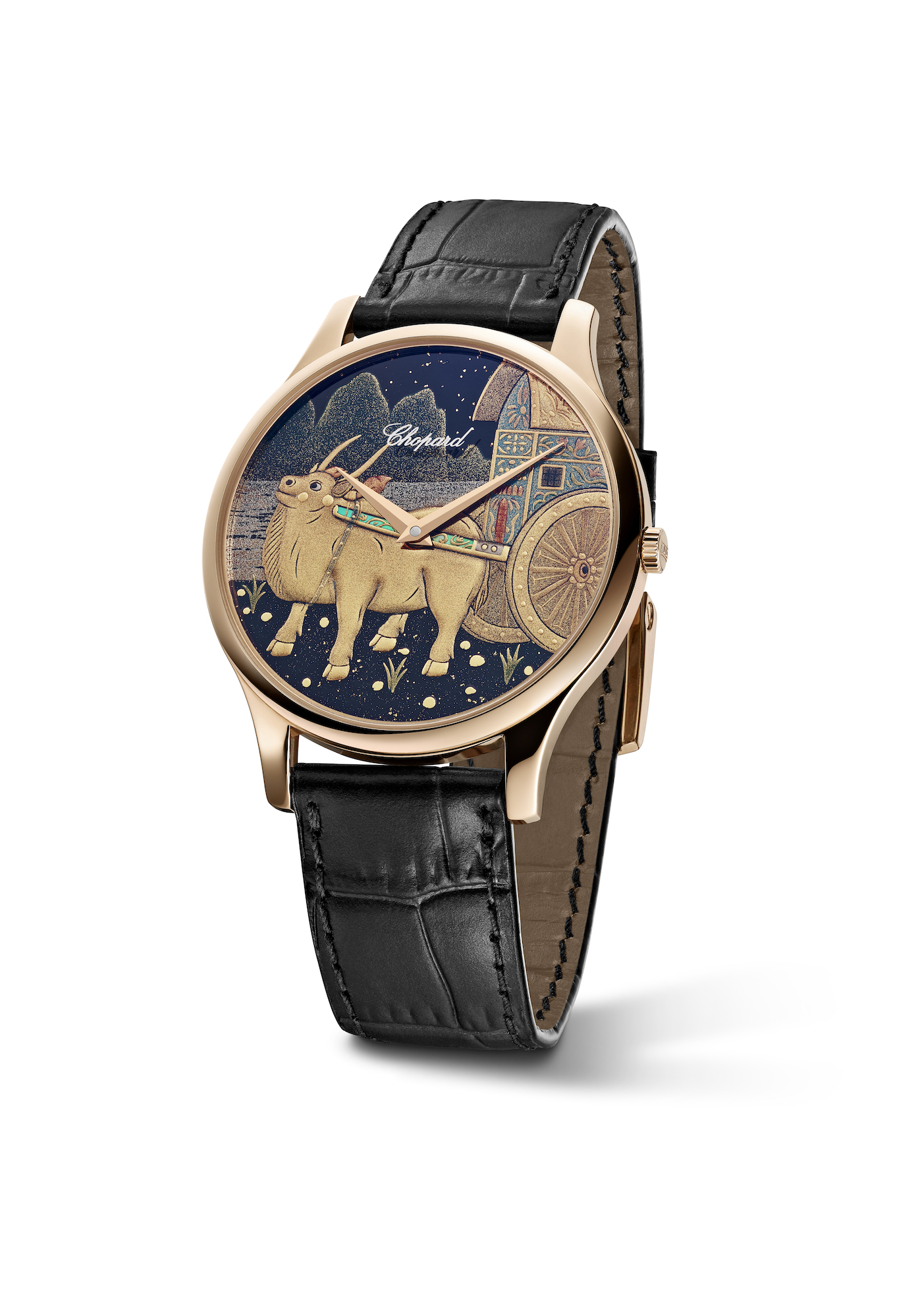 With next month marking the Chinese New Year, certain luxury watch brands are celebrating the event with specially made watches that honor the Chinese zodiac symbol. For Chopard, creating the L. U. C XP Urushi Year of the Ox watch was a particularly intriguing feat. That is because Chopard  turns to the ancient Asian craft of Urushi to create its dials.

This year pays homage to the Ox, the dedicated worker without whom the Chinese could not have tilled their farmlands. With this animal at the center of the Chinese zodiac from February 12, 2021 to January 31, 2022, the year is expected to reap harvests and honor wisdom. For its new watch, Chopard depicts the ox as a working animal, complete with reins and beautiful  cart in tow. 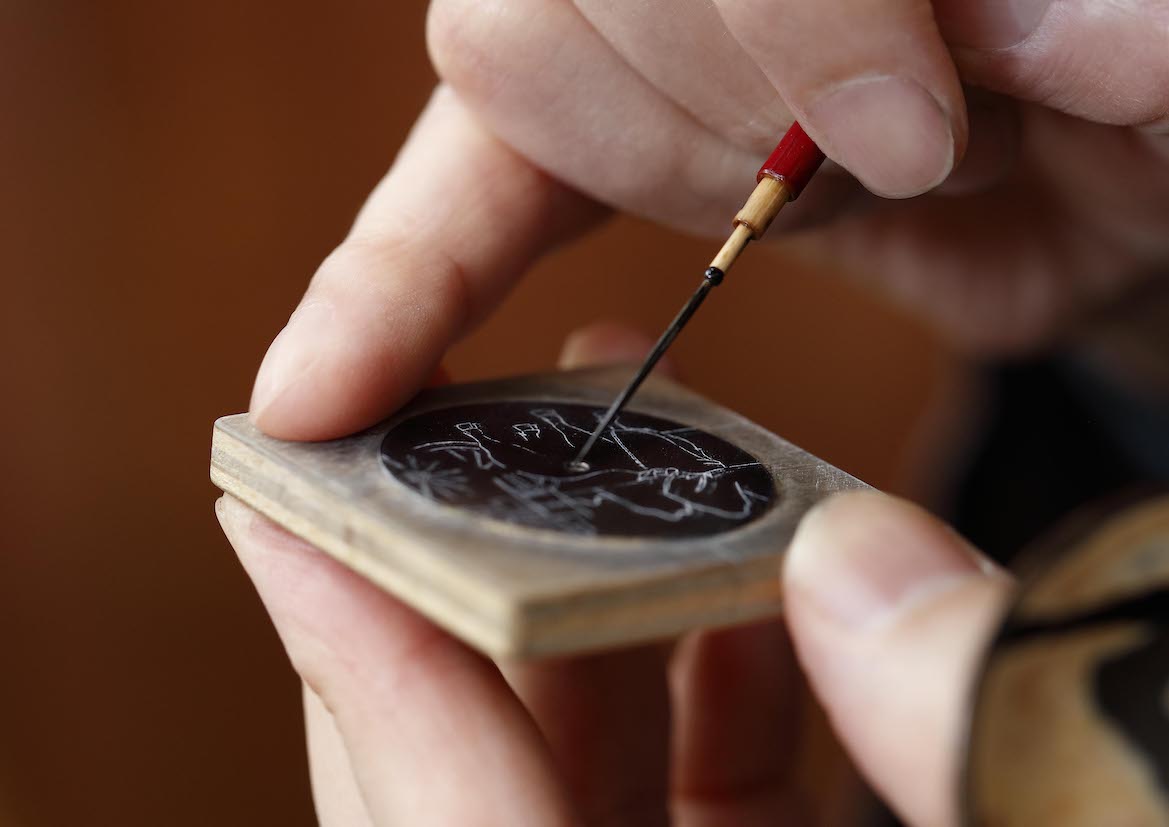 Each dial of the Chopard L.U.C XP Urushi Year of the Ox watch is created entirely by hand using Urushi and Make-i.

The dial of the ultra-thin watch is designed and then created by Japanese master lacquer artisans that turn to sap from the Urushi tree for painting. The painting also combines the Japanese technique of Maki-e, which witnesses gold dust being added to the lacquer. Due to the time-consuming nature of the making of the dials, just 88 pieces will ever be produced. The dials are made in the workshops of the century-old company Yamada Heiando and are individually painted by lacquer artist Minori Koizumi.

He begins with a background layer of black lacquer made from the sap of the tree Toxicodendron Vernicifluum, and then continues to paint layer upon layer using different colored lacquers that are achieved via a complex heating process. Eventually, he adds gold flakes to the lacquer for a shimmering affect. The dial features a carved golden ox harnessed to a colorful wagon inspired by the emperor’s wagons. The overall effect truly pays homage to the exceptional and loyal ox, as well as to nature and agriculture. 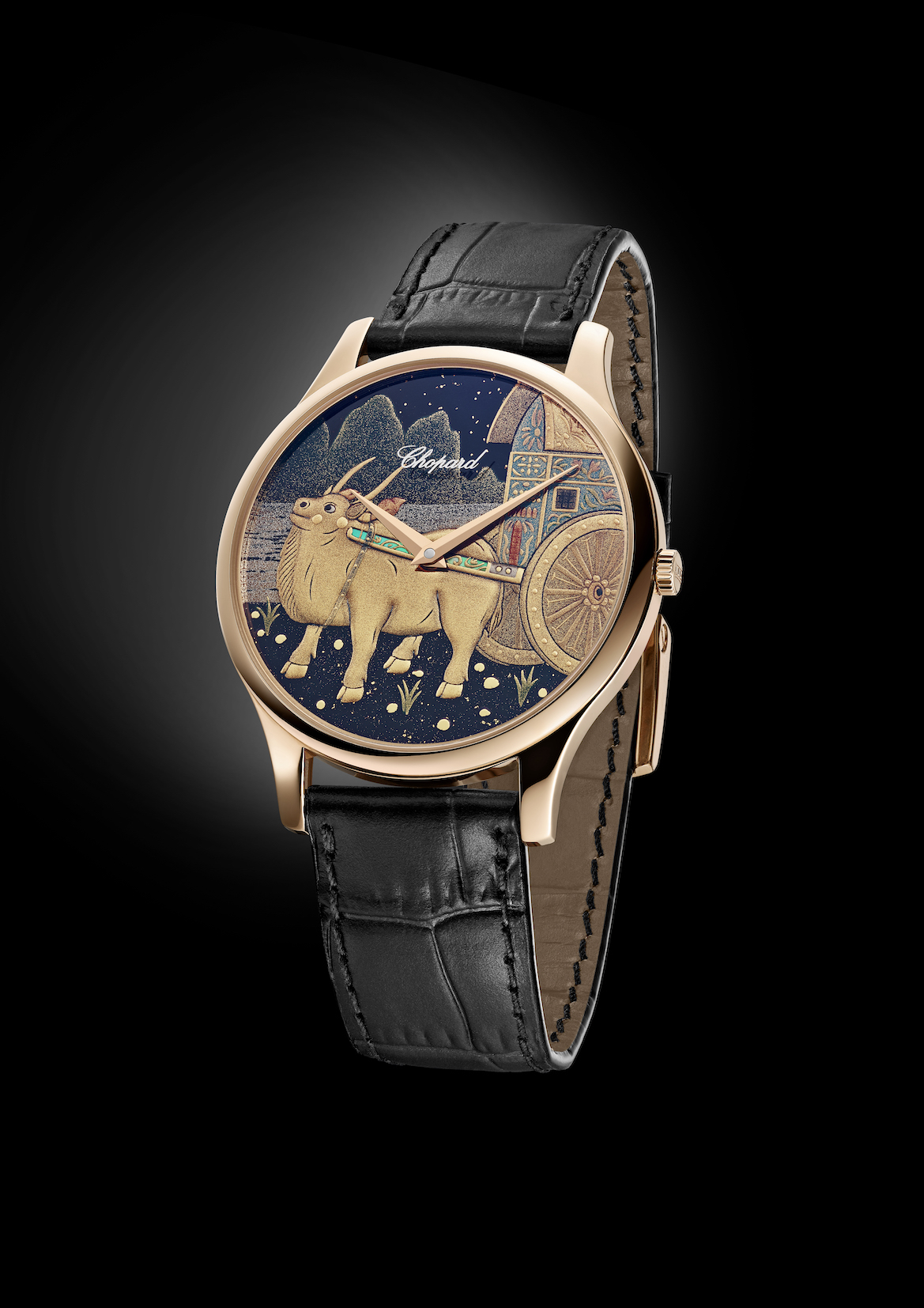 The 39.5mm watch is made from a solid block of 18-karat roes gold that has been ethically sourced by Chopard. This year’s Chinese zodiac watch is powered by Chopard’s in-house-made L.U.C 96.17 ultra-thin (3.3mm thick) movement so that the entire watch, when cased, measures just 6.8mm in thickness. This caliber boasts a high frequency so that it can wind two barrels efficiently and offer 65 hours of power reserve. Each movement is meticulously finished and some of the components can be viewed via the exhibition-style transparent sapphire case back.  The watch is finished with a black alligator strap. While we currently do not have the price of this watch, last year’s Urushi Year of the Rat watch sold for $24,600, so we can expect similar pricing. UPDATE: The price for the Year of the Ox watch is the same as last year’s watch: $24,600.