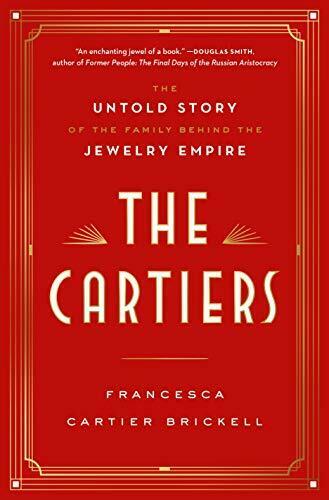 The Cartiers: The Untold Story of the Family Behind the Jewelry Empire by Francesca Cartier Brickell.

Released late last year, the new book entitled The Cartiers: The Untold Story of the Family Behind the Jewelry Empire— written by Francesca Cartier Brickell — outlines the story of the family behind Cartier and it is an interesting read. For those who enjoy multi-generational stories, a a look at hotel social history of the 20th century, this book will have you entertained from start to finish.

It is filled with four generations of history, of decision makers, of jewelry and high society.  A Ballantine hardcover, the 500-plus-page book is told by a fourth generation Cartier who stumbled upon historic letters and correspondence saved by the Cartier family. During a family gathering in the South of France, Francesca Cartier Brickell trekked to the basement to recover a special vintage champagne for the 90th birthday of her grandfather Jean-Jacques Cartier. While she didn’t find the champagne, she found a trunk stuffed with hundreds of letters, announcements, and more. While the family thought the treasure had been lost, it was now found. Francesca spent nearly a diced putting all the pieces together, tacking down the history and putting stories into print.

In this book there are stories never before revealed about the family, friends and influencers and socialites who helped build an empire. It retails for $35.

Introducing The Vacheron Constantin Year Of The Rabbit Watch
January 15, 2020

Introducing the Piaget Year Of The Rabbit Watch
January 15, 2020