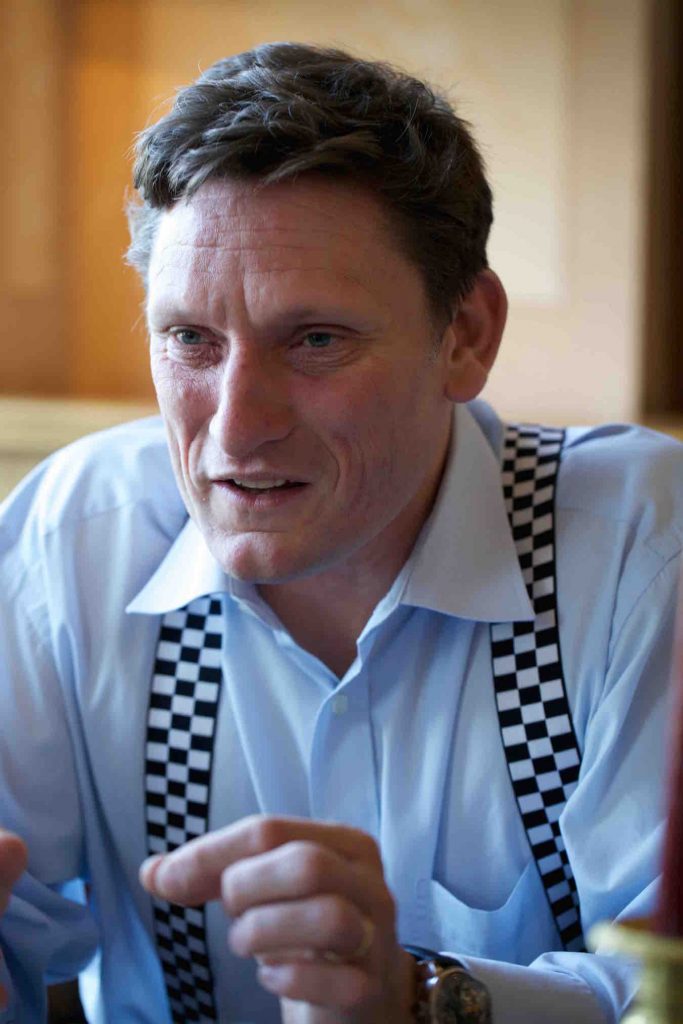 Last week, we brought you the news of the new Greubel Forsey Double Tourbillon 30-Degree Technique Sapphire here.  Now we bring you an exclusive interview with Stephen Forsey about exactly how that watch — in its totally transparent format — came to fruition.

From the very start, Greubel Forsey designed its Double Tourbillon 30-Degree Technique to amaze the wearer with an almost unimpeded view of its awe-inspiring double tourbillon in action. Its open architecture invited the viewer inside to enjoy watching as gears mesh on a multi-level platform of polished precious metal, frosted finishes and contrasting colors. You may also recall that the time displayed on this early Greubel Forsey design is known for its extreme accuracy. This watch features the very movement that set the standard for accuracy in the tourbillon class at the 2011 Concours International de Chronométrie. It’s also the same movement, in its Historique model form, that took home the Golden Hand award at the 2010 Grand Prix d’Horlogerie de Genève (GPHG).

So when Greubel Forsey’s U.S. team heard serious client requests for Stephen Forsey and Robert Greubel to create a sapphire-cased watch, the pair immediately considered placing such a case around their multi-award winning Double Tourbillon 30-Degree Technique. No other model was even in the running, according to Forsey, who spoke to A Timely Perspective last week in New York as he unveiled the result of just such a venture: the new Double Tourbillon 30-Degree Technique Sapphire. 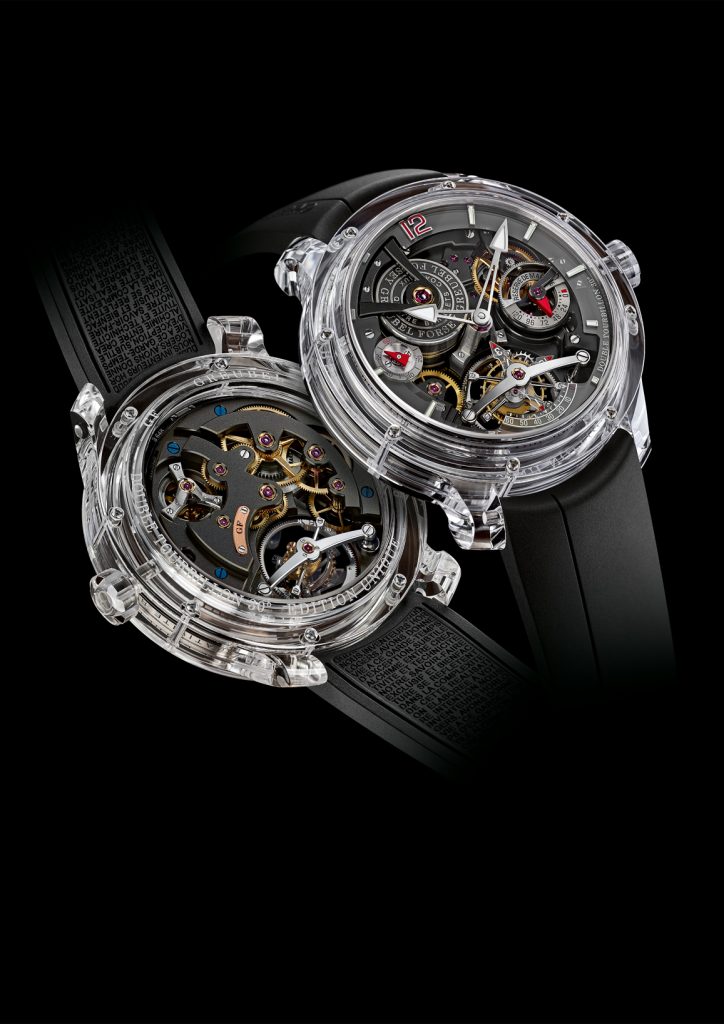 “We thought this could be the moment to culminate the brief for the Double Tourbillon 30 Degree Technique, which was to have a three-dimensional open architecture for the movement,” Forsey explains. “There was no doubt about which piece we were going to use with the sapphire. The Technique sums up so well what we do. Now with the sapphire case we thought we could go beyond that to get that full transparency.”

Forsey notes that the new sapphire piece, exciting as it is, is not Greubel Forsey’s first experience creating timepieces with unusually large sapphire components.

“We’re not strangers to sapphire crystal,” he recalls. “We’ve used it in the Contemporary and the GMT, and in the hour ring for the Technique. Even earlier than that we had the Quadruple Tourbillon, where we showcased four tourbillons in the space for two, and we had two sapphire crystal sections. While they look almost like two-dimensional plates, they are actually complex sapphire bridges. This goes back to 2008. Sapphire is a subject that has always been on our radar.” 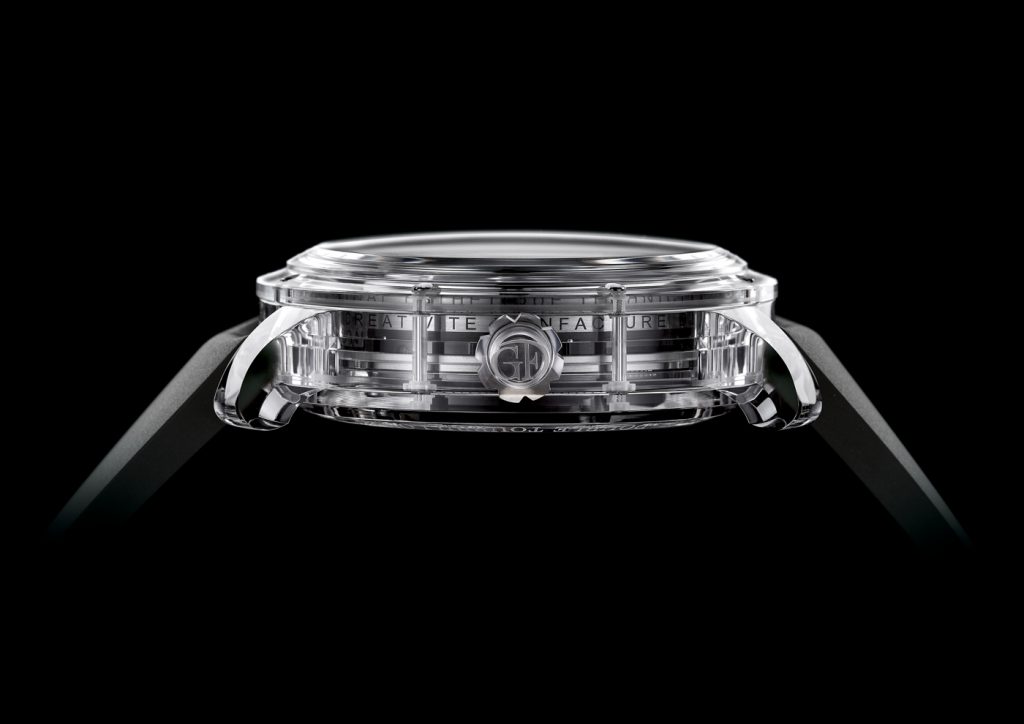 The transparent case enables the wearer to truly view the movement architecture from all sides.

But despite Greubel Forsey’s extensive experience with sapphire, and with working with one local Swiss specialist, Forsey admits that working with the super-hard man-made material is ‘tricky.”

“For the sapphire we wanted to go monoblock with the case body, which means a high level of difficulty,” he says. “We kept the same case, but added three-dimensional architecture to the lugs. It’s a three-piece case: the sapphire crystal back and bezels are one piece each, plus the one main body of the case. So it contrasts with the original, where we had removable lugs but the whole thing was hidden. With these new lugs there is a lot of material sticking out, and you have to get these complex forms ground and polished to get to our level of finish.”

Sapphire crystal is not a flexible material, he explains, which is just one reason sapphire is difficult to shape into a watchcase.

“There’s not any room to maneuver,” Forsey says. “The challenge was when they start off with five sapphire blocks how many will make it to be finished. The objective is one, maybe two, but it’s an unforgiving material that can even explode in the final polishing. You don’t know. There can be tiny inclusions that you can’t see upfront. Once finished, it’s stable.”

Once formed and polished, the three case components are fitted around the movement in a sandwich format, he explains. 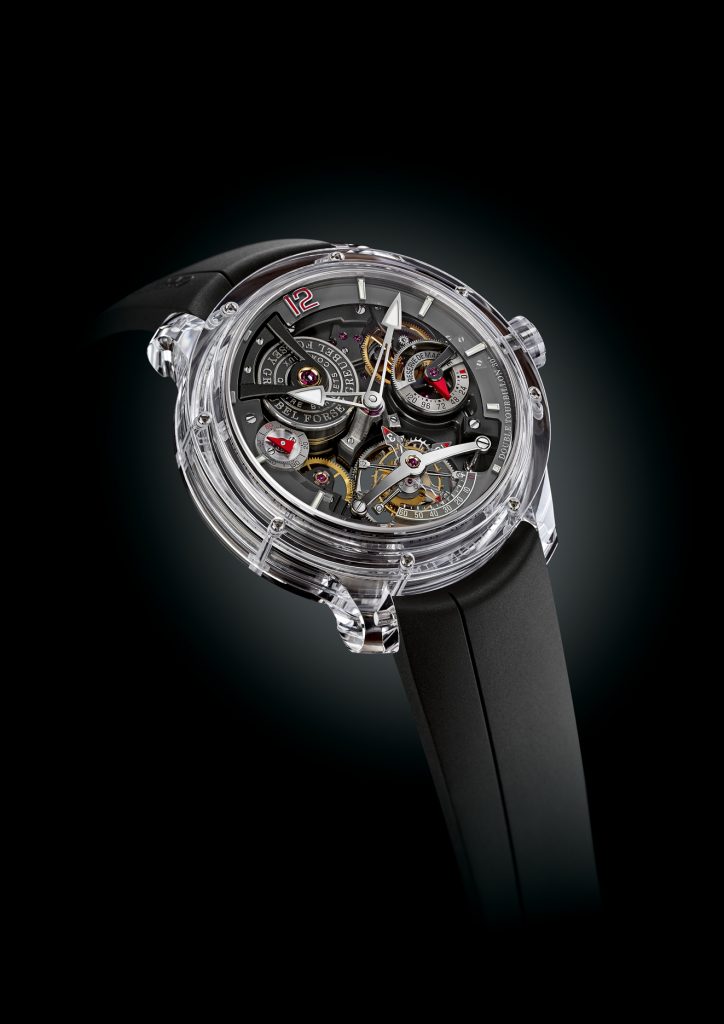 Only eight pieces will be made — all for US distribution only.

“You have screws that go through to the bezel and caseback. That way you get the main body of the case inside the sandwich. The original Technique is 47.5mm diameter, but because the sapphire crystal is not flexible (while even gold and platinum have a bit of flexibility regarding wall thickness) here we needed to beef it up a little bit, so it’s now 49.95mm in diameter. It may sound big, but on the wrist it wears smaller. That sapphire crystal appears to erase itself substantially as you see and feel the movement diameter rather that the case diameter. The height is similar to the original Technique.”

Yet, despite its slightly larger diameter, the Greubel Forsey Double Tourbillon 30-Degree Technique Sapphire, at 140 grams, is actually lighter than the earlier precious metal examples, which weigh 200-plus grams.

Greubel Forsey took the opportunity with this limited edition to rework many of the movement’s aesthetic details to better complement the clarity of the sapphire case. 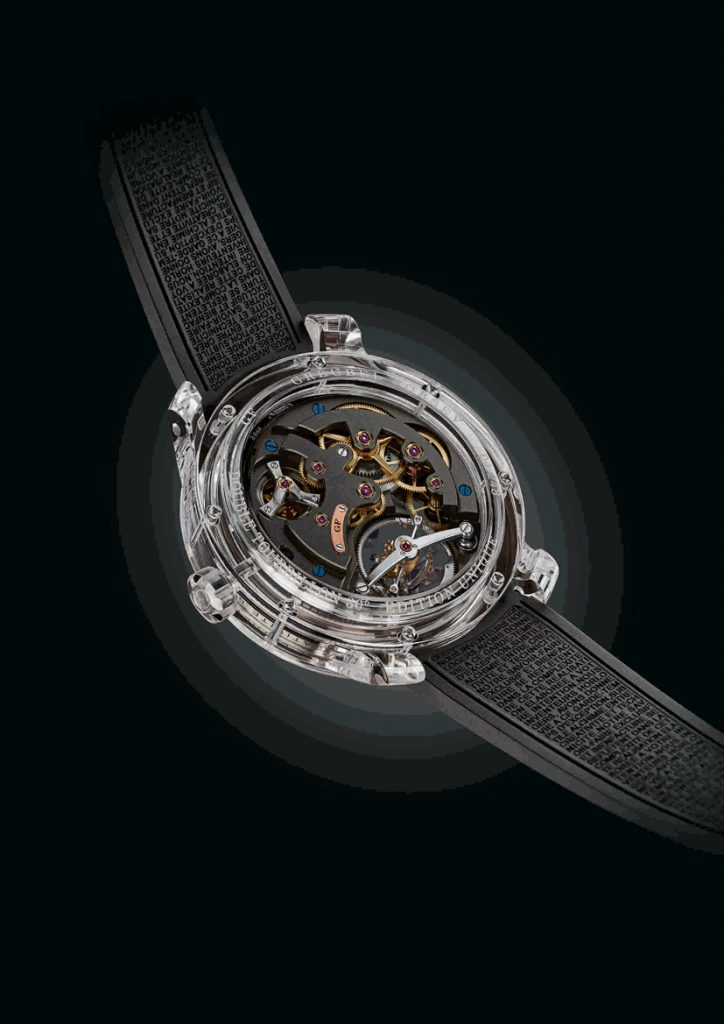 The back of the watch

“The construction of the Technique lends itself nicely to this sapphire. We have the red 12, SuperLuminova indexes, and black bridges almost everywhere with just one or two in steel. The platinum version had a nickel palladium finish. And of course here you have the contrasting architecture. The inside ring has engraving. We wanted to place a synthetic band with it as well, so there is a rubber strap along with an alligator strap and a translucent band–with a polished titanium folding clasp.” 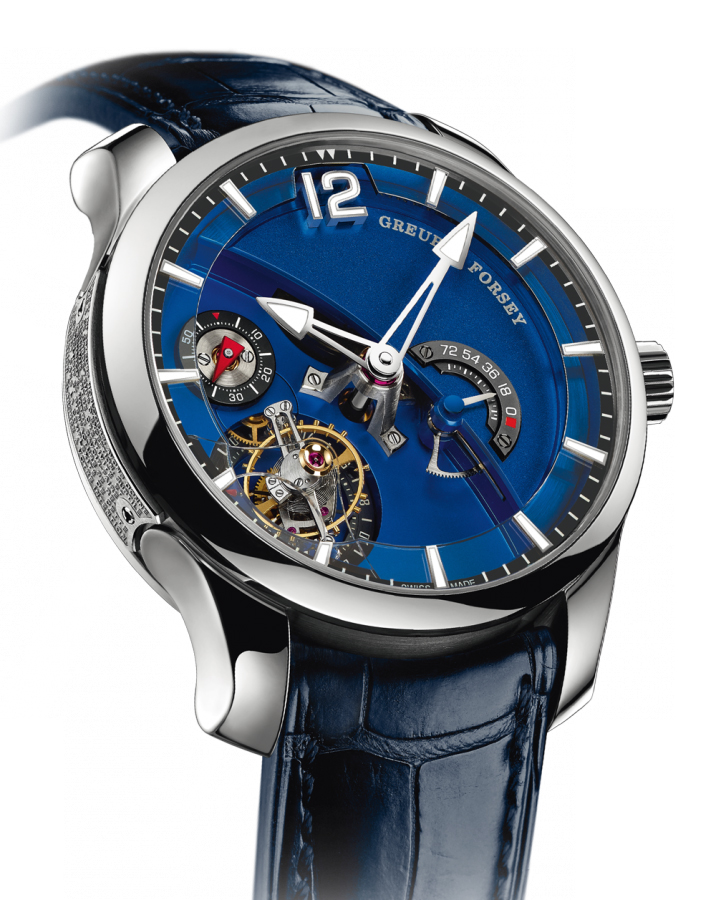