I’m Not Old, I’m Vintage: Confessions Of A 1940’s Bulova WristWatch, And Me 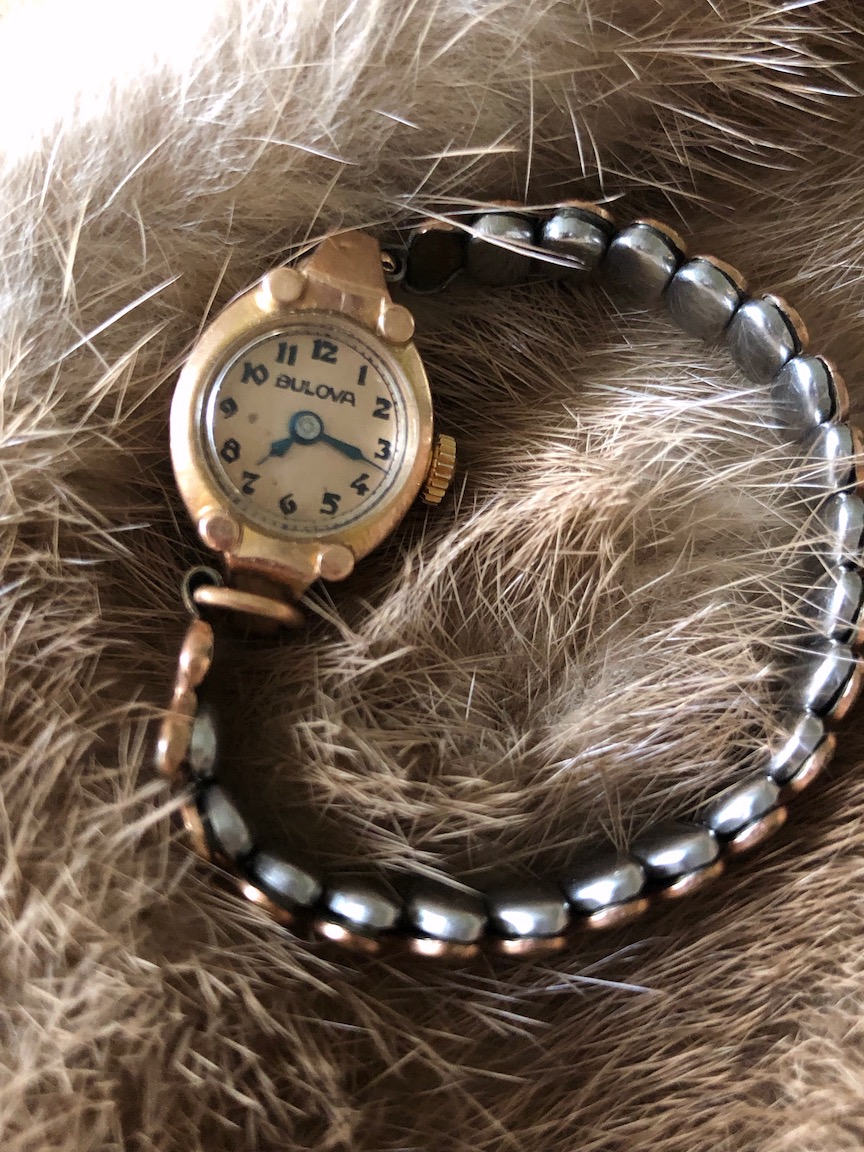 This article first ran on ATimelyPerspective several years ago, but with the craze for vintage watches so intense, I thought it would be fun to share this story again. This time, though, after the watch shows are over, I fully intend to bring this piece to Bulova for its long-awaited overhaul.

A few days ago, I was cleaning out my jewelry box, rearranging and re-examining some of my favorite – as well as my forgotten- jewels and timepieces. When I opened a drawer I hadn’t opened in a while, I found a tiny little rose-gold watch. It was nestled way in the back of the drawer against a green felt base — looking sort of lonely and forgotten. My first thought — even though I am in the watch industry — was ‘Wow, look at this old thing.’

As though it had heard me, the watch seemed to scream back at me: “I’m not old, I’m just vintage. What’s the matter with you?”  I immediately felt, well, a bit ashamed, as well as neglectful. The watch was a tiny mechanical Bulova timepiece — no bigger than the size of my pinkie nail. It has a wonderful rose gold dial with fabulous blue stylized numerals and is finished with an old Speidel-type stretch bracelet. It’s actually quite beautiful.

The Watch’s Adventure In and Out of the jewelry box 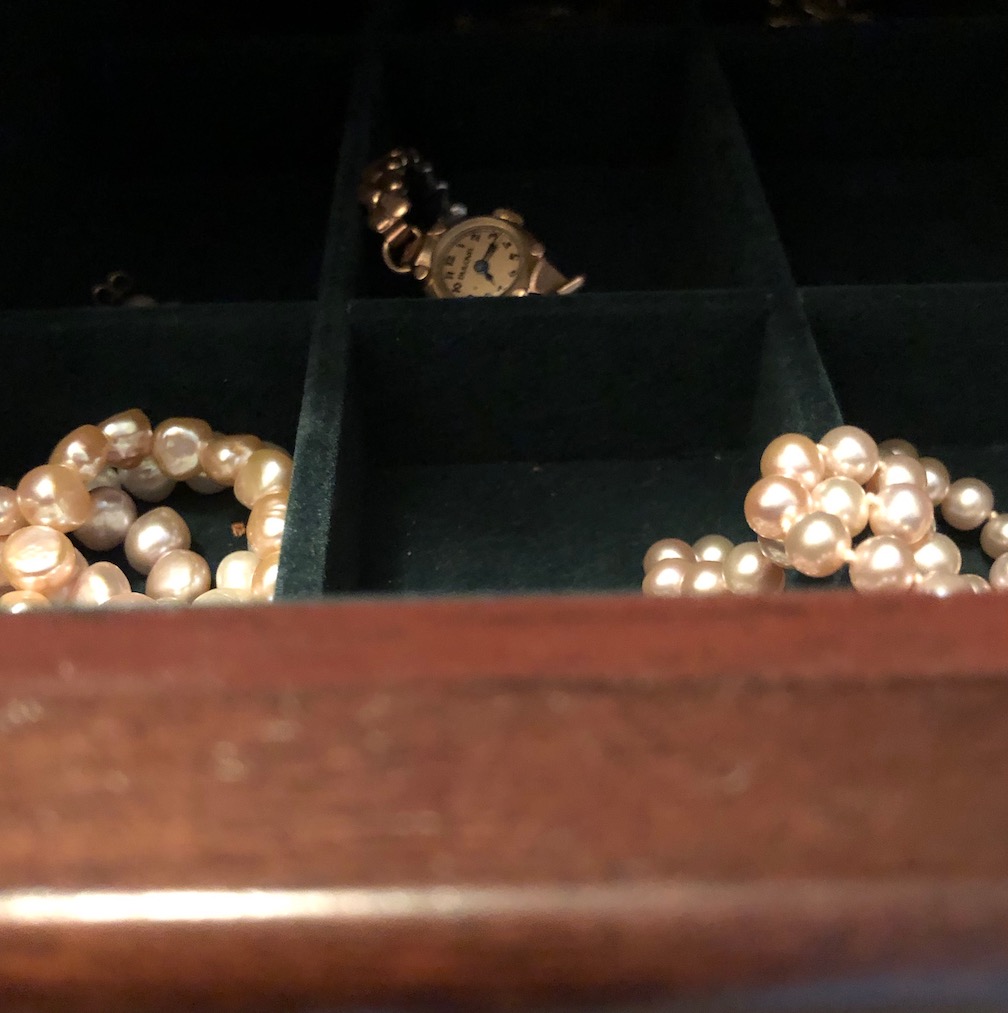 Vintage Bulova found again in the back of a jewelry box drawer.

As I stared at it, I remembered that about a year or so ago, I had been writing a chapter for the new Bulova brand book (thanks Bulova and a colleague of mine,Aaron Sigmond), and I had mentioned the watch to the long-time Bulova execs. I remember telling them that many years earlier – perhaps in the early 1990’s — I had sent the watch to the New York Bulova headquarters — asking if they could restore it. 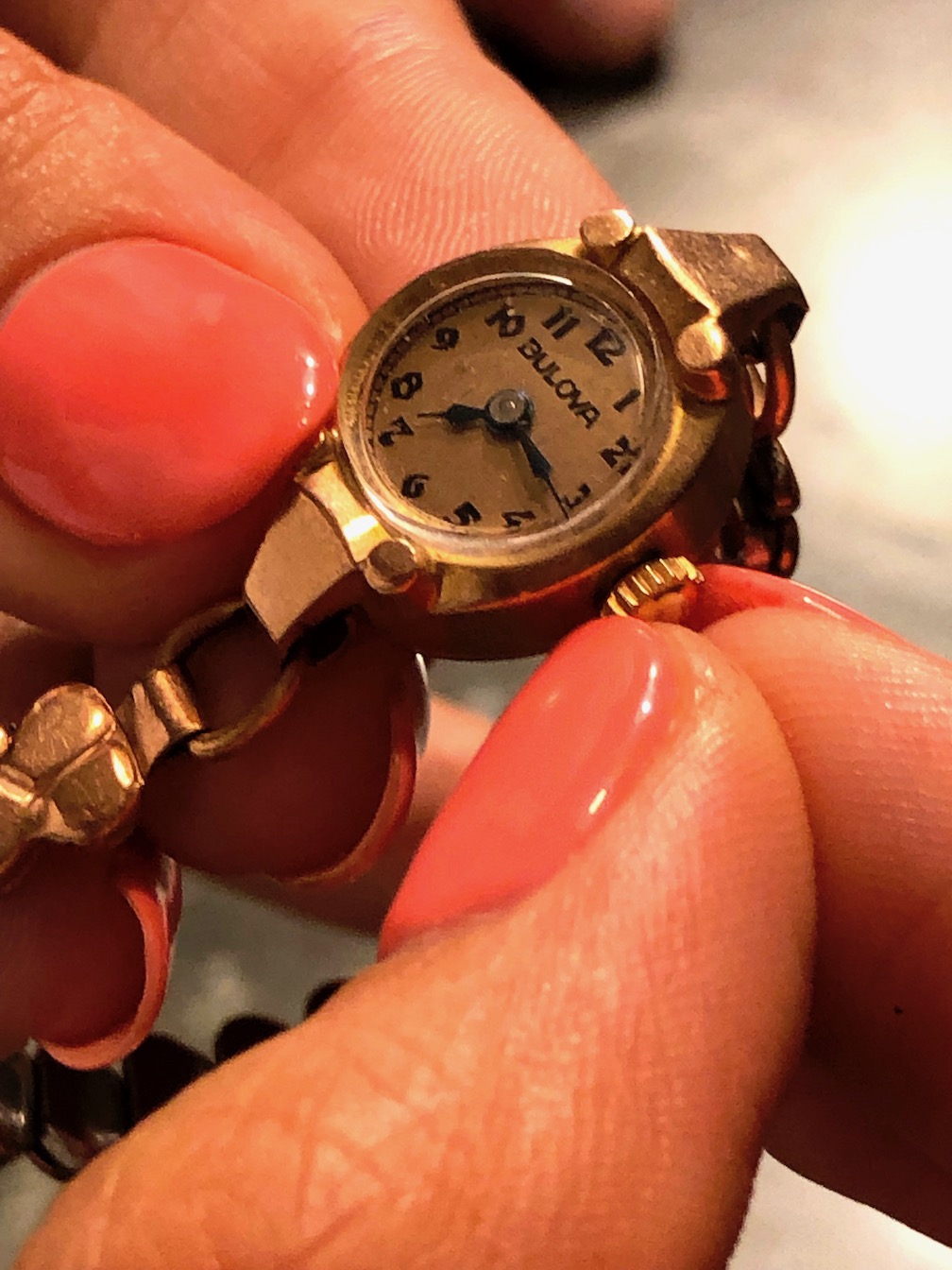 The tiny vintage Bulova watch is smaller than my thumbnail.

They sent it back to me and said the tooling had long since been destroyed and there was nothing they could do. The watch had personal and emotional connections for me so I put it aside and took it for granted that it was no longer operational. I think the watch was angry at me. “How dare you give up on me?” I think it said the first time I put it back in the jewelry box. I was young, only in my watch career for a decade or so by then and, let’s face it, we didn’t have the technology then that we have now.

But then, as I mentioned, I pulled that watch out of the box again a year or so ago, fully intending to bring it to Bulova and show it to them. When I had been writing that chapter, they had said they would love to see it, but I guess I forgot, and into the box it went again.

The Pedigree of my Vintage watch 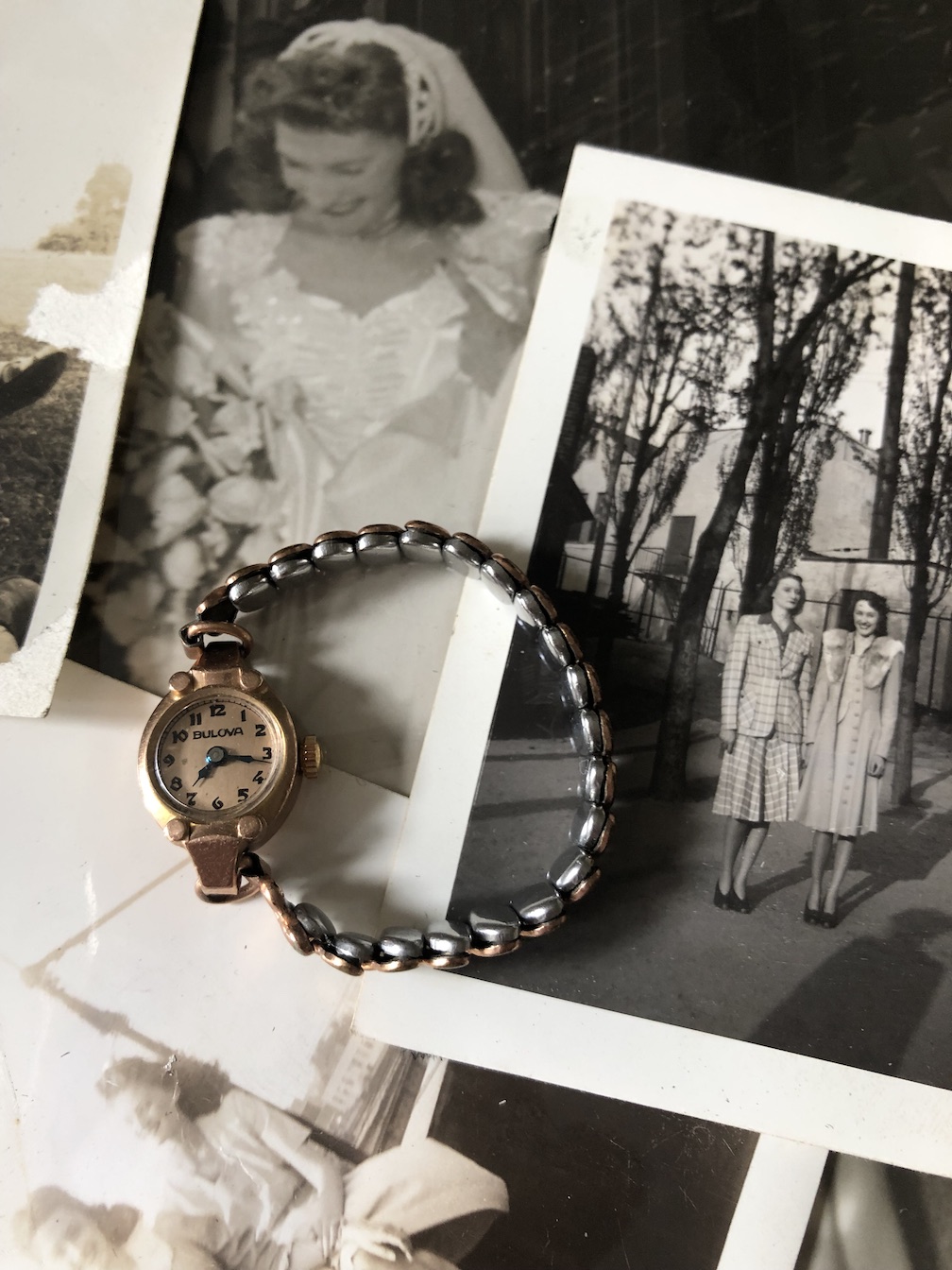 The pedigree of a vintage watch counts, especially if it has a personal attachment. (photo: R. Naas)

Still, the watch had belonged to my aunt, my mother’s sister. When I was a child, in the late 1960’s, I remember well that we would visit my aunt and uncle several nights a week. My father had died when I was just nine years old and my mom was lonely, I’m sure. My aunt had fabulous taste — like my mother — and always wore great jewelry. I remember seeing that watch on her wrist several times. Once I asked her about it and she told me that she had gotten it years before and it was her prized possession. She died when I was 12 years old. Somehow, years later, in the 1980’s, the watch made its way to me. It was small and not in style in the era of the big quartz watches so I just put it aside.

Throughout the past few decades, that watch has been like the proverbial penny — it keeps popping up. Only it is not a bad penny- it is a good memory — and I love that it keeps popping up. This time, when I found it again, I brought it to my office with me, sat it prominently on my cherry wood desk and stared at it. I wondered what secrets it had kept all the years my aunt wore it.

When A Vintage Watch Talks To You 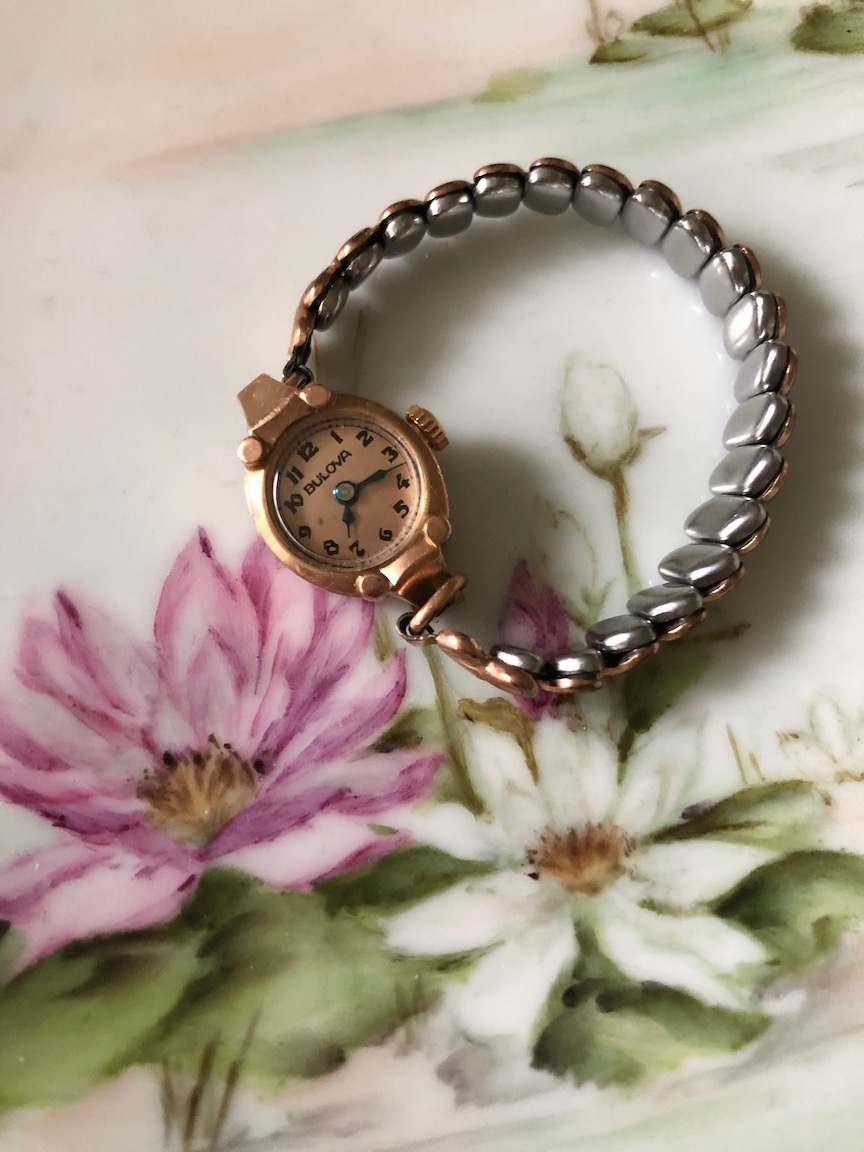 In my mind’s eye, I could see the watch on my aunt’s dresser on a hand-painted jewelry tray.

As I picked it up and studied it more closely, I imagined my aunt wearing it as she set her beautiful dining room table as  with fine china and silverware. I imagined her taking it off at night and putting it on her dresser on her hand-painted china jewelry tray. My aunt Myrtle had worked in New York at the Overseas Press Club, and I imagined her having a nice career working with the international journalists who worked at the organization. As I gazed more closely at the watch, I got a little lost.  I saw tiny dents in the 5N pink gold case and scratches on the bracelet.

“I got this dent on it as Myrtle was racing down the hallways to deliver a lead to one of the journalists,” the watch said to me, “she banged right into a big table and I got the brunt of it.”  Somehow, I could see the crowded office and I could see my beautiful aunt running down a narrow hallway and banging into that table with her beautiful watch. 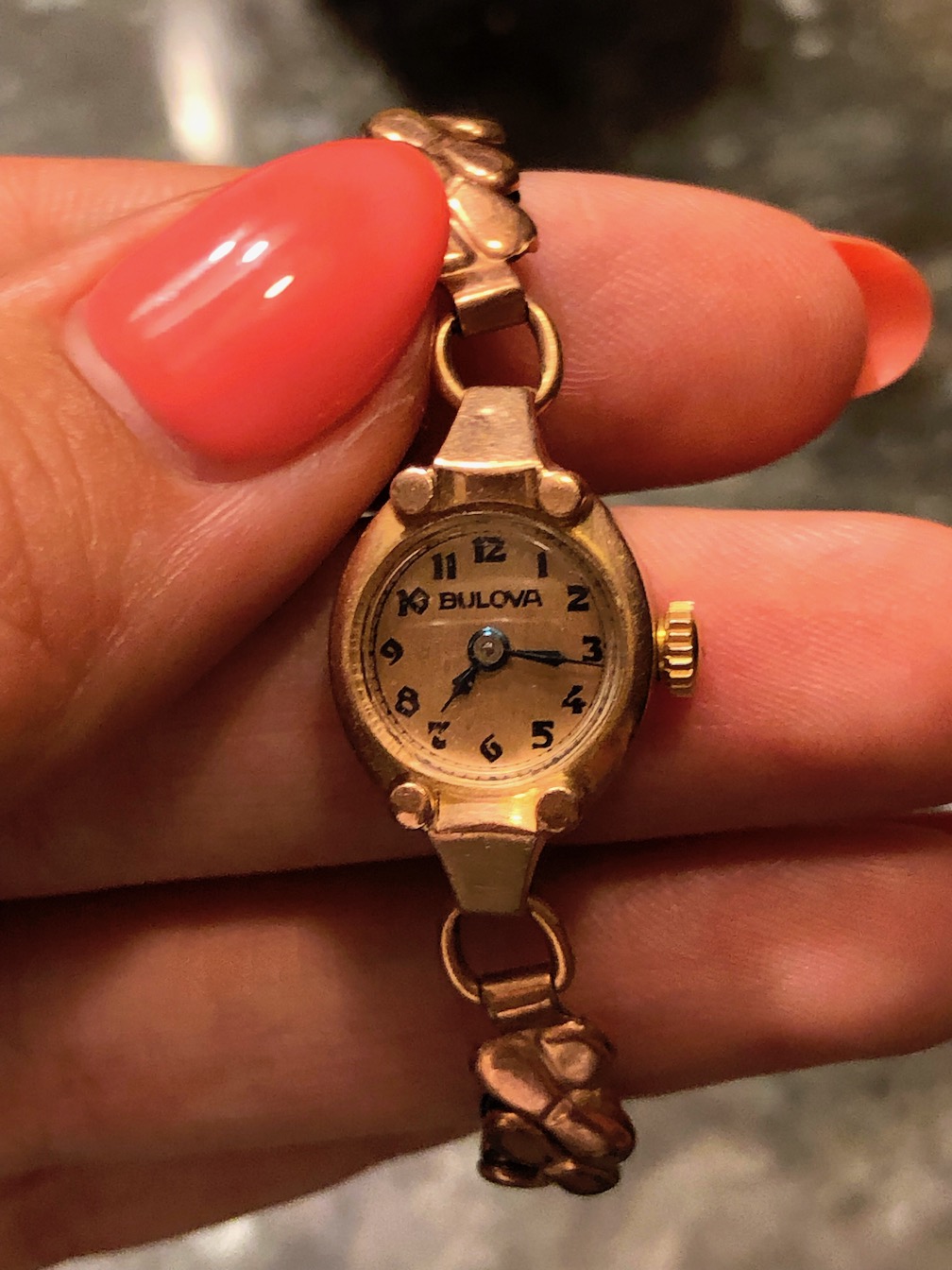 Every scratch in that vintage Bulova watch tells a story. (Photo: R. Naas)

“The scratches on my bracelet are from a time when she was helping your mother decorate the Christmas tree when you were a baby and it fell down on both of them, ornaments and all,” the watch seemed to say. “I didn’t mind though, because even though I was scratched, they laughed it off and I was happy that I played a role in all that fun.”

Was the watch mocking me? Was I imagining its stories. I don’t think so, but even if I was, it was a great flash back into my life. Suddenly, I really liked this watch better than ever. It seemed to be calling to me now,   “I’m not that small. Come on, put me on your wrist. You won’t be able to resist my charm.” 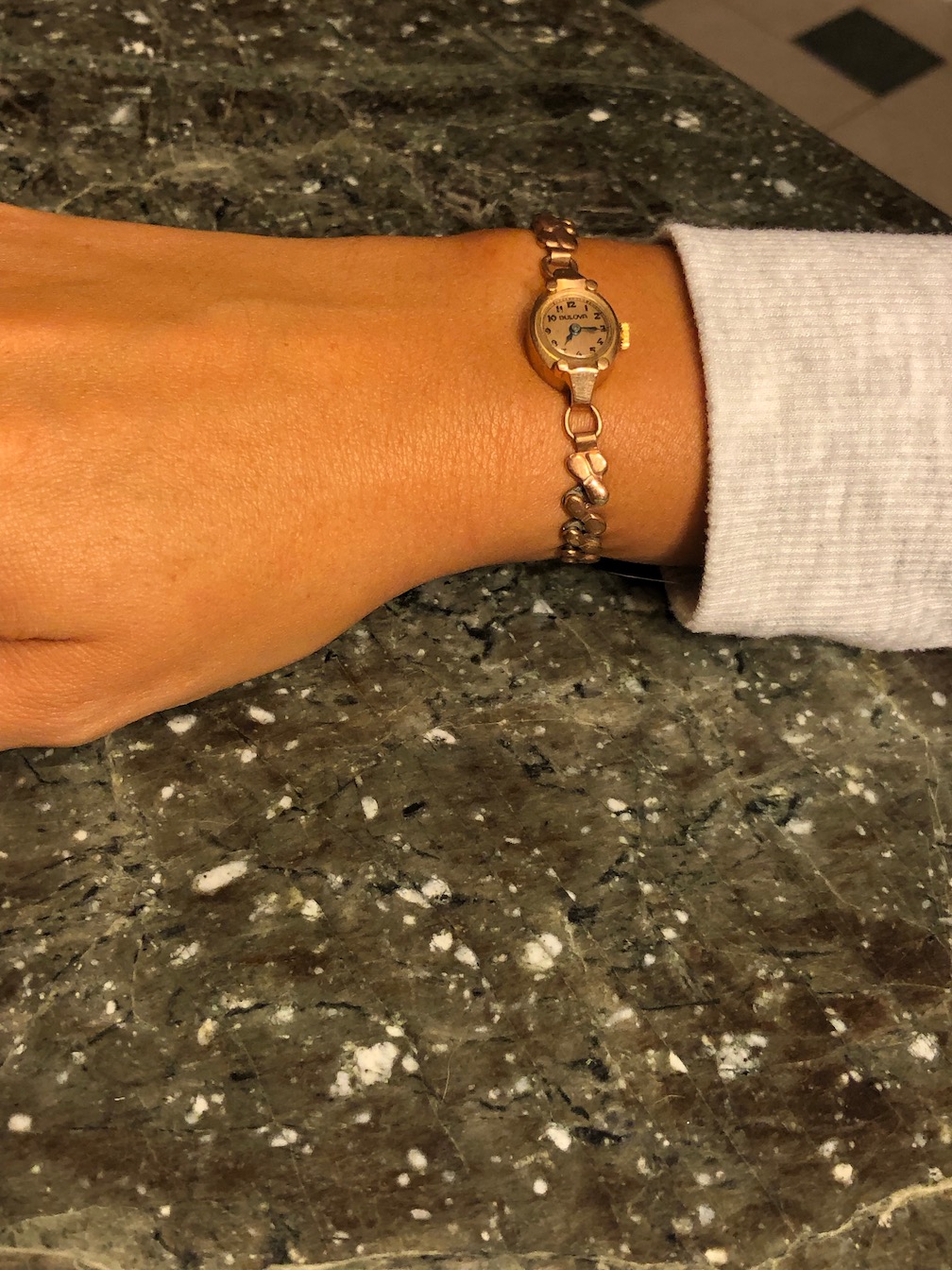 Wearing a vintage Bulova watch can be so gratifying.

My aunt must have had tiny wrists, because getting the watch on was not so easy. Additionally, the tiny dial isn’t easy to read. What was easy, though,  was falling in love with the provenance of my historic watch.

With the stories in my head, and the watch now in the forefront of my mind, it is time to get the mechanics inside to work again. I’m not sure if it is possible, but if you want to restore a vintage watch, you need to go directly to the source. I’ll be contacting Bulova New York again, and this time I’ll be hoping that thanks to all of the nano-technology in the watch world, and the ability for brands to create replicas of  tools that have long been lost or forgotten, my watch may make it back to my wrist to begin another chapter of its journey. Of course I will most likely need a magnifying glass to read the time. But you can bet that this time I won’t put it away and forget it. Who knows, one day it may have stories to tell my daughter. 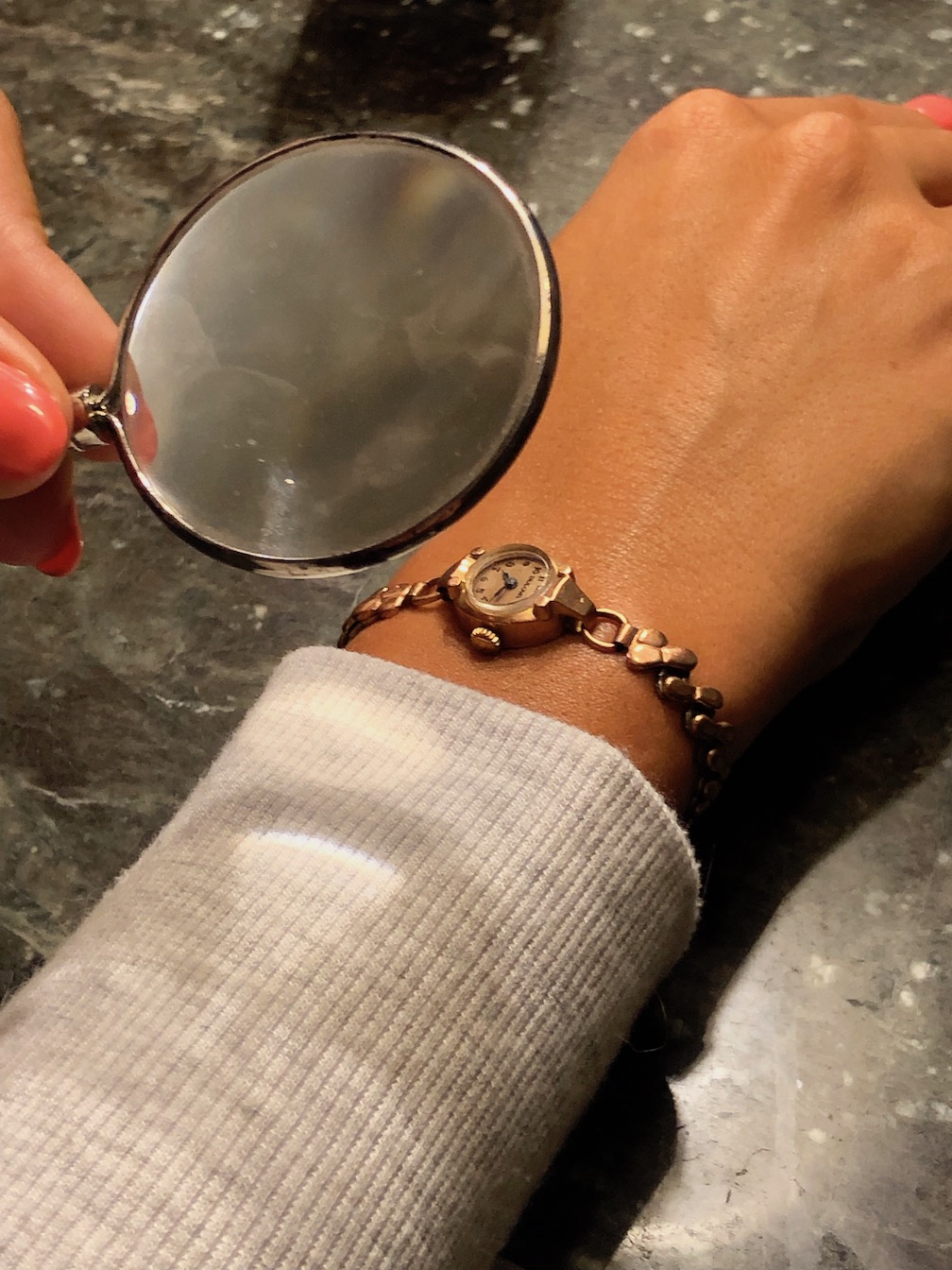 I may need a magnifying glass to read the time, but I think it would be so worth it.