Hermès Dials It Up A Notch With Arceau Canadian Wild Watches 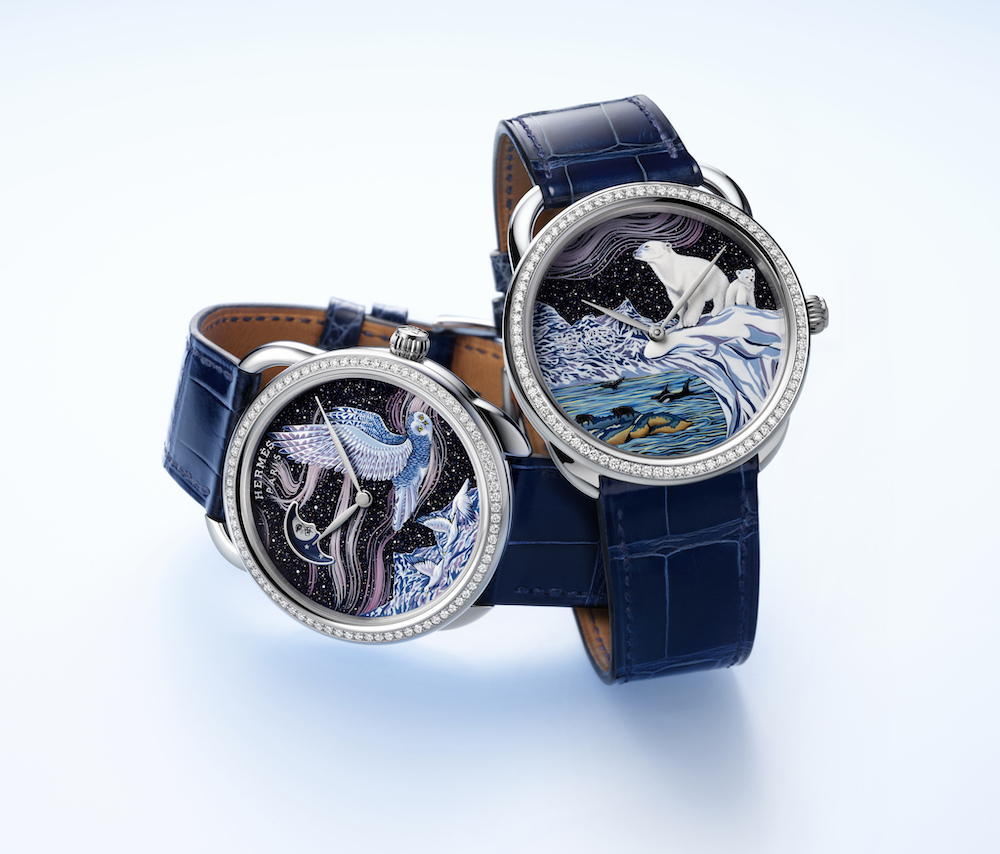 When most people think of Hermès, they think about scarves or leathergoods — then maybe watches. The truth is, Hermès watches are taking the watch collecting world by storm thanks to their complexity and beauty. Since the brand began building watches almost a century ago, it has come a long way with so many new timepieces that are definitely piquing interest. Of particular note are the spectacular Arceau “Into the Canadian Wild” watches that are making their way to market this fall in very limited numbers.

How Hermès Makes Its  Watch Dials

Hermès is a master at creating unique and beautiful dials. It owns one of the best dial makers in Switzerland: Natéber, located in the heart of the watchmaking region of La Chaux-de-Fonds. This company has been crafting dials – the outer expression of the watch — for 45 years and are experts at it. Every dial is handled with care along its journey – where dozens of pairs of hands will work on it. 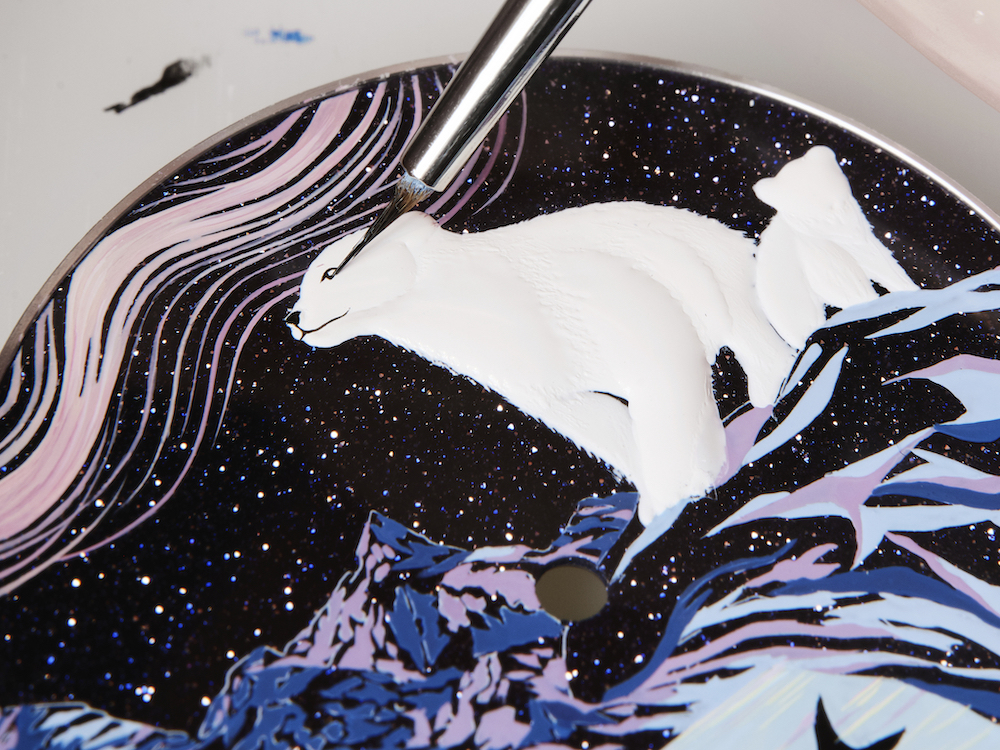 Every Hermès watch dial goes through 60 different steps from raw metal to finished piece. An artisan that works with special tools, the dial maker understands the intricacies of brass, gold, mother of pearl and precious stones. He or she knows how the material will react to being cut, drilled, engraved, painted or polished.

The Watch Dial Being Made

The making of a dial starts with the raw material being cut. It then journeys to a series of at least seven other departments that range from polishing, galvanic plating or varnishing to achieve the color, engraving or engine turning to achieve a sunray or other pattern, gem setting for dials with diamond markers or accents and more. The majority of this work is all done by hand (except for the galvanic washes). 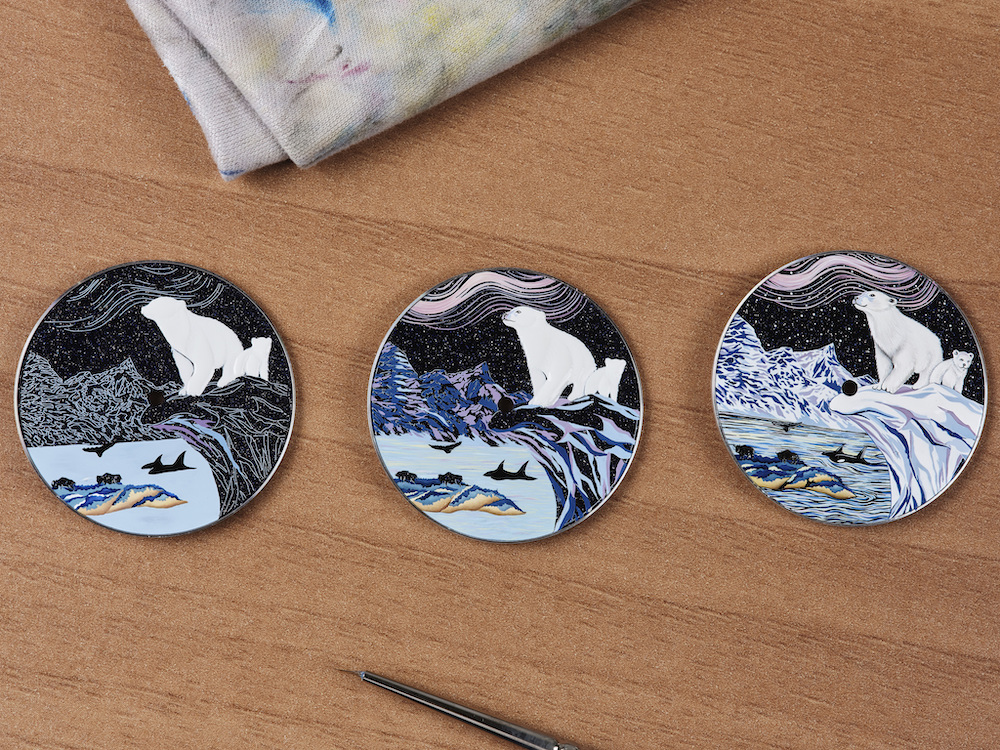 Hermes Arceau Into the Canadian Wild watches are hand painted and fired in successive modes. It takes more than a week to finish a single dial. (Photo: David Marchon)

Hour numbers or markers are a special part of each dial. Generally, markers or numbers are either transferred onto the dial with a very precise inking process, or, if they are raised numbers or markers, they are hand applied and fixed to the dial with tiny feet that slip into a pre-drilled space on the dial.  Lastly, the hands are put in to place by hand. Knowing the process a watch dial goes through enhances its beauty and craftsmanship, as wells the value of the watch as a whole. 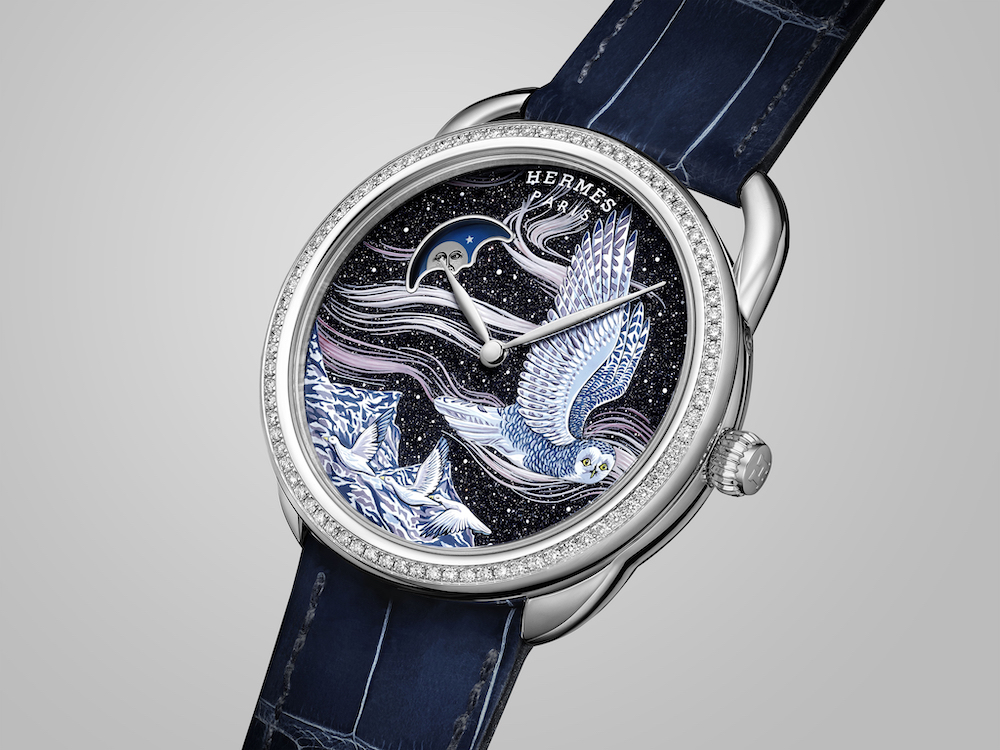 The newest Hermès Arceau Into the Canadian Wild. Each version will be limited to 24 and draws inspiration from a scarf designed by Alice Shirley in 2017 for the brand’s 150th anniversary. Featuring miniature paintings on an aventurine dial, each dial takes over a week to complete and because each is individually hand painted, each is unique. The different volumes of the landscapes and animals are formed via the successive layers of paint,  alternating with successive firings.

Each dial is set into an elegant white gold case set with 82 diamonds, and the watch is finished with a sapphire blue alligator strap, also made by the Hermès Horloger artisans. The Polar Bear version (which should retail for about $56,100) is a mesmerizing masterpiece. The Snowy Owl version against a backdrop of the Northern Lights will retail for more than the Polar Bear because of its complexity. Both are powered by different mechanical self-winding movements.