Very few watch brands – perhaps fewer than a handful – have the ability to offer the universe on the wrist. Sure, some offer the world, a globe, multi-hemispheres, the stars and even complete constellations – but just the upper echelon can bring an actual mechanical planetarium to the wrist. Van Cleef & Arpels is one such brand, and this year the Maison unveils the Lady Arpels Planetarium Poetic Complication for the wrist.

Falling into the brand’s Poetry of Time Series, and more specifically in the   Poetic Complications and Poetic Astronomy lines, the 38mm watch is a mesmerizing masterpiece, a combination of art, elegance and sublime technology. Using alluring aventurine glass rings and precious stone disks, this watch depicts Mercury, Venus and Earth as they rotate around the sun in real time.

Planetarium of the Past

This is not Van Cleef & Arpel’s first dance with the planets. Back in 2008, the brand unveiled its Extraordinary Dials™ collection, wherein exquisite interpretations of our universe would live, and then several years later, in 2014, it released the much-acclaimed Midnight Planetarium watch within that series. You can read all about that 44mm watch here.

For that creation, Van Cleef & Arpels turned to master astronomical watchmaker, Christiaan van der Klaauw. Because this ladies watch is 8 mm smaller in diameter than its older sibling, a new movement and module were a necessity. Naturally, the brand once again sought van der Klaauw’s creative genius in the making of this new watch. Using a Val Fleurier automatic base, van der Klaauw worked his magic developing an exclusive module for this women’s wonder.

Solving the Challenges of Planets on the Wrist

With a reduced diameter, the focus for the Van Cleef & Arpels Lady Arpels Planetarium watch was clearly on sophisticated elegance without clutter. The issue: how to interpret the moving planets on a smaller dial and sill make a visual impact. The solution: fewer planets installed on separate midnight-blue aventurine rings in concentric circles.

In the center of the watch is a pink gold sun, which is surrounded by the three closest planets that actually rotate in real time. Closest to the sun is Mercury, depicted using a pale pink mother-of-pearl orb, and rotating around the sun on the dial every 88 days. On the next ring sits Venus in green enamel, which rotates around the center sun every 224 days. Finally, Earth, represented in turquoise revolves around the dial duringa 365-day span. The Earth also has its moon depicted as a diamond orb. The moon rotates around Earth in real time, as well, so every 29.5 days.

Because the planets move in real time, the wearer does not necessarily see any visible planet movement except after a good number of days have passed. It is almost a surreal encounter with time on the wrist.

One might ask, though, how do we tell the time on this watch? After all, let us not forget that this romantic interlude with the sky is also a real watch that must show time in our everyday world.   Essentially, the shooting star indicates both the hours and the minutes The star shows the hours and then between each hour marker are dots tht indicate 15-minute segments. The tail of the shooting star indicates the elapsed minutes (give or take a few).

The Van Cleef & Arpels Lady Arpels Planetarium watch features as diamond-set white gold bezel and diamond-set case. Turn the watch over, and the back features a rotor with the turquoise Earth on it and a diamond-set crescent moon. A grand amalgam of master craftsmanship from lapidaries, gemsetters, enamellers and watchmakers, the Lady Arpels Planetarium watch is offered with a midnight blue and glitter alligator strap to match the dial. For those who want to shimmer as brightly as all of the night stars, a white-gold bracelet entirely set with diamonds is also available. 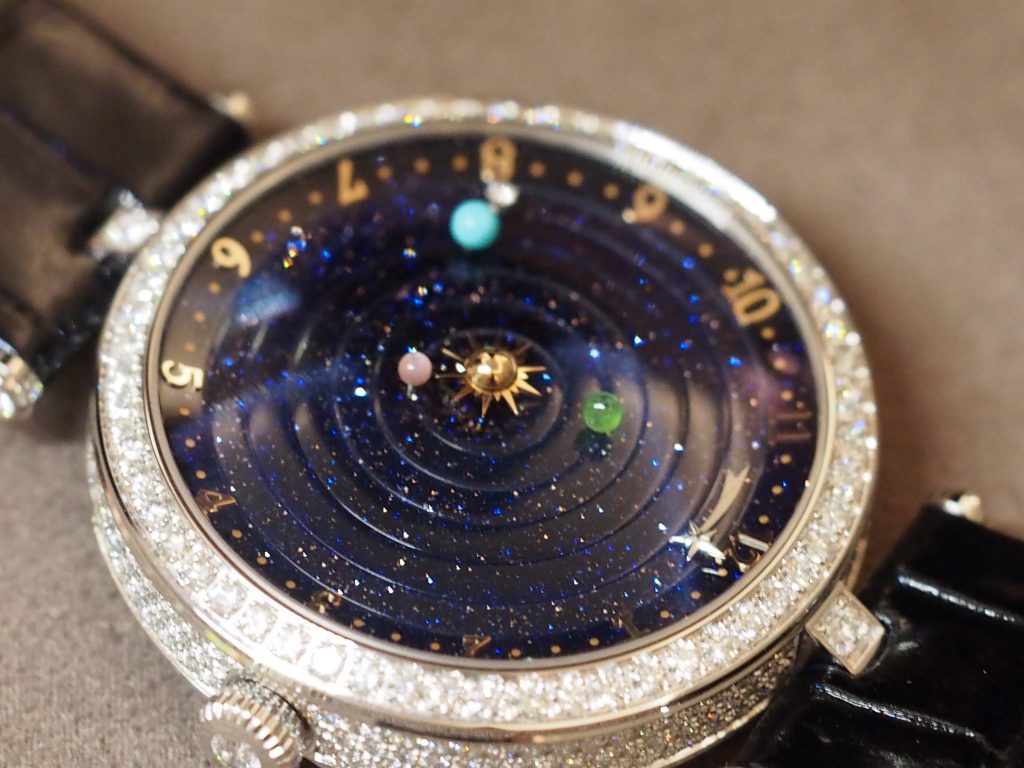 The case and bezel of the Van Cleef & Arpels Lady Arpels Planetarium watch is set with diamonds.

Going hands on with this watch was an emotional high for me. I’m not going to lie, I was wowed four years ago when Van Cleef & Arpels unveiled the Midnight Planetarium and the Lady Arpels Zodiac collection (admittedly, the Zodiac series paled by comparison at that point in time due to the complexity of the bigger introduction).   One might ask: Why – when the Midnight Planetarium with its eight planets was so impressive – does the new Lady Arpels Planetarium thrill me.

The answer here is simple. This was not just a scaled down version of big brother. This watch took careful planning. Van der Klaauw had to create an all-new module for the new movement base, and had to offer a moonphase indication (the Midnight Planetarium did not have that function), as well as a 12 hour dial and calendar functions on the back.

Additionally, the watch is a moving, functional planetarium. It depicts passage of time in real time that almost eerily reflects how fast time passes us by in real life. One moment, the Earth is in one place on the dial. Three months later, one can see a clearly visible passage of time – but somehow those three months sped by. To me, the watch is not just a statement about the celestial world, but also about the reality of time. 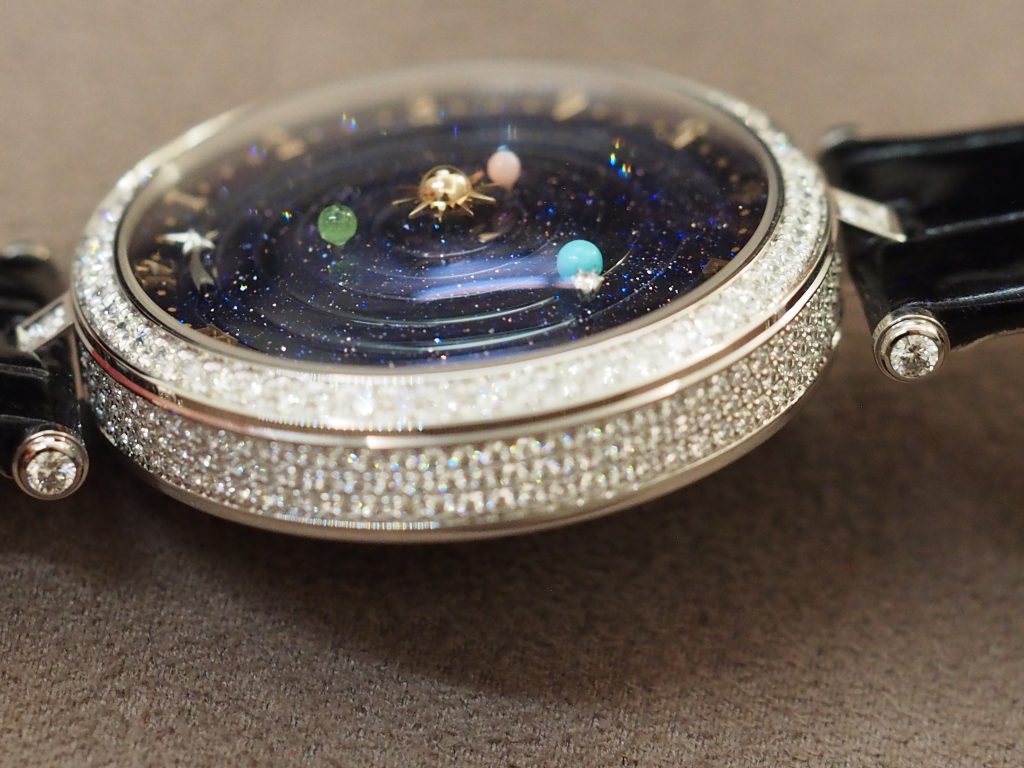