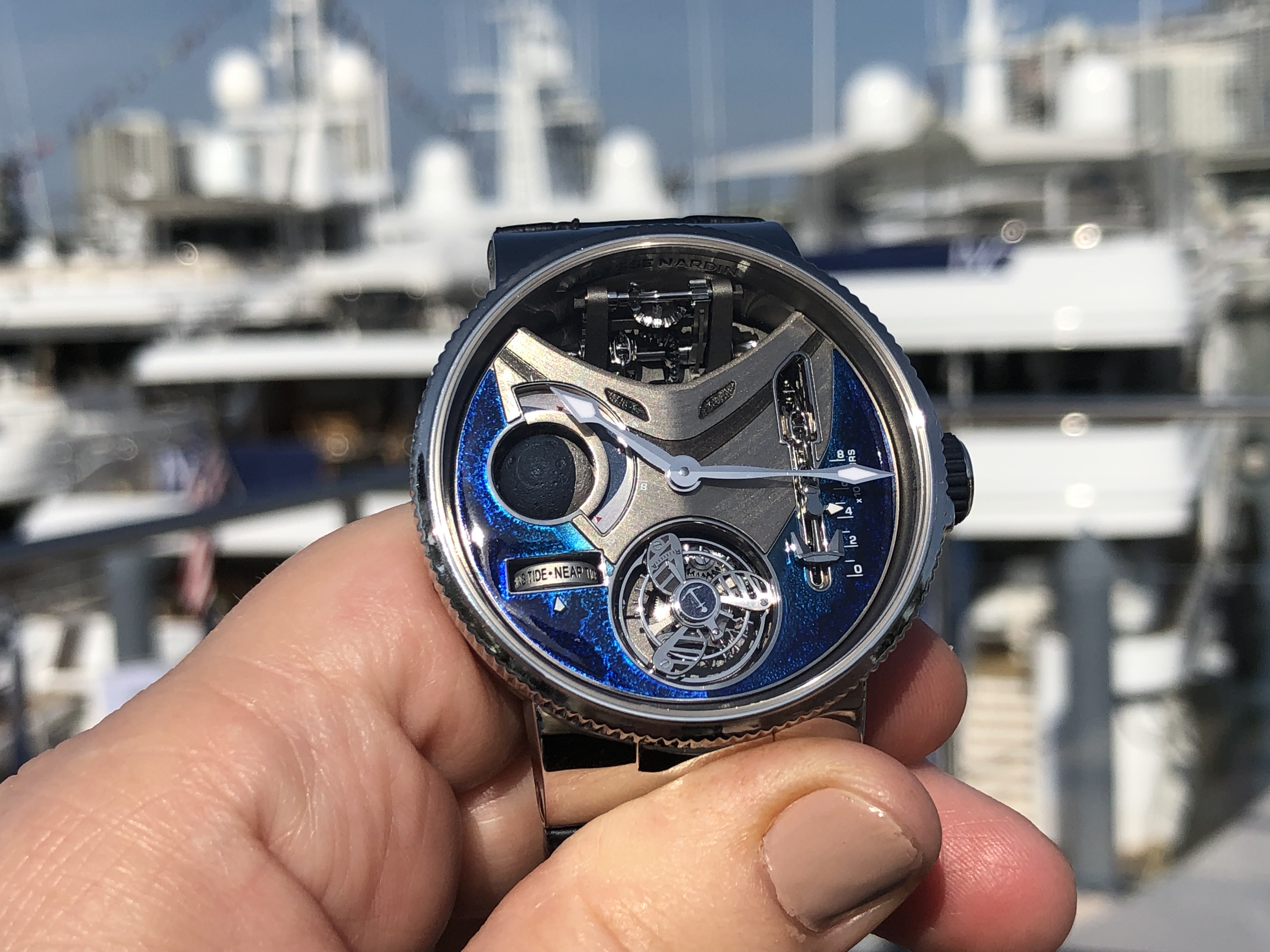 Last week in Miami – at the second annual Watches  & Wonders show — Ulysse Nardin used the Florida backdrop, complete with concurrent Yacht Show and car show — to unveil its newest masterpiece: The Marine Mega Yacht watch that indicates tides, along with a host of other important information for sailors, and that carries a retail price of about $310,000. 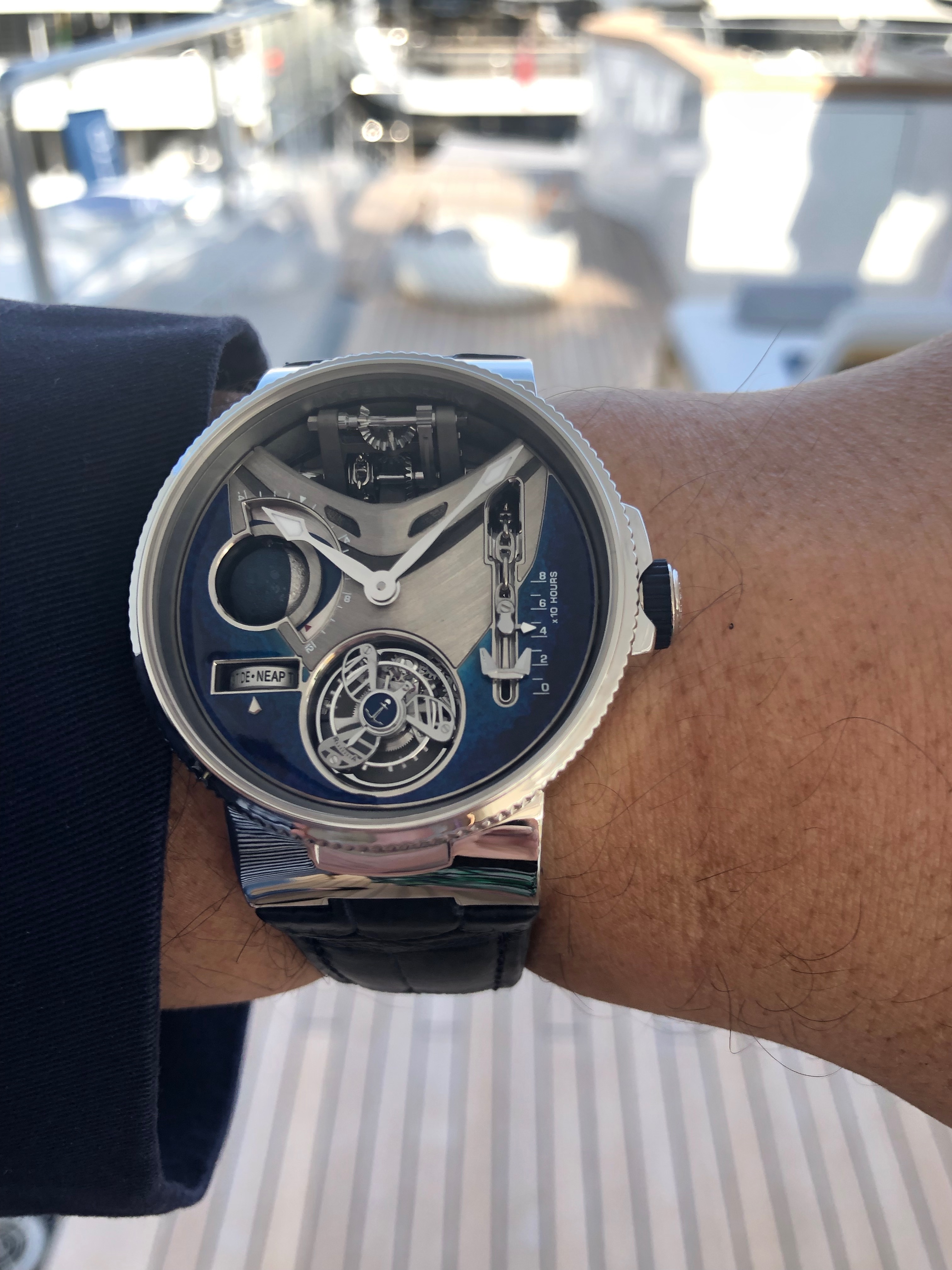 I wrote extensively about the watch last week on my Perfect Timing column on Forbes, but here we go hands on with this dreamy, complex work of art and mechanics. The watch features a patent-pending complicated new movement.

“Essentially, the UN-631 caliber is chocked with 504 components and offers such functions as a one-minute flying tourbillon at 6:00 on teh dial (complete with a propeller motif) that compensates for errors in timekeeping due to the effects of gravity (and which is constantly and mesmerizingly in motion), moon phase indication, tidal indication and coefficients and a power reserve system with 80 hours of reserve. 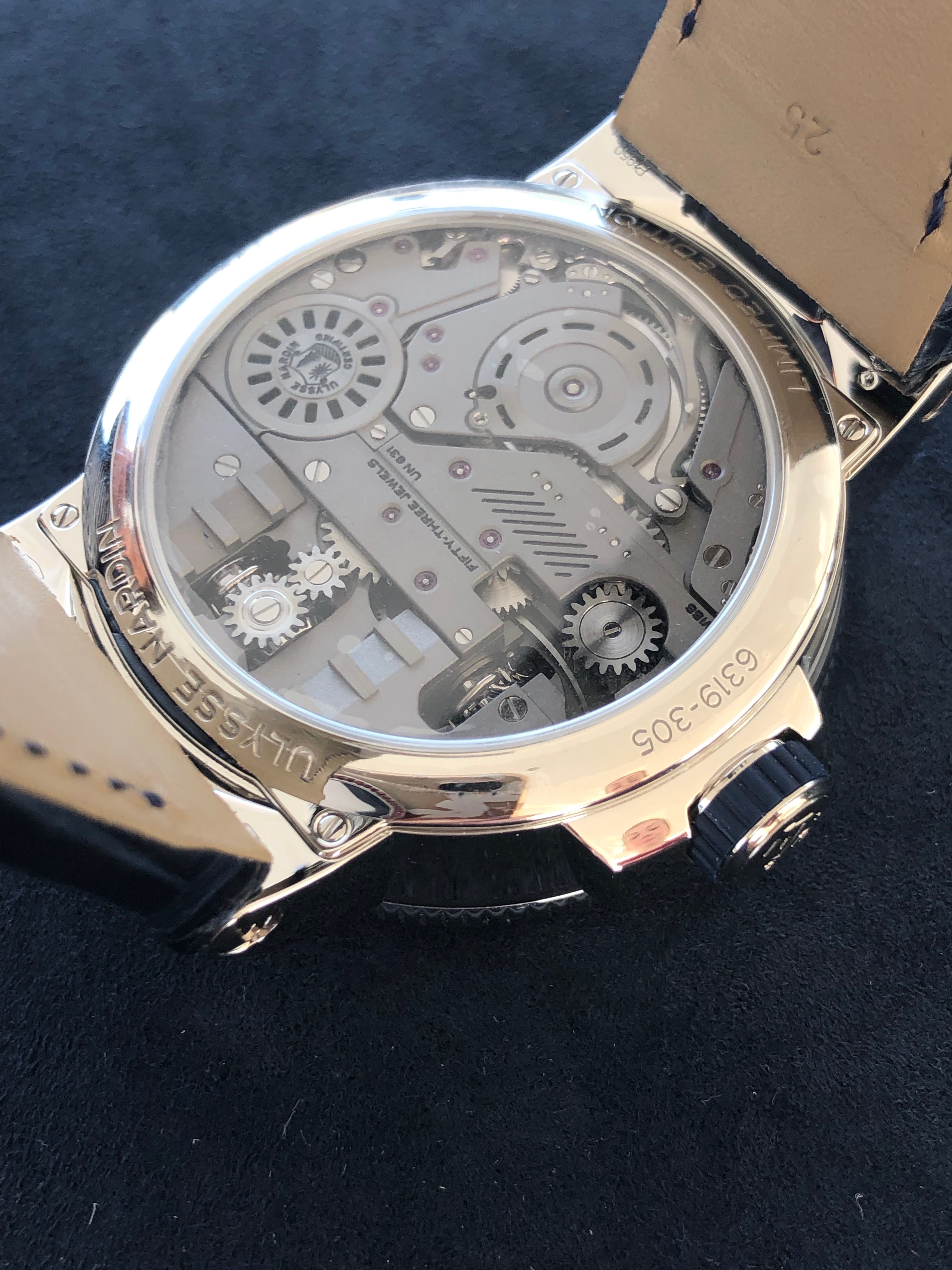 With the needs of yacht owners in mind, Ulysse Nardin’s master watchmakers, alongside watchmakers from Swiss independent brand Christophe Claret (renowned as a master in complications), have created the three-dimensinal movement – visible via a sapphire crystal case back — in the likeness of a ship’s engines. They have also reconfigured the tidal indications (for a location the wearer sets via the crown) and introduced a revolutionary new display of  information. 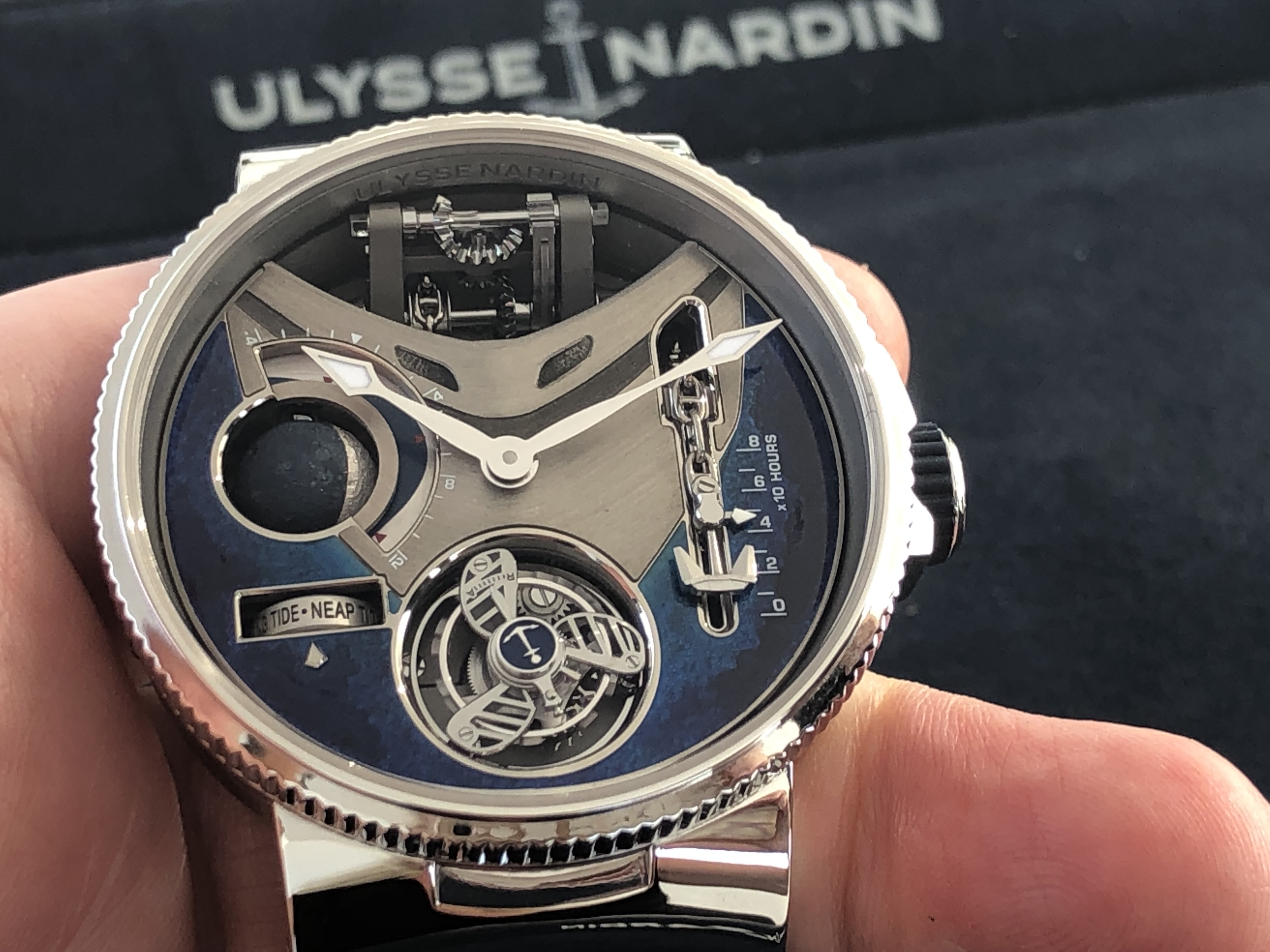 A close up look at the dial of the Ulysse Nardin Marine Mega Yacht watch. (Photo: R. Naas)

On the dial side of the watch, a mechanism displays the height of the tides, as well as indicating the seasonal coefficients as they relate to the place the wearer selects. To display the power reserve,  there is a unique pully-and-chain system (this is the patent-pending system) wherein the anchor (in plowshare likeness) is linked to the chain by an anchor ring and as the watch is wound, the anchor chain moves accordingly to indicate the accurate power reserve at 3:00 on the dial. For aesthetics and allure, Ulysse Nardin has created a miniature windlass that is visible at 12:00 on the dial and that turns to raise the anchor. 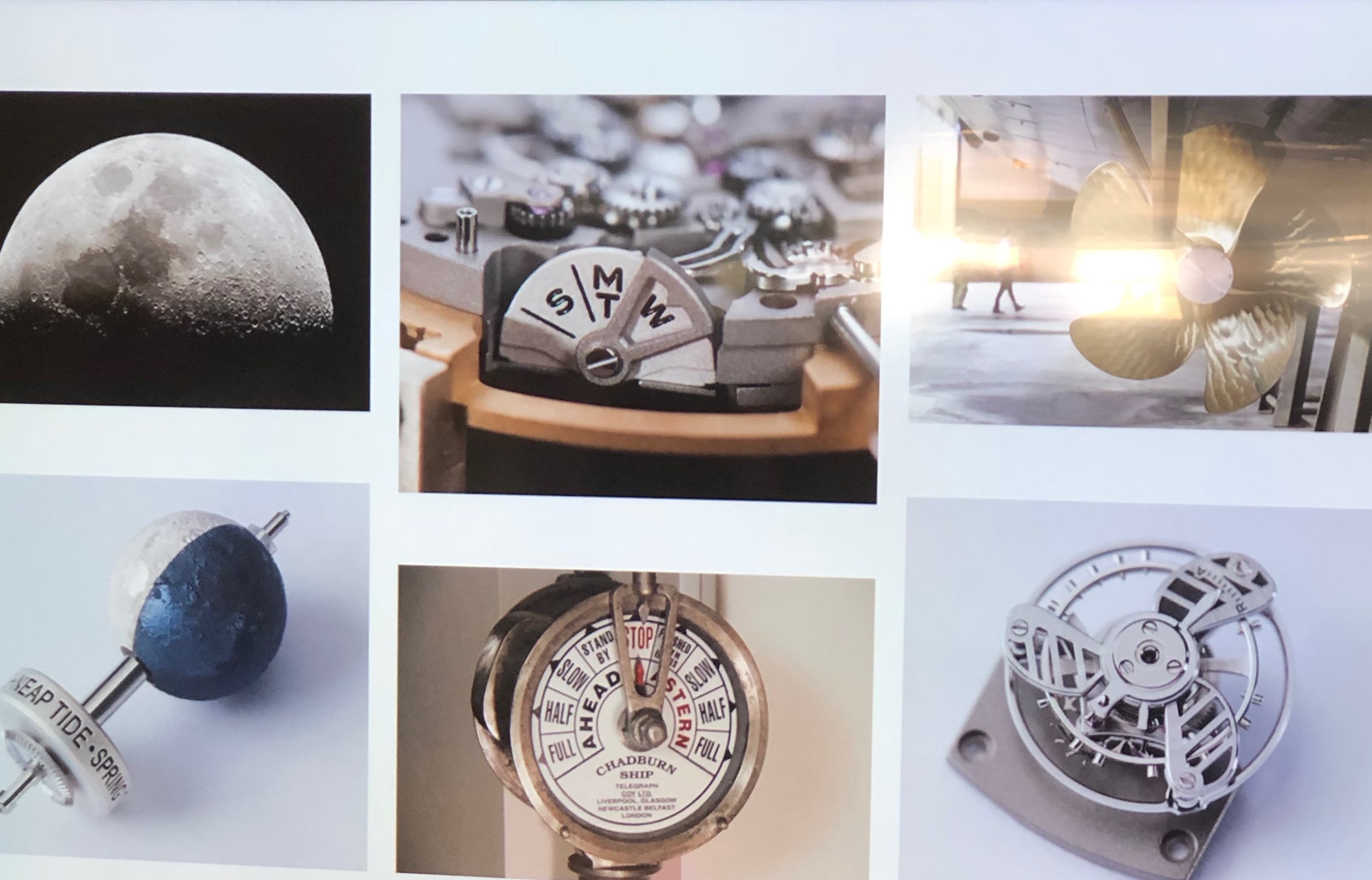 Additionally, there is a 3D moon globe at 9:00 that displays the phases of the moon.  The surface of the moon orb is engraved with a replica of the moon’s surface. The orb consists of two halves, one in blue PVD to indicate the new moon and one in rhodium. The ingenious watch has an aperture on the case side that indicates the position of the crown: S- set the nads; TM – tide and moon position; W- winding. Designed for today’s mega-yacht owners, the alluring 44mm Marine Mega Yacht watch is crafted in platinum with a stunning blue Grand Feu enamel also on the dial.  Just 30 pieces will be built. 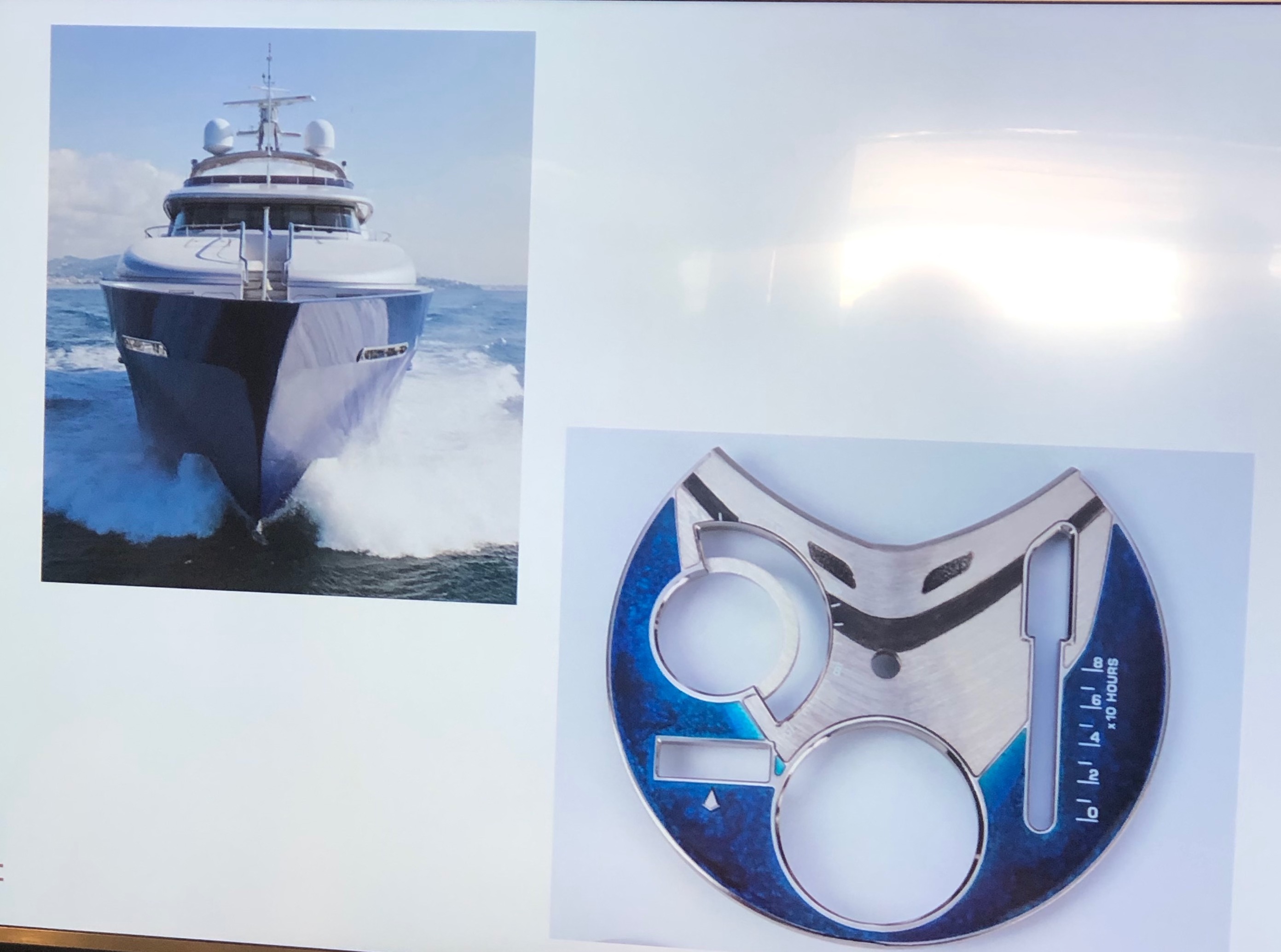 For Ulysse Nardin, whose nearly 175-year history is inextricably tied to the marine world (as the brand was creating marine chronometers since its founding in 1846), this new watch makes perfect sense. Ulysse Nardin is a vertically integrated complete watchmaking Manufacture that has built several  pillar collections around the water, including its Marine line and Diver line of watches. This watch is a new piece that follows on the heels of the very complicated Marine Grand Deck Tourbillon that the brand unveiled four years ago and that is still highly sought after by collectors. 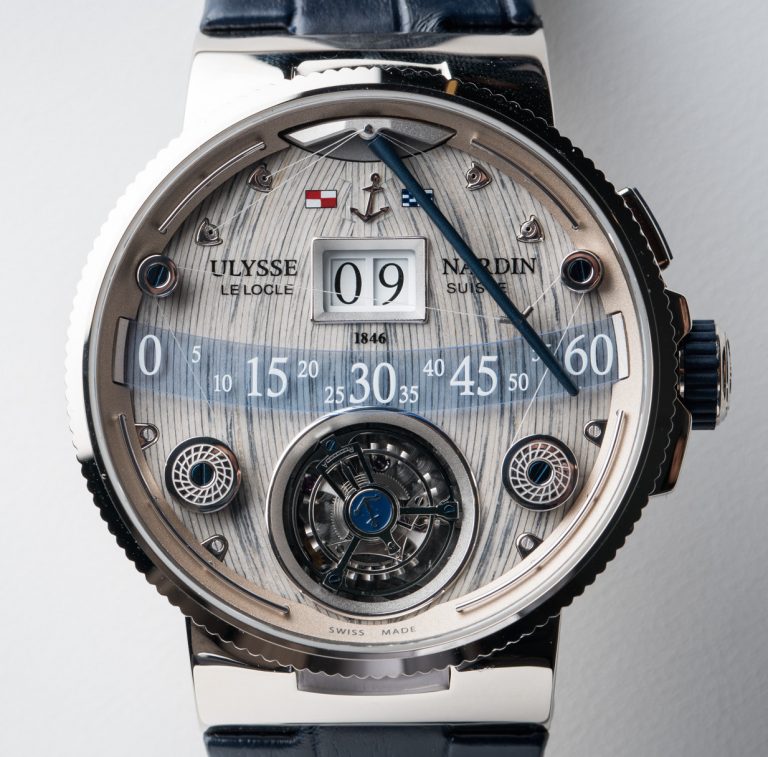