Hands On With The Half-Million-Dollar Greubel Forsey GMT Sport 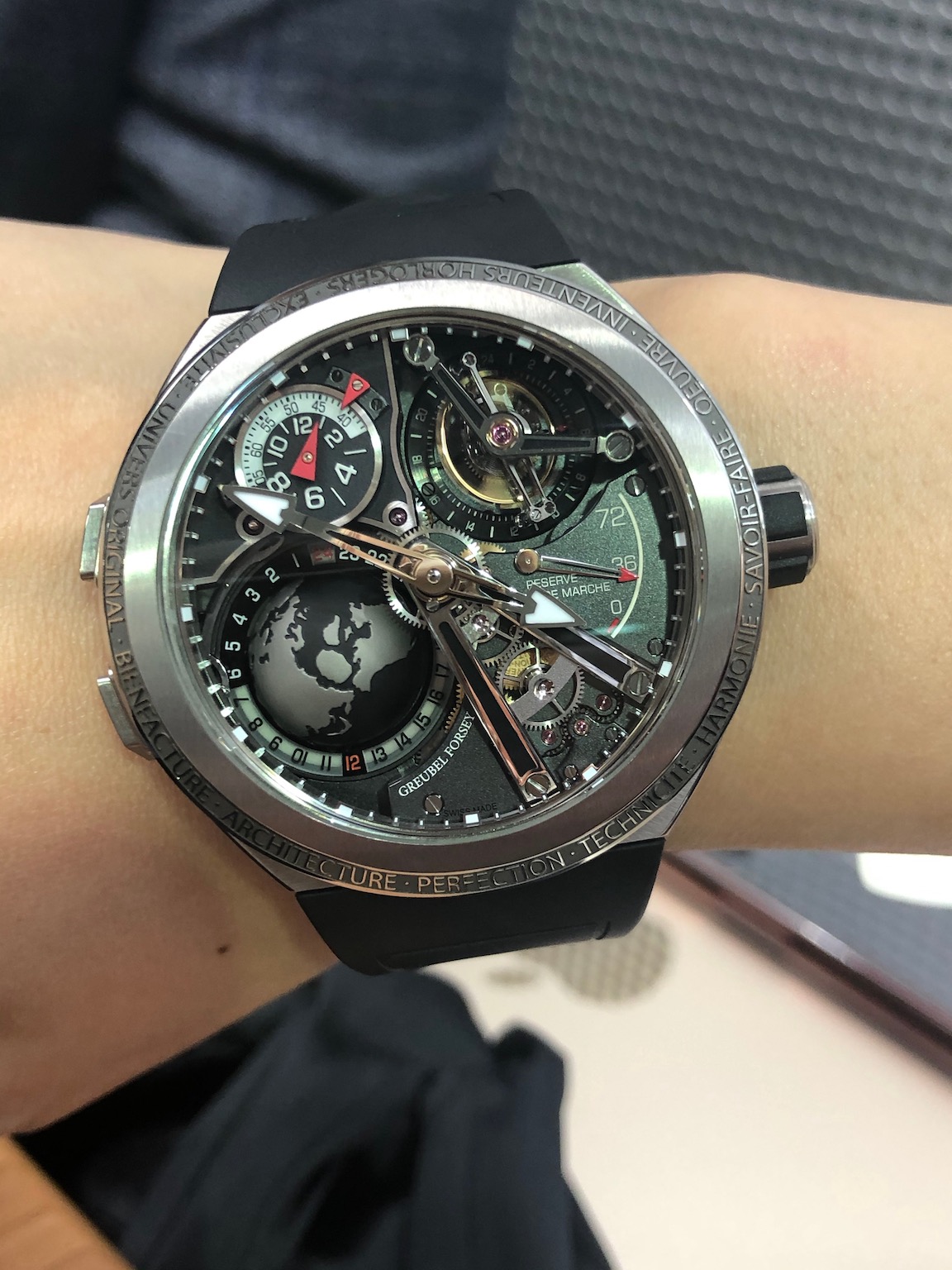 When I got my first hands-on look at the new Greubel Forsey GMT Sport watch during the recent Dubai Watch Week in November, my jaw dropped. It was everything I would expect from this king of independent watch brands — and more.

Created in a limited edition of just 11 pieces, this bold sport watch is all about technical prowess, architecture and chronometric precision. Oh, wait, that’s what all Greubel Forsey watches are about, right? Well then this one — with four patents — goes to new levels. Designed as the brand’s first “sport” watch, it is a watch anyone would wear day, night, weekend and beyond — if you have $480,000 to spend. I  don’t. So to make up for that, I spent a lot of extra time handling this beauty.

A Quick Tour Of The Greubel Forsey GMT Sport 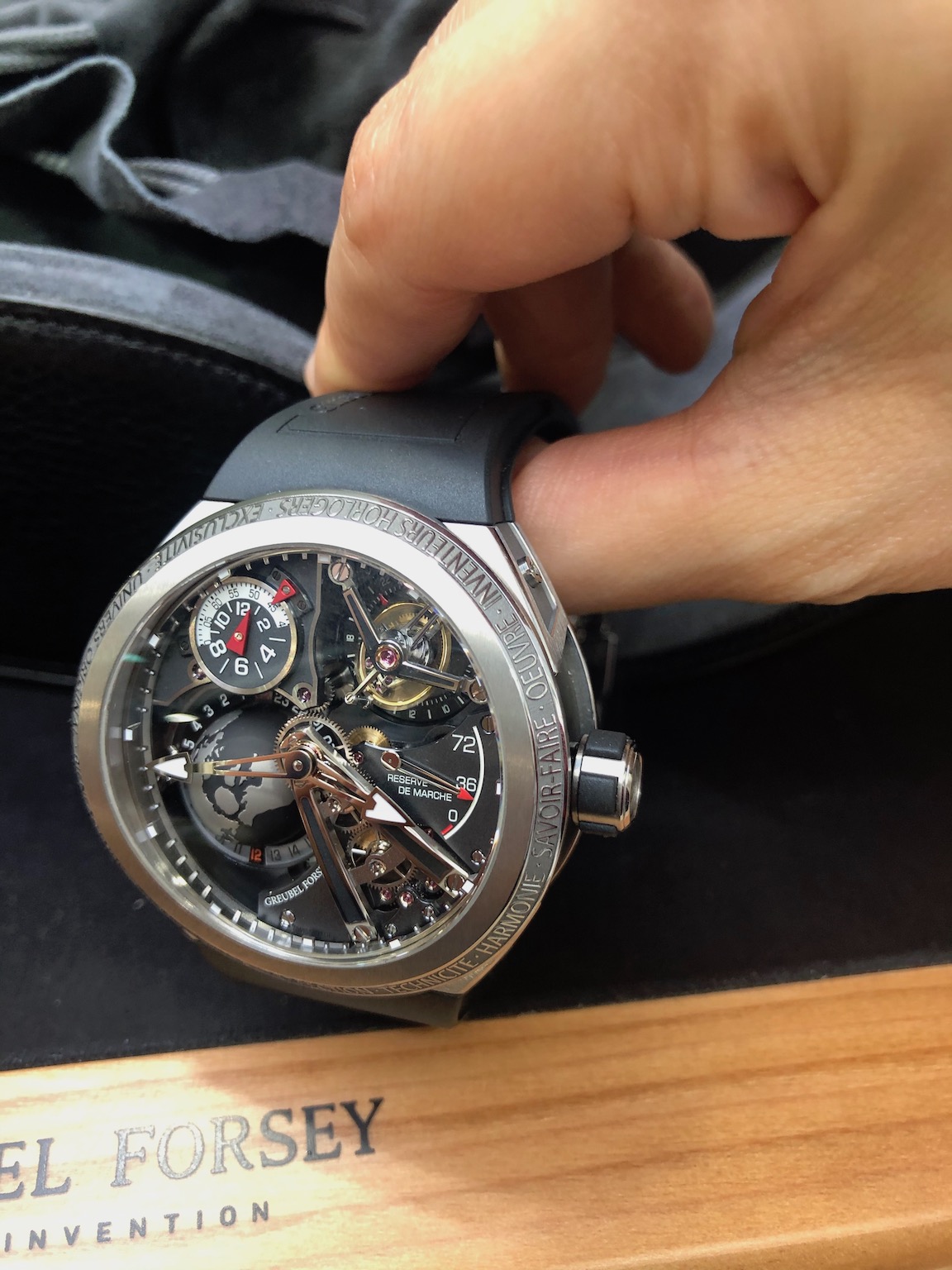 The entire architecture of the Greubel Forsey GMT Sport watch — inside and outside — is multi-dimensional and incredibly alluring. It boasts an arched suspended bridge for the hour and minute hands, a black-on-black ocean globe and a round-to-oval case structure.

To begin with, the 45mm titanium GMT Sport watch has four patents for both its complex all-new, 435-part hand-wound movement and for the ergonomic round-to-oval curved case and integrated strap design. Inspired by the brand’s original GMT Black (2015), this watch boasts a host of nuances. Water resistant to 100 meters, it also offers dozens of functions and indications.

In a private interview with Stephen Forsey during Dubai Watch Week, he indicated that the movement, which was four years in the research and development stages, gave the brand an opportunity to experiment with new ways to display the GMT and the globe.

“We still had to make it look like the brand because we are not taking a curve toward sport watches, but wanted to offer an option of a watch wearable in the water to our customers who want that.” 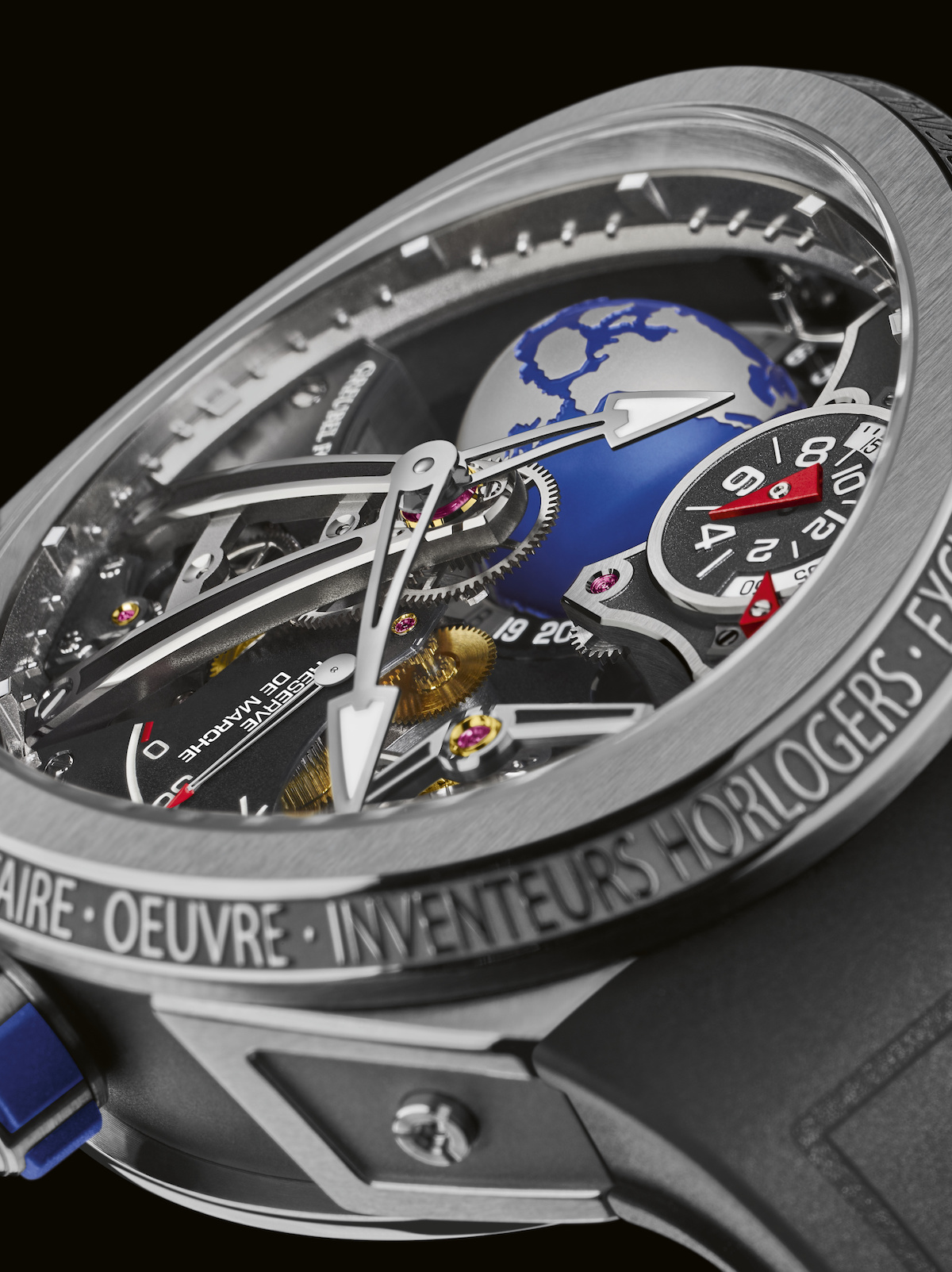 There is also the choice of the Greubel Forsey GMT Sport watch with a blue and silver globe, as seen here. The brand’s guiding principles of innovation, technology, precision and perfection are engraved on the case .

Among the stand-out features of the watch: a suspended arched bridge for the hours and minutes display that curves up over the movement on the dial side; the titanium round case with high curves that elongate into an oval, the large case back that enables a larger indication of the 24 city time zones on it and the engraved bezel with the brand’s ethos on it: architecture, perfection, and more.

“The movement was constructed from scratch – from the suspended arched bridge for the hours and minutes display, to the unique showcase of the Tourbillon 24 Secondes and the universal time display with three dimensional globe.”

Among the displays and functions:  GMT, second time zone, rotating terrestial globe with universal time and day-and-night in 24 zones, summer and winter time indications (as well as cities observing summer time) in those zones, Tourbillon 24 Secondes watch — meaning the tourbillon escapement rotates once every 24 seconds instead of every 60 seconds like most tourbillon cages, and more. The newest interpretation features a black-on-black oceans display on the moving globe. According to Forsey, it is the first time the brand offers this color finishing. 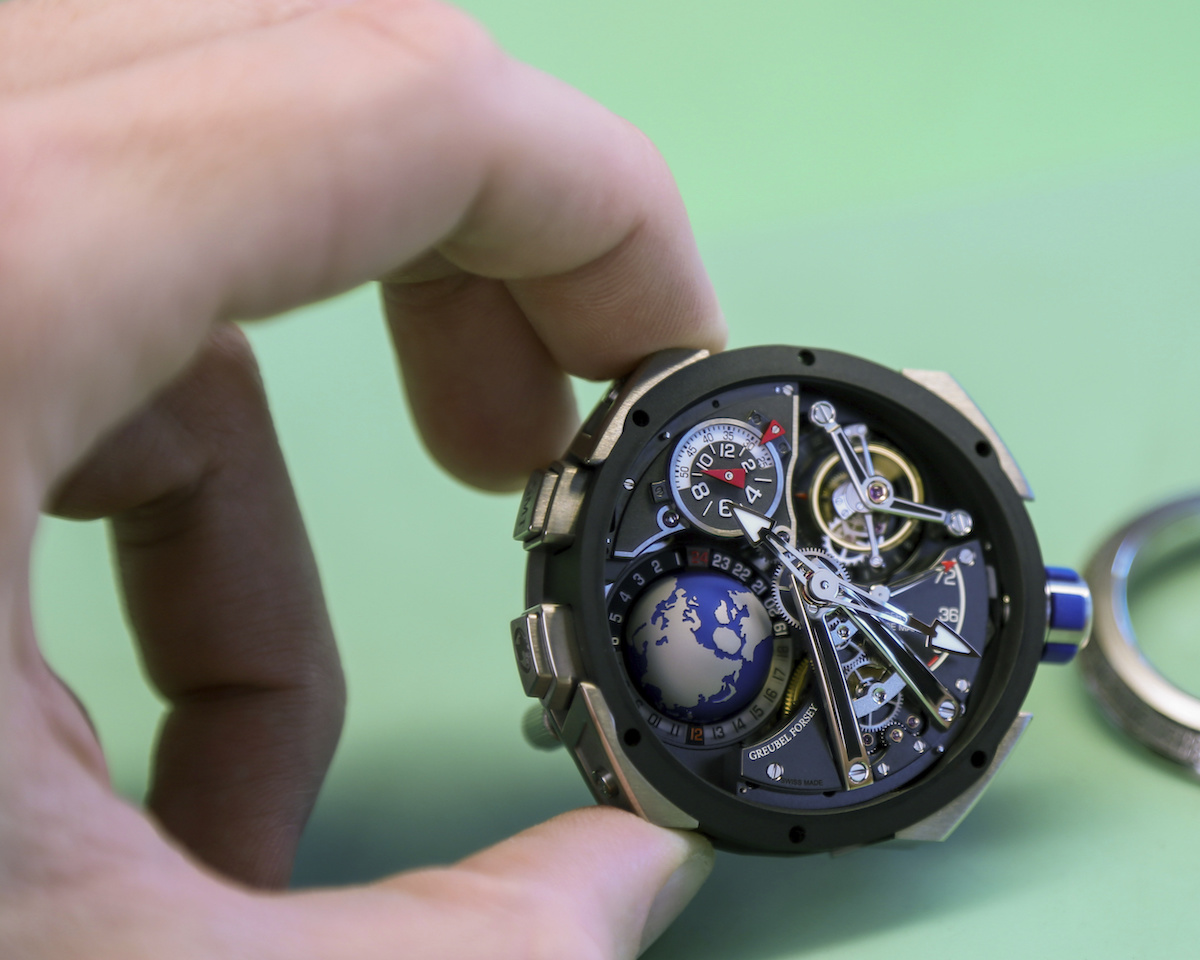 The movement of the Greubel Forsey GMT Sport watch consists of 435 parts.

This watch — destined to be in stores in 2020 (and we will revisit it again then in more detail) — comes on the heels of a very big year for Greubel Forsey. The brand released four new calibers this year.

“It was just a momentum that had been building. We had several different creations coming together all at once, and they all were released this year, from the smaller, slimmer caliber to the GMT Quadruple with four tourbillon,” explains Forsey. “It has been a fantastic adventure. ” 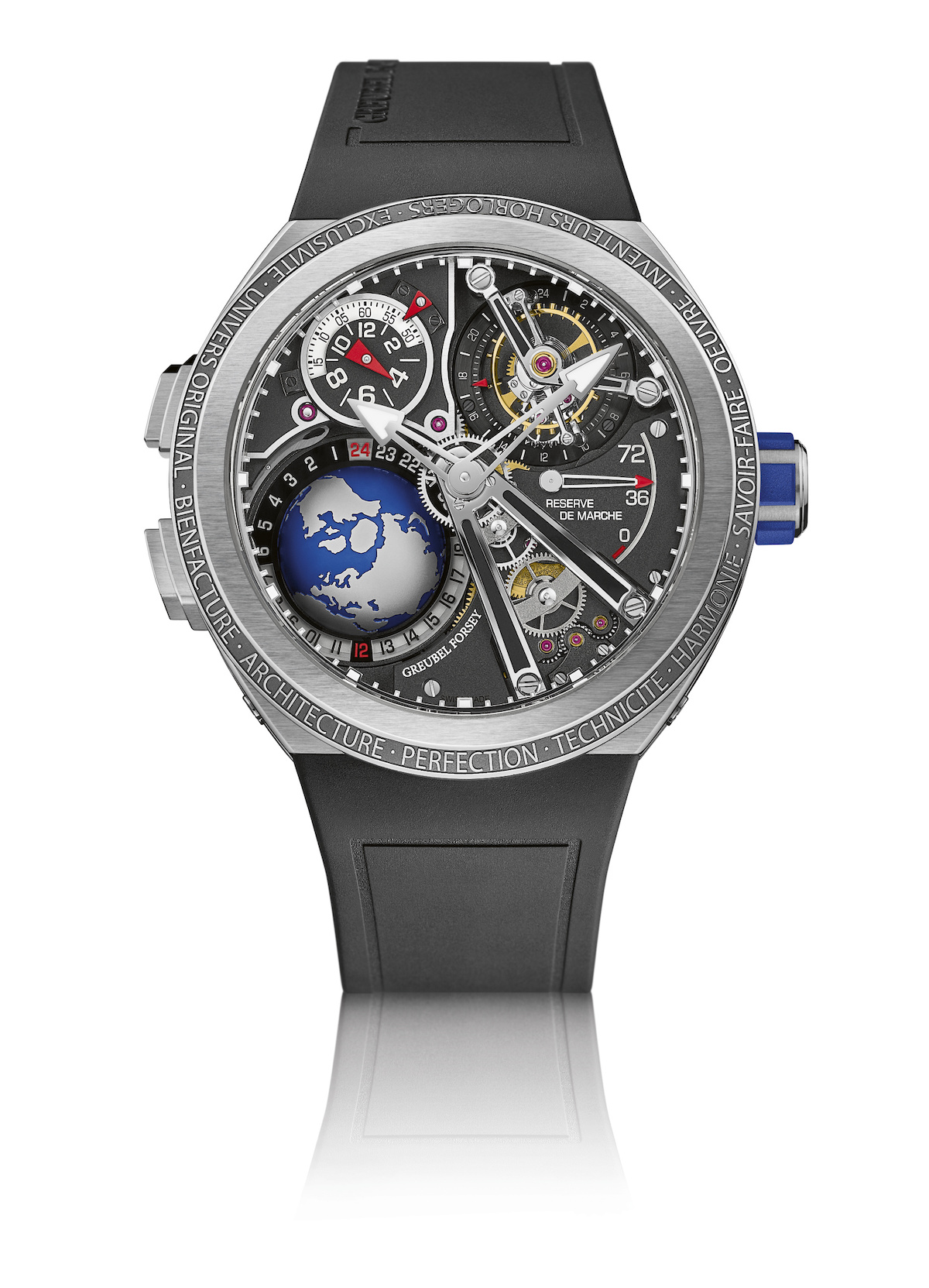 Barrels:  Two coaxial series-coupled fast-rotating barrels (1 turn in 3.2 hours), one of which is equipped with a slipping spring to avoid excess tension