Hands On With The CuleM Skyline GMT Watches 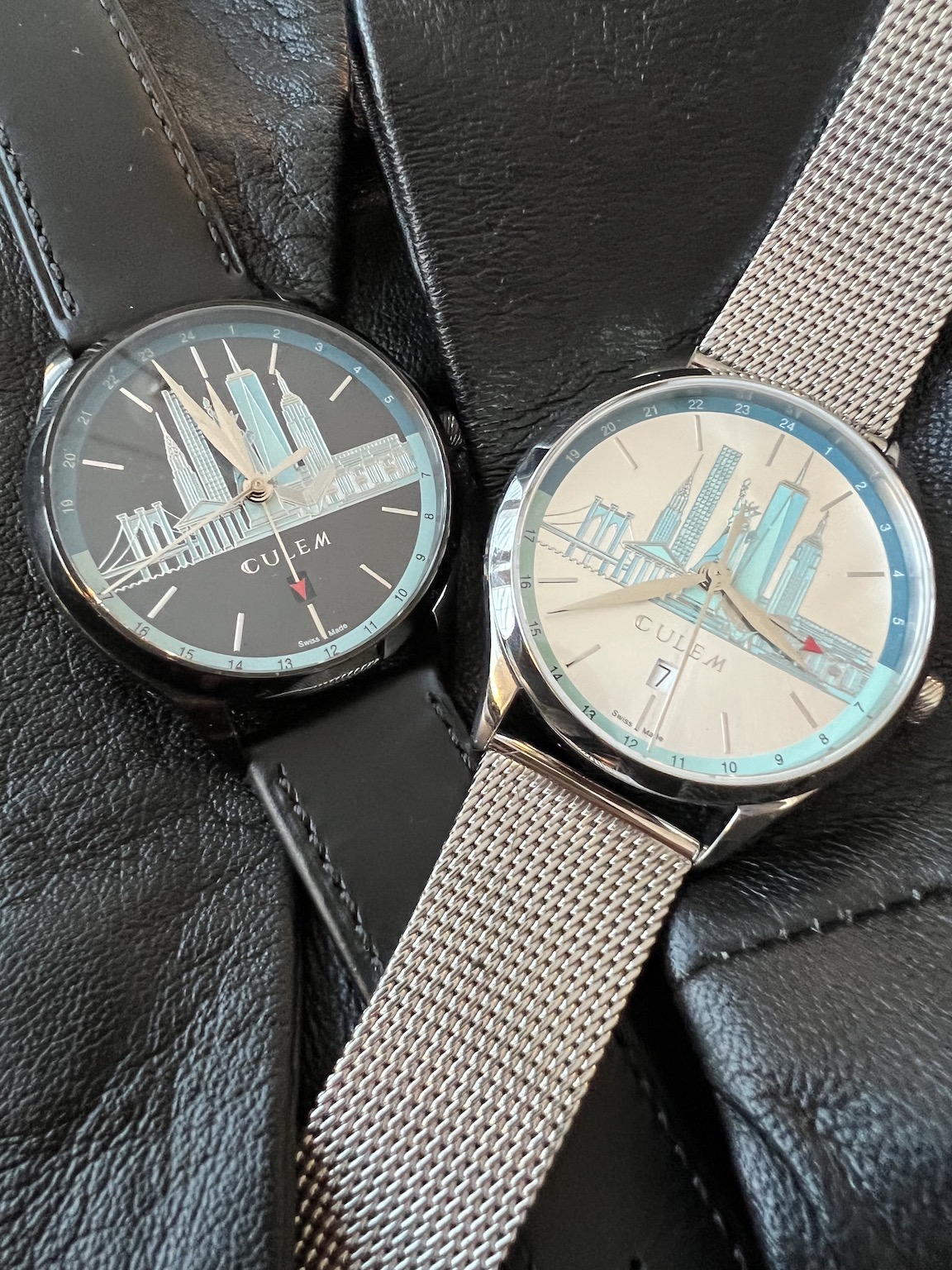 Recently, I had the opportunity to go “hands on” with the newest CuleM Skyline GMT watches and it was a fun experience. The Skyline series is the second evolution for the young brand, whose Portal GMT watch I first reviewed last year. It actually launched the World GMT collection in 2019.

I loved that world map Portal GMT watch I borrowed so much that I didn’t think I could like another as much. Plus, before having the watch in my hands and wearing it, I must admit, I thought the idea of the Skyline was a bit hokey. The brand offers the New York and London city skylines as of right now, but a few others are already on the drawing board. 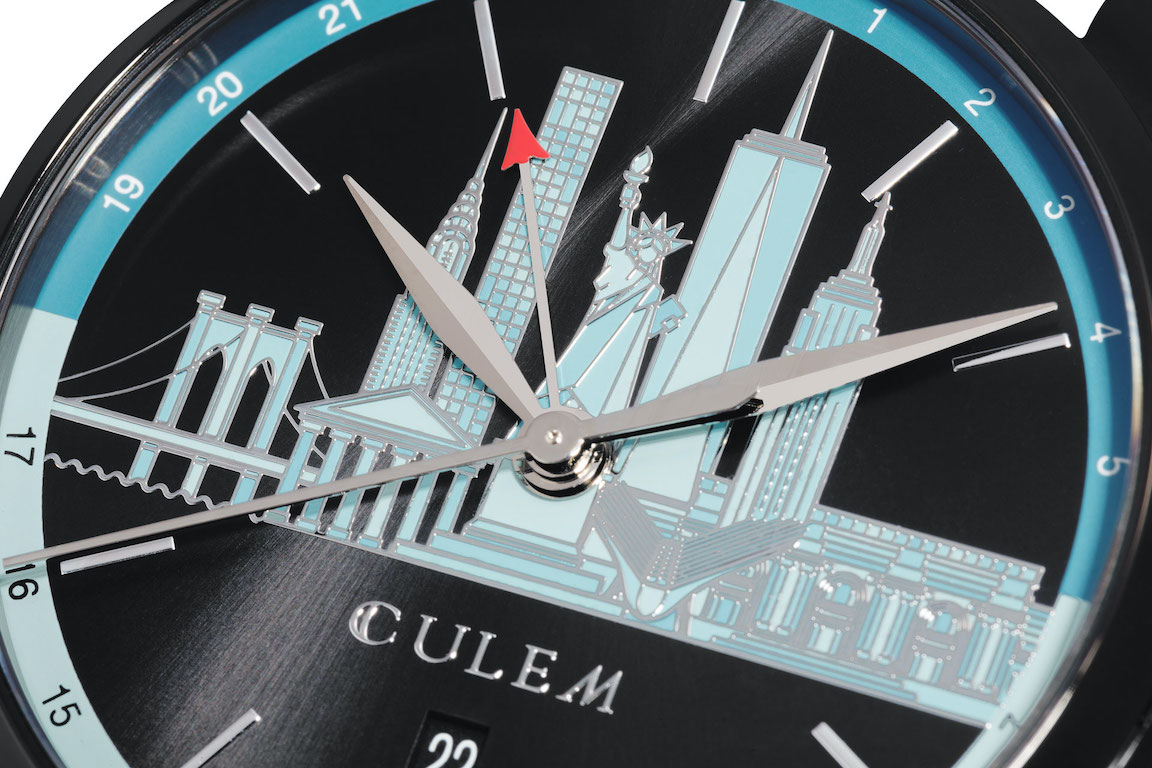 The dial of the CuleM Skyline GMT watches offers great attention to detail.

So, let’s get back to the hokey part – the silly or somewhat contrived aspect of the skylines. At first, I thought maybe Matthew Cule, founder and CEO of the brand, was trying to push it a bit too much. I thought that until I got the watch in and got a good look at it.

To begin with, the skyline he has created is awesome. It brings together some of New York City’s most iconic buildings – from the Brooklyn Bridge to the Empire State Building, One World Trade Center, and even the Statue of Liberty, among others. It is an original rendition that lets the wearer enjoy the highlights of the city in all their glory, especially since each building is depicted with incredible depth and dimension thanks to the silver outlines around the sky blue buildings. 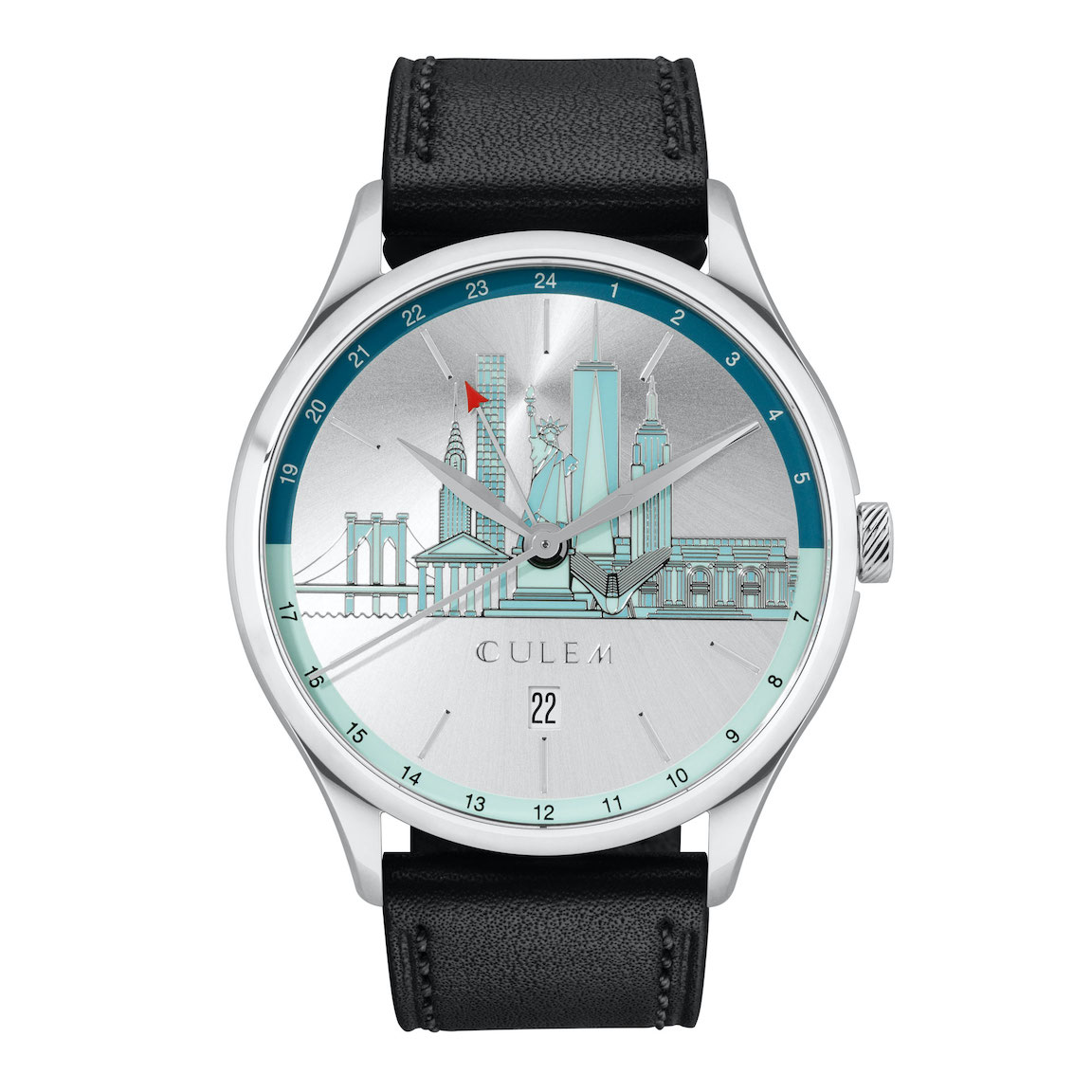 There are two versions available: one in stainless steel with a silver dial and one in black PVD with a black dial. At first I was sure I liked the silver one best, and I even wore it to my nephew’s wedding in Dallas. I thought the idea of bringing a New York Skyline to Dallas was fun and might even strike a bit of discussion.  It did. I got comments ranging from “You’ve got nerve wearing a New York watch here,” to “Wow, do they do one with Dallas yet?” and “Can I see that closer.”

Once that unisex 40mm watch  was off my wrist, it was passed around a bit.

It wasn’t until I returned home from Dallas, that I picked up the black PVD steel version to take a closer look and found that one to be even more Gotham City like. The watches are powered by an ETA 2893-2 automatic movement and are fitted with scratch-resistant sapphire crystals.  The case backs boast a center transparent sapphire circle outlined with the engraving of the world’s top 24 time zones for the GMT reading. 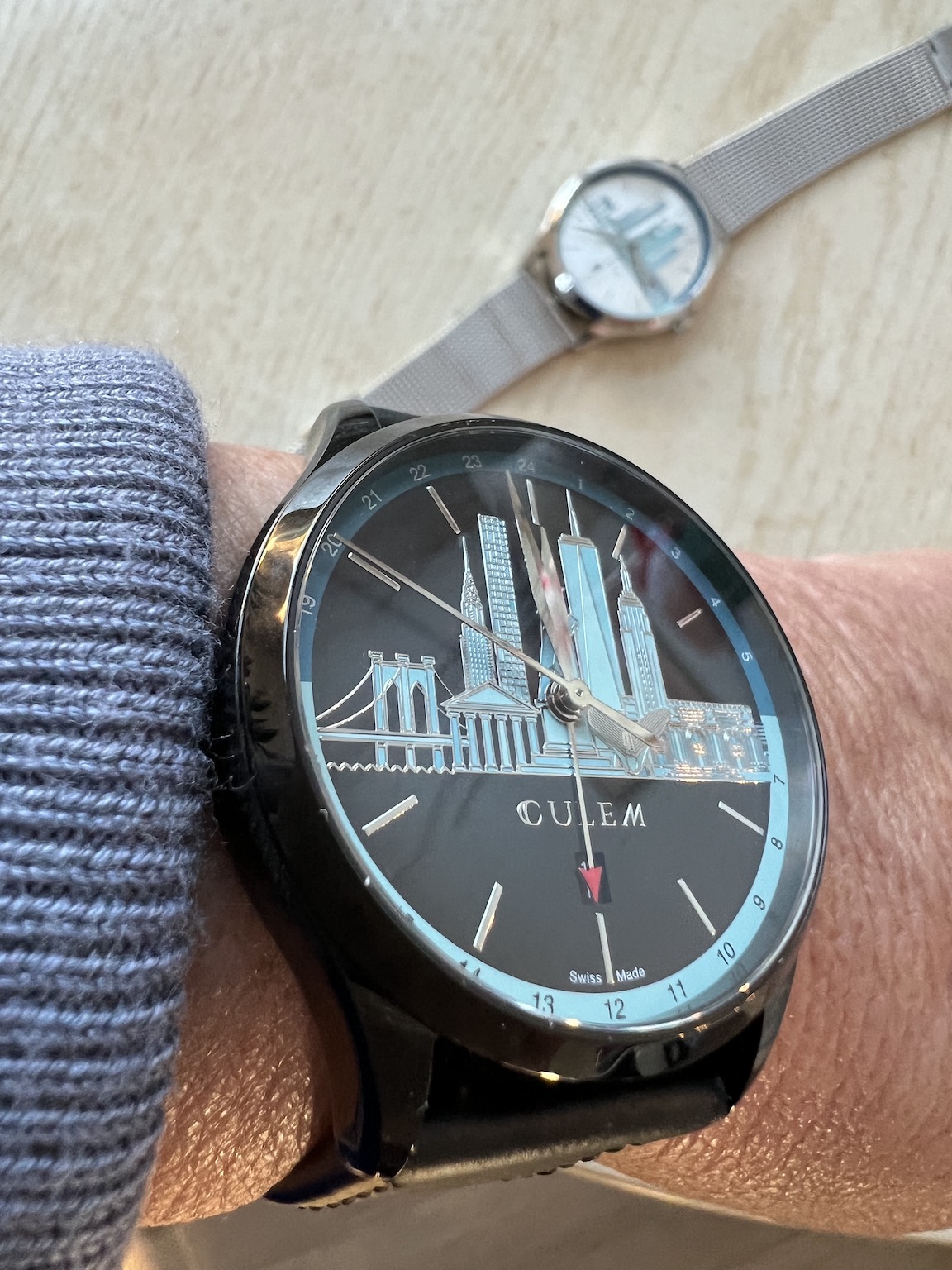 CuleM: Watches for the World

As mentioned, there is also a London Skyline GMT – an apt choice since London plays home to GMT (Greenwich Mean Time). In fact, the Meridian line is even depicted on the London watch from 12:00 to the center of the dial. The buildings on that version are the Famed Tower of London, Tower Bridge, Big Ben and more.

These watches make the perfect travel companion and are definitely a conversation starter. Water resistant to 50 meters, and possessing 42 hours of power reserve, the CuleM Skyline GMT watches are sold with three – yes three—interchangeable straps, including two leather straps and a great Milanese mesh bracelet. The watch is also accompanied by travel post cards, a great trunk-like box and a five year guaranty.  Billing itself as Watches for the World, CuleM even sends the customers an e-passport after their purchase that contains a lot more information than what is sold in the box. 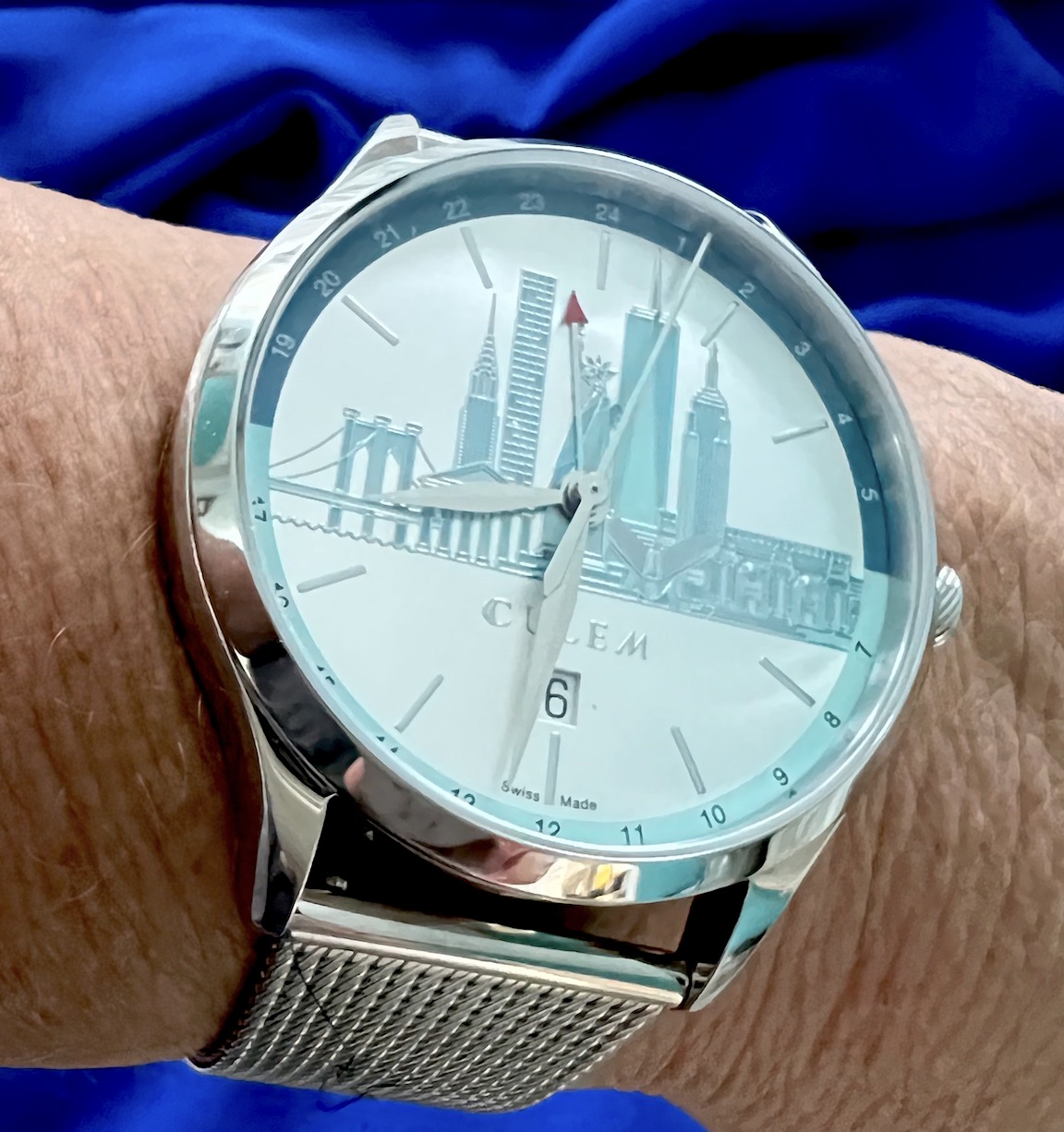 As if the dial and the design is not enough, CuleM offers a few more reasons to indulge, including the  value proposition of the Skyline GMT. The watches retail for $1,195.

Additionally, as has been the brand’s commitment from the beginning several years ago, CuleM donates three percent of all of its sales to conservation and humanitarian charities. Those causes include planting 100 trees in the CuleM forest in Madagascar (for each watch purchased), and, for the Skyline GMT collection, the brand is making contributions to local charities in New York and London depending on the version purchased. 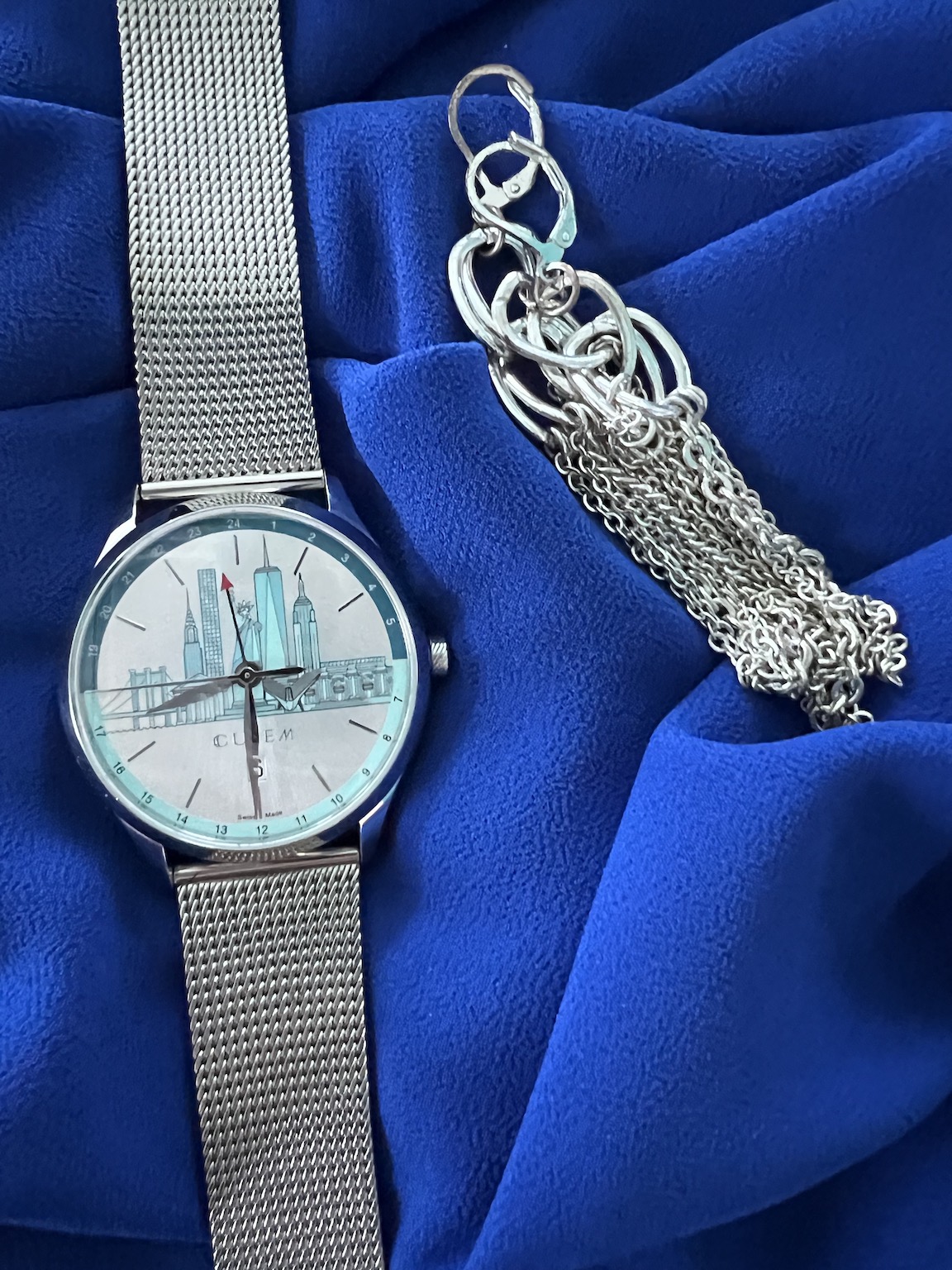 You can dress it up for elegant evenings or down for touring the world.

For New York,  the charity of choice is GrowNYC , whose mission is  “to improve New York City’s quality of life through environmental programs that transform communities and empower all New Yorkers to secure a clean and healthy environment for future generations.” In London, Blueprint for All, which works with young people, is the charity of choice.  CuleM   also continues to donate to its usual UK based global partners, The Rainforest Trust, Ecologi, and Action Aid. To date, CuleM has planted over 18,000 trees and protected over 5.7 million square meters of rainforest.

“CuleM is proud to present our new Skyline GMT collection which we have designed to initially celebrate two very special international cities. These are cities which are inspirational, not only to those who live there, but also to people around the world. They are full of unrelenting energy, where you can find almost every nationality and hear many languages spoken,” says Matthew Cule. 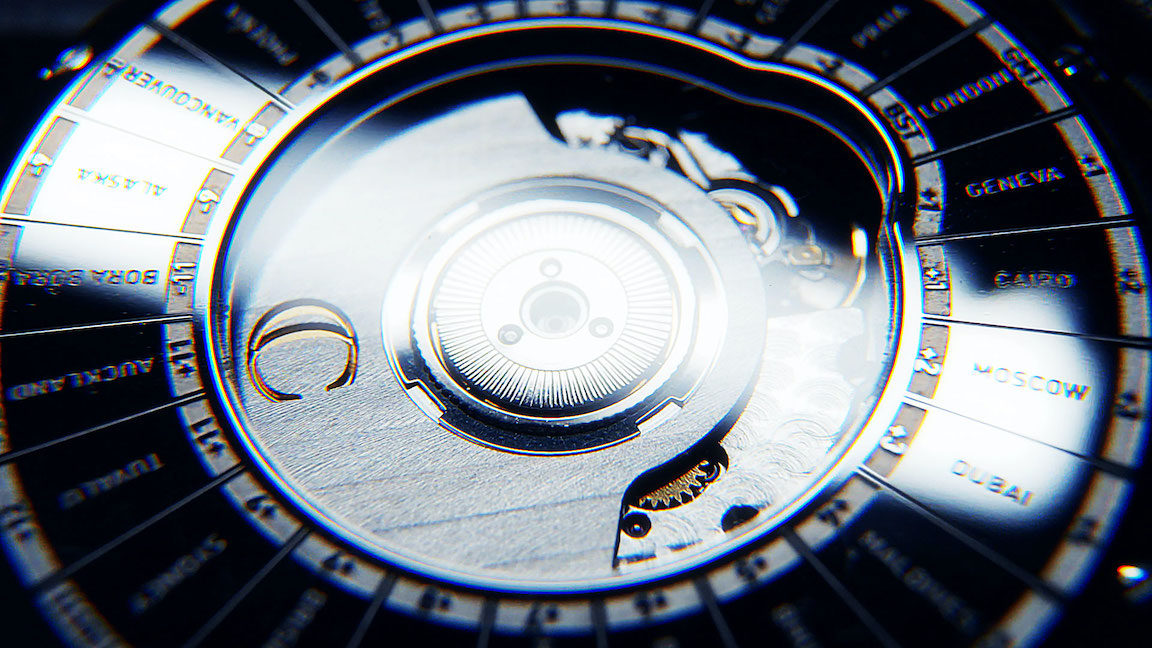 CuleM Skyline GMT watches are engraved on the case back with the world
s 24 key time zones.

I, for one, can’t wait to see what other Skylines are on the drawing board. I doubt I will love any as much as New York (being a trig-state-area native), but you never know …. Venice or Rome might entice me.