Hands On With, And Honest Female Review Of, The MB&F Women’s Legacy Machine FlyingT Watch 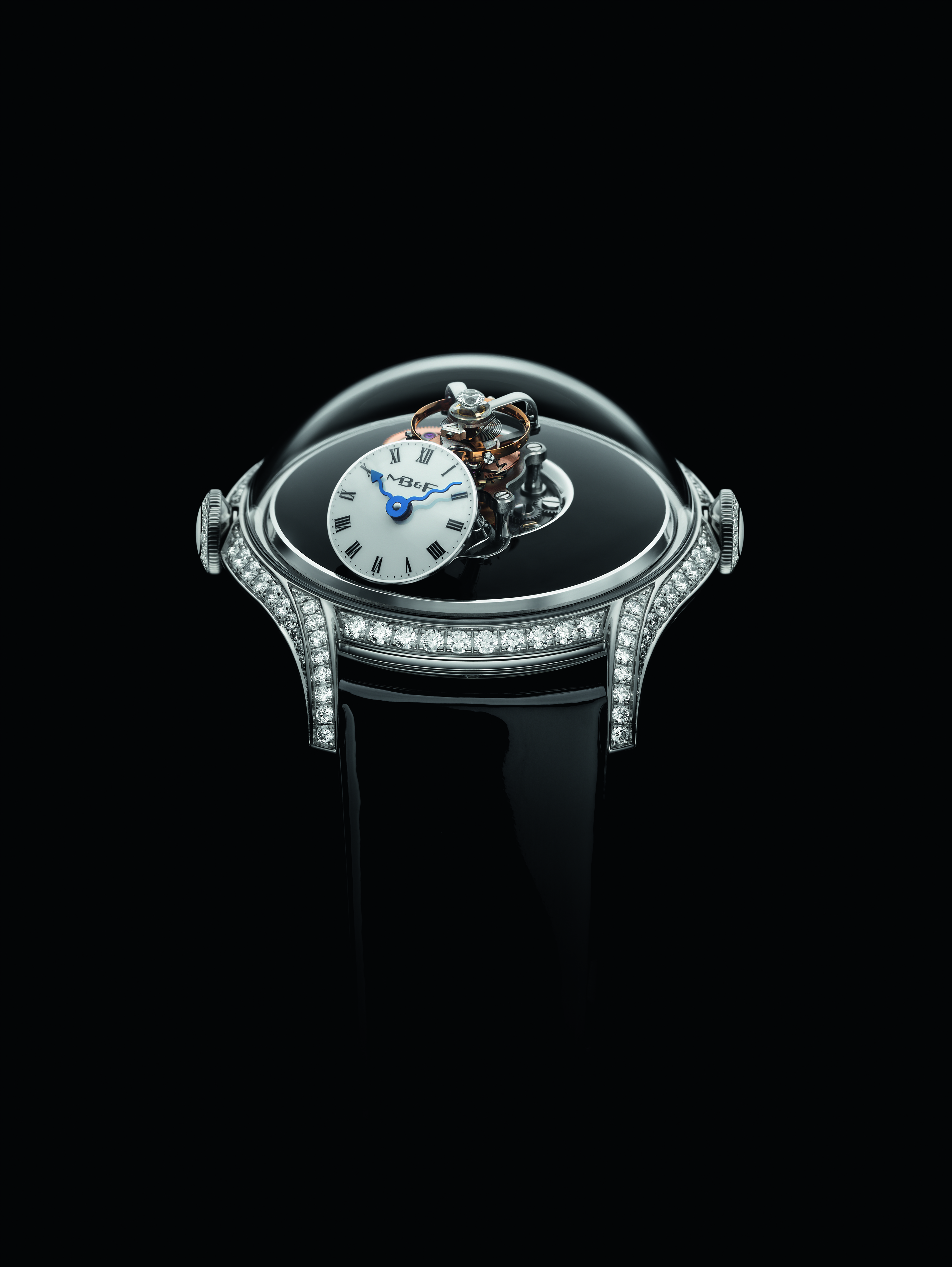 Recently at the SIHH exhibition in Geneva, I got my first chance to go hands on with the newest watch from MB&F: Legacy Machine FlyingT for women.  Before I review this watch, let me offer a little background. To begin with, Maximilian Busser – founder of MB&F – and I have a long history. I met him a few decades ago when he was in the corporate watch world. I watched him flourish as he headed up Harry Winston – beginning the well-known Opus project (working with independent watchmakers to create new timepieces annually) — and taking the brand to new heights. I met with him on a bench outside SIHH the year before he even introduced MB&F or its first watch to the world. There he showed me his concept and, in typical Max style, his passion and enthusiasm abounded. I knew Max would be successful in anything he pursued because he is a believer. 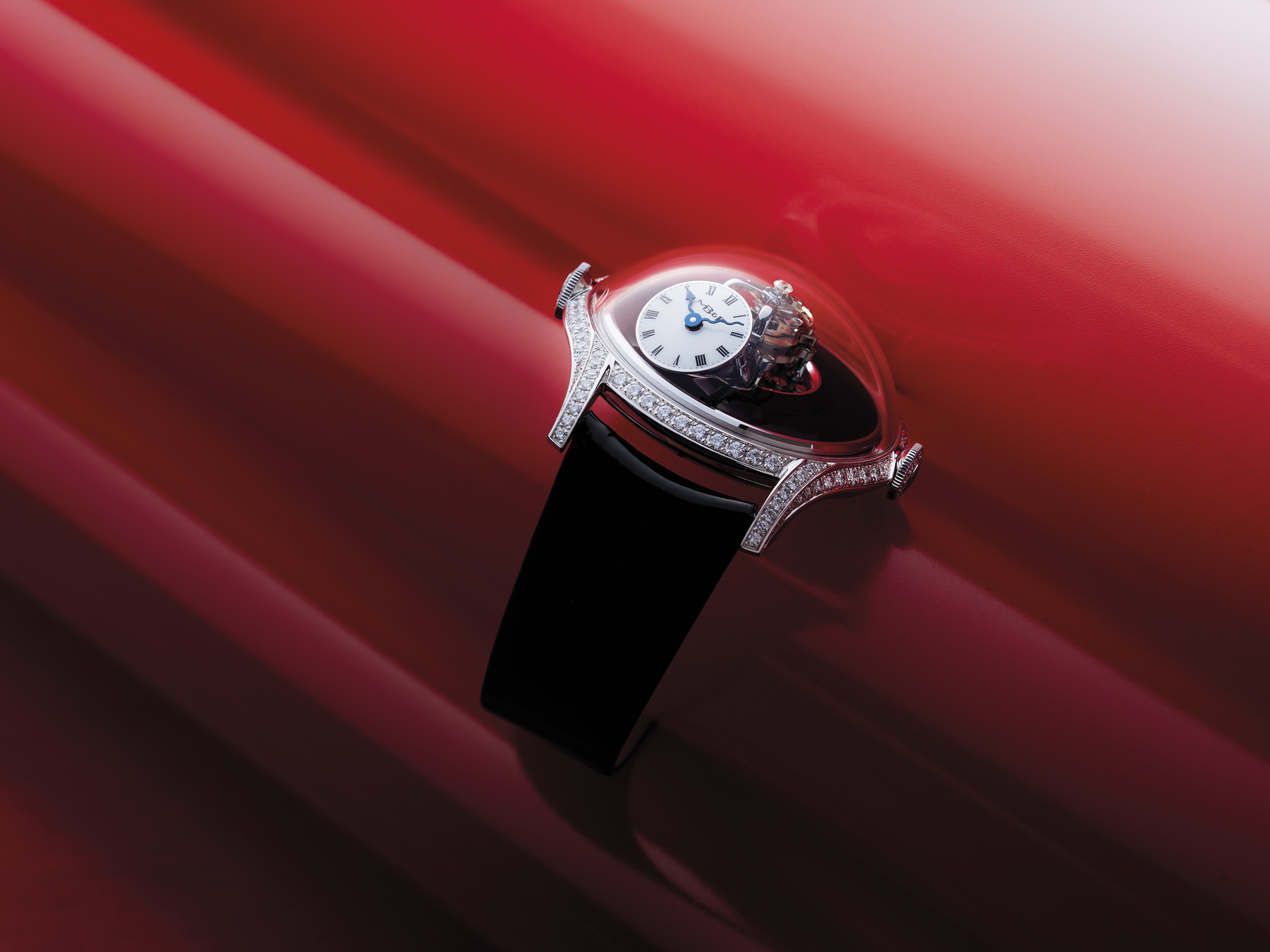 The 280-part movement of the MB&F LM FlyingT is built in a vertically stacked mode for visually arresting beauty.

Since his childhood, Max played alone most of the time. Without many friends, he built a castle and a fortress of his bedroom and embarked on adventures to save the world. He was Luke Skywalker one day and another superhero another day. He had a passion for art, drawing, cars and design. His venture into the watch world was a bit of a stray for him (one he took for personal reasons), but in the end, it was all sort of some divine plan.  At any rate, I digress.  The reason I am telling you of my close and honest friendship with Max is because I don’t want anyone thinking my review of the watch is jaded by my relationship. It isn’t. It is honest because, to be truthful, I have some reservations about this first watch designed expressly for women. So, here goes. 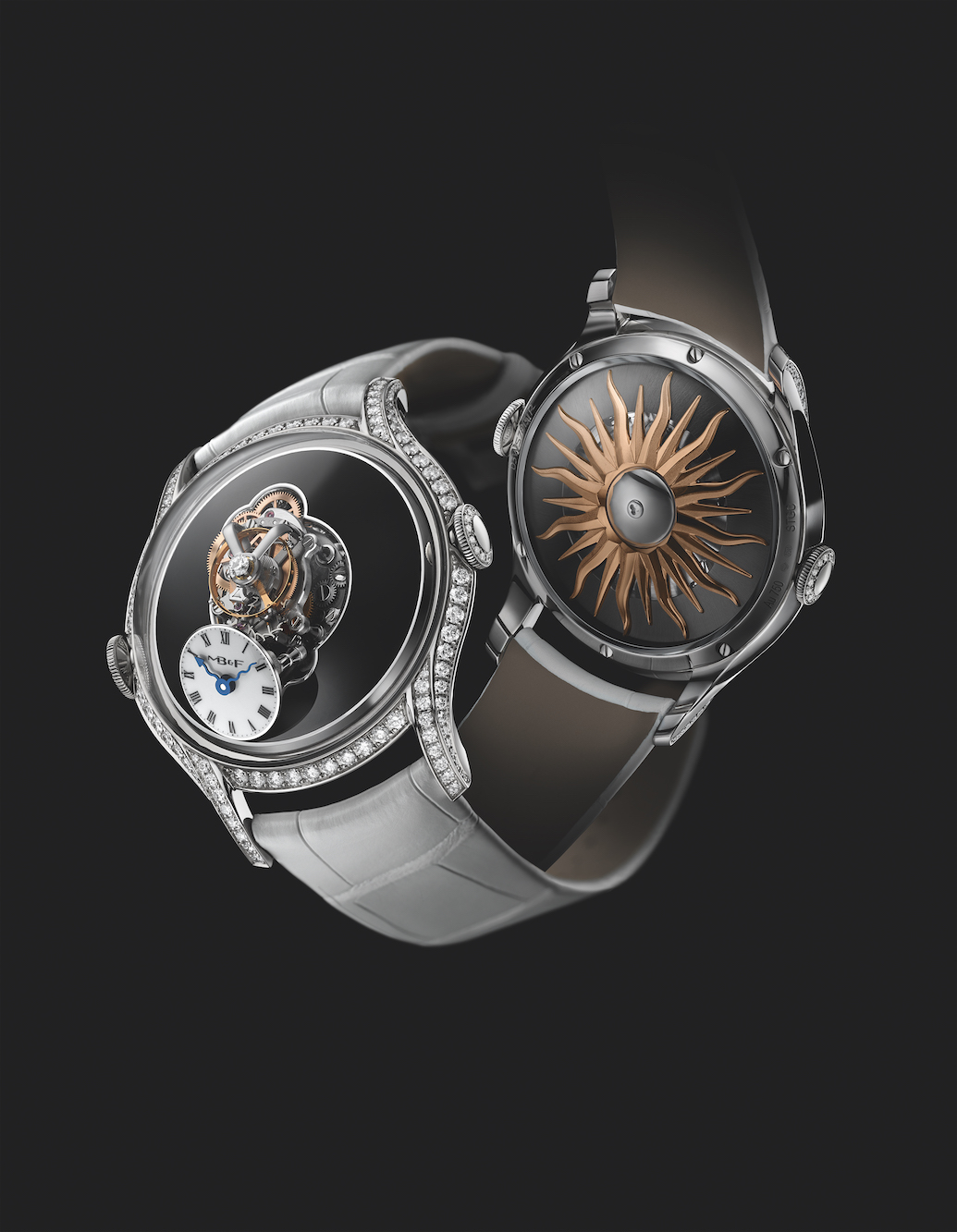 The rotor of the MB&F Legacy Machine FlyingT is formed as a sculpted sun.

Ok so first, I’m disappointed in the name.  The watch is a superb tourbillon and many of today’s women want brains as well as beauty in their watch. They love what’s under the hood, so to speak, and good mechanics count for a lot. Additionally, women buying a complicated watch are happy to show it off for its technical side. So, I would have left the Tourbillon in the name for a more powerful appeal: Legacy Machine Flying Tourbillon. But, the T works, as well. 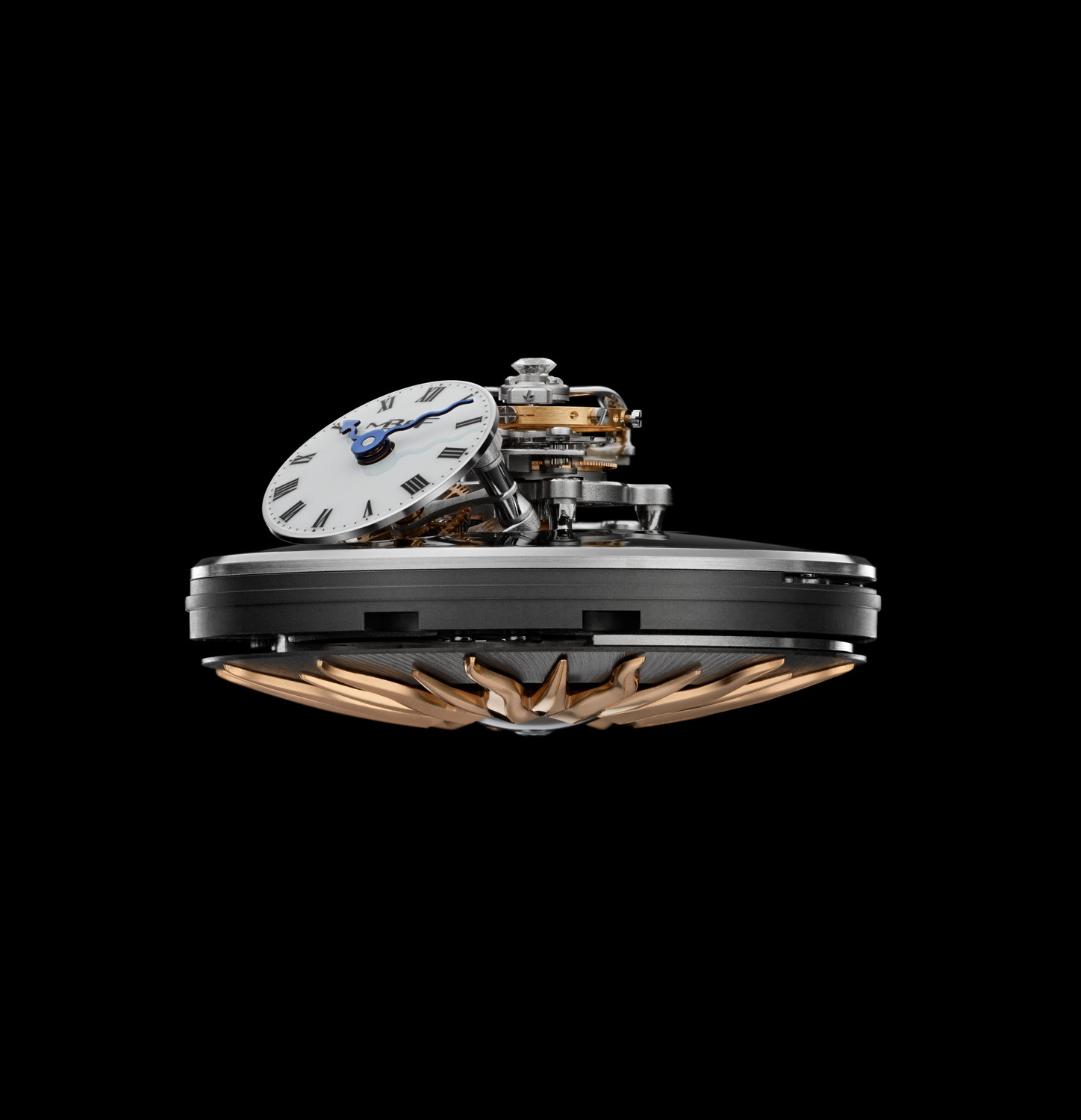 The dial for the women’s MB&F Legacy Machine FlyingT watch is positioned at 7 o’clock for personal  reasons.

Name aside, let’s get to the watch. To begin with, and I would expect nothing less, the mechanics are superb. The 280-part movement of this watch – which is predominantly visible from the dial side – is built in a vertically stacked manner so that the 60-second central flying tourbillon rises above the rest of the caliber and reaches high toward the half-orb sapphire domed crystal. The components of the movement form a column that reaches nearly to the top of the dome and the upper tourbillon cage with a rigid double-arched cantilever design (instead of MB&F’s usual battleax bridge) is topped with a shimmering faceted diamond that rotates with the tourbillon cage.

With all of this high-mech design, we still need a way to tell time. As such, the Legacy Machine FlyingT features a small angled dial (at 50-degree angle) at the 7 o’clock position that is affixed to the movement and that displays the hours and minutes using serpentine hands. The dial, offered in black or white, is small enough that only the wearer can read the time — making it somewhat of a personal secret. 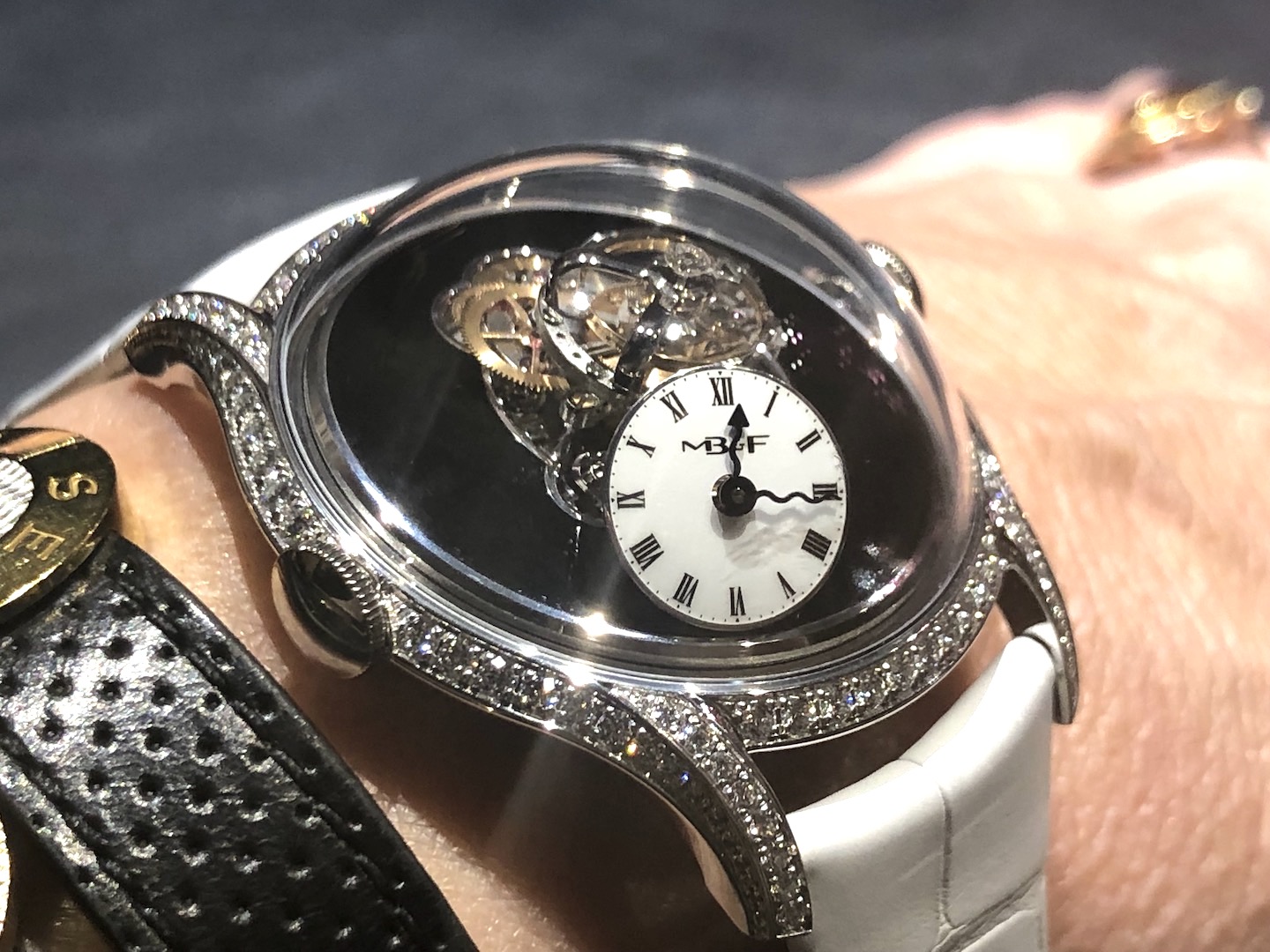 For me, the dial is bothersome because it interrupts the view of the majestic movement for the wearer. I realize that we need a way to indicate time on this watch and I realize that placing it at 7o’clock is also a nod toward Max’s belief that his creativity cycle spans seven years, but here, I wish that instead of a black or white dial, MB&F had turned to a sapphire see-through dial so that the movement is still highly visible. Taking it a step further, and more in keeping with MB&F, I also think it would be totally cool to have the hands and numerals luminescent or even created in Black Badger neon hues.

The three-dimensional movement offers a generous 100 hours of power reserve. As a woman, I really appreciate the 100 hours because many women’s watches have less than half of that. It makes it easy to put the watch down for the weekend when you may want something more sporty or just a change of watch, and pick it up again on Monday to show off in the boardroom. I also really love the highly sculpted automatic winding rotor. It is crafted in 18-karat 5 N rose gold and formed in the shape of a stylized sun. 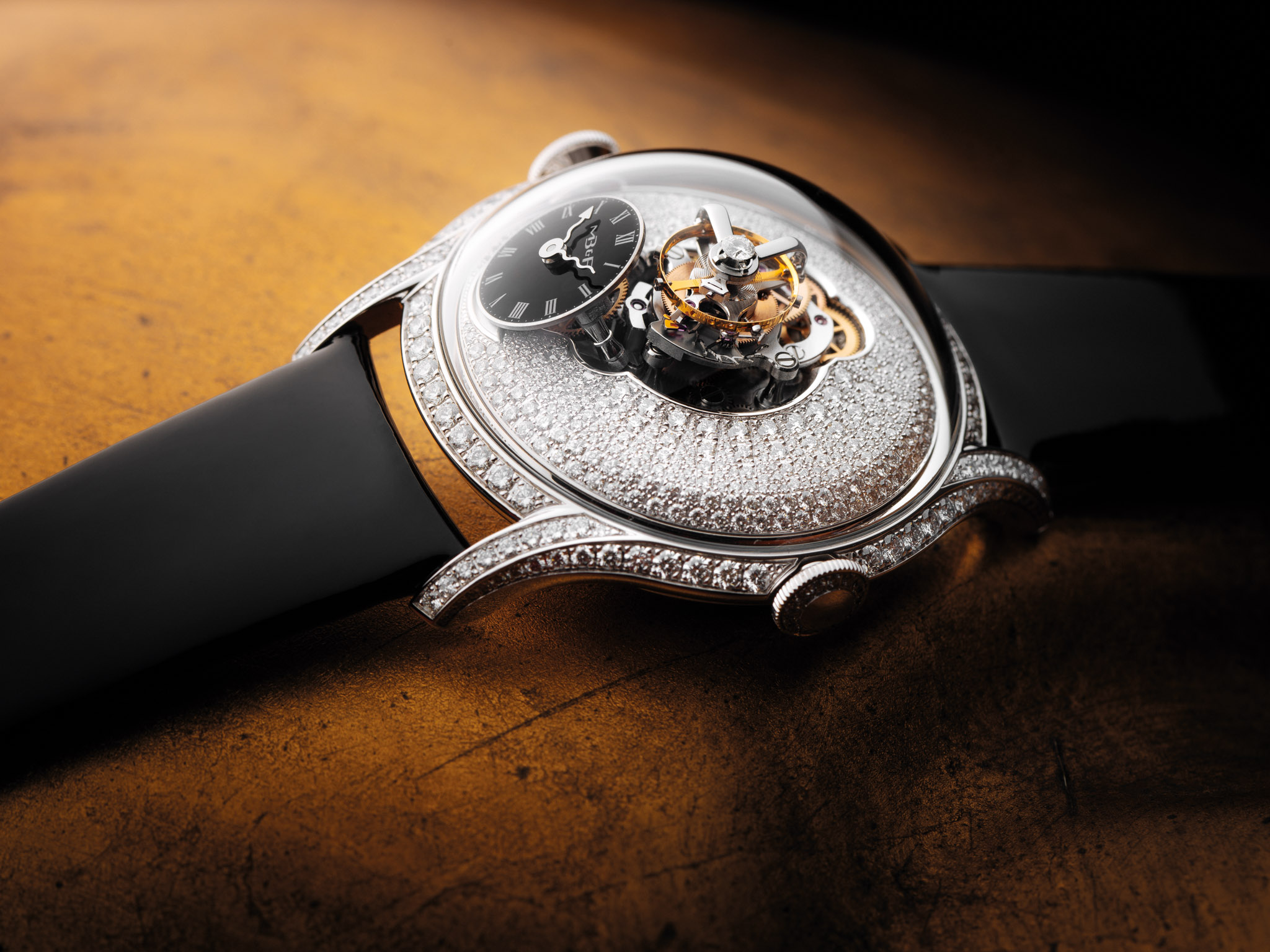 The MB&F Legacy Machine FlyingT is crafted in 18-karat white gold. While MB&F turned to its round Legacy Machine case for this watch, it had to be re-designed for this movement and reduced in size. The new 17-part Legacy Machine case measures 38.5mm x 20 mm. For me, it is a bit small. I would have preferred 40mm because I like a bigger watch.  There are two winding crowns on the watch, as well, offering beautiful symmetry. The crown on the left is the winding crown, while the one on the right is for setting the time.

A For the initial rollout of the MB&F Legacy Machine FlyingT, there are three versions. They differ in the dial-plate material – the area that surrounds the emergence of the movement from below. The dial plates are slightly curved for added depth. One version is offered with a dial plate in rich black lacquer and with case and lugs set with brilliant-cut diamonds. A second version features a dial plate, lugs and case pave’ set with brilliant-cut diamonds. The third is a majestic and dramatic rendition with dial plate, case and lugs fully set with baguette-cut diamonds. 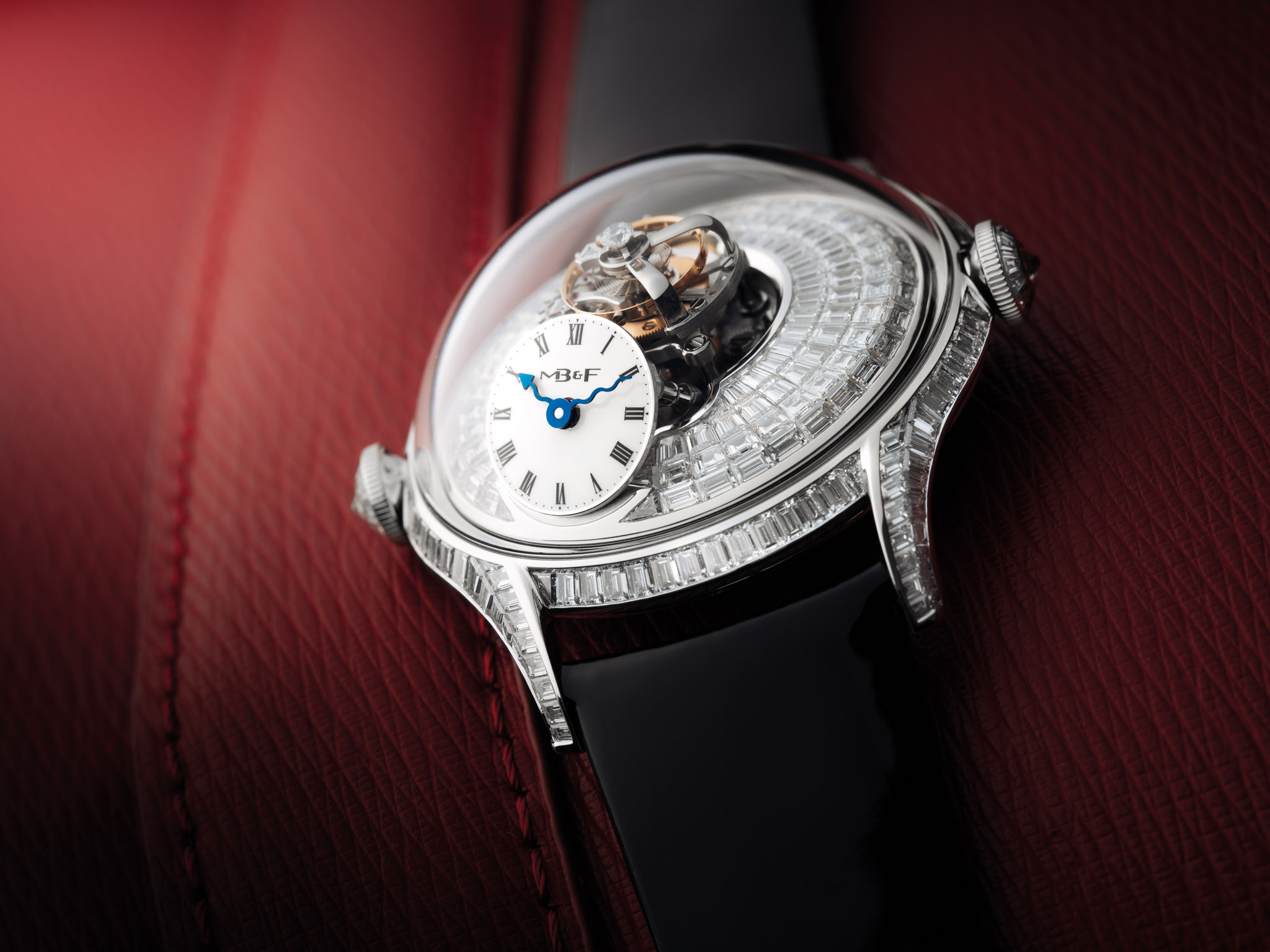 Here again, the watch is just a bit too shimmery for me. I would have loved a non-diamond-set version. Everything for women does not need to be decked out in diamonds.I know this is something Busser struggled with in the design of the watch. Having created it with the women in his life in mind (his mother, wife and daughters), he wanted elegance that reflected them. As such, diamonds prevailed.  With the exception of the baguette-diamond version which is just superb (let’s face it — there is something very special about baguette-cut diamonds invisibly set on a watch), I think the diamonds are nice but, for me, they distract the eye from the mechanics of the watch. I actually would love a version that is diamond-less. I also would love a version with a sapphire dial plate so that I could see right through the entire watch. Don’t get me wrong. I am not knocking the MB&F Legacy Machine FlyingT. I actually really love it. I’m just a little on the fence here about whether or not MB&F went too feminine with the diamonds, erring perhaps on the side of conventional expectations.

According to Busser, “I wanted LM FlyingT to possess the epitome of femininity as reflected by the women in my life, particularly my mother. It had to combine supreme elegance with tremendous vitality. The column-like structure of the flying tourbillon was very important to me as I felt very strongly that women form the pillar of humanity. There is another layer of meaning coming in from the sun-shaped rotor, which incorporates the element of life-giving, a source of sustenance which we gravitate towards and around.” 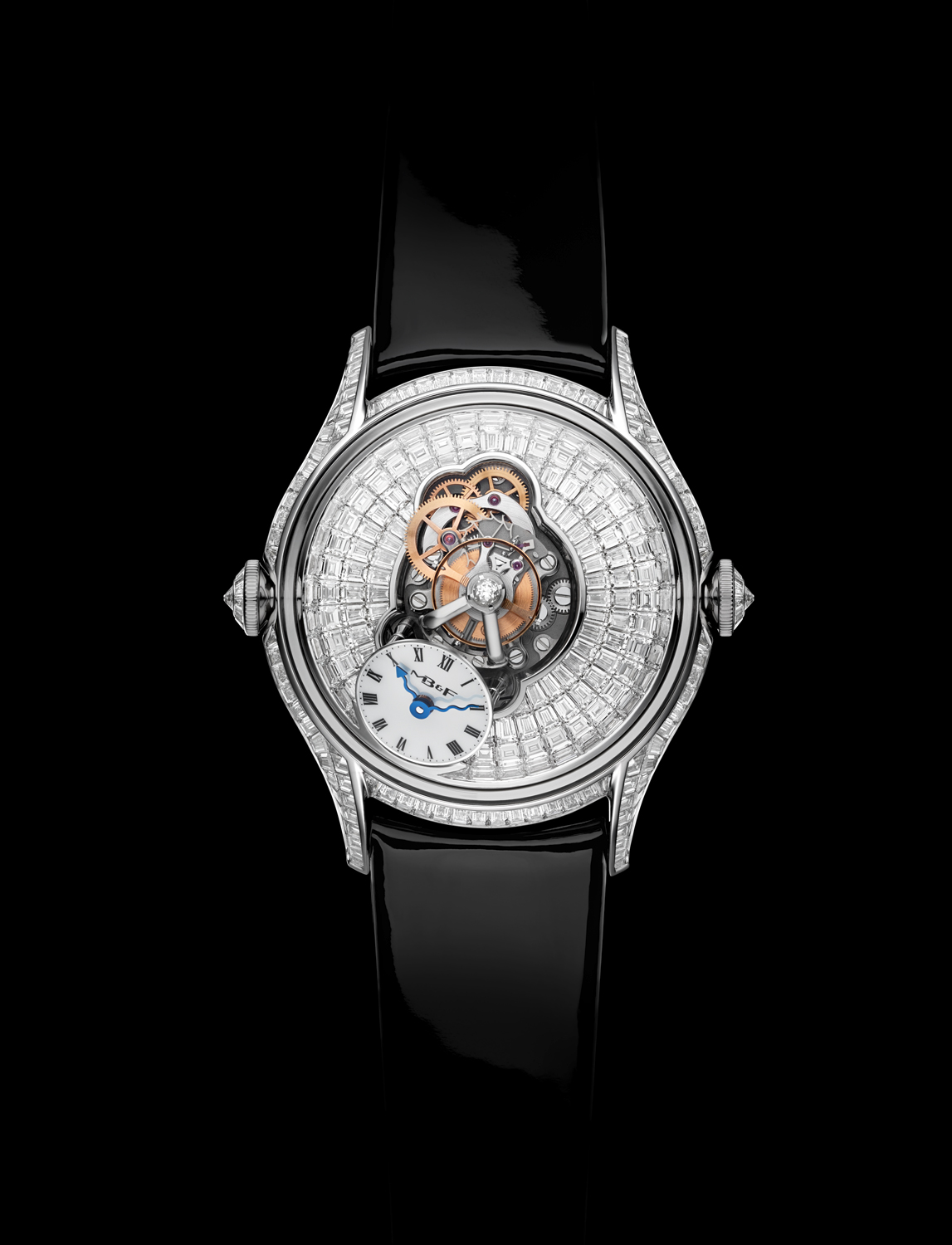 Now that I have been brutally honest and have pointed out all of the features I like and don’t like about this watch, let me give you my overall impression. It is superb from a mechanical standpoint. The movement is exceptional and I love the vertical stacking and the cantilever bridges. For the first women’s watch created by MB&F, this timepiece is definitely on target as a three-dimensional sculptural kinetic work of art that defines the brand. I may personally not like the ultra-feminine diamond enhancements, or the non-transparent dial, but that wouldn’t stop me from snapping up one of these “first” women’s watches from MB&F — if I had the money. 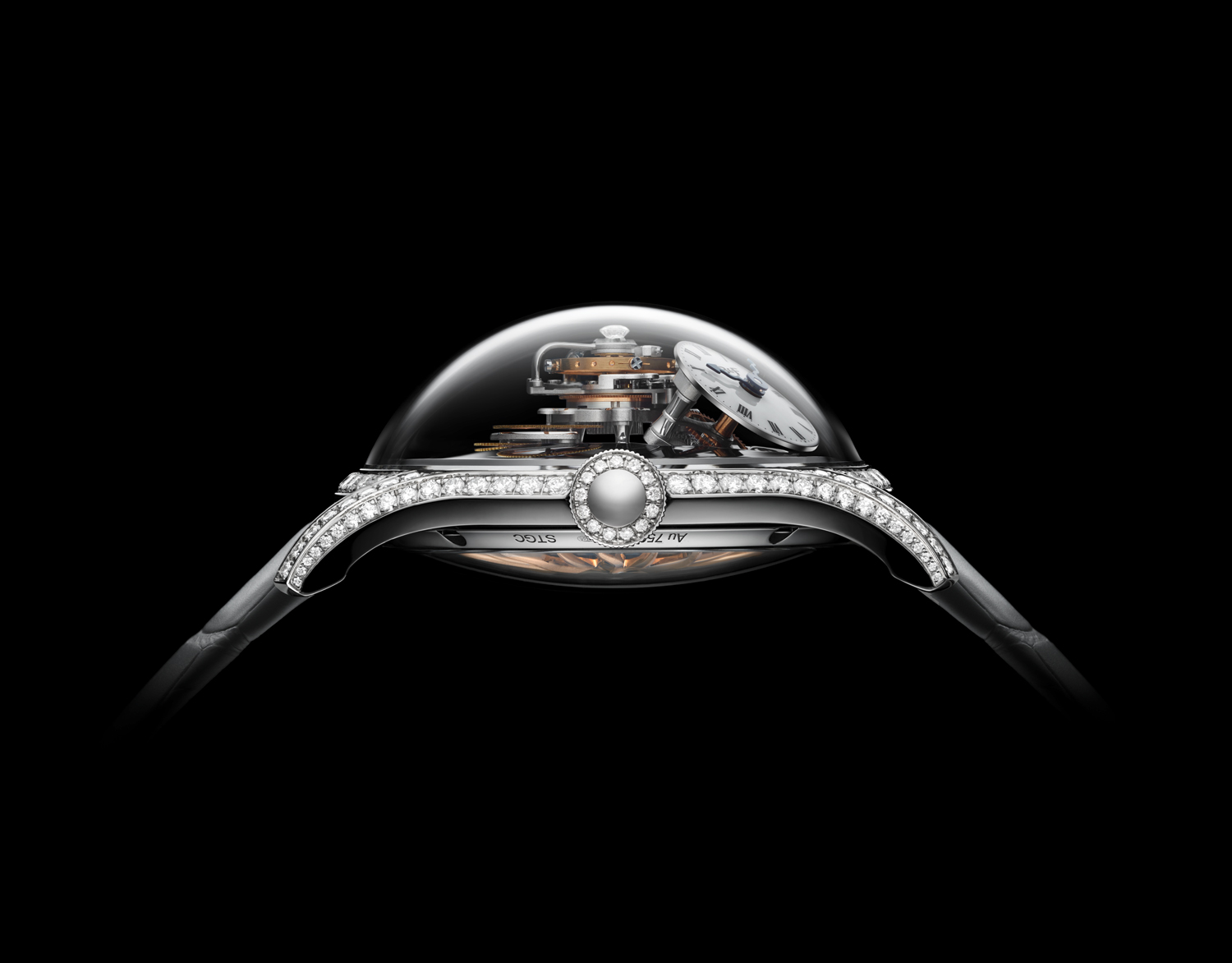 Hours and minutes displayed on a 50° vertically titled dial with two blued serpentine hands. Two crowns: winding on left and time-setting on right