Hands On With A Watch That Could Save Your Life: North Eagles H2S Detector Watch 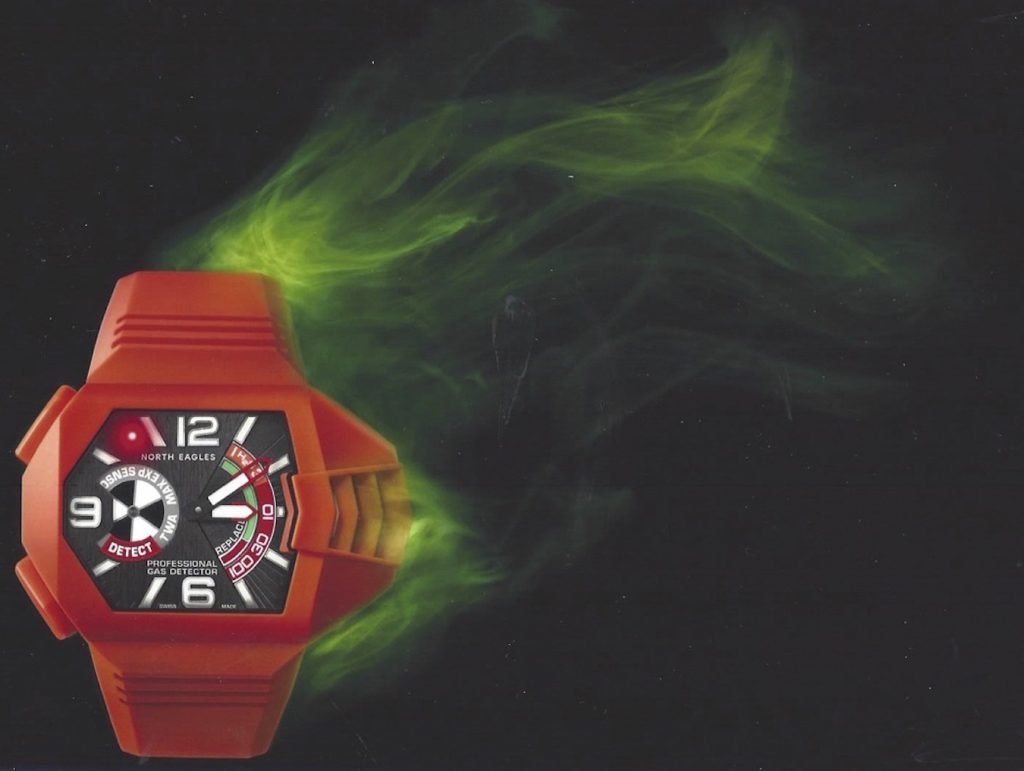 North Eagles H2S Detector watch may save your life.

Last week on my Perfect Timing column on Forbes.com, I introduced a timepiece that — if you are in the oil and gas industry — could save your life. Now, I go hands-on with the North Eagles H2S Professional Gas Detector watch. The watch, created by North Eagles Swiss brand that has been making watches for the  military since 1985, was  more than three years in the  research and development stages. The smart watch is, quite frankly, designed to save lives by detecting — and warning — those in the oil industry of lethal gas. The H2S Professional Gas Detector watch houses a patented hydrogen sulfide gas sensor that can detect the tiniest levels of this poisonous gas and issue an alarm warning in three different ways: visually, audibly and via vibrations. 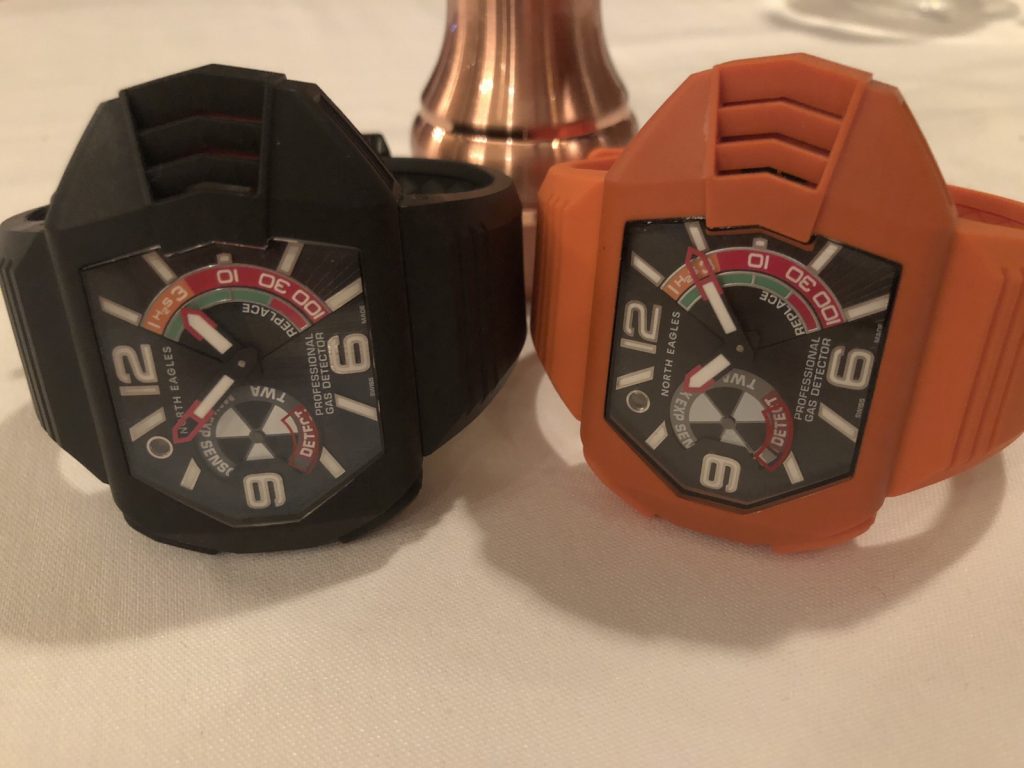 Typically, on an oil rig or in other gas/oil industry situations, everyone is equipped with a gas detector that clips onto the vest or shirt. The watch — a device that generally doesn’t come off the wrist — may be a more powerful tool for a multitude of reasons. First, you wouldn’t just put it down — during lunch, for instance — and walk off without it, as you could with a clipped device. Secondly, according to North Eagles, the wrist has a larger “wing span” and so as one moves around, the watch can detect gas in a slightly larger range than the stationary clipped device. Additionally, the wrist is typically lower than the clipped vest device, and may detect gas (which rises from below) sooner than the stationary safety device.

How the H2S Detector Watch Works:

A world premiere, the H2S Detector watch is designed to alert  the worker, as well as  those tracking the workers on oilrigs and other gas/oil fields,  to the presence of theH2S. Once gas is detected, the watch has a patented alarm system that warns the wearer via a flashing LED light indicator on the dial, as well as a 96-decibel high-volume audio alarm, and a vibrating warning signal.  The detector uses the newest electrochemical sensor miniaturized to fit inside the 64mm diameter. 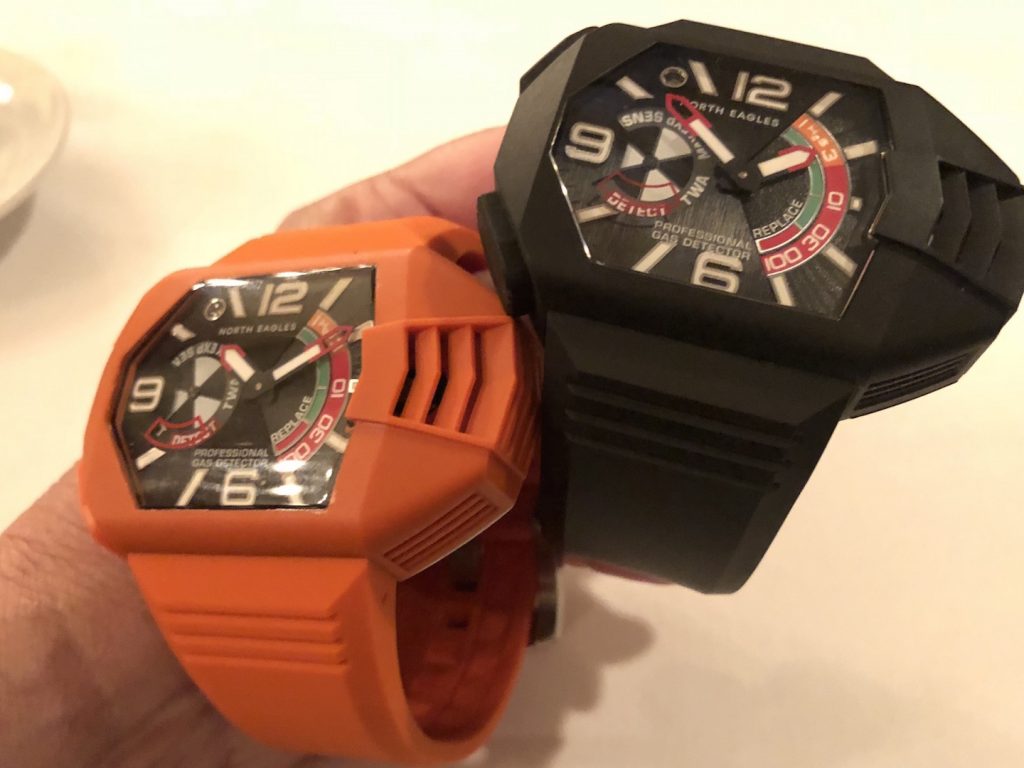 “The smart watch syncs with the North Eagles H2S app on the smart phone. The gas detector watch can transmit the alarm directly to the control room via a Smart phone or the smart Network. It will also transmit the user’s name, his or her location on site, the amount of gas concentration and the exact time the alarm was sounded. This is designed to help reduce the reaction time between an H2S leak and the emergency response time.  It has passed all global standards for security detection and warning devices, including ATEX, IECEx, UL and CE. Those certification markings are engraved on the case back of the timepiece. The instrument is so technologically advanced that it can also work with other sensors including temperature, pressure, wind speed and more.”

“The watch features a replaceable four-year sensor and battery, and features a battery and sensor end-of-life indicator on the dial. The timepiece will work in -40 degree Celsius to +50 degree Celsius temperatures. Swiss made, the North Eagles Connected H2S watch also indicates time using hour and minute hands. The rectangular watch measures 64x41x 25mm and is made using high-tech polymer and a scratchproof sapphire crystal. Initially it is offered in Crude Black ($995.), Beacon Orange ($995.) and Derrick Steel ($1,500) with bold blue strap.”

My Impressions of the North Eagles  H2S Detector Watch 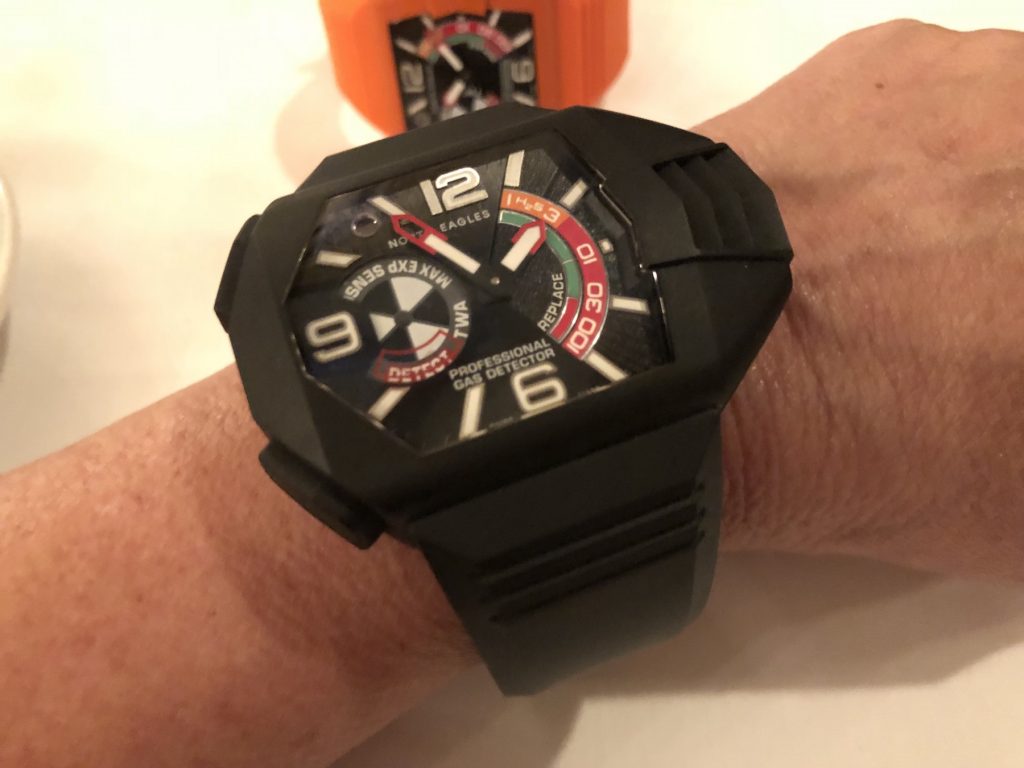 At first glance, the watch is large. However, that’s ok for a variety of reasons, the most important one being that it could save your life — so who cares if it is a bit big. Honestly, though, I have a small wrist and when I put the watch on, it was not too overpowering. Several of today’s independent haute horology watch brands are offering watches almost as big — and those are just watches … they pretty much won’t save your life unless they are crafted of bullet-proof materials. Another thing that impressed me about the North Eagles H2S watch is the fact that it is ultra lightweight.  This is important because many of the rigs are found in hot climates and no one wants a 10-pound weight on their wrists. I love the fact that even though this is an instrument, the company has paid attention to the watchmaking aspects in terms of battery life, indications and even colors. Plus, the names of the strap colors are cool: Crude black, Beacon orange, and Derrick Steel. Having a son who is a police officer, I think every day, multiple times a day, about his safety. If he were in the oil and gas industry … I would have already ordered one of these   H2S Detector watches. Kudos to North Eagles. 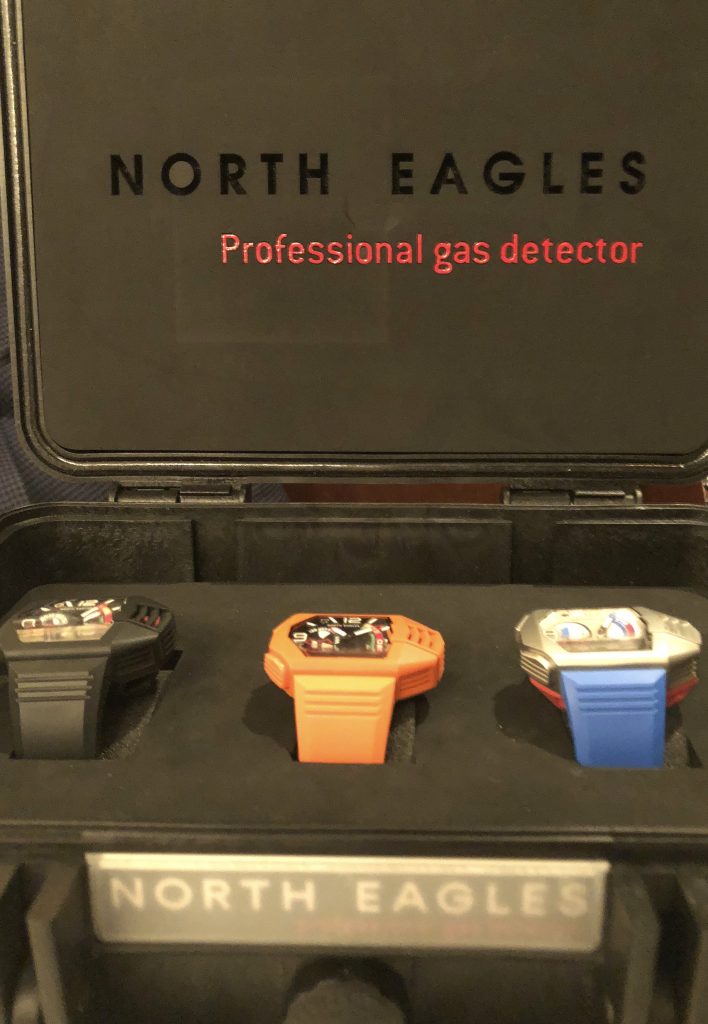