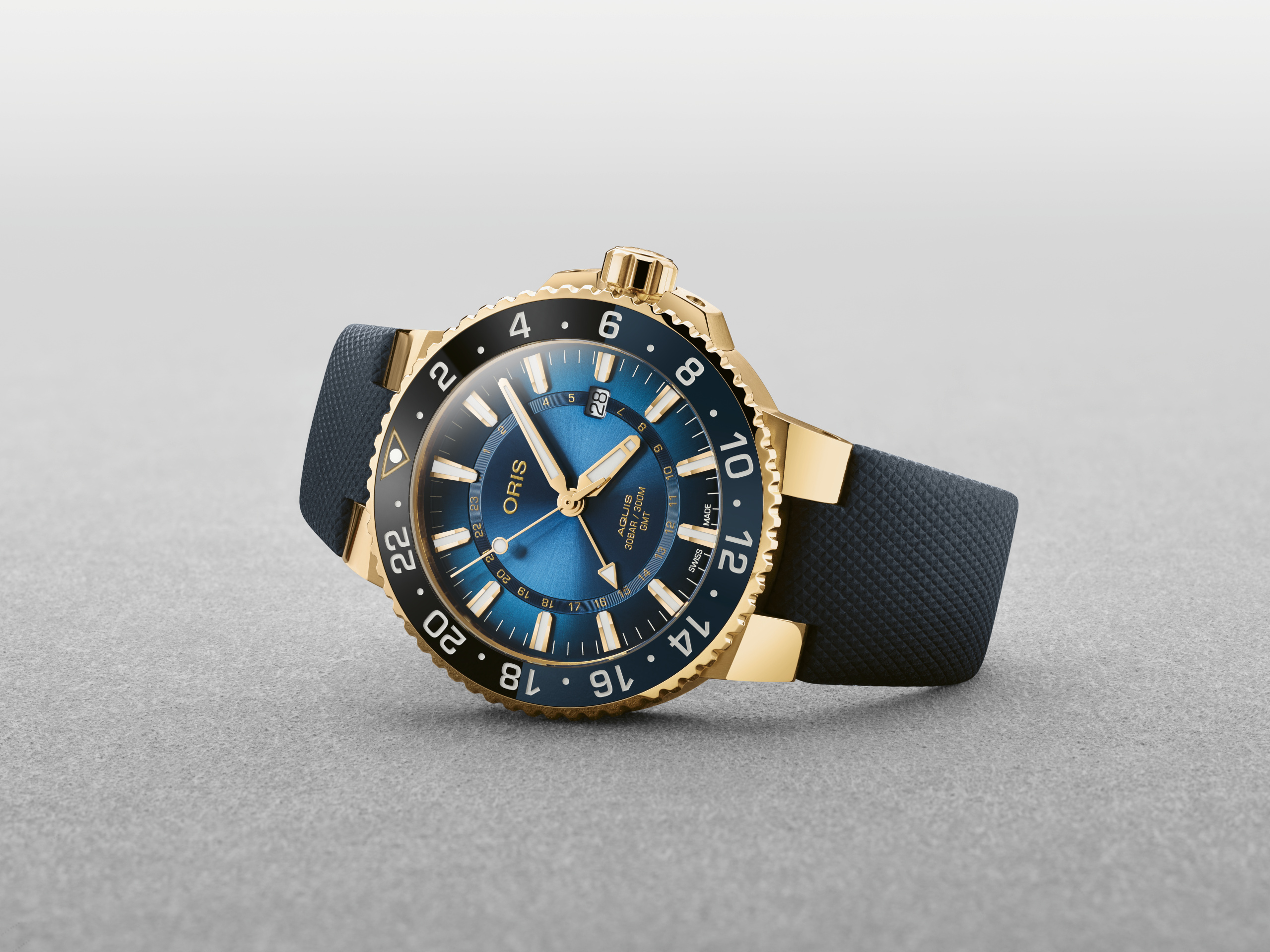 This past weekend at the Ocean Reef Club’s All Charities Weekend,  a special numbered-edition of the all-new Oris Carysfort Reef Limited Edition 18-karat gold watch was included in the event’s auctions in an effort to benefit the Coral Restoration Foundation’s efforts to restore the Carysfort coral reef. (The #2 watch will be auctioned at another big upcoming fundraising gala this spring). Both watches were donated by Oris to the cause of saving the coral reefs. Oris has been involved with the Coral Restoration Foundation for several years now, and its involvement has made an impact on the organization’s abilities to accomplish certain tasks.

I was fortunate enough to join Oris and the Coral Restoration Foundation in one of its first ventures together a couple of years ago in 2017, when we went snorkeling and diving off the Florida Keys to learn first-hand how the Foundation works to source, grow and outplant coral. 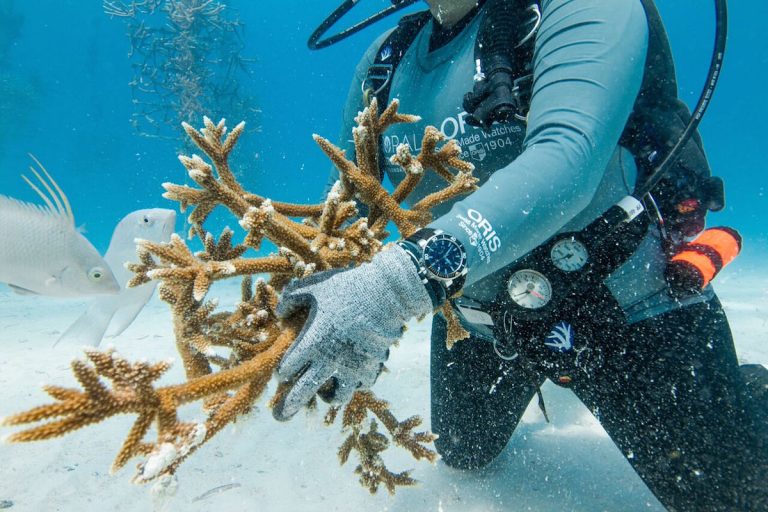 We were invited by Oris to visit with the Coral Restoration Foundation and experience their work first hand.

I was also happy to join Oris during the unveiling of the newest watch benefitting the cause during a recent summit in Vail. The new watch that marks the second edition divers watch Oris has created in cooperation with the Foundation is the brand’s first-ever solid 18-karat yellow gold watch with yellow gold bezel with a black-and-blue ceramic inset. Just 50 pieces will be made, with three of them (#2 ,3, 4) being donated by Oris to the non-profit Coral Restorations Foundation for fundraising. Oris’s partnership with the organization is part of the brand’s commitment to “Change for the Better.”

About the Coral Restoration Foundation and Carysfort Reef

The Coral Restoration Foundation – the world’s leading expert on restoring the coral reefs of the world – has been focused on growing coral and then reintroducing healthy pieces back onto the reefs. The Carysfort watch name is derived from the Carysfort Reef  (part of the third largest barrier reef in the world) in the Florida Keys National Marine Sanctuary nearby Key Largo.

‘The reefs of the Florida Keys, including Carysfort Reef, were the epicenter of the early recreational dive industry in the 1950s and 1960s,” says Martha Roesler, Coral Restoration Foundation’s Chief Development Officer. “But over the last 40 to 50 years, the reef has been severely degraded. Coral populations in the Keys have declined by around 98 per cent. There’s now a critical need for coral restoration on a massive scale to restore Carysfort to a healthy, thriving reef system.” 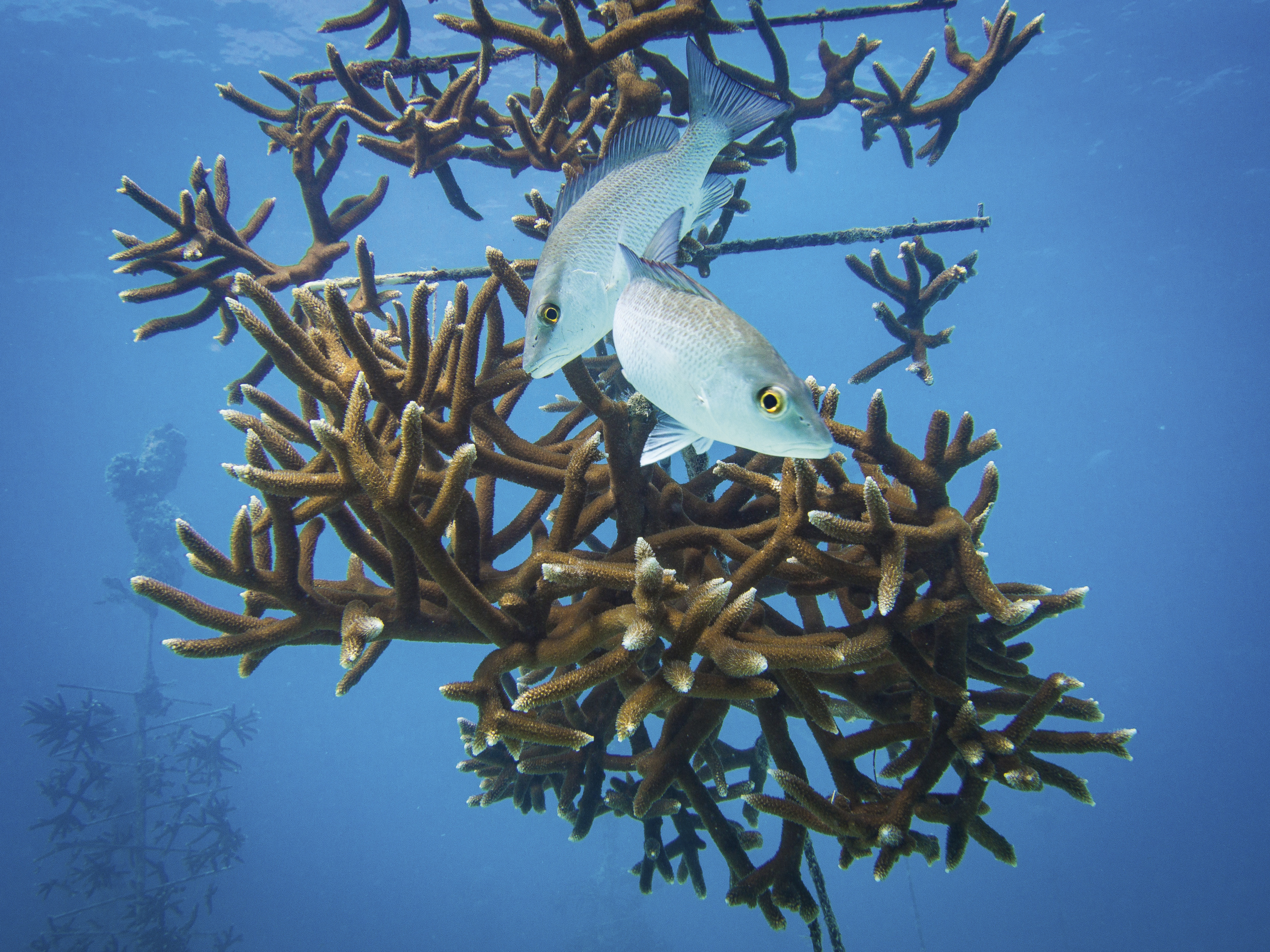 Coral Reefs are essential to the life, as they produce 70 percent of the world’s oxygen.  ‘They’re important for human subsistence, supporting fisheries that provide protein for billions of people. They also form natural barriers that protect shorelines and infrastructure from wave energy and storm surges,” says Roesler, adding that climate change is the biggest threat to the world’s coral reefs. As sea temperatures and levels rise, and as storm patterns change, the reefs experience more acidity than ever. The stress is killing the coral, with certain species (including staghorn and elkhorn) now on the endangered species list.

“Coral reefs are now the most endangered ecosystems on the planet,’ Roesler said in a presentation to journalists during Oris’ recent summit in Vail, Colorado. “Humanity has never before faced the extinction of an entire ecosystem, yet we have lost 50 per cent of the world’s coral reefs in the last 30 years. In the next 80 years, without direct action, all shallow coral reefs could become extinct.” 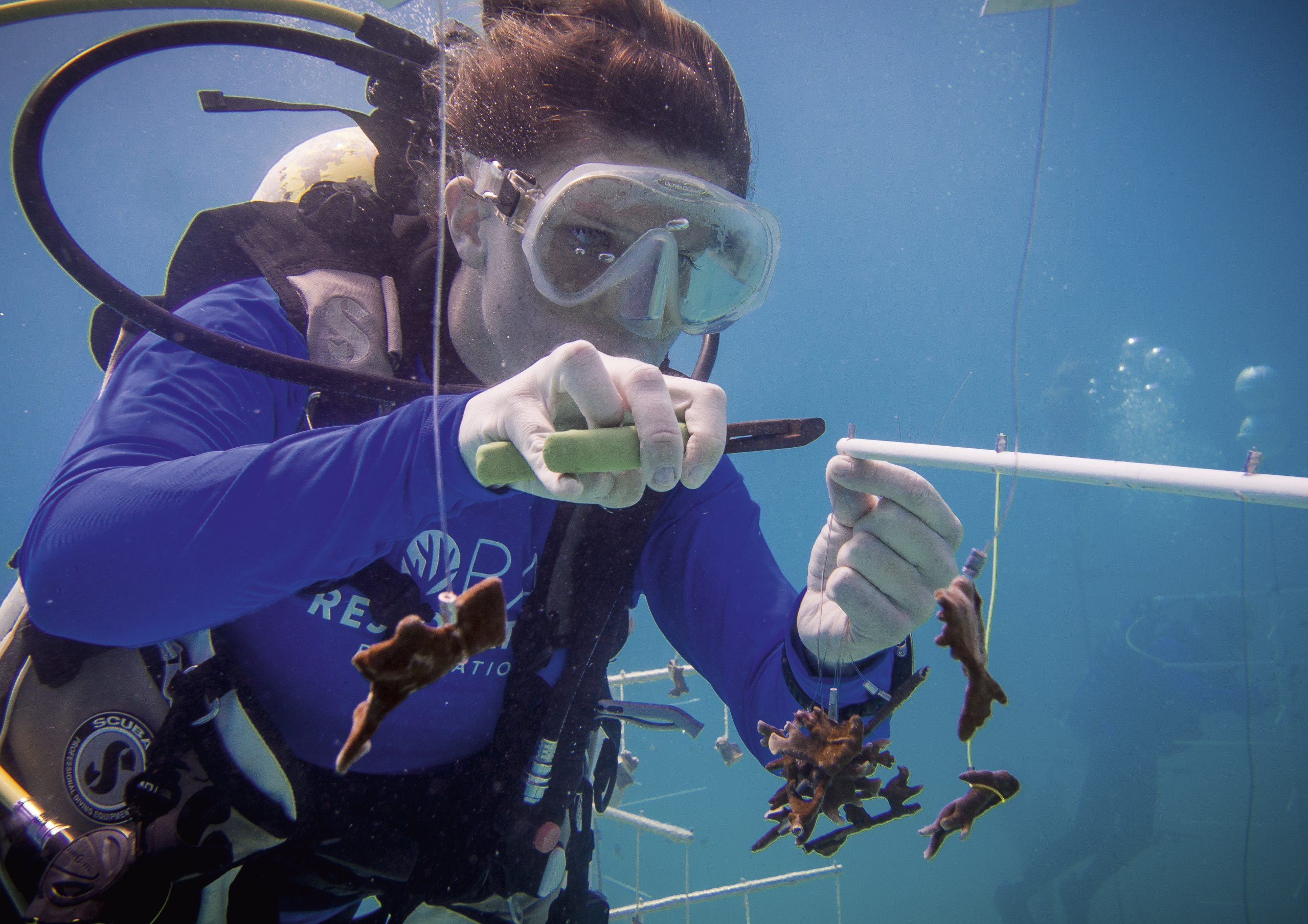 The Coral Restoration Foundation focuses on growing new coral and replanting the reefs. The Oris Carysfort Reef Limited Edition watch will help benefit the cause.

As such, the foundation has developed coral restoration techniques that allow them to restore reefs using corals that they have cultivated via cuttings, careful attachment to underwater coral trees,  propagating them via asexual reproduction, and re-attaching them to the reefs. The Foundation’s  Coral Trees are now widely accepted as one of the most effective methods for growing corals in the ocean. In fact, by the end of this year, the foundation will have outplanted more than 30,000 corals on Florida’s Carysfort Reef.

Oris and the Carysfort Reef Effort 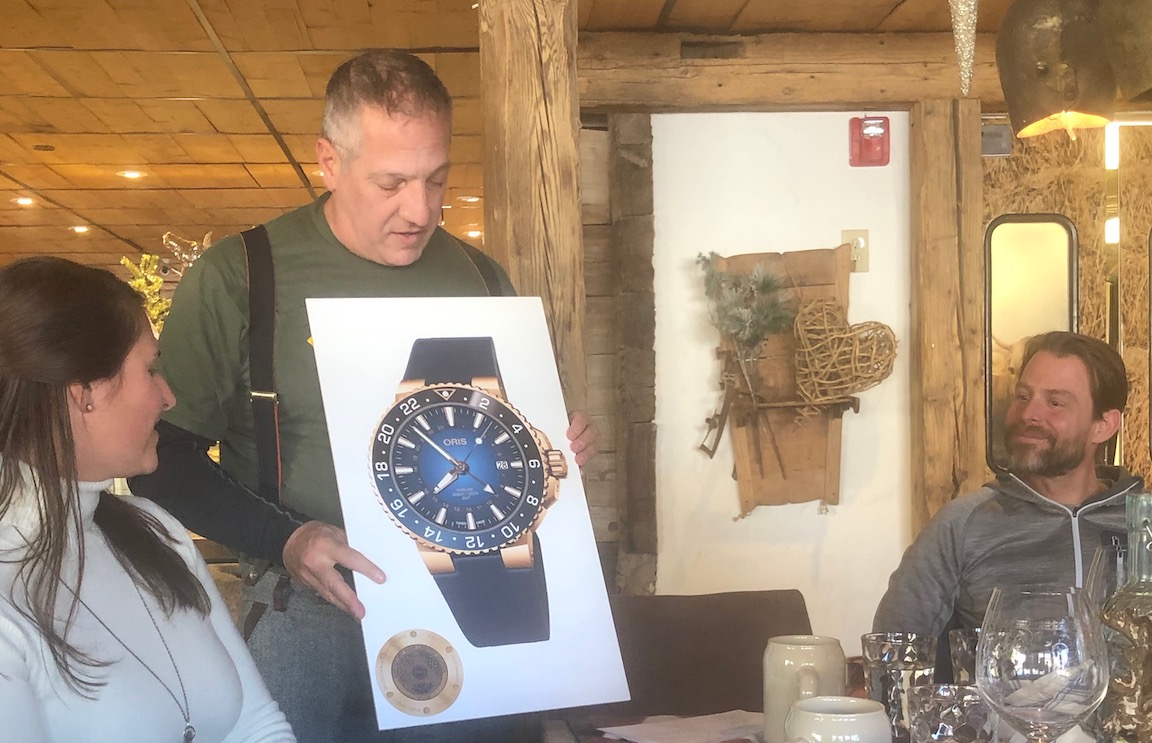 The auction of the three Oris Carysfort Reef Limited Edition watches,  donated by Oris to the foundation,  will raise funds to support the on-going project of restoring Carysfort Reef.  Throughout the next three years, the Foundation plans to restore an area of the reef that is alar large as 17 American football fields. By the end of 2020, it will already have returned at least 30,000 corals to Carysfort Reef alone.

‘This partnership is central to our continuing mission to bring Change for the Better,’ says Oris Co- CEO Rolf Studer. ‘Through the Oris Carysfort Reef Limited Edition, we’re really stepping up our ambitions and our contribution to returning the world’s corals to their original state. It’s a hugely important project and we’re excited by everything Coral Restoration Foundation is achieving through it.’ 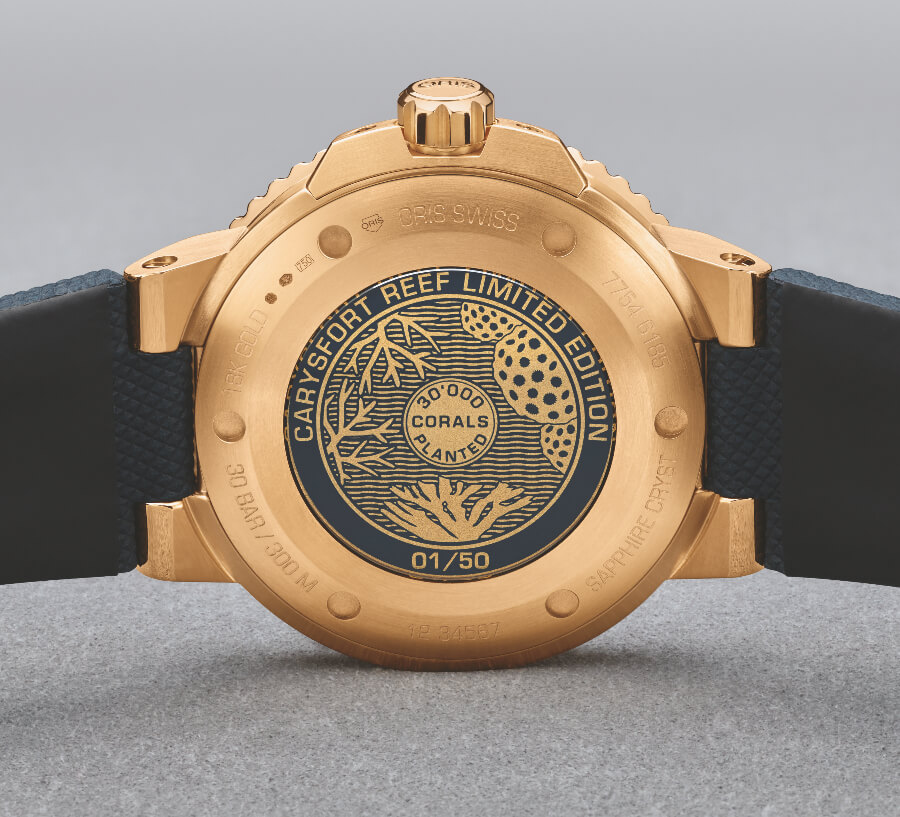 Case back of the Oris Carysfort Reef Limited Edition watch.

The Oris Carysfort Reef Limited Edition watch is an automatic timepiece with GMT function that displays time in three zones simultaneously. A second time zone can be read off of a 24-hour chapter ring on the dial, while a laser-engraved 24-hour scale on the bi-directional rotating bezel can be used to indicate a third time zone. Based on Oris’s Aquis diver’s watch and is water resistance to 300 meters, the watch has a boldly beautiful and wildly functional appeal. As mentioned, it is the brand’s first 18-karat yellow gold watch. Its hands, including the ‘lollipop’ central seconds hand,  are yellow-gold-plated and filled with luminescent Super-LumiNova®. This is a great match to the luminescent-filled markers.

The magnificent gradient blue dial that darkens toward the edges, is incredibly alluring against the yellow gold case. The date at 3:00 is a nice touch and the rubber-coated strap with its subtle texture adds depth and dimension. The solid gold caseback features a sapphire crystal inlay that is decorated with a motif emulating the 30,000 corals planted on the reef by year-end 2002. In all it is a really nice package of form and function — retailing for $17,900. 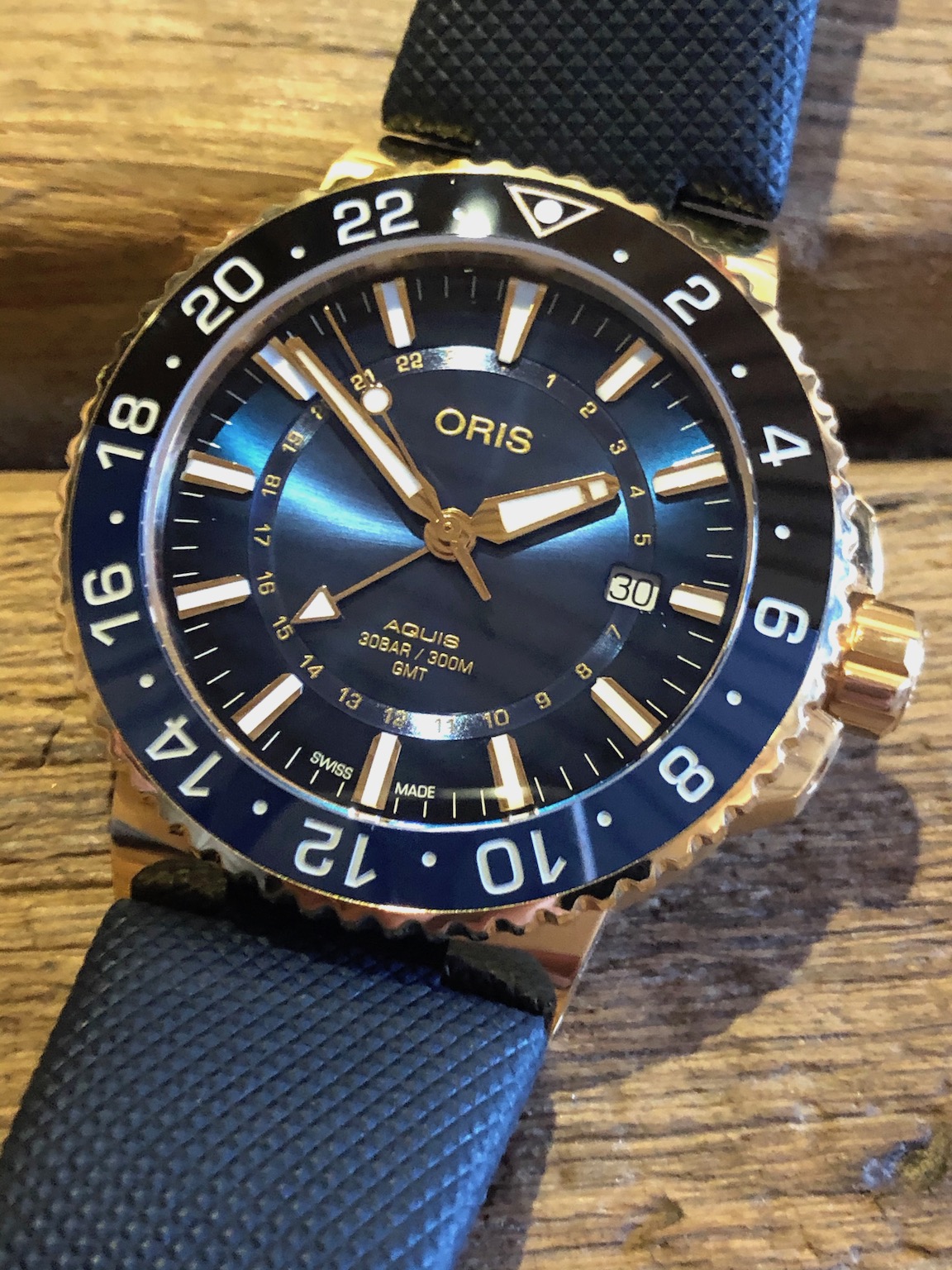