On our Perfect Timing column on Forbes.com, we offer an in-depth look at this  ultra-light-weight Montblanc TimeWalker Pythagore Ultra-Light Concept watch –that weighs in at 14.88 grams (just about half an ounce). The one-of-a-kind watch is dedicated to the brand’s ambassador Lin Dan, world-famous badminton champion and two-time Olympic champion, who helped design the piece – -and it may well be the world’s lightest weight  mechanical watch.

The TimeWalker Pythagore Ultra-Light Concept watch offers hours, minutes, small seconds, and 50 hours of power reserve. It is equipped with an all-new movement, the Montblanc Mechanical Caliber MB M62.48, which is based on the Minerva Pythagore movement from 1943, but has been totally updated. The 153-part movement is skeletonized and features bridges made of titanium — and it weighs just 4.73 grams. As to Lin Dan detailing, there is an engraving at 8:00 that depicts five stars to recall Lin’s five most important wins of the Badminton Grand Slam. The watch is just another example of the pioneering spirit of Montblanc. 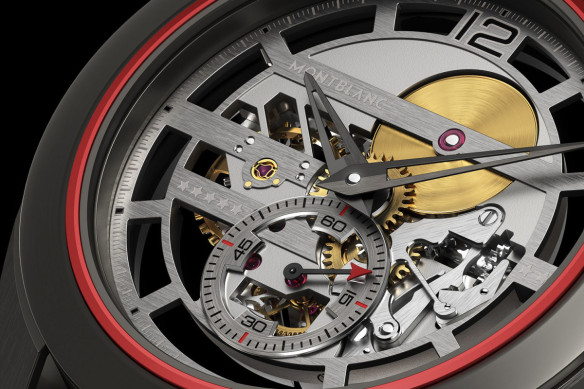 The Montblanc Pythagore Ultra Light Concept watch weighs less than half an ounce.