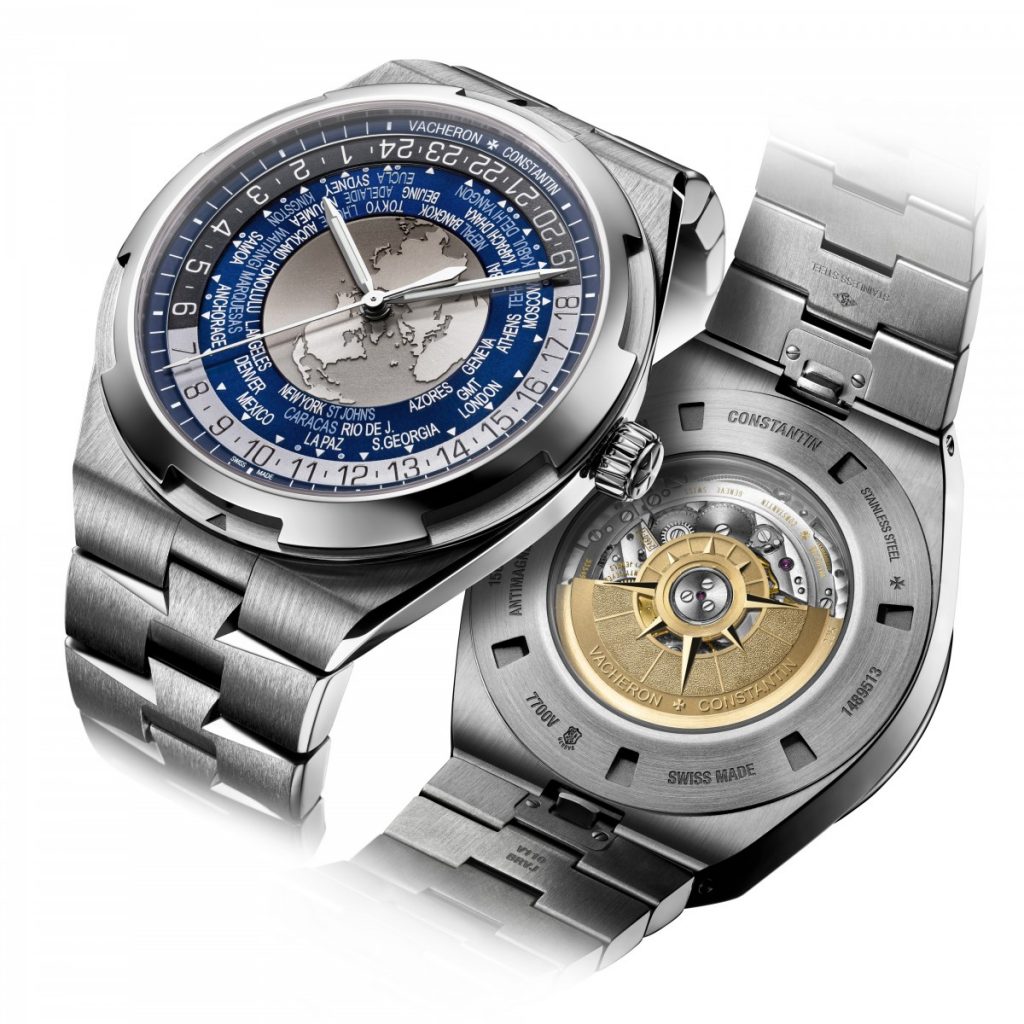 Earlier this year, we had the distinct privilege of introducing readers to the Vacheron Constantin Overseas Tour with famed photographer Steve McCurry.  As the brand has revamped its much-loved Overseas collection, it has also embarked on an around-the-world tour, wherein McCurry travels to a dozen places to bring his perspective on time and travel to new heights in photographs that will be used to help distinguish the new Overseas  collection as a travelers companion. In the first half of 2016, Vacheron Constantin unveiled the first six destinations. Now, the company unveils the second half a dozen locations McCurry is photographing and releases a some of those images.Here we bring you a quick look at those six locations. 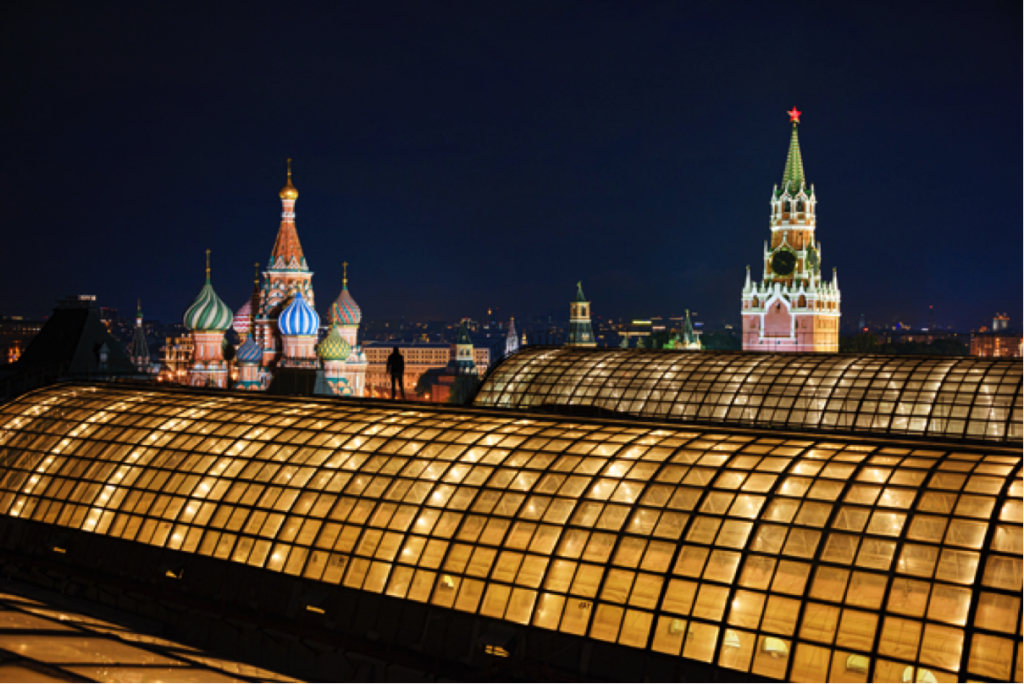 In history, lies our future — and this rich perspective In  comes to life beautifully in McCurry’s night time image standing atop the glass roof of the fully lit GUM building and overlooking Red Square. Built in 1893, the GUM roof, with glass dome with  iron arches, is a monumental architectural feat.  Says McCurry, “Managing to shoot the Red Square from a new vantage point was made possible by the exceptional access granted to the GUM roof. The square topped by colourful steeples thus revealed itself in a truly unique way. Once night fell, this perspective took on a whole new and even more magical dimension when the GUM glass roof was lit up.” 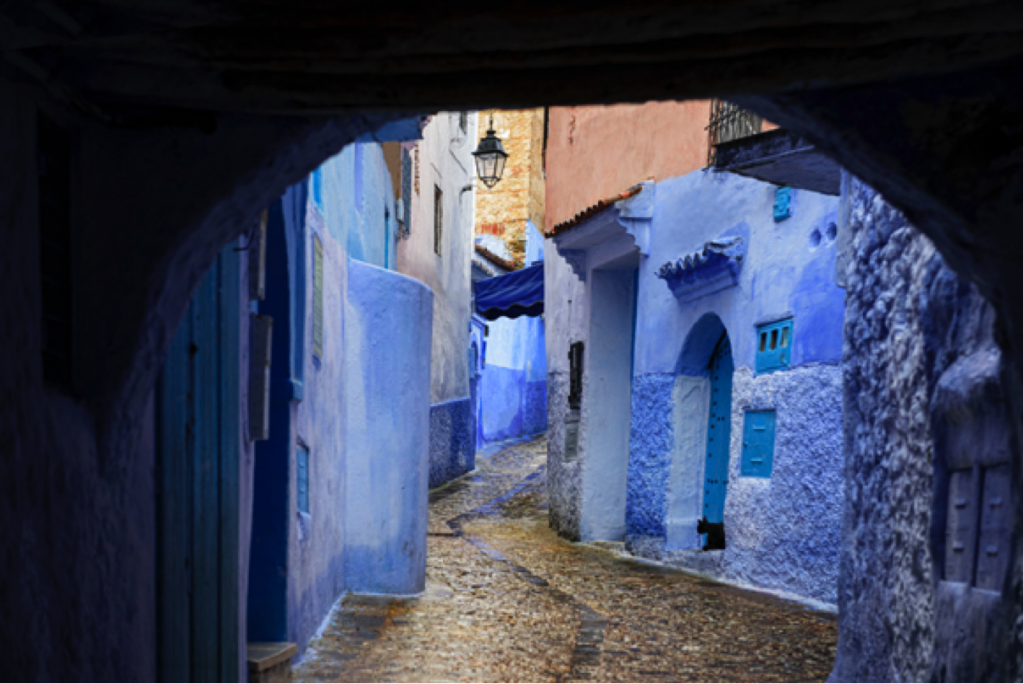 Easily one of those locations that immediately conjures images of romance, daring and beauty, Morocco is a land of unusual distinction. In the city of Chefchaouen, for nearly a century, residents have been painting the town blue, literally, to distinguish the town from any other.  McCurry, who notes that he has visited similar blue cities in India, says, “There is a poetic story likening this blue city to the skies or heaven. Viewing the town at night from further away provides a magical vantage point where the warm-hued lights give a nice contrast to the blue-painted city.” 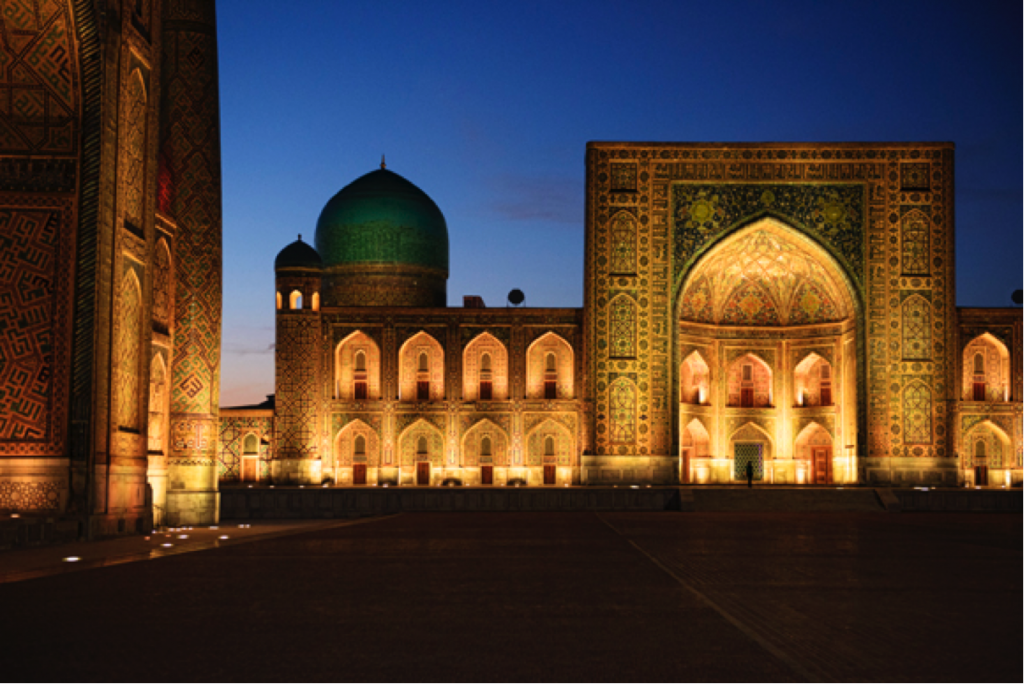 On the Silk Route, heading toward China, lies one of the most ancient cities of Central Asia: Uzbekistan. A highly cultural city, it was inhabited over the centuries by Greek, Persian, Turkish, Mongolian and Iranian peoples as they came into power and influence. The town is rich with mausoleums, ornate domes, and a host of other multi-cultural influences.  McCurry, who had visited the city a decade ago, said, “The timeless architecture still holds just as striking and iconic as it did when it was built around 2,500 years ago. The ornate designs and wondrous colors are a marvel to behold.” 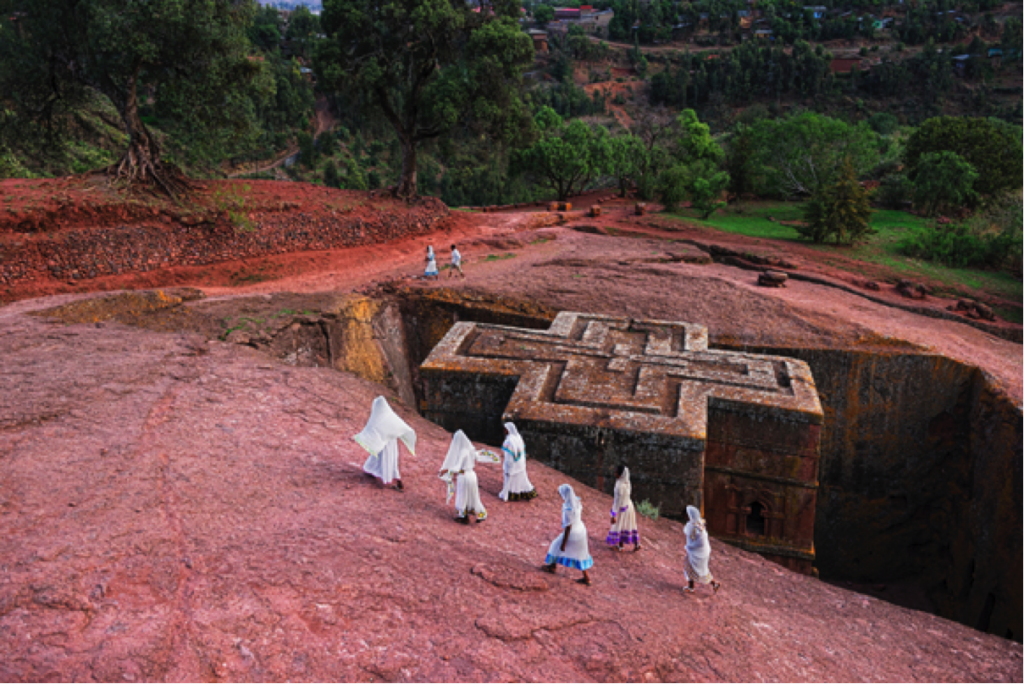 The 11 buildings of Lalibela were carved out of rock at the top of a hill in the 13th century. The city, designed to be a  “new Jerusalem,” even has a carved trench designed to resemble the River Jordan. It is a simple, humble structure. McCurry’s perspective on the site:   ”Lalibela has a great history, and is distinguishable by its churches which are cut out of solid stone from the top down. It’s a unique structure not unlike the pyramids or medieval cathedrals. Though built 700 years ago, this location continues to be a point of pilgrimage today.” 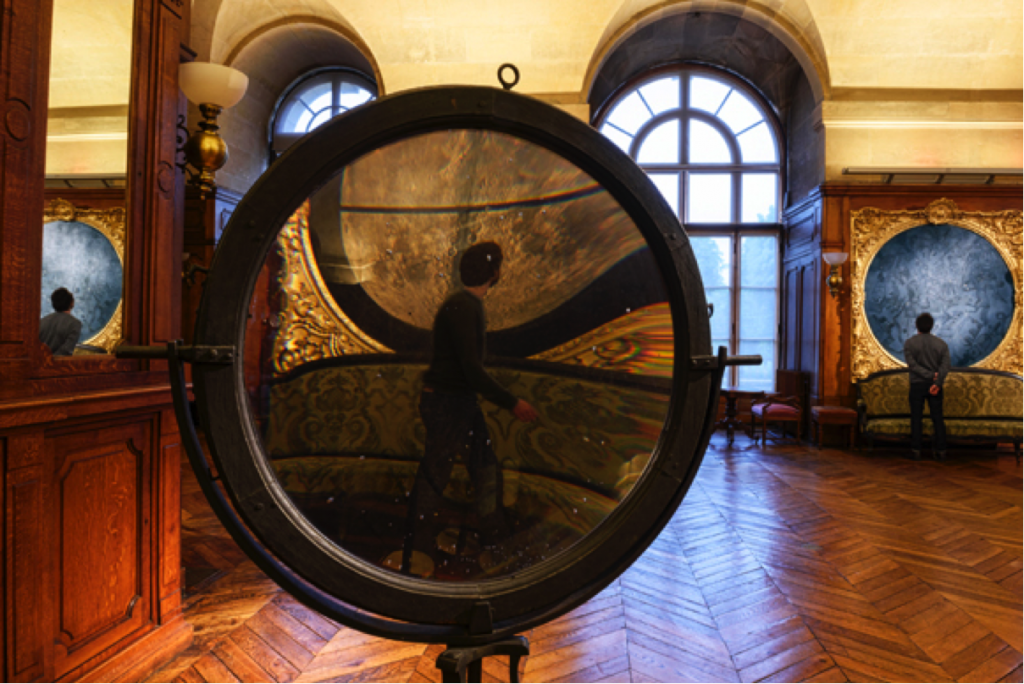 Built in 1667, the Paris Astronomical Observatory is the oldest observatory still in operation. According to McCurry, “This was my first time entering the dome of an observatory. It was fascinating to have the opportunity to visit a place made possible by human curiosity and ingenuity. The Paris Observatory was technologically revolutionary for its time, and is still one of the largest astronomical centers of the world. The Overseas Tour itself is driven by the same curiosity about the world that is at the heart of this location.” 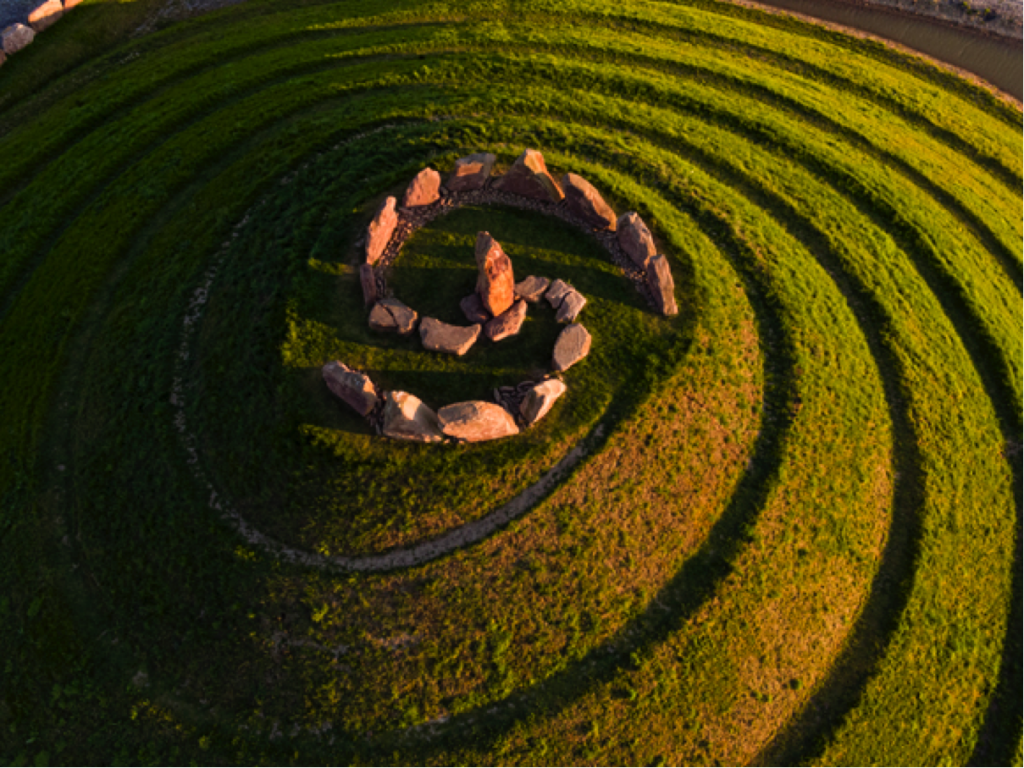 High in the hills of the Dumfries region of Scotland lies the Crawick Multiverse site, wherein landscape artist Charles Jenks has transformed a former open coal mine into a landscape haven. The ecology of the site and the monoliths found there served as the inspiration for this transformation of taking from the Earth to giving back. McCurry’s perspective on this man-made site,”I was previously unaware of this location, and pleasantly surprised by its ancient mystique despite being a new installation. These man-made formations typify Scotland’s great history of similar formations whose purpose are still unknown to us today. There is a cosmic feeling evoked by these structures.”