Cult Watches: A Look At 21 Years Of The Iconic Corum Bubble Watch, Its Roots And New X Ray Version 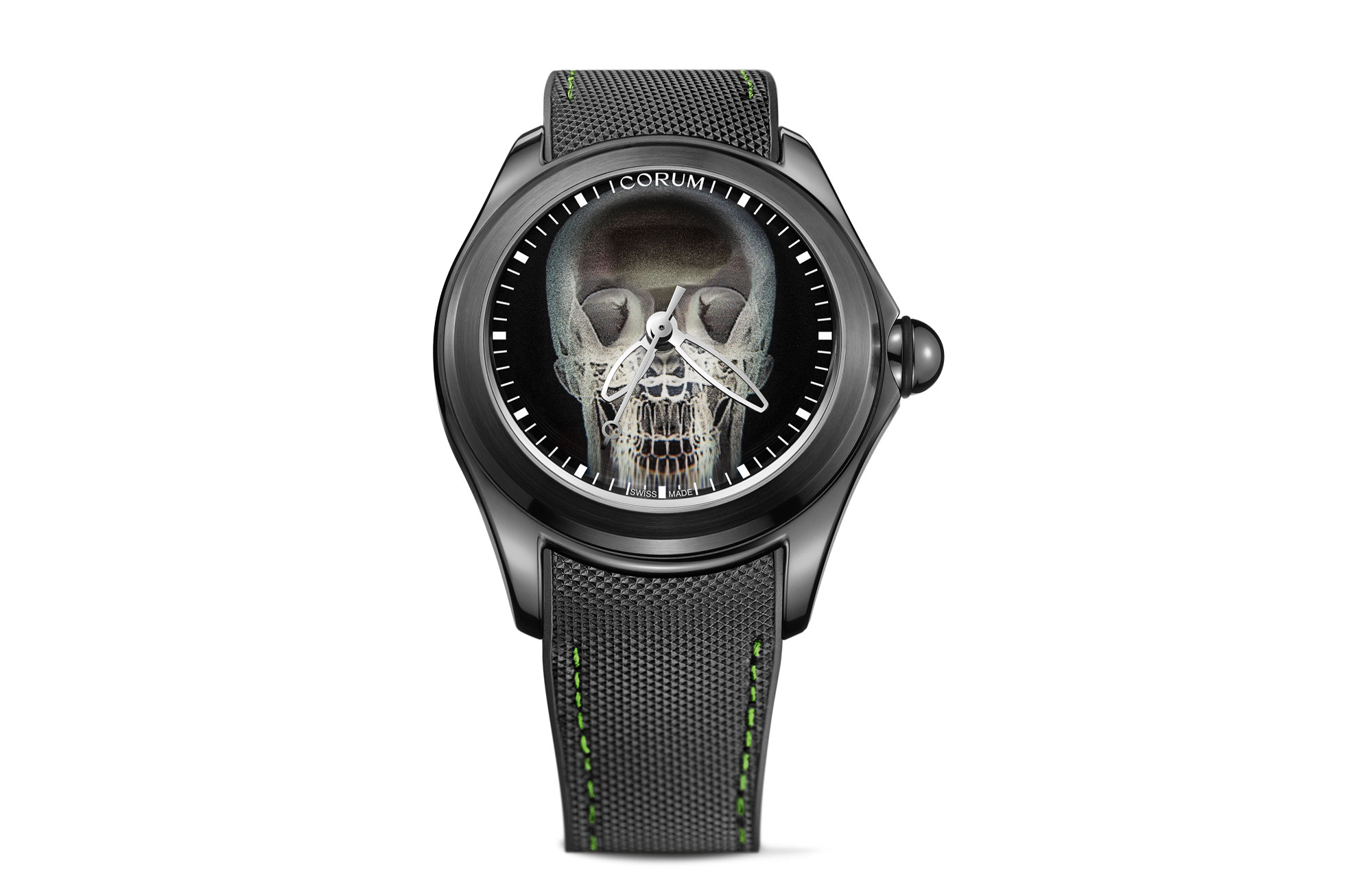 I remember it well. It was the year 2000, and Corum was exhibiting at Baselworld right in the front hall. In fact, the brand occupied the space immediately to the left as you walked into the main entrance of Hall 1. What hit you? The Bubble.  The oversized Bubble watch with huge domed crystal that went on to become a legend of this century made its debut — with a bang. It was not a watch to take lightly and watch lovers either loved it or hated it. In fact, by today’s standards with all the social media, who knows how the watch would have been judged. It took some getting used to, but it met with rave reviews from fans. Now, Corum celebrates the 21st anniversary of the famed Bubble watch with a new X Ray version.

How Severin Wunderman Conceived Of the Corum Bubble

The first Bubble collection was the brainchild Severin Wunderman, a legend in his own rights. He had built the Gucci brand in the United States and then moved on to aquire Corum. Wunderman was a quirky (I think I can say that since I knew him fairly well), passionate man with an astute business sense. He was able to integrate his love of watches with his passions for things like the concept of Dia de Muertos, death and life.  He had, after all, been hidden in a school for the blind during the Nazi occupation of Poland until his family could get him safely out of the country and  into America (at the age of 10) to live with his sister. 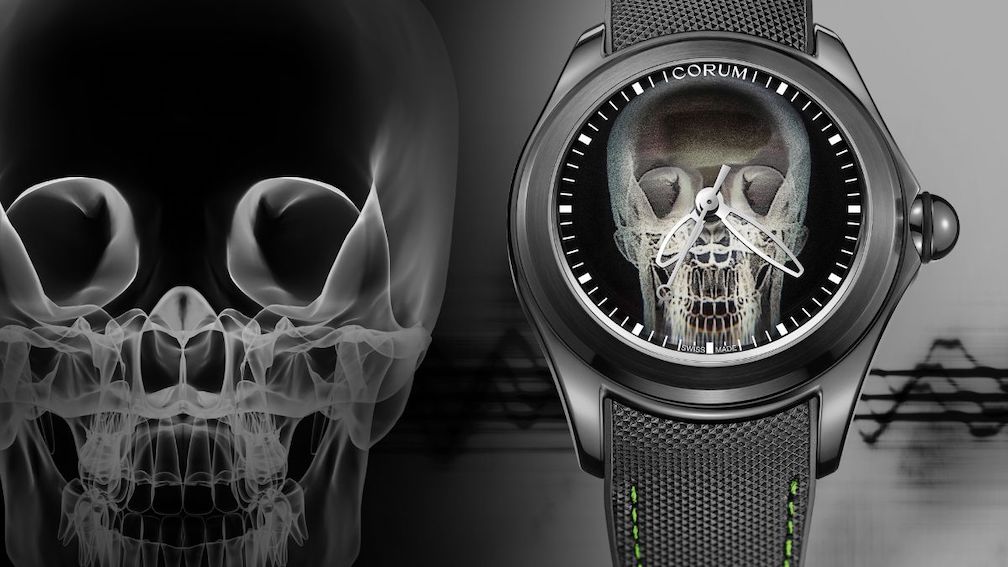 During those years, he developed some odd interests and became enthralled with the unconventional side of everything he did. In watches, that tendency resulted in the first Bubble watches — most of which had skulls or skeletons in the design. In fact, the windows of that first exhibit were maybe even more enticing than the watches themselves, as they were also bedecked with skulls, pirate’s swords, skeletons and more — much of it from Wunderman’s own collection. When he conceived of the Bubble watch, his goal was to disrupt the watch industry — a goal he accomplished.

When the 44mm Bubble was released, Wunderman said he was inspired by an experimental diving watch from the 1960’s that had an enormous, curved glass. He paired that domed look, which also had some distorting effects, with creative themed dials, and the rest, as they say,  is history. The Bubble fast became a new millennium icon, with a variety of intriguing renditions released over the years that included the Bubble Jolly Roger, to Bubble Lucifer, Bats and more. Throughout the past years, Corum has even worked with individual artists for collaborations on Bubble dials. 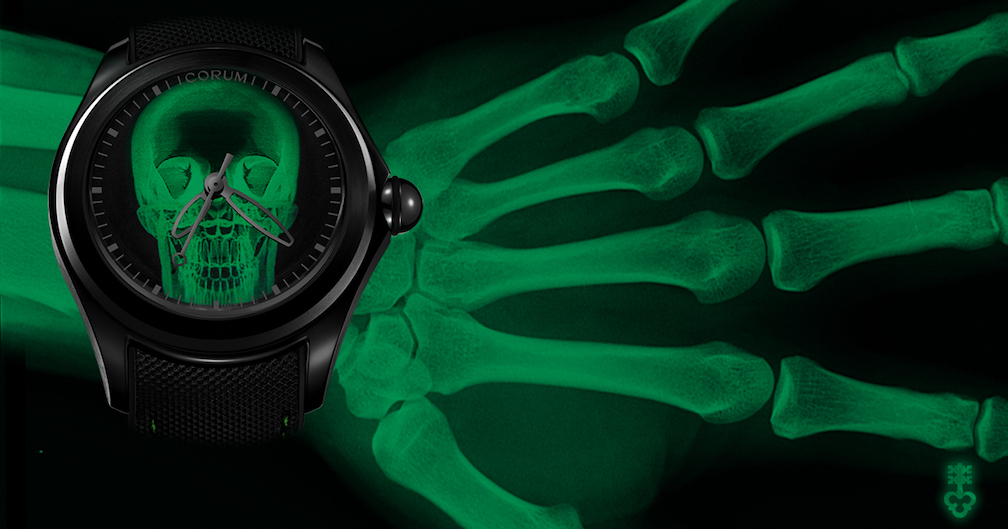 “Now, to honor the both the revolutionary Bubble and the dynamic man who conceived of it just over 20 years ago, Corum releases a limited-edition watch with the same signature elements that made the Bubble famous, but with a contemporary and creative touch. The Bubble X Ray pays tribute to the line’s roots with a highly stylized yet realistic look skull taking center stage on the dial. While the huge domed sapphire crystal slightly distorts the image, it is fully visible in the dark because it is totally luminescent: disruptive in day and at night.

The watch is powered by an automatic movement (CO 082) that beats at 4Hz and offers  42 hours of power reserve. It is crafted in stainless steel with a black PVD treatment over it and boasts a sapphire case back for viewing of the movement. Both the domed front crystal and the back crystal are coated with an anti-reflective treatment. Bringing the luminescence full circle, Corum adds fluorescent  green  stitching to the synthetic alligator-like strap that is lined with rubber. Water resistant to 100 meters, the 47mmm case offers hours, minutes and seconds and is being created in a limited edition of just 88 pieces. It retails for $4,000. 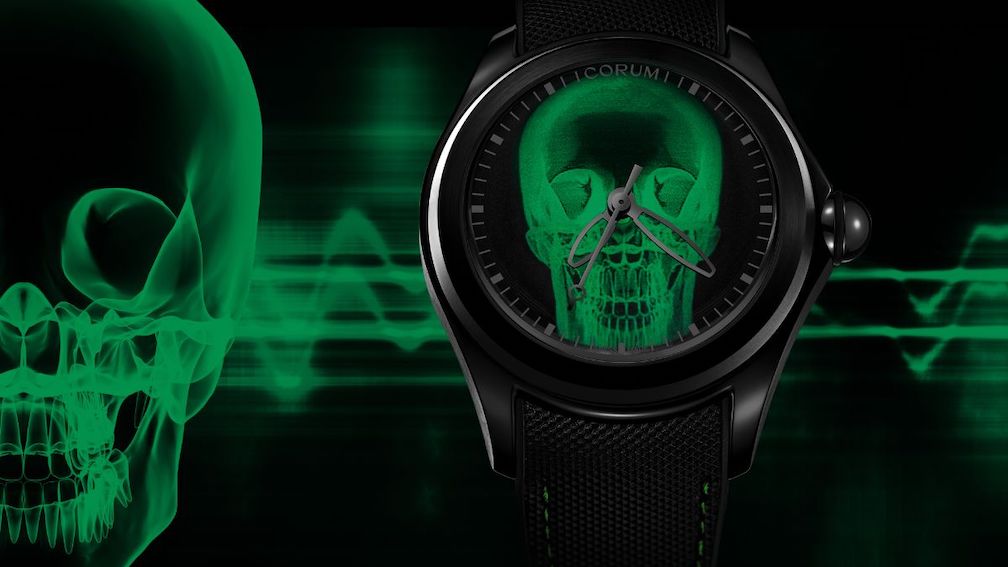 Corum Bubble X Ray watch is being made in a limited edition of just 88 pieces.

Crafted with the same attention to detail and top-notch watchmaking, the Bubble X Ray perfectly embraces the original concept of the Bubble: daring, different, and designed for those who enjoy making their own distinctive statement.”